Zarah Hussain: ‘I don’t think something that’s spiritual precludes the use of technology’

Zarah Hussain: ‘I don’t think something that’s spiritual precludes the use of technology’

Zarah Hussain (b1980, Cheshire, UK) places her work at “the intersection of science and spirituality”. She combines a lifelong fascination with – and extensive training in – hand-drawn Islamic geometry with the latest digital software to create hypnotic, looping animations made with code. Her work also encompasses apps, paintings and sculptures

Her largest work to date, Numina, won the People’s Choice Award at the Lumen Digital Art Awards in London in September 2017 – gaining more public votes than any other work that has been nominated in the award’s four-year history. The installation combines an eight-minute long sequence of animated 12-fold geometry projected over a sculpture of 42 rhomboids with a simpler hexagonal geometry. It was originally commissioned by the Barbican and inhabited its foyer from October 2016 to January 2017. Since that point, her career seems to have gained momentum, with representation by the Hopstreet Gallery in Brussels, and further exhibitions scheduled for 2018. 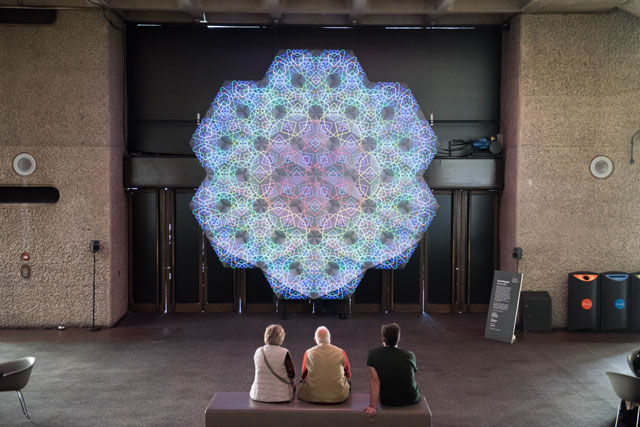 Hussain, who had an early passion for maths, geometry and art – encouraged by a secondary school teacher – initially pursued a professional career in the media. She joined the BBC in Manchester, after gaining a degree in English and history at Manchester University. It was while researching an article for the BBC that she came across the Prince’s School of Traditional Arts in London, and realised that here was a chance to unlock the geometric, sacred and historical secrets of the ancient art form of traditional hand-drawn Islamic geometry that had fascinated her since childhood. Gaining a full, paid scholarship on the strength of her portfolio, she moved to London and underwent two years of rigorous training to gain her master’s in 2004. 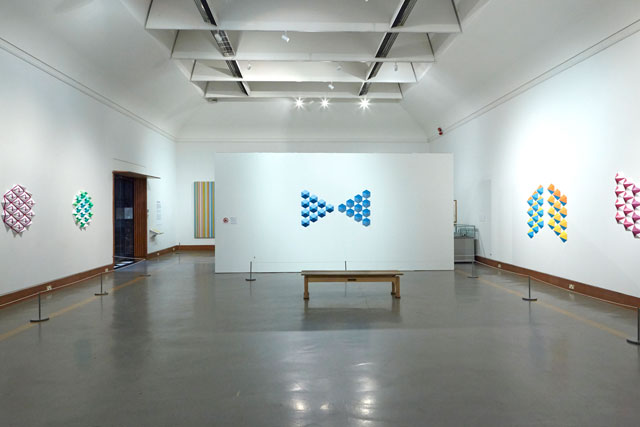 She slowly built up her profile with individual commissions and group exhibitions around the UK, and combined her art practice with freelance media work until 2011. In 2014, she was given a solo sculpture show, Symmetry in Sculpture, at Birmingham Museum and Art Gallery, which was extended twice thanks to public interest. 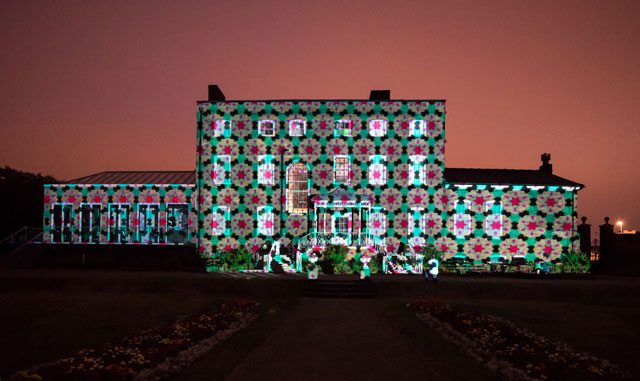 For the Islamic Arts Festival in the Sharjah Museum in 2015/16, Hussain presented Sharjah Spectrum, a large-scale installation with digital animations on three walls that allowed viewers to choose the colours, using their mobile phones. She also projected her animated geometry over the exterior of the William Morris gallery in 2015. Entitled Magic Carpet – in tribute to Morris’s own Asian and Islamic inspirations - this same animation provided background visuals for the Transcender music festival at the Barbican.

Hussain relishes the prospect of collaborating with those at the cutting edge of technology. She is currently hoping to develop a work using programmable LEDs, creating sequences incorporating the five daily prayers recommended for practising Muslims (timed according to the solar calendar, the schedule shifts throughout the year). She sees her interest in sacred geometric art – derived from the shapes, patterns and calculations in nature and astronomy - mathematics and data programming as highly compatible elements, which resonate strongly with her own personal beliefs in universal connectivity.