Five of Innes’ paintings form the inaugural exhibition for the Ingleby gallery’s new space, an austere building formerly used for worship that has been beautifully refurbished. Together, the art and architecture provide a fitting 20th-anniversary celebration for the gallery 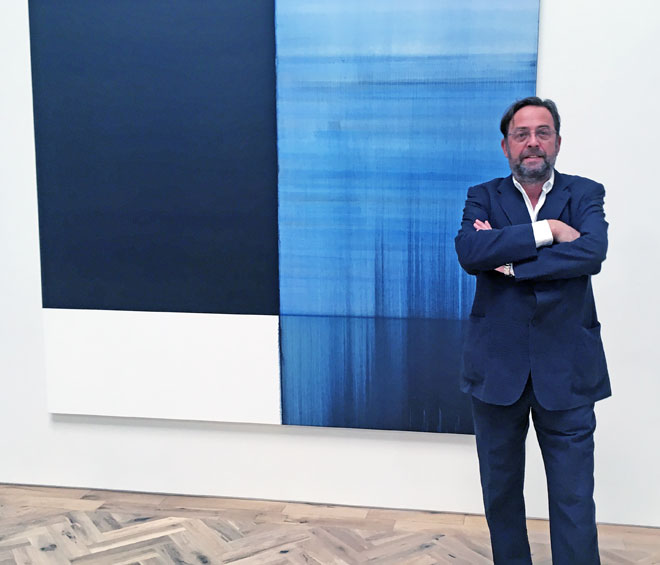 There is a timeless gravitas to the new Ingleby Gallery space in Edinburgh, the leading commercial contemporary art gallery in Scotland’s sober, stately capital, whose buildings often seem carved out of the very rocks on which they sit. Now occupying the 1830s Meeting House that was built for the Glasites – an uncompromising breakaway group from the already austere Church of Scotland – there is such scale and heft to the stone slabs in the entrance stairs and hallway, such thickness and texture to its age-weathered walls, with their dour but atmospheric burnt-tobacco hue, it makes the big reveal of the main gallery space all the more striking. This high-ceilinged room is where the Glasites worshipped, spending entire days cocooned, effectively, in a windowless cave. It has been transformed with a smooth coat of white paint to complement the warmth of the parquet flooring, while the decorative domed rooflight in the ceiling - the worshippers’ only source of illumination and ornament - has been stripped of decades of bird droppings and now gleams softly overhead. It acts, apparently, as it was intended: as a sundial, whose beams track around the room to mark off the hours spent in reverence and repentance. 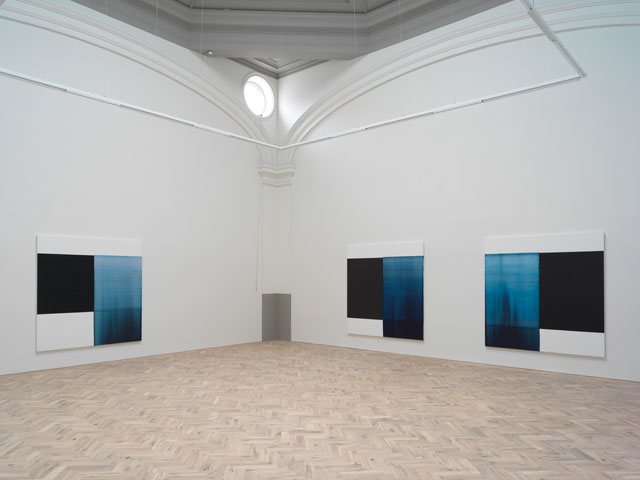 Five of Callum Innes’ meditative Exposed Paintings form the inaugural exhibition for this space – Byzantine Blue, Delft Blue, Paris Blue – a fitting 20th-anniversary celebration for gallerists Richard and Florence Ingleby, given that he was present at their opening show in 1998. His deceptively simple, geometric works strike an appropriately calm, contemplative note. His well-established method of applying and then subtracting paint – in this case, loosening the oils with turpentine, and allowing serendipity as well as craft to dictate what patterns and striations emerge – speaks of long hours of patient labour, a stripping out of what is deemed unnecessary. These are the largest works Innes can make, given that his method depends on the smooth movement of paint across canvas, – one sweeping gesture, no more than an arm’s length. 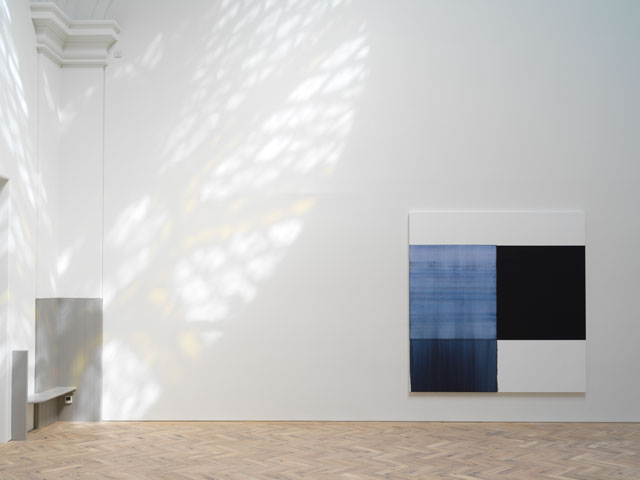 Where his watercolours can be quite ethereal, with colour removed as soon it is applied, the works created for this show continue a shift towards heavier layering. He tells me at the opening: “There are maybe eight layers that have been painted on them and then removed, so they have a history. And I like the idea that things have an intrinsic history.”

Innes (b1962, Edinburgh) talks about the fragility of his work, but these are both heavy and light. The black sections are dense, impenetrable, as are the unpainted oblongs of white linen, while the intensity and hue of the blue varies only slightly from panel to panel, from one work to the other. The eye and brain seek meaning in those graduations between dark and light, looking for variety and differentiation in the face of such apparent similarities. 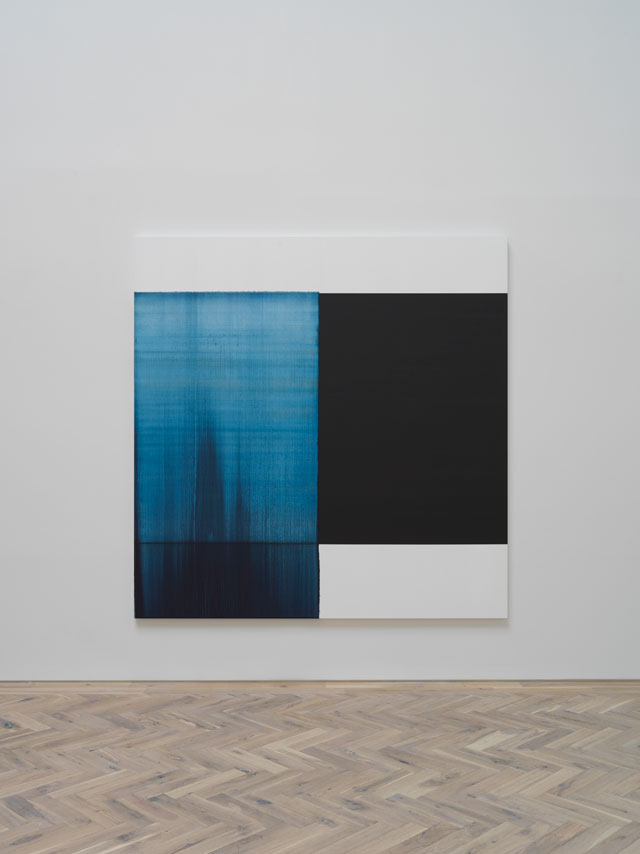 Confusingly, the works in Innes’ Exposed Paintings are named after the pigment he uses, and not numbered. In this show, there are two Oriental Blues, two Delfts and one Paris. One Oriental Blue (2018) is paired with one of a Paris Blue (2018) on the right-hand wall, an arrangement that sets off interesting resonances, given the similarities in their structure. Subtle differences in colouring are seized by the meaning-making part of the brain; to my eye, they evoke a dawn sky in the lighter, Paris Blue and the creeping shadows of dusk in the Oriental work on the left. As the eyes adjust to the graduations of luminosity, new depths and associations emerge – the lower panel of Oriental Blue, in its saturated intensity, attains a lustrous depth the longer you stare, evoking still lakes at midnight. 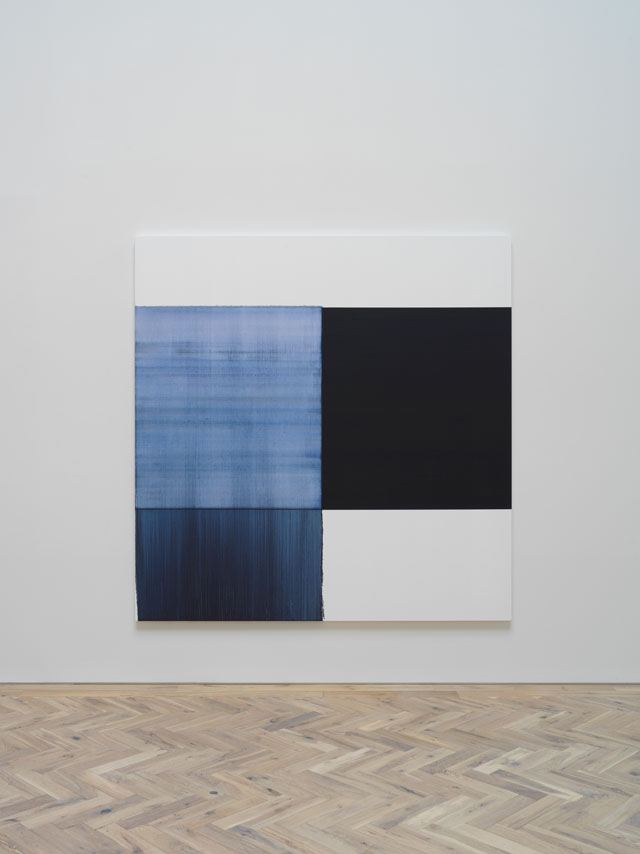 With the densest blues always concentrated in the lower part of all the works, the eye is tricked into imagining architectural elements – the tapered feathering of pigment in the upper part of Paris Blue, for example, evokes the spindly spires of Gothic cathedrals as seen through an inky mist. I ask if these structural spectres are intended? Innes deflects my enquiry with a story about a show of his in London where he changed the tones of his paintings at the last minute, from grey to black, and thus they became intensely “urban”. “Everything that pertains to be minimal of course is not,” he says. “The way the eye works, it goes to the painted area, then the white, then the feathering. Something simple becomes complex.”

He knew this building before its transformation – his studio is just up the road - and visited it with the Inglebys before they took on the lease. He was worried about this previously oblong chapel being turned into a cube (it is now a 9.5m square, with the Glasites’ hefty wooden pulpit and pews hidden away behind one of the false walls). “I always think when somebody makes a white cube, a lot of the time they’re really horrible. This has a really nice fragility about it. It works really well.” He tells me a trick he uses - perhaps to subvert the orthogonal blandness of the classic white cube - saying: “My verticals are not quite vertical. They’re slightly off. It makes them active.” 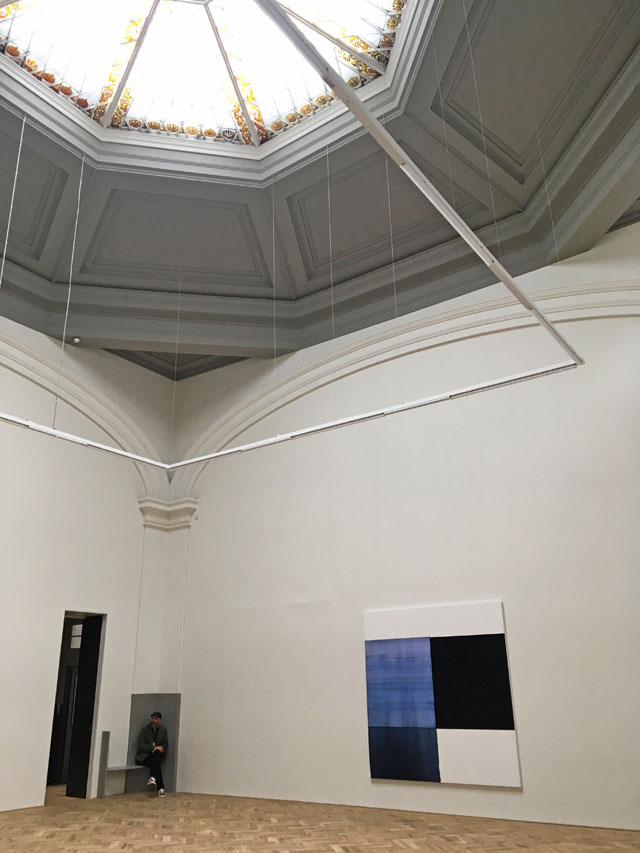 The Glasites’ marathon, all-day prayer sessions used to be broken only by a bowl of kale soup, eaten at midday in their “feasting room” on the first floor. But when I suggest to Innes that the paintings have a durational, reverent quality that is in sympathy with a place of such devotion, he is not so sure. “Yes … Maybe. It’s nice of you to say that.” Then, he parries with a story about a show of watercolours he was planning in New York years ago, where he invited author Colm Tóibín to write something in response (water | colour at the Sean Kelly gallery, 2010). In the end, his watercolours were paired with fragments taken from the story Tóibín composed (also called water | colour), about a grieving woman, which was all about light and mourning. That contemplative pairing apparently brought many visitors to tears.

As for the Ingleby, he says: “I think it’s nice that the building has another life. It’s maybe good that now people come in and pause in a different way. People so often go to museums and galleries and they go through the space without looking. This space will make you pause. For me, that’s art and architecture at (their) best.” 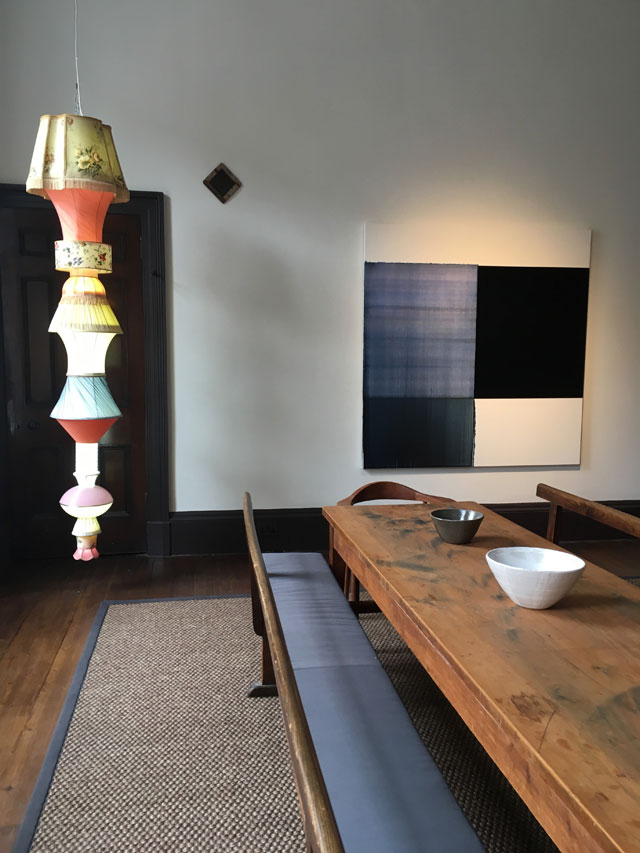 Upstairs in the feasting room, now exquisitely refurbished by the Inglebys – more dense, painterly greys on the walls, burnished dark floorboards – the original feasting table has been restored and richly waxed, the long benches that flanked it are now upholstered. On it, and all around it, are works from the Inglebys’ favourite artists and ceramicists, from Katie Paterson to Andrew Miller, as part of a supplementary show called TWENTY, celebrating this 20th anniversary. These elegantly arranged interiors coupled with the building’s Gothic and introspective envelope conjure an ambience that serves to make the art shine even brighter. 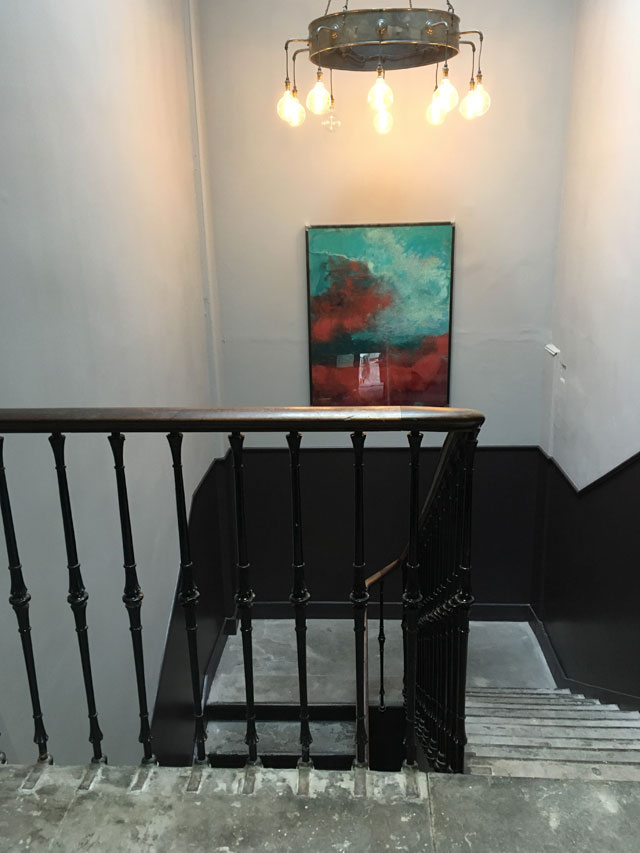 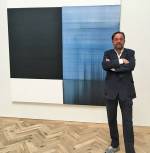 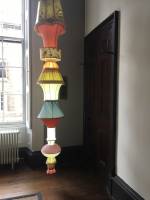 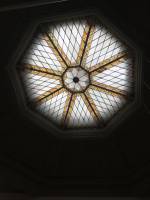