For the duration of the summer, visitors to the liquid city of Bruges are invited to ponder a more metaphorical interpretation of this notion of fluidity, thinking about how the city – and they themselves – might adapt in the light of the growing conviction that change is the only permanence 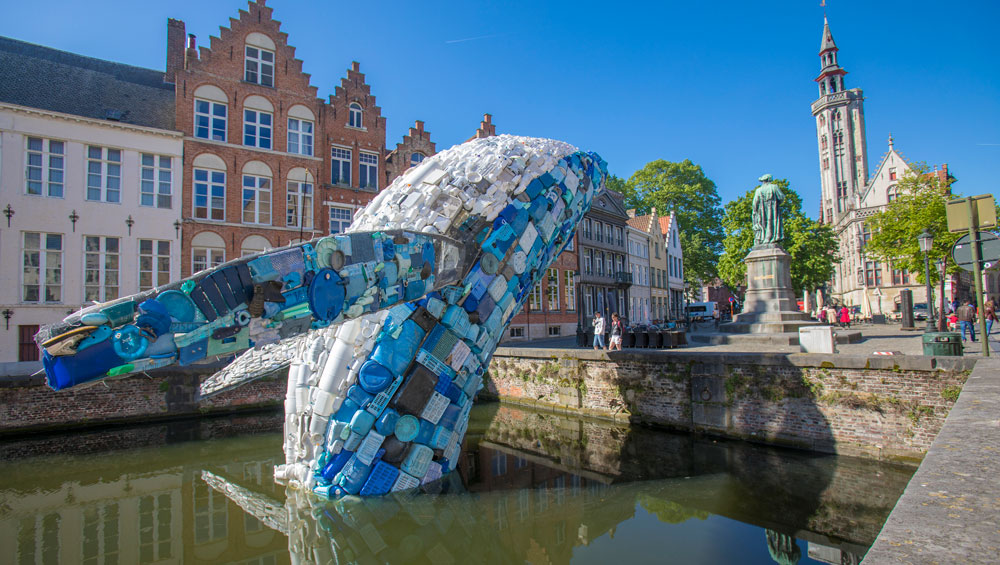 Having been resuscitated in 2015 for the first time since 1974, this second of the contemporary iterations of the Bruges Triennial, curated once again by Till-Holger Borchert, director of Musea Brugge and head curator of the Groeningemuseum and Arentshuis, and Michel Dewilde, curator of visual arts at the Cultural Centre, Bruges, with invaluable support from Els Wuyts, takes the title of Liquid City. There is a double meaning to this, in that Bruges, of course, is itself a liquid city, known as the Venice of the North for its picturesque canals, but questions are also raised, by the curators and the artists behind the 15 works of public art on display, about how a historic city such as Bruges might become metaphorically liquid, flexible and resilient in an age when nothing seems certain and established ways of thinking are increasingly coming under pressure. The concept itself derives from the Polish sociologist and philosopher Zygmunt Bauman (1925-2017), who wrote of a “liquid modernity” and “the growing conviction that change is the only permanence, and uncertainty the only certainty”.1

The artists participating come from around the world and bring with them points of view that open up exciting dialogues as visitors follow the trail – or wend their own way – from work to work, along the waterways, through the cobbled streets, into the peaceful almshouses, exploring and admiring the temporary installations.

After winning the Silver Lion at the 2016 Venice Architecture Biennale, the founder of NLÉ architects, Kunlé Adeyemi, from Nigeria, has brought a third version of his floating school and sited it on the Minnewater – Lake of Love – offering a classroom, exhibition space and a place for meeting, sitting and talking about alternatives for the future. 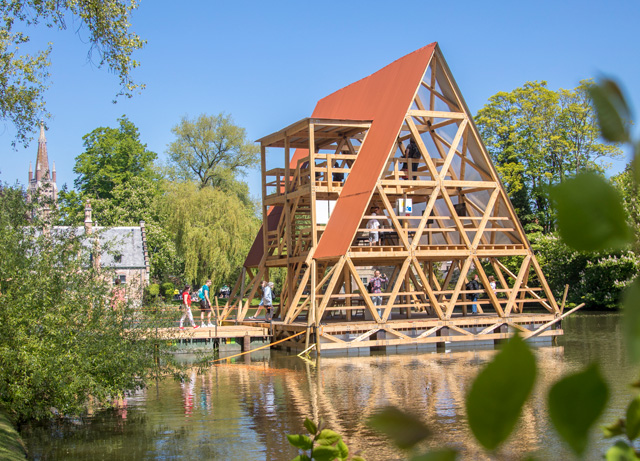 It is an open space, offering beautiful views, an oasis where lessons have taken place, and where locals and visitors alike come to sit and relax, chatter and think. The design is a prototype of a structure set to meet our changing physical and social needs in the light of, for example, climate change. 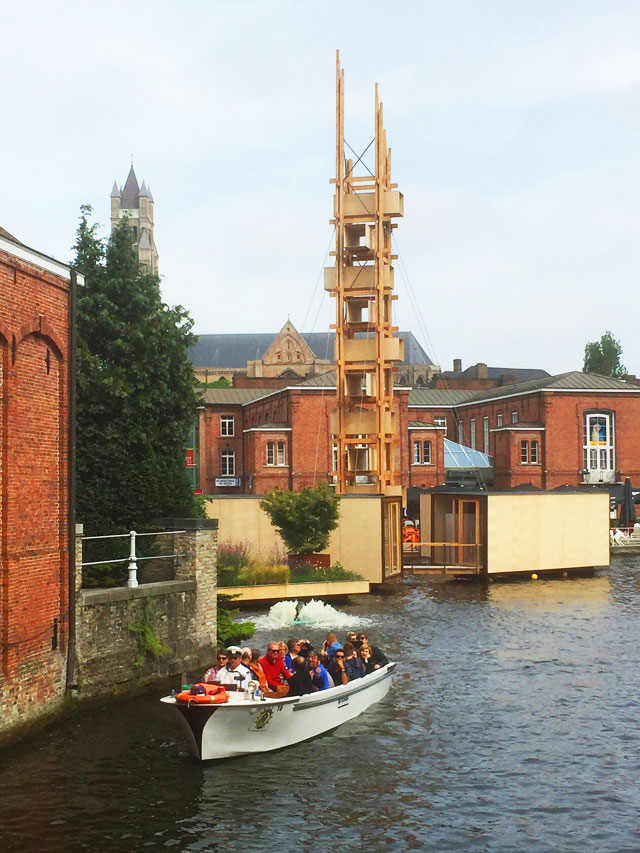 Another proffered solution to this universal problem comes in the form of Infiniti23 by local artist Peter van Driessche. Reminiscent of Metabolism, a postwar Japanese architectural movement in which capsules were piled up to form tower blocks, the individual rectangular units in Driessche’s scale model of a “vertical living space” are designed to detach and float off as water levels rise due to melting polar caps. The name, Infiniti23, reflects the fact that the tower never ends and can be continuously added to. The work is cleverly situated at Bakkersrei, at the Oud Sint-Jan congress centre, where visitors can get a perfect view of the three iconic Bruggian towers – the Belfry, the Church of Our Lady and St Saviour’s Cathedral – with this creating an ominous fourth.

Another Belgian artist, Wesley Meuris, has built his structure in the heart of the city, on the Burg Square. An open pavilion, made of wood and glass, and placed diagonally so as to invite people in from all angles, offers suggestions for a model of better living, with texts on the walls that might act as catalysts for discussion, including juxtapositions of such concepts as: “preservation of historical buildings and neighbourhoods” and “luxury shopper’s paradise, offering everything a discerning buyer could possibly want”. 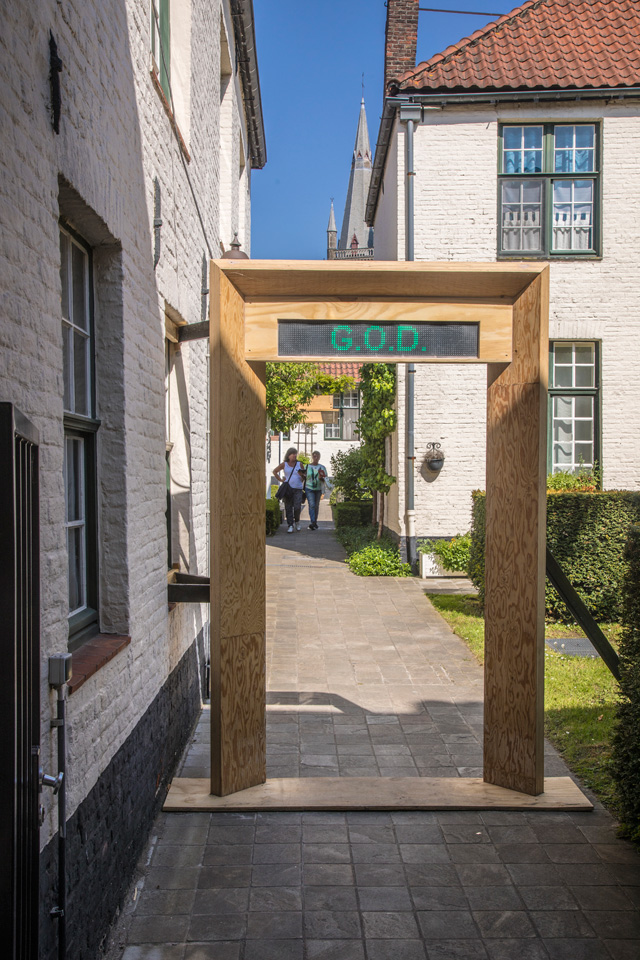 Towards the edge of the city, within the quiet courtyard of the Saint Trudo almshouses, the off-duty Belgian architects that comprise the Ruimteveldwerk collective similarly invite visitors in to a participatory project exploring boundaries and silence. Their work G.O.D. offers an offline space, like a sacred chapel, asking outsiders in to enjoy the peace and sanctity, but thereby running the risk of destroying the very values it seeks to promote. 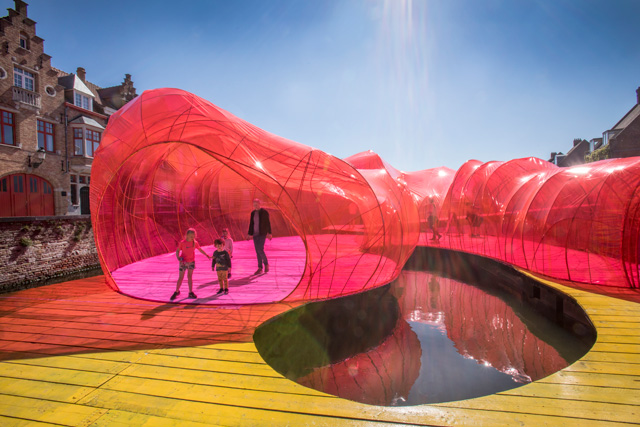 Spanish architects SelgasCano’s pavilion stands out from afar with its glowing orange and pink curved walls, reflecting equally in the glass exterior of the modern archives and the water itself. The Floating Island by the Korean architectural firm OBBA (Office for Beyond Boundaries Architecture) is quieter and subtler, but equally curvaceous, reflecting the attitudes of such architectural predecessors as the Catalan Antoni Gaudí, who believed that “the straight line belongs to men, the curved one to God”, and the Austrian Friedensreich Hundertwasser, who added: “The straight line is godless and immoral. The straight line is not a creative line, it is a duplicating line, an imitating line.” The curve, of course, is also by its very nature more fluid, more flexible, and thus more fitting to the theme of this year’s triennial. 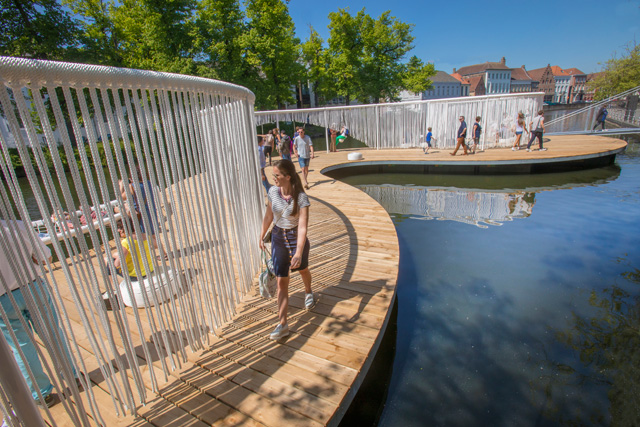 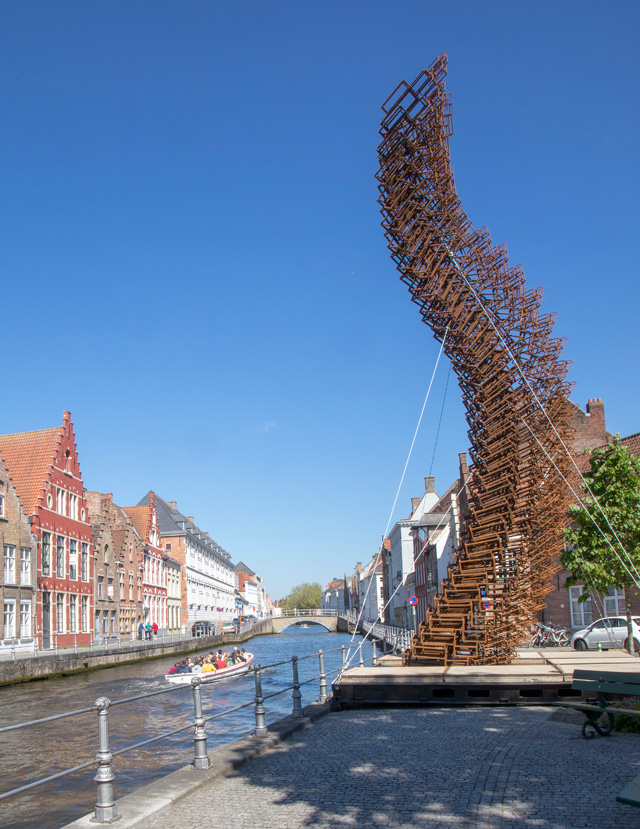 American artist John Powers drew inspiration from folklore to create his towering swan’s-neck structure, Lanchals, equally evocative, depending on the viewpoint, of a backbone or tornado, while, a little further down the canal, the Polish artist Jarosław Kozakiewicz’s Brug comprises an aesthetically inviting bridge made of steel profiles and canvas leading to a small garden, where a permanent (and pre-existing) statue of Niobe reclines. Married, in Greek mythology, to the son of Zeus, her children were slayed by Apollo as a punishment for her pride in and boasting of them. Bereaved, she went back to her home, where she was turned into a rock on Mount Sipylus (Yamanlar Dağı, northeast of Izmir, Turkey), which continues to “weep” whenever the snow above it melts. Her tears became the start of a river, and this contrast between rock and water echoes the contrast between permanence and fluid change.

The popular favourite work – and indeed addressing the hot topic of the moment – is Skyscraper (the Bruges Whale) by the American StudioKCA, which crowdfunded for volunteers to help it beachcomb in Hawaii, collecting, cleaning and sorting more than five tonnes of waste plastic, from which it built an enormous sculpture in the shape of a leaping whale, emerging from the first interior harbour of the city. 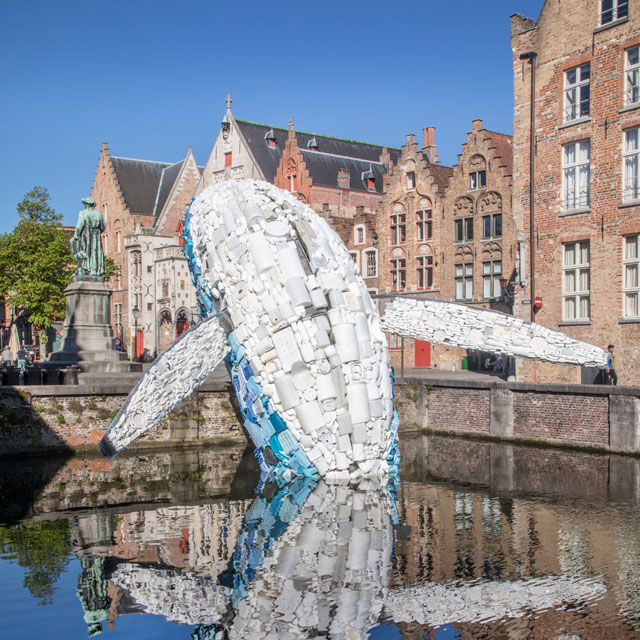 As well as being unmissable, striking and offering great selfie opportunities, the work, on a more serious level, highlights the growing problem of plastic pollution in our oceans – the biggest liquid city of our planet.

There are enough outdoor works to easily fill a full day of unhurried wandering around the city, and this is supplemented by an exhibition indoors at the Poortersloge, where models and further information on all the works and artists involved can be browsed at leisure.

The concept behind the triennial is a serious one, and a lot can be learned, and much valuable conversation initiated as a result, but it can also be enjoyed purely for the aesthetic pleasure offered by each of the variously brazen and subtle, loudly statement-making and quietly opinion-seeking architectural interventions across the liquid city of Bruges. 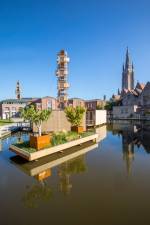