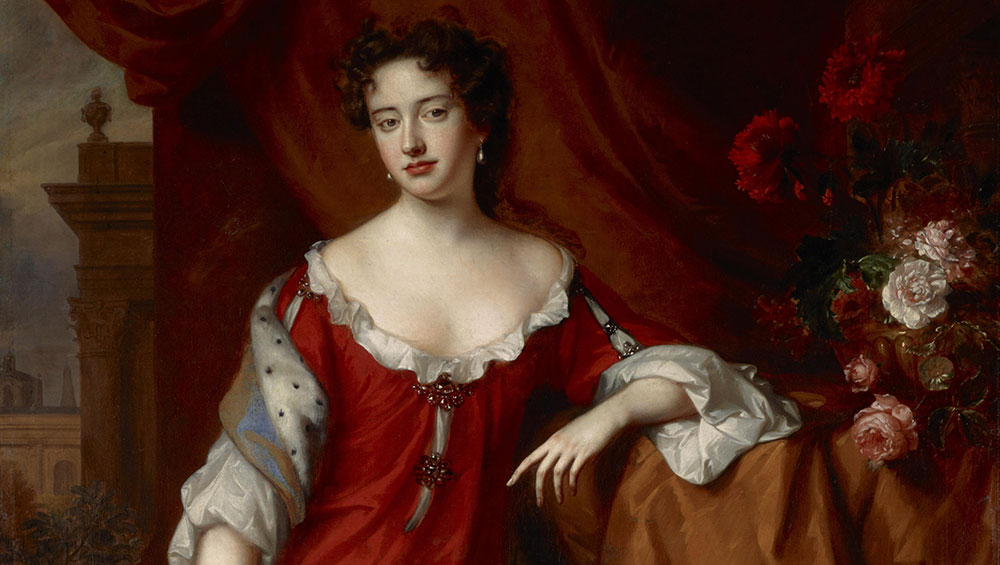 In the spring of 1672, a jobbing Italian painter named Antonio Verrio arrived in England, under the patronage of the diplomat Ralph Montagu. He quickly attracted commissions from aristocrats keen to decorate their mansions in the sumptuous ornamental style that had already swept across much of mainland Europe. One day, while Verrio was painting the Earl of Arlington’s Westminster townhouse, Charles II paid a visit. Probably sensing his chance to move from society decorator to painter for the king, Verrio set about creating a sample work that Charles would be unable to resist. 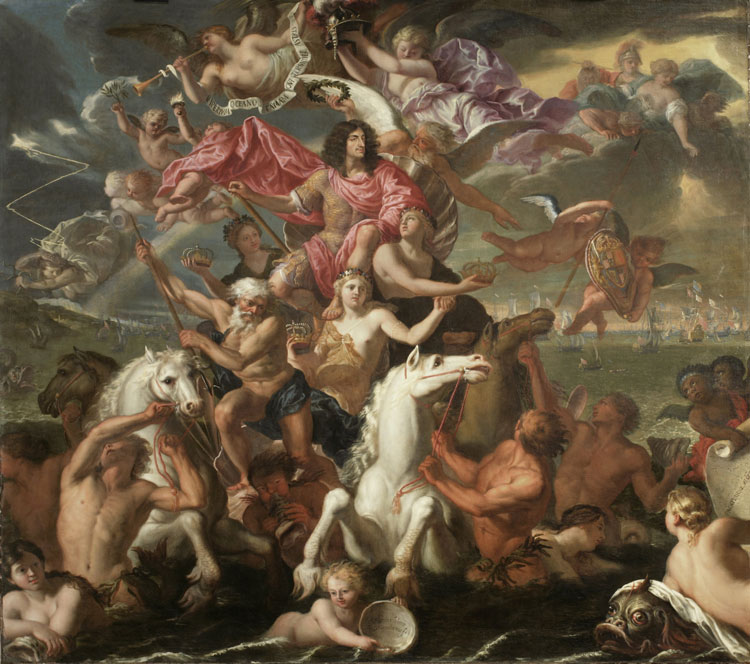 Verrio’s The Sea Triumph of Charles II (c1674) might just be art history’s most grandiloquent calling card. Verrio painted the king victorious atop a chariot driven by the sea god Neptune, surrounded by adoring virtues carrying his crowns. The sea below churns with nudes and monsters, while above Venus and Minerva smile on the monarch and his navy. Charles had just retreated in humiliation from the third Anglo-Dutch war, after parliament had refused to continue funding a losing cause. But Verrio’s fabulously frothy encomium cast him as a victor, clothed in the armour of classical conquerors. The king had the work hung in Whitehall Palace, and Verrio was commissioned to decorate Windsor Castle.

The Sea Triumph is the first thing you see when you enter the Tate Britain’s elephantine exhibition British Baroque: Power and Illusion, and the perfect encapsulation of its subtitle. It hangs near a marble bust of Charles by the little-known sculptor Honoré Pellé, in which the larger-than-life monarch dramatically twists his head with imperious hauteur. This was carved in 1684 and suggests a king with the absolute authority and uncommon longevity of Louis XIV. In reality, he died the following February, and the royal dominance that seemed secure in the Restoration suffered an immerse blow with the disastrous three-year reign of his brother James II and his subsequent deposition and replacement by the pliant Dutchman, William of Orange. In Pellé’s hands, though, Charles’ majesty is eternal. An illusion of power persists. 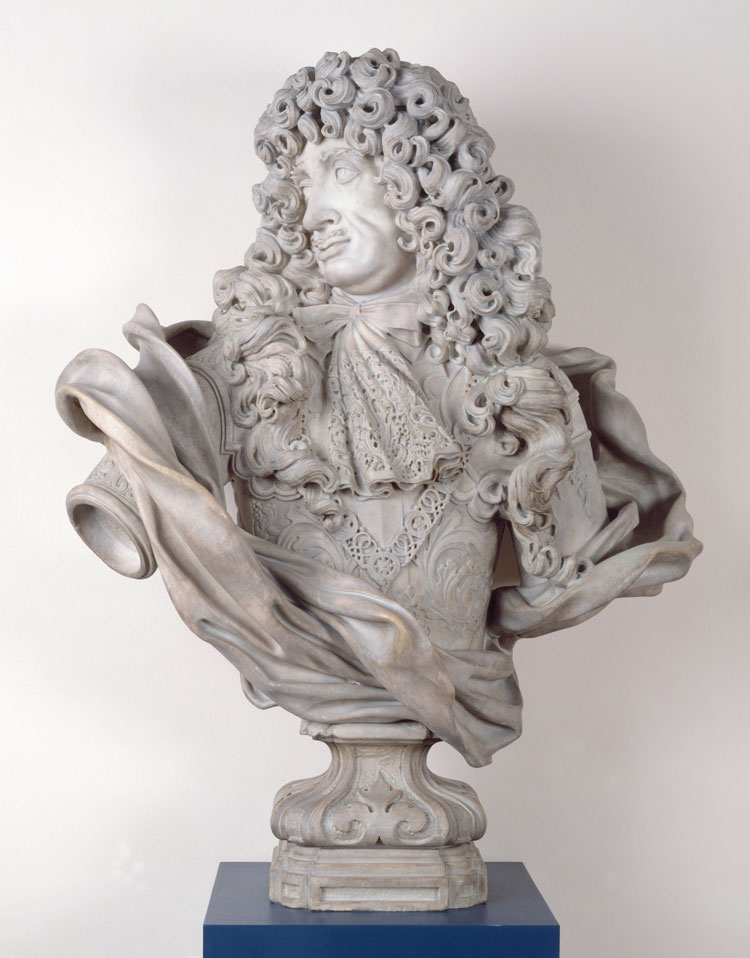 Pellé, a Frenchman living in Genoa, never laid eyes on Charles. Verrio did, but probably painted his triumphant king from a miniature, upsizing from micro to macro. At its best, British Baroque presents a moment where wondrous artifice often pipped grim reality. Grinling Gibbons concocted fantasias in limewood that seem imbued with the spark of life. Evert Collier specialised in trompe-l’oeil still lives of letter racks, and Samuel van Hoogstraten created perspective boxes, with holes through which revellers could peep as if into the rooms of the house. At Chatsworth House, Jan van der Vaardt went so far as to paint an uncannily accurate violin on a door (after 1674), replete with shadows. Even society portraiture was prone to tricks, riddles and double meanings. Around 1664, Sir Peter Lely deftly painted Charles’s mistress Barbara Villiers and their bastard son as the Virgin and Child. Was it a nod to Villiers’ Catholic faith or a private joke about her rather unvirginial promiscuity? Or is it simply an adaptation of a fashionable European model? 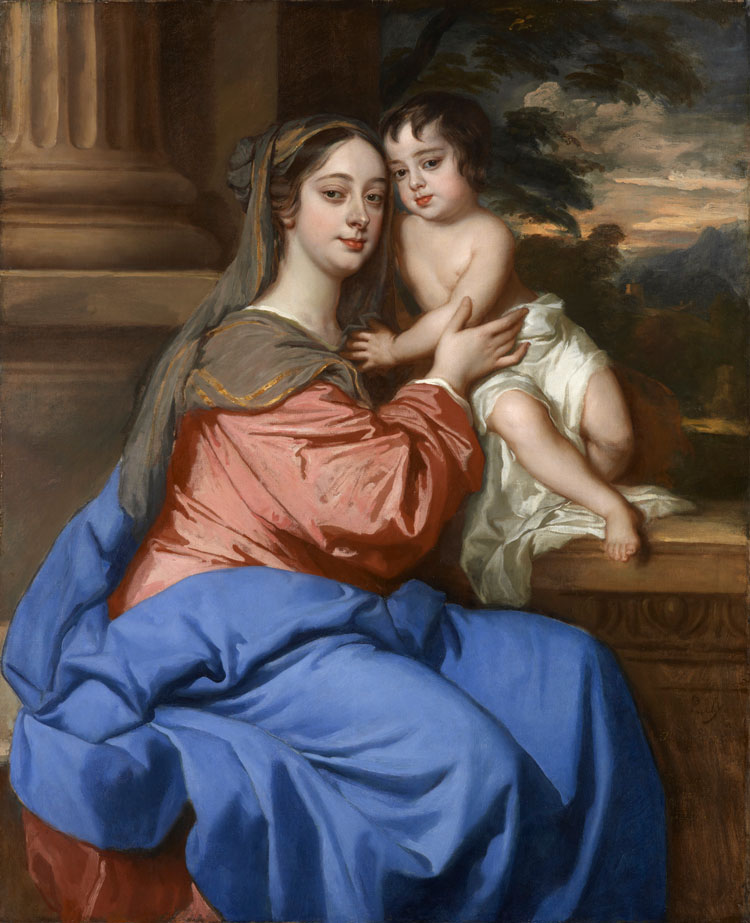 The artists mentioned above span a broad swathe of form, medium and style. What unites them is that they were all born in mainland Europe. Some, including Lely (born Pieter van der Faes in Westphalia) and his successor as court portraitist. Sir Godfrey Kneller (born Gottfried Kniller of Lübeck), settled and became British citizens; many others passed through. British Baroque is thus something of a misnomer (its earlier moniker, Baroque in Britain, would have been more accurate; Baroque in London and the south-east more accurate still). This was an exceptionally cosmopolitan artistic milieu, but the Tate does little to illuminate the forces that brought artists in and out of the British Isles. 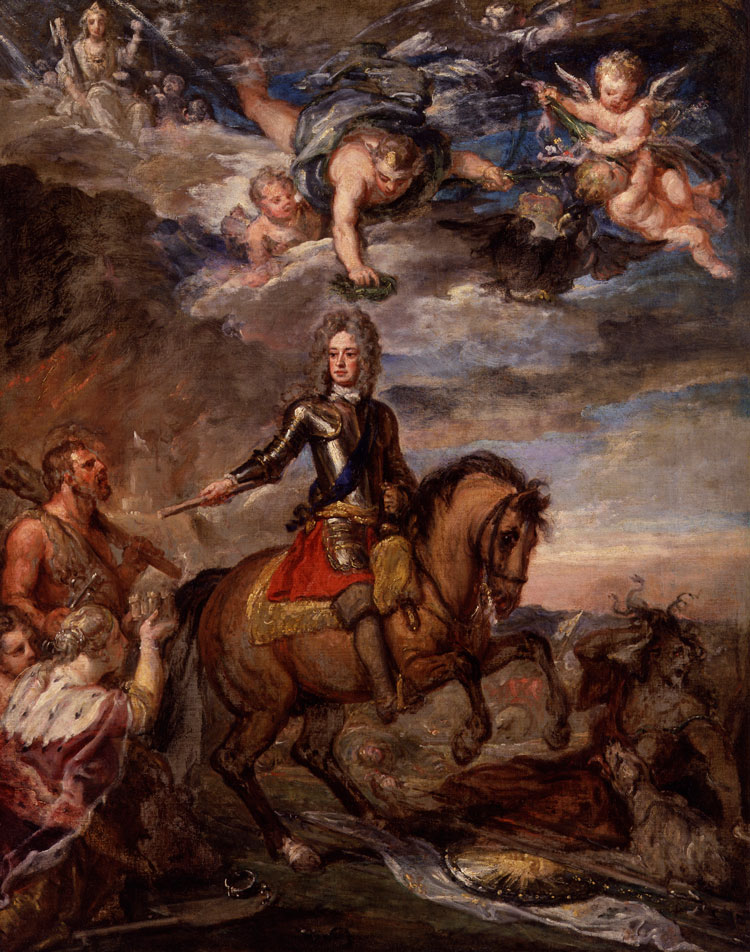 The exhibition’s other head-scratcher is its choice of dates. We begin with Charles’s Restoration in 1660 and conclude with death of Queen Anne in 1714. But the cultural movement that we now know as baroque was well underway at the start of the 17th century, and for once Britain caught on relatively quickly. Charles I – a third-rate king, but a first-rate collector and commissioner of art – managed to coax the Flemish titans Peter Paul Rubens and Anthony van Dyck over, as well as the Italian Caravaggisti Orazio and Artemisia Gentileschi. By the time the exhibition commences, all four were dead. It was a strange decision to mount this exhibition without their presence, even as their influence pervades. 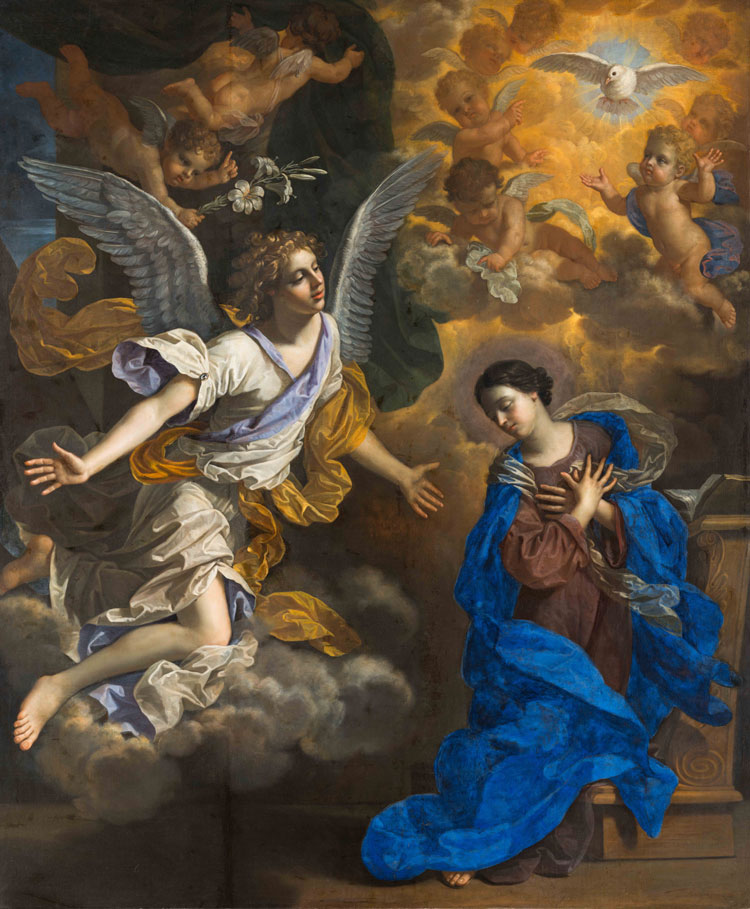 Despite this curtailment, Baroque Britain is overstuffed with a confusion of riches. There is both too little and too much. Subjects worth in-depth exploration – the development of a classically inspired architecture and horticulture, the embrace of Italian-style painted rooms in stately homes, the era’s advancement of science, contemporary furniture and decorative art – flutter by abruptly. The most egregious absence is a sustained consideration of religion. Baroque art blossomed out from the Counter-Reformation in Rome, and its initial subject matter was religious; its expansion into other genres, or the retroactive drawing of these works into the orbit of the Baroque, came later. Britain was racked by religious division throughout the century, leading up to the Catholic James II’s overthrow in 1688. There are some tantalising glimpses into the aesthetic to-and-fro of the time. Benedetto Gennari’s exceptional Annunciation altarpiece for James II’s Catholic chapel at Whitehall (1686) offers a glimpse of what could have been had the country followed his embrace of Roman aesthetics. But an issue that deserves centre stage is relegated to the orchestra pit.

With such a paucity of religious art, portraiture predominates. This is often lively and engaging, especially in its most eccentric manifestations – Jacob Huysmans’ Duke of Monmouth (c1662-5) as the slightly heavier-set brother of Caravaggio’s St John, or Henri Gascar’s Duke of York (1672-3) as a peacocking Roman general. The stories that animate these portraits are often absent. The excellent Charles II: Art and Power, a Royal Collection Trust exhibition that first opened at London’s ostensibly conservative-minded Queen’s Gallery in 2017,  did not stint from the political controversies of the time, nor the salacious liaisons of the Restoration court. It is curious to find the Tate’s take on the period so comparatively polite.

After the Glorious Revolution, Parliament rose in prominence and the power of the monarchy abated. The last two rooms of the exhibition deal with the second half of the chosen period. The earlier splendour gives way to sober military scenes and dour politicians; squint and you could be in the National Portrait Gallery. There are moments of elevation: Kneller’s teasing, poised double portrait of Sarah Churchill, Duchess of Marlborough playing cards with Viscountess Fitzharding is a late highlight. Yet at this point, we seem a long away from the high baroque of Verrio and Gennari, with little enlightenment on how we arrived there. This is the Tate’s first ever exhibition devoted to this epoch, and it makes a strong case for a greater understanding of it. But you won’t necessarily find that understanding here. 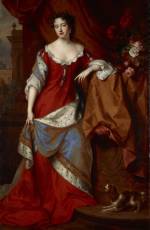 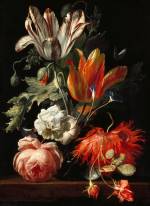 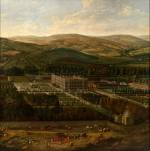