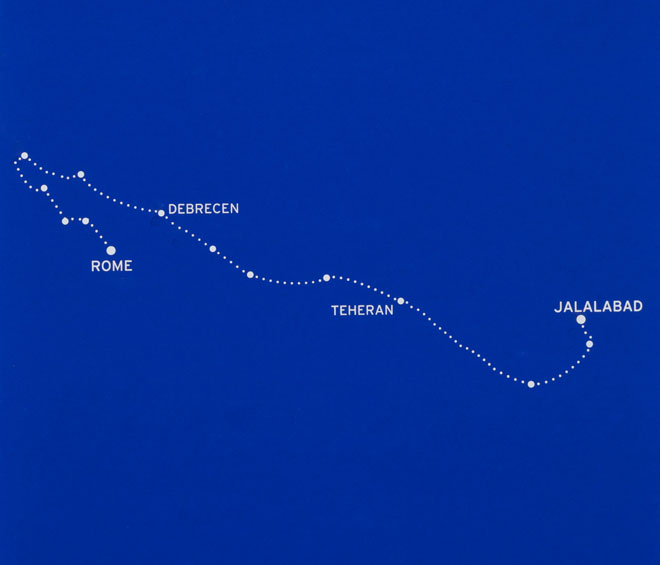 Migration, displacement, borders and the forces that police them are concepts that currently occupy a critical place in our public discourse. Lisson Gallery’s timely showing of Moroccan-French artist Bouchra Khalili’s recent work, her first solo exhibition in the UK, is a ponderous exploration and interrogation of the fraught concepts of freedom, geography and nationhood. On show are three distinct bodies of work: The Mapping Journey Project (2008-11) (previously shown at MoMA, New York), The Constellation Series (2011) and Foreign Office (2015) (previously shown at Palais de Tokyo, Paris). Together, these works in film, photography and silkscreen prints form an intelligent critique of ideas of language, shared history and multifaceted identity.

The centrepiece of this exhibition is Khalili’s The Mapping Journey Project, a series of eight videos projected on to an arrangement of four double-sided screens. On arrival, visitors descend into the main gallery room, threading their way between the screens, which each bear a familiar map – of Europe, North Africa, the Middle East and South Asia, multicoloured patchworks of interlocking political entities.

The videos tell the stories of eight people forced, for economic or political reasons, to travel illegally across borders. In each video, a disembodied hand draws meandering lines in permanent marker on to these well-known topographies while, in tandem, the traveller narrates, in dry, factual detail, the events of their journey along the route. Visitors hear, in various dialects of Arabic, English and Italian, tales of passing through control points, treks through the desert, and perilous crossings to the island of Lampedusa.

While there are tales of sadness – papers revoked, arrests made – and of relief – a kind stranger gives a traveller a job in a sugar factory – there is no reach for emotive language in the stories portrayed. Likewise, there is no interviewer, no editing to shape the narrative these people present. In these stripped-back, spare compositions, Khalili lets her subjects speak for themselves and thus, by vocalising their experiences, gain empowerment over them.

Mapping Journey 3 lays bare the political ambitions of these works. It stands out from the rest as a map of the West Bank, a chaotic maelstrom of yellows, reds and crosses, which changes by the year. The narrator of this video is not a refugee, but a Palestinian meandering between Palestinian-controlled areas, Israeli settlements and security checkpoints as he tries to make the trip from Ramallah to Jerusalem to visit his girlfriend. A journey that should have lasted a few minutes takes hours. It is here that Khalili’s message is at its clearest: that the act of travelling across and between borders is, for an illegal or semi-legal traveller, an inherently political act, a mode of resistance to the state power that drew up those borders in the first place.

In the same room as The Mapping Journey Project is The Constellations Series, a set of eight silkscreen prints that correspond to each of the eight video projects. Khalili has transposed the trajectory of each journey to a deep blue background, the multicoloured political patchworks wiped away. Without such context, these journeys take on different meanings and arouse different emotions: as concepts of distance and terrain fade, what were previously circuitous journeys of hardship and necessity suddenly seem audacious voyages, elegant flight paths in their looping contours. For Khalili, the underlying message of these prints verges on the utopian. As she wrote of these prints in the summer 2016 issue of Artforum: “Following singular lives emerges as an alternative form of orientation, eventually suggesting: ‘A map of the world that does not include Utopia is not even worth glancing at’ (Oscar Wilde, The Soul of Man Under Socialism).”

The next room houses a more recent body of work, a mixed-media installation titled Foreign Office. Comprising a 20-minute film, a series of photographs and a silk-screen print, Foreign Office sees Khalili exploring in greater depth her fascination with language and personal identity, here as it relates to Algeria and the wider north African region.

In the film, two young Algerians are recorded learning a history of Algiers, which has been consistently expunged from official accounts. In the decade immediately after Algeria’s independence in 1962, Algiers became the “capital of the revolutionaries”, with dozens of international anti-colonial resistance groups setting up headquarters in the city. The young Algerians mark out on the map of the city the headquarters of these resistance groups, which range from those still known today – the African National Congress and the Black Panther party – to often forgotten, more niche organisations, such as the Popular Front for the Liberation of Oman and the Arab Gulf and the National Liberation Front for Southern Vietnam. The precise locations of these headquarters are mapped out, in a similar style to The Constellation Series, on a blue silkscreen print titled The Archipelago, while photographs of the buildings that housed these headquarters, ironically all from the colonial era, are placed in the approaches to the video, empty of human presence and scrubbed of any clue as to their prior use.

The two Algerians handle old photographs and read quotations from well-known freedom fighters of the period, such as Amílcar Cabral and Eldridge Cleaver. They arrange the photographs into collages and speculate on what those well-known speeches and texts could mean for them today. Though composed to suggest that these young Algerians are in dialogue with each other, they are actually unable to understand one another, speaking in parallel. The woman speaks Algerian Arabic, while the man speaks Kabyle, a Berber language native to around five million people in the country, though without official status. They recite to each other the complex abbreviations of revolutionary groups – Fatah, Frelimo, MPAIAC – names well known to a particular generation of Algerians, but practically unknown to the youth of today.

These works, often sparse and formal, can be difficult: Khalili has no desire to explain things for us. In this exhibition, she exposes these alternative geographies, founded in personal experience and identity rather than political systems. It is up to the viewer to listen, to empathise, and to try to make sense of the landscape.