From individual buildings to large cityscapes, all the sculptures in this first US retrospective of Kingelez’s work exude his optimism and vibrancy. And, thanks to virtual reality, MoMA gives us the chance to walk the streets of one of his cities 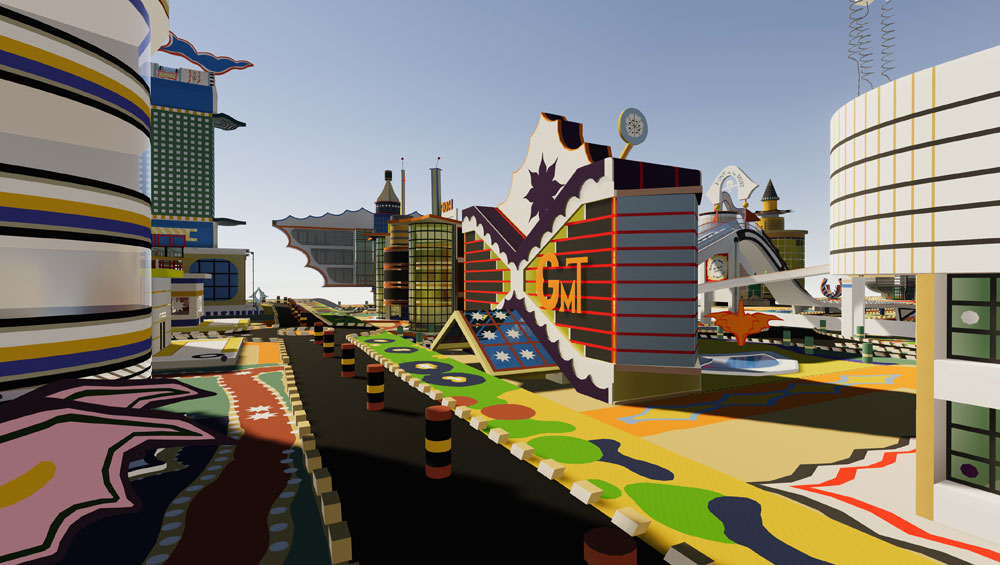 The Congolese artist Bodys Isek Kingelez (1948-2015) moved to the city of Kinshasa in 1970, 10 years after Zaire claimed its independence from Belgium. This marked a period of rapid development for Zaire, now the Democratic Republic of the Congo, although the country lacked the infrastructure to keep up with its growth. It was here, in this drastically changing cityscape, that Kingelez began to build his own dreams of what his city and country might become. In the first US retrospective of Kingelez’s work, the New York Museum of Modern Art has brought together a collection that spans his full career, from individual buildings and city squares to large, vibrant cityscapes. 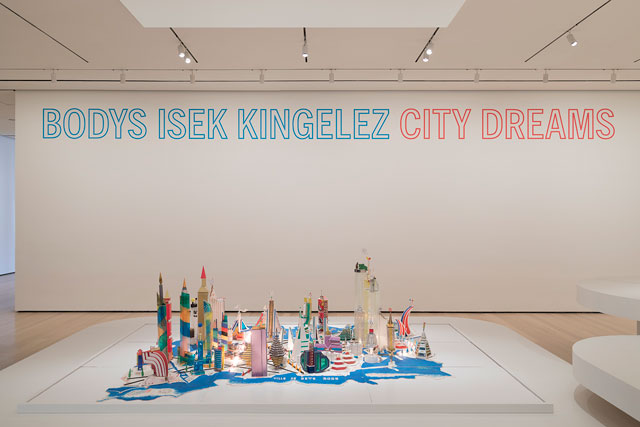 Toothpaste packaging, soda cans, mint boxes, plastic, bottle caps – these are some of the everyday objects Kingelez used to build his cityscapes. These unorthodox materials imbue his work with a certain playfulness, as though recognising and pointing out these everyday objects were a game. And, in the gallery space at MoMA, there are plenty of familiar objects to be discovered and delighted over in Kingelez’s sculptures. In one of his later works, Nippon Tower (2005), the artist has composed a skyscraper out of various packaging: a plastic Smint box, BIC razor blades, a milk carton, a plastic spoon, lightbulb boxes and a label that reads in gold letters, SUPER ELEGANT. 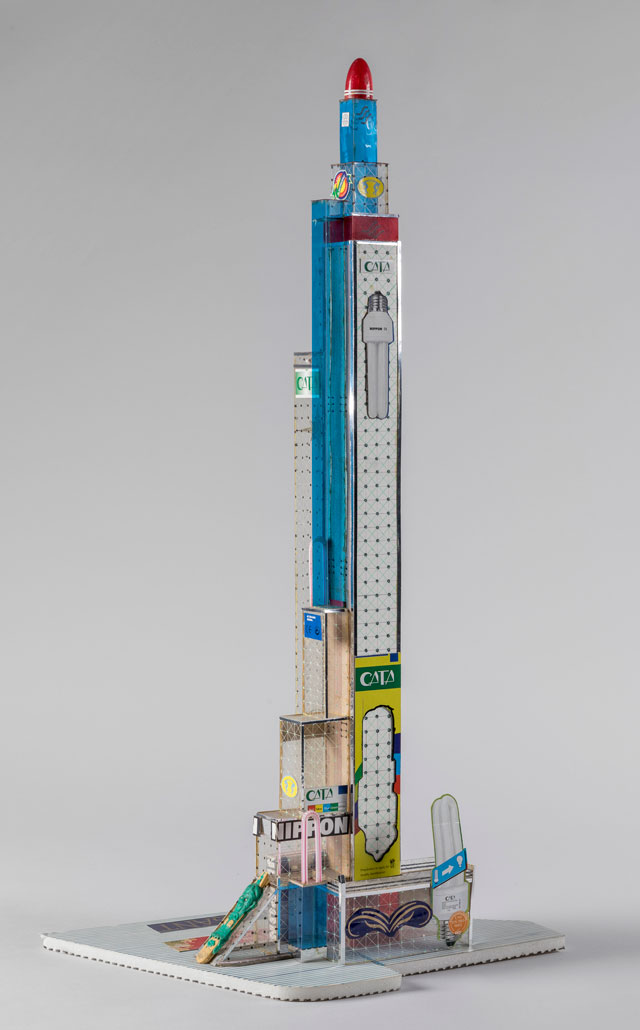 In another piece, Sports Internationaux (1997), the central column has been built using cans: Coca-Cola, Pepsi, Beck’s, Stella Artois, Lipton. Together, these objects might be read as a self-portrait of Kingelez, transporting us to the space in which he lived and worked, the objects and brands that surrounded him, and which he perhaps preferred to others. But in their vibrancy of colour and soaring height, they also capture the artist’s hopefulness and optimism for his city’s future. 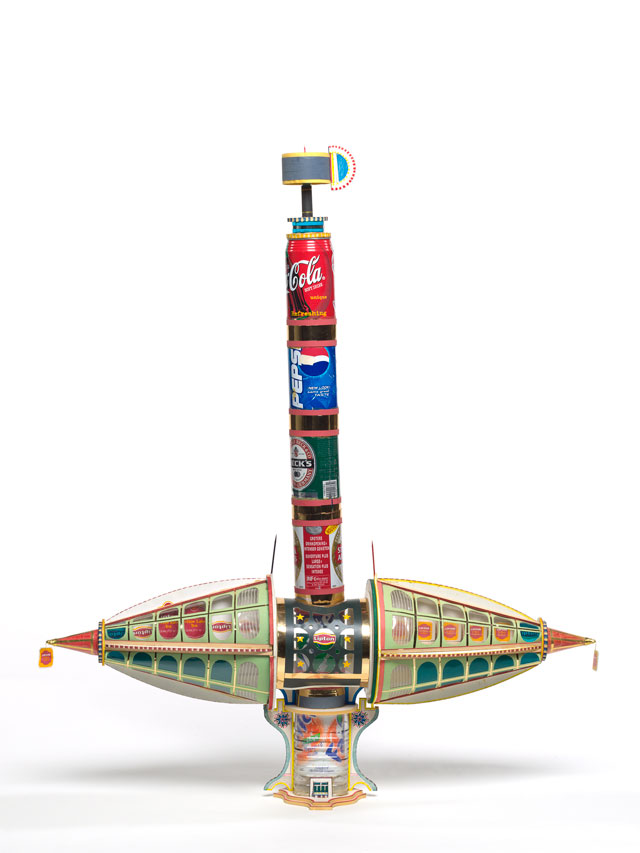 All the sculptures on show at MoMA are characterised by Kingelez’s optimism. The collection ranges from individual buildings, such as Nippon Tower and Sports Internationaux, to small complexes with gardens, palm trees and swimming pools. Some of these demonstrate Kingelez’s concern with world events and social issues. One sculpture looks, on first glance, like a hotel, with blue swimming pools on either side. But a small, painted sign that holds the title of the piece, The Scientific Center of Hospitalisation the SIDA (1991), signifies that it is not a hotel but a medical centre: it is Kingelez’s vision for a comfortable place, free from the sterility of hospital environments, in which those with Aids could be treated and cared for. Another piece, Centrale Palestinienne (1994), references the first Oslo Accord, signed some months before Kingelez composed the sculpture, affirming Palestine’s right to self-government. 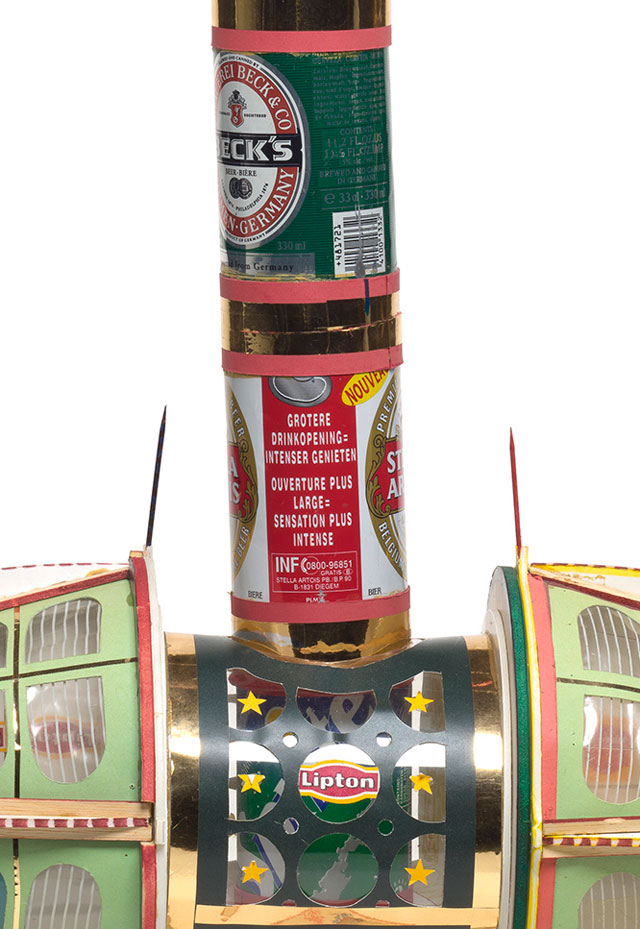 Kingelez didn’t travel outside Zaire until 1989, but, even so, he was deeply engaged with world affairs. In a documentary made by Dirk Dumon in 2003, Kingelez: Kinshasa, A City Rethought, included in the show at MoMA, we see Kingelez at his home, working on his sculptures, in the company of his wife. He explains his process, ethos and life. Kingelez was critical of Zaire’s dictatorial regime, which led the country into bankruptcy, but he believed that an ideal society could be reached through education, cooperation and conversation. “Relations between countries and cultures must be handled with respect and consideration,” he said. “We must listen to one another.” 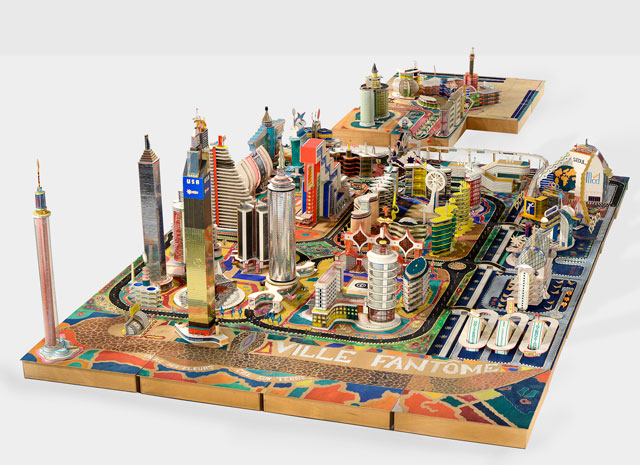 We see this sensibility in Kingelez’s larger, sprawling cities, complete with skyscrapers, train stations, stadiums and universities. He called these sculptures “extreme maquettes”, models that embody his vision for the harmonious, multinational society he described in the documentary. In his largest cityscape, Ville Fantôme (1996), we see all the practical elements of a city, but, in the spirit of global relations, each is assigned to a country. 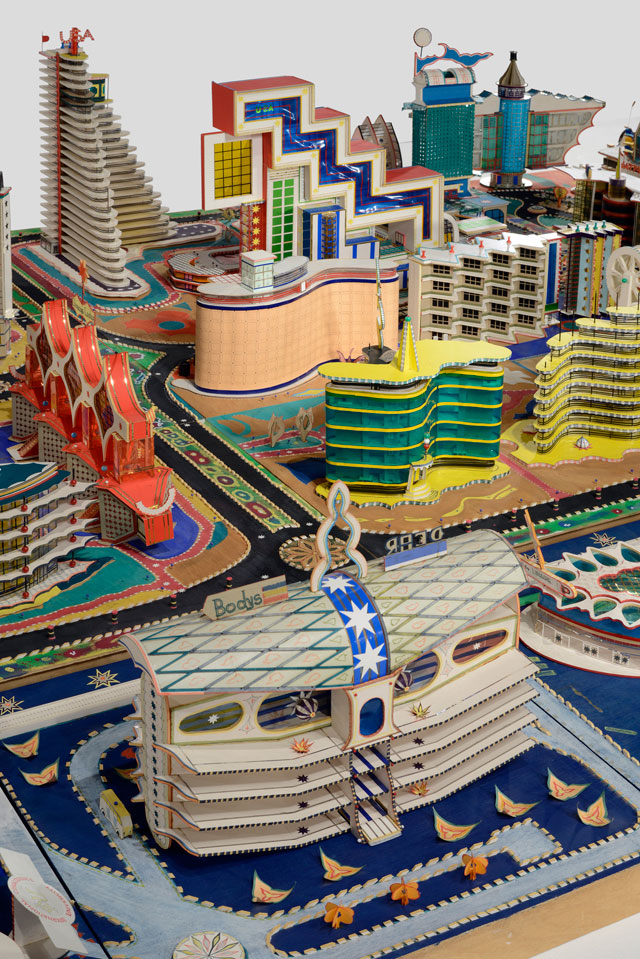 There is a Vietnamese train station, a South Korean restaurant, an international airport, a Norwegian swimming pool and a Swiss university. Kingelez said of the sculpture: “There is no police force in this city, to protect the city, there are no soldiers to defend it, no doctors to heal the sick. It’s a peaceful city where everybody is free. It’s a city that breathes nothing but joy, the beauty of life. It’s a melting pot of all races in the world. Here you live in a paradise, just like heaven.” 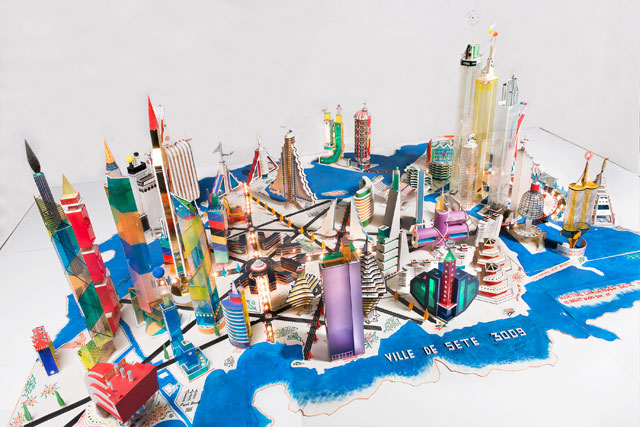 Kingelez constructed another of his “extreme maquettes”, Ville de Sète 3009 (2000), during a month-long residency in the South of France. Some features, such as Hôtel Azur, are realistic representations of buildings found in the city of Sète, whereas others have been construed entirely from Kingelez’s imagination. The city appears to be almost functional, complete with a mayor’s office, a police station, a summer market, a bank, a hospital, a mall and four-lane highways. It is also the only piece for which Kingelez built in electronic lights. 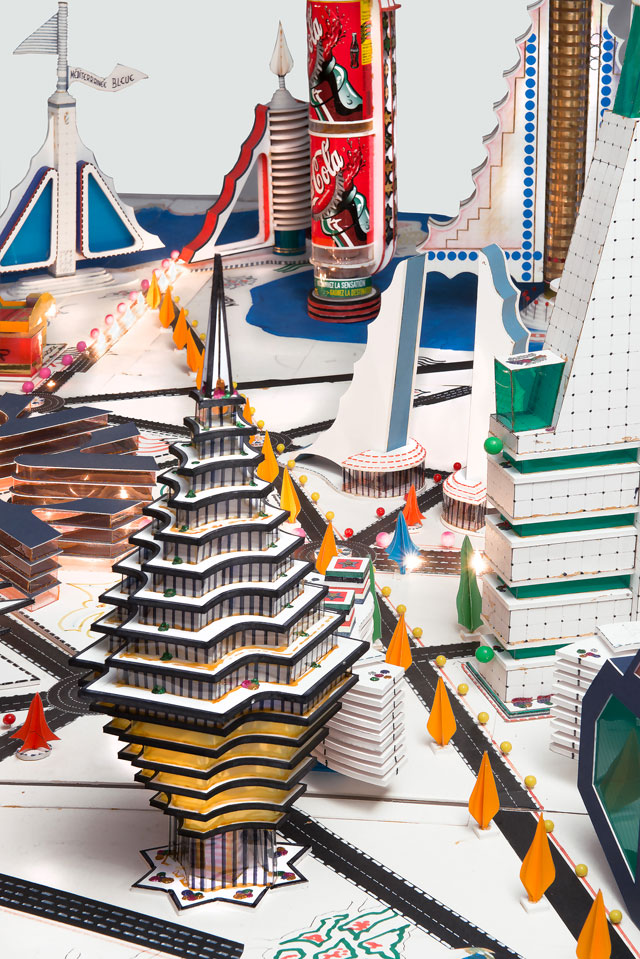 But with its bright colours and miniature buildings, there is to this piece, like all of Kingelez’s works, a distorted reality. MoMA gives us the chance to step into one of his cities, Ville Fantôme, in the virtual reality developed by Third Pillar for the exhibition. For a few minutes, viewers can walk around Kingelez’s cityscape, viewing it from the tops of skyscrapers to street level, enabling us to step into the artist’s imagination and see through his eyes. But the dream is only temporary. We know that Kingelez’s cityscapes are not places of today, or even of the future, but are visions for what it might be like to live in a brighter, more prosperous world. 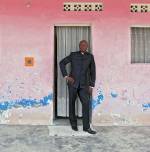 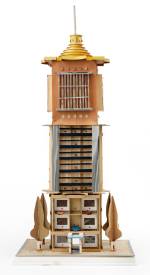 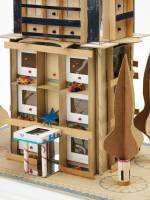