Betty Yu: ‘Wherever you are, there are folks fighting for their lives’

Betty Yu: ‘Wherever you are, there are folks fighting for their lives’ 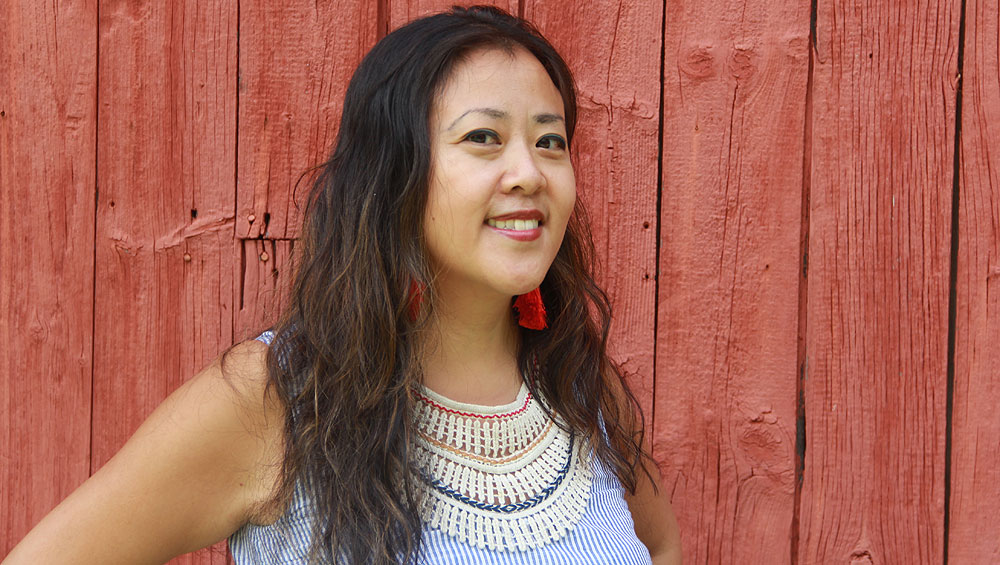 Multimedia artist and activist Betty Yu was born in in 1977 in New York City, the youngest of four sisters. When her parents moved to the US from Hong Kong, her mother, Sau Kwan, found work in New York’s garment factories. “Mum worked in more than two dozen factories over a 30-year period,” Yu tells me. “She moved around quite a bit in union and non-union shops. The unionised shops sometimes practised even worse conditions, so it really made no difference.” Yu explored the terrible environment her mother – and many thousands like her – endured, in a documentary called Resilience, which debuted at the Margaret Mead Film Festival in 2000. The film also touched on Kwan’s leadership in the fight against exploitation and the hunger strike Yu’s sister Virginia participated in to draw attention to the exploitative environment in which Chinatown workers found themselves. 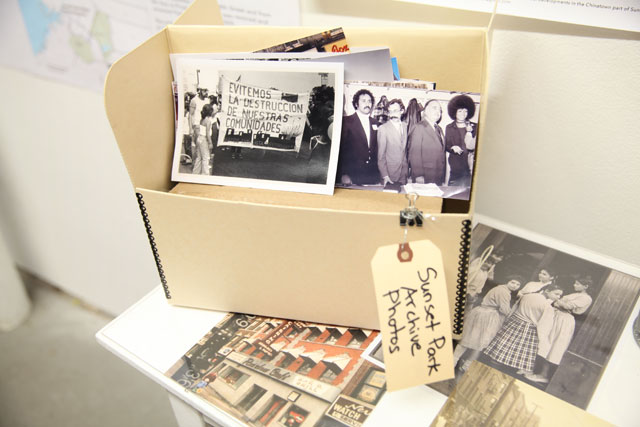 Things got worse for the garment workers of New York after 9/11. “A lot of people lost their jobs in Lower Manhattan because Chinatown was so close to the Twin Towers,” Yu explains. “A lot of the trucks couldn’t get in to pick up and drop off garments, and that provided a window of opportunity for the real-estate developers to move in. It was at that point that a lot of workers ended up getting laid off.” Fortunately, her mother found work in Sunset Park, Brooklyn, where Yu and her sisters had grown up.

Much of Yu’s work centres on her Brooklyn neighbourhood, but she has also made a number of short documentaries about social justice and gender. In 2015, she co-founded the Chinatown Art Brigade (CAB) with artists Tomie Arai and ManSee Kong. CAB, a collective that seeks to precipitate change through art, also collaborates with the local tenants’ union to tackle the negative impact of gentrification on Sunset Park. Of course, New York City is not the only place experiencing the effects of what some are calling modern colonisation. Issues of economic and social displacement are global, and the art world, Yu argues, is complicit in pricing out local communities. So what can be done? I spoke to Yu about gentrification and what artists and galleries can do to help.

Emily Spicer: After the hunger strikes featured in your documentary Resilience, did the conditions in Chinatown factories improve?

Betty Yu: The conditions are still bad. The sweatshops are coming back with similar conditions that my mum worked under, but not in such large numbers, so there’s not a lot of media attention because folks think they’re all overseas now. 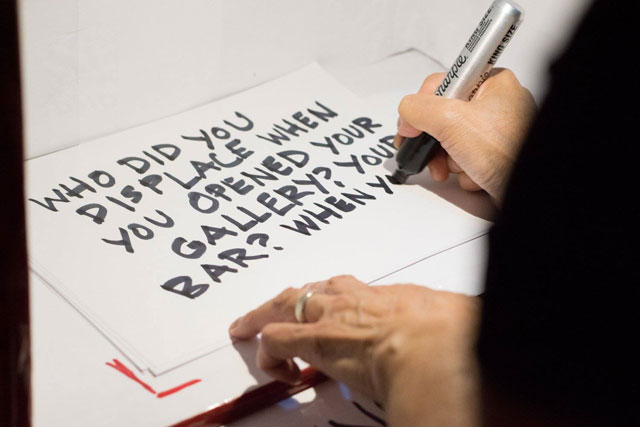 ES: The gentrification issue is an interesting one. It is now a well-known pattern. When artists move into an area with low rents, galleries follow and then the boutiques and the coffee shops and, eventually, locals are priced out of their homes. Do you think there is anything artists can do to mitigate the impact they have on a local community?

BY: That’s a really great question. And, yes, individuals have a choice, especially if they are coming from a little more privilege – whether that’s wealth or race. But the galleries are the Trojan horse. Developers and real-estate agencies only want to rent out to galleries in many cases, and that’s because they raise the real-estate value tremendously. A Chinese bakery would rent for maybe $5,000 [£3,923]. Think how many buns and cups of coffee they would have to sell [to cover that]. A commercial gallery only has to sell one or two paintings and they make the rent. So developers bring in artists and galleries, and the galleries become complicit because they bring in businesses such as hipster bars and cafes and places that everyday people in the neighbourhood can’t afford.

If you look at the Chinatown Art Brigade website, there is a 10-point pledge that we put out for artists, not just outlining how to be a good neighbour, but also a forceful ally in the fight, because what’s happening in Chinatown is just a microcosm of what’s happening throughout the country. These arts districts get formed in working-class neighbourhoods and they become a voting block within the community boards. Any time you want new construction or new businesses, it has to go through the community board. There are 130 galleries in Chinatown that have replaced small mom and pop places. That’s a big block that can be a force for good or a force for evil. 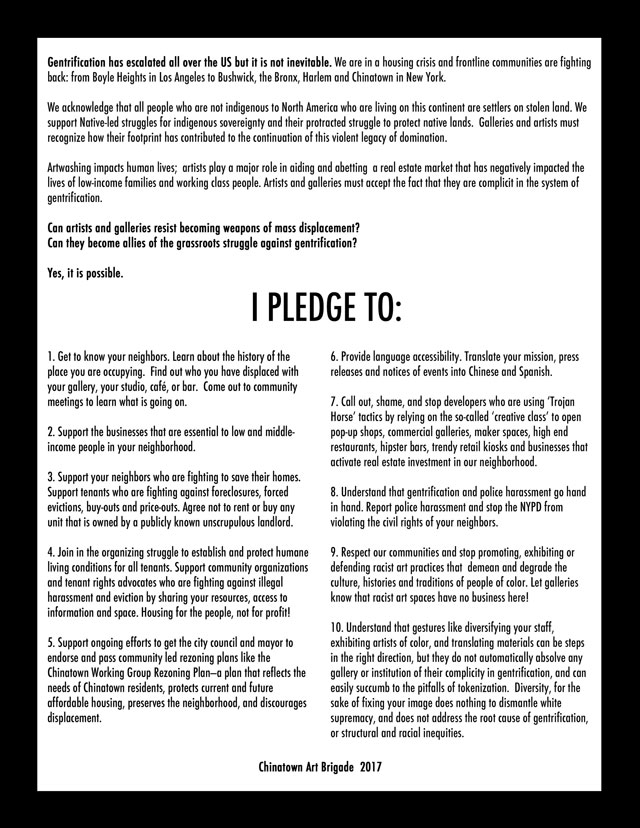 Part of our 10-point pledge includes supporting local businesses. Say hi to your neighbours, translate your gallery information into Chinese and Spanish. Do all of that. But also get involved in tenants’ rights associations. Wherever you are, there are folks who are fighting for their lives, so there’s not a dearth of information. Before you move somewhere, find out if people have been evicted: if they have been, the chances are the rent went up a lot and they were forced to move. Tell your friends not to further their footprint; find out what’s going on.

ES: Where should artists exhibit? Should they avoid exhibiting in areas that are being gentrified?

BY: That’s a good point. Look at the case of Omer Fast, an international artist who basically turned a commercial white cube into dirt and rubbish as a way of trying to show what Chinatown was before gentrification. It was literally just garbage, but there was so much news coverage. Violent tenant evictions don’t make the news, yet one artist claiming censorship does.

ES: Chinatown Art Brigade protested outside Fast’s show at the James Cohan Gallery. Why did the installation elicit such a reaction? 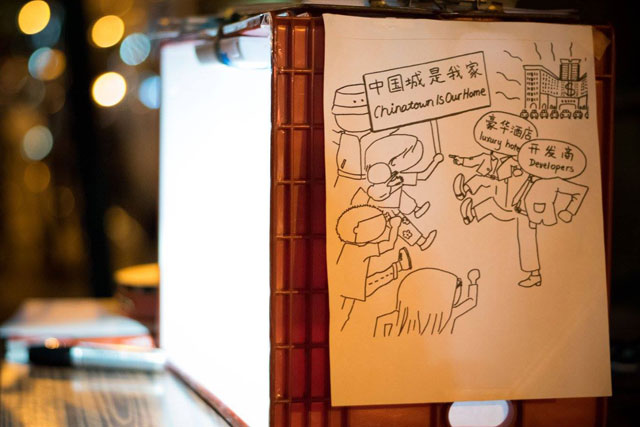 ES: Why was Fast claiming censorship?

BY: I think Fast was falsely claiming censorship because he thought it would help him win more brownie points and gain sympathy from others. We never said anything about boycotting the show or having it removed at all, but all of a sudden Vice and the New York Times and the Guardian are covering it. It’s interesting that it takes an international artist to give exposure to the organising that folks have been doing, not just against galleries, but against gentrification in general. That was an eye-opener for me.

People have reached out to us, saying: “We’re an ally, we’re a good gallery, tenants are welcome here.” Two of them tried to put on fundraisers to give us money. We’ve said we won’t take their money, but that they can give money to the tenants’ union, which is working on the legal front to keep people in their homes. A small number of galleries created a group called Art Against Displacement and that was surprising to us. Margaret Lee from 47 Canal, a very well-known gallery, stepped up and this group still exists, which is great. But it’s a small handful, maybe seven galleries, or six, of the 130. 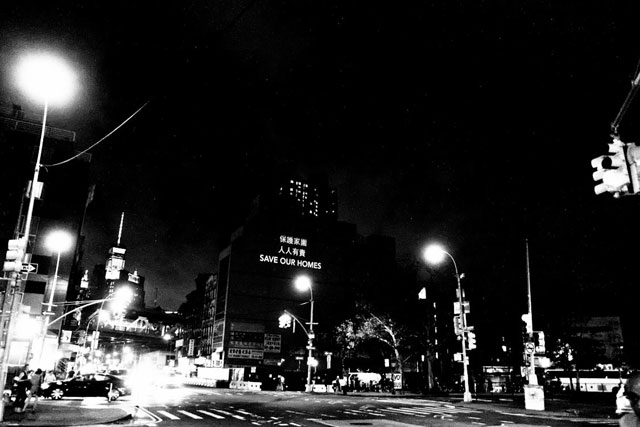 ES: You have created an augmented-reality app that educates people on the history of Sunset Park. Such technology doesn’t take up a physical space. Do you think that augmented reality might provide a viable alternative to exhibiting, lessening the footprint created by galleries?

BY: That’s really interesting. I know it’s an overused term, but with the democratisation of technology, it has made it possible for a wider group to have their work seen. There’s a platform now to level the playing field for people of colour and working-class folks to show their work. There are still structural issues around funding the arts, with the art world being racist and messed up. What has made my project in Sunset Park possible, and a lot of other projects through Chinatown Art Brigade, is online media. It’s true that people in Chinatown in Brooklyn and Chinatown in Manhattan are, in many cases, still working with limited data plans on their phones, so I’m trying to be really conscious of all these things. And a lot of elders are still not very comfortable around technology. But, in general, what I really wanted to do was bring these stories to life, and the audience for the project is primarily people who don’t know much about Sunset Park.

ES: What are you working on now?

BY: A couple of years ago, when I finished my MFA, I was working on a film called Three Tours. It’s about three veterans. One is openly gay and came out when Don’t Ask, Don’t Tell was repealed in 2011, a second is a Mexican veteran who converted to Islam, and the third is a veteran who is an artist. It’s all about how they came back from conflict in Iraq and dealt with their post-traumatic stress disorder through various forms of healing. I was really inspired by how they became anti-war activists. I had never really thought about how veterans are in a unique position to speak out against war because they have actually seen it, have actually been there. So I made this feature-length film and it won a journalism award. I got some small grants to distribute it, so my hope is to do so among veteran organisations and have it play in military towns and recruitment centres.

I’ll also be continuing the Sunset Park project, which is obviously very near and dear to my heart, so I’m expanding it to include more interviews, as well as interviews with European immigrants, who can speak to a lot of the similar issues around displacement. And I’ll be continuing with Chinatown Art Brigade, augmented reality and using QR codes, because a lot of people in Chinatown are more familiar with QR codes than AR, so we’re trying to transition into that. And in February, I’m taking part in the biannual at BRIC, which is up for three months.