The Arthur M. Sackler Gallery, an independent museum on the Washington DC Mall under the Smithsonian Institution umbrella, celebrated its 25th Anniversary in November 2012. The Sackler Gallery bears the donor’s name after approximately 1,000 masterpieces of Asian Art, hand-picked from the entire Sackler Collections by Dr. Thomas Lawton, were gifted to the nation in 1987.

The four-day event was the grand finale of celebrations in various cities around the world during 2012, including New York, London and Beijing.

Sackler Gallery guests could visit currently installed exhibitions, including Nomads and Networks: The Ancient Art and Culture of Kazakhstan; Roads of Arabia: Archeology and History of the Kindgdom of South Arabia; Feast Yours Eyes: A Taste for Luxury in Ancient Iran; Perspectives by Ai Weiwei; Shadow Sites, recent works by Jananne al-Ani and selections from the Arthur M. Sackler gift.

Beginning the proceedings on Wednesday 28 November was a brilliant keynote lecture on Making History: Contemporary Art and the Middle East by Glenn Lowry, director of the Museum of Modern Art. Lowry was curator of Islamic art at the Sackler Gallery when it opened, and a leading figure in obtaining the Vever Collection for the Sackler Gallery.

After the lecture, guests boarded buses to the Royal Embassy of Saudi Arabia where Ambassador Adel A. Al-Jubeir welcomed everyone to a lavish dinner in honor of the Sackler Roads of Arabia exhibition.

The 25th Anniversary Gala took place on the evening of Thursday 29 November. It was an exceptionally elegant occasion. To quote a guest: “The glamour and excitement of that kind of evening is practically extinct.” With Dame Jillian Sackler (Dr. Sackler’s widow), as honorary chairman, the Sackler Gala was chaired by Ann Nitze and Susan Pillsbury, who for more than a year worked together non-stop to make this event a sell-out success. Everyone dressed in their finest, wearing their shimmering possessions, some in traditional dresses. Among those present were the former Empress of Iran, Farah Pahlavi, HRH Princess Michael of Kent and Dr Alice Kandell (who recently donated her magnificent Tibetan Shrine Collection of over 500 objects to the Sackler Gallery). The delicious Asian-accented food was provided by Design Cuisine. The dinner ended with a performance by Korean-born violinist Hahn-Bin, a truly inspiring virtuoso and master of his craft, who after some dynamic pieces, ended with a moving tribute to Dr. Sackler – Somewhere over the rainbow.

The after-party followed and guests danced, and were treated to a 15-minute Pure Land: Inside the Mogao Grottoes at Dunhuang magical experience. This was the first showing in the USA of a digital representation of the Chinese Buddhist cave using 3-D, together with sound effects, bringing to life the people, buildings, wares and musical instruments showcased in the cave paintings. This amazing new technology will help scholars and also help protect the fragile cave environments.

The following day, after brunch at the Embassy of Indonesia, hosted by Ambassador Dr. and Mrs. Dino Patti Djalal, patrons were invited to art discussions. There were five sessions:

Indian Art and the Evolving Contemporary in the Diaspora. Artists Zarina Hashmi and Rina Bannerjee were lead in the conversation by collector Lekha Poddar.

Palanquin for a Shogun’s Wedding. Ann Yonemura retraced the first Japanese acquisition in 1985.

The Disappearance and Appearance of the Vever Collection. Marcus Fraser and Massumeh Farhad discussed this fascinating story and importance to the Sackler Gallery’s collection.

At 2:45pm guests gathered to view Cai Guo Qiang’s Christmas Tree Explosion Event. This was commissioned by the Arthur M. Sackler Gallery and the State Department Art in Embassies Program. The Parks Department would not allowed any explosion on the Mall, nor bleachers, so people crowded behind the phalanx of cameras, waiting for Cai to give the go command. Through the use of gunpowder and carefully placed explosives a Christmas tree blew up (and survived) to look like a Chinese ink painting. Cai was previously commissioned (in 2004) by the Sackler Gallery to create Traveler, a site-specific installation in which seven tons of porcelain spill out of a Japanese fishing boat.

After the explosion patrons were treated to another set of talks.

The Abraaj Capital Art Prize and the World. Dana Farouki, Carol Solomon and Murtaza discussed the evolution of the Prize and its widespread impact on the development of contemporary art in the Middle East, North Africa, and South Asia.

The Importance of Ink Past and Present. Contemporary artist Gu Wenda and curator Stephen Allee discussed the different approaches to ink in modern and contemporary Chinese ink painting.

Later that evening patrons had their choice of dinner and entertainment at the Embassies of India, France, Singapore, Thailand and Turkey.

On Saturday 1 December morning patrons attended the lecture Phoenixes and Beyond by contemporary Chinese artist Xu Bing, who afterwards discussed his works and philosophy with Jane Debevoise and Carol Huh. Xu was the first living artist to be invited to create a site-specific exhibition for the Sackler Gallery and his popular Twelve Monkeys piece is on permanent display. He presented his previous work including illustrated books, digital animated works and the new monumental phoenix project that opened on 22 December 2012 at MASS MOCA.

An informal buffet lunch was held at the Castle with the artist and other attending speakers.

Massumeh Farhad conveyed the message that H.M. Farah Pahlavi said that it was “the party of the year”.

Over $1M was raised, and Director Julian Raby announced that it will go towards acquisitions of contemporary Asian Art for the Arthur M. Sackler Gallery. 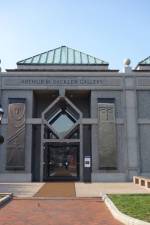 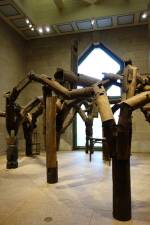 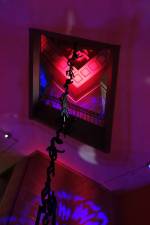 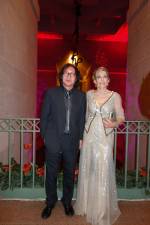 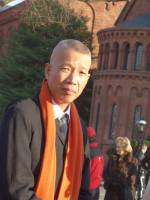 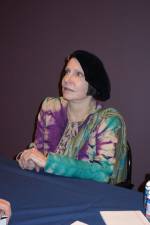