The artists shortlisted for Artes Mundi 8 aim to stir our consciences on everything from abuse of the Earth’s resources to the creep of surveillance and the steel industry’s impact. We talk to two of them, Anna Boghiguian and Otobong Nkanga, about their work 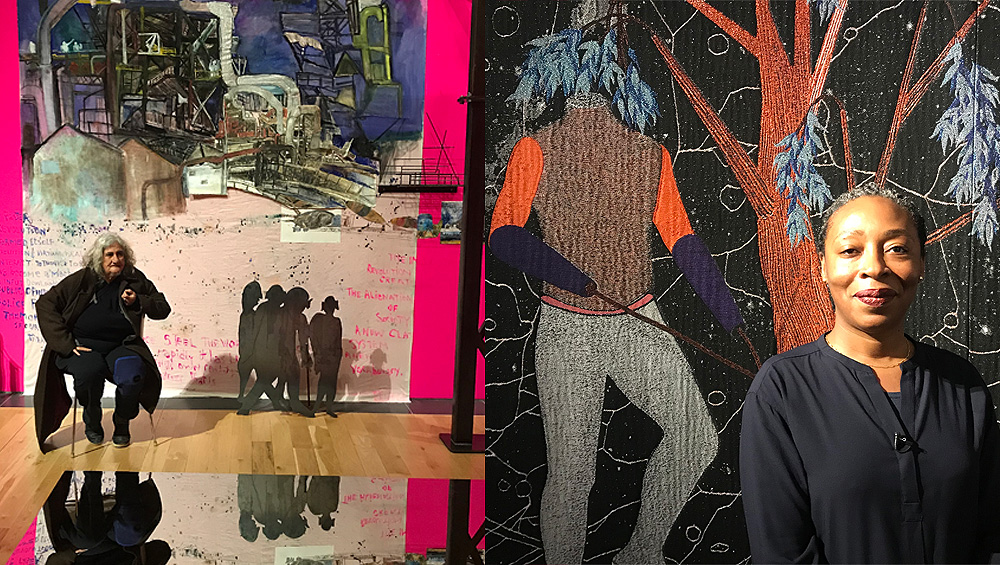 With a cash prize of £40,000, Artes Mundi is the UK’s biggest art prize. Presented every two years, it draws attention to international artists working to highlight the big issues of the day, from industrial exploitation to surveillance to entrenched racism. The previous two winners were film-maker John Akomfrah (2016) and Chicago-based artist and activist Theaster Gates (2014). 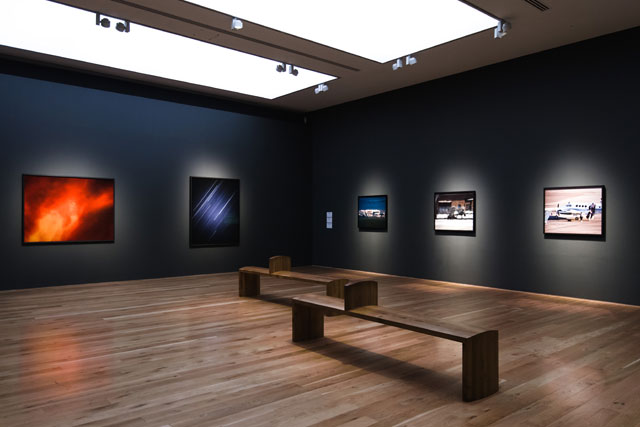 The shortlist drawn up for this, the eighth outing for the prize, is no exception, as the five artists invited to create or install specific works for the exhibition put on at the National Museum of Wales, Cardiff, demonstrate. The US artist Trevor Paglen (b1974), recipient of the 2017 MacArthur “Genius Grant”, presents footage from his series The Other Night Sky (2007-), interrogating the creeping invasiveness of surveillance; it is the fruit of 11 years of collaborating with amateur astronomers to track more than 200 classified military satellites. He is also showing works from his series Limit Telephotography (2005-), which documents secret US government bases, turning their own surveillance technologies back on them as witnesses. 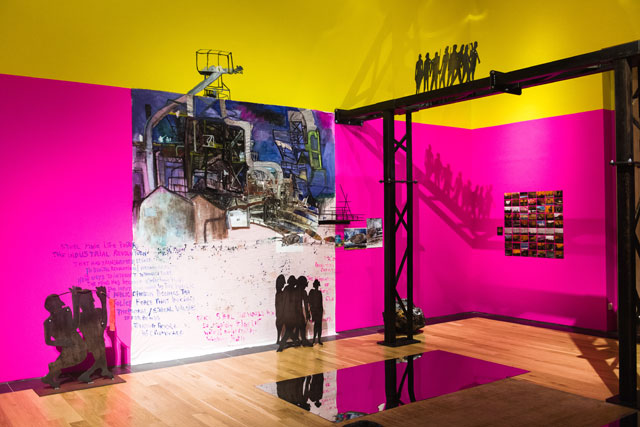 However, on entering the exhibition on the museum’s first floor, the first piece we encounter is an installation by Anna Boghiguian (b1946, Cairo) exploring the steel industry and its impact on human civilisation. A Meteor Fell from the Sky (2018) unfolds like a scattered, collaged storybook, with intensely figured drawings, slices of shimmering sheet steel, Boghiguian’s signature paper cut-outs (hard-hatted steel workers), some perching precariously on industrial structures, and mini-meteors created from mesh, concrete and paint, all set against a vibrant background wall colouring of intense pink, yellow and blue; these are the same colours that apparently burn so brightly against the darkness and clamour of a steel foundry. The Egyptian-born Boghuiguian is said to live a nomadic life and, for this piece – with the encouragement of Artes Mundi founder and curator Karen MacKinnon - she travelled to India and also to Port Talbot in Wales, to draw out stories of the associated steel magnates and their workers. 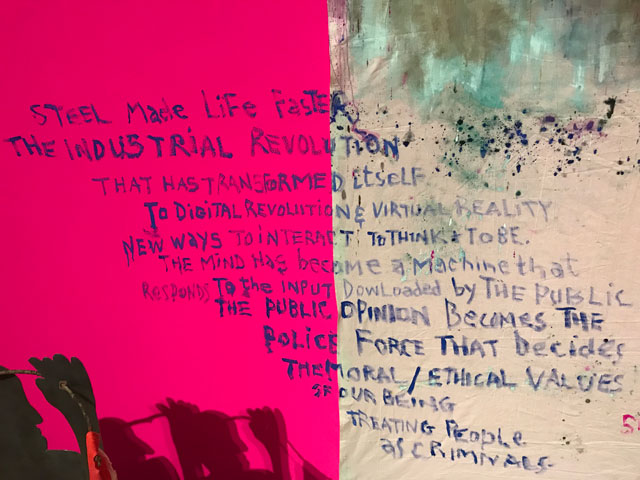 On one wall, she has handwritten one of several subtexts, describing how: “The industrial revolution … has transformed itself to digital revolution and virtual reality (new ways to interact, to think, to be). The mind has become a machine that responds to the input downloaded by the public. The public opinion becomes the police force that decides the moral/ethical values of our being. Treating people as criminals.”

She spoke with Studio International about her travels and research for this piece, the founding of India’s first steel business, Tata Steel -  which, by an interesting twist of fate, now also owns the steel industry of Port Talbot - and how this material is currently being manipulated by assorted superpowers to influence global economies and politics.

Anna Boghiguian: ‘The second industrial revolution, when they found steel after steam, totally changed the face of the world’

The Moroccan-French artist Bouchra Khalili (b1975) uses her work to give a voice to marginalised communities. Her film Twenty-Two Hours (2018) is premiered here, following two young African-American women investigating the way radical French writer Jean Genet sought to expose US racism through his support for the Black Panther party. 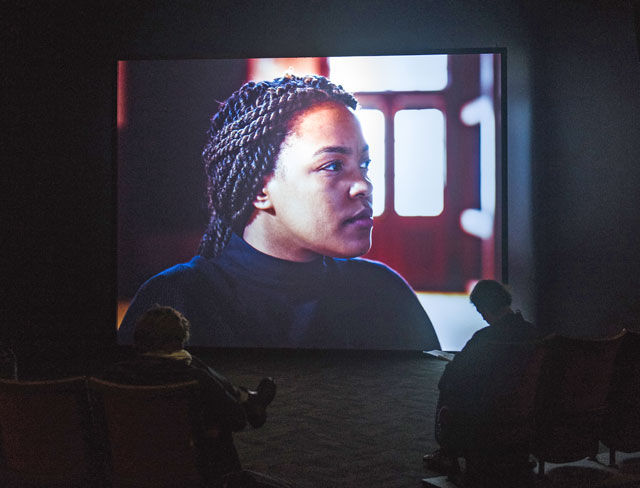 The Thai film-maker and winner of the Cannes Palm D’Or Apichatpong Weerasethakul (b1970) has been making film and video shorts since 1994, completing his first feature in 2000. He has also promoted experimental and independent film-making, championing work beyond the constraints of commercial cinema, through his own company Kick the Machine. Here, he premieres his film Invisibility (2016), a poetic (although not overtly political) meditation on estrangement and solitude. 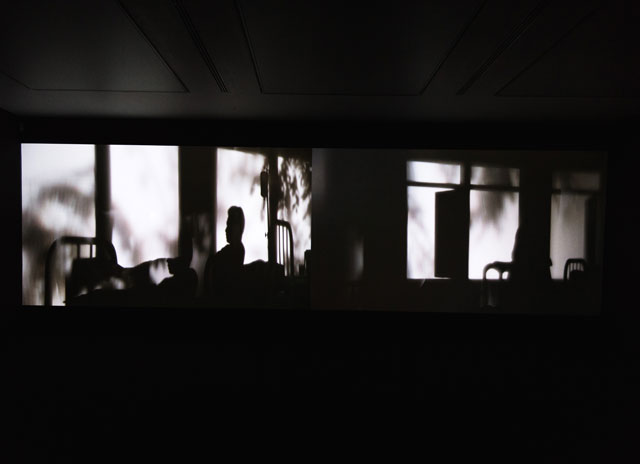 The final artist we encounter in the show is Nigerian-born, Belgium-based Otobong Nkanga (b1974), who has long been exploring - through drawings, installations, performance, photographs and sculptures - the links, both fragile and enduring, that connect  humans to the land around us via the resources we use and abuse. For Artes Mundi 8, she is showing two large works, set within a strangely somber and meditative space at the far end of the gallery, with its own pyramidal roof. Placed on a black carpet, the contemplative quality of these pieces induces an instant hush in the visitors. We see a circle within a circle of elemental items within her sculptural piece Manifest of Strains (2018), occasionally hissing loudly (to represent air) and heating up (fire). This is framed by a large tapestry, titled Double Plot (2018).

Here, she talks to Studio International about her inspirations for these pieces, and her enduring preoccupations with the reciprocity or interconnectedness of emotion and action around the world.

• The Artes Mundi exhibition runs until 24 February 2019 at the National Museum Cardiff. The prize announcement will be on 24 January 2019. 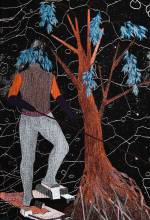 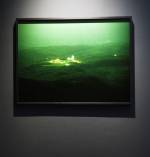