Theaster Gates: ‘How do you get people to see things that to them are invisible?’

Theaster Gates: ‘How do you get people to see things that to them are invisible?’

In his latest exhibition at London’s White Cube Gallery, Artes Mundi prize-winner and social practice artist Theaster Gates assesses the multiple definitions of assembly, from the political and the artistic to the working-class

In the press release for his latest exhibition, Freedom of Assembly, at White Cube gallery’s Bermondsey space in south London, Chicago-born artist Theaster Gates’s practice is described as “polysemous”. Poetic in sound and somewhat removed from contemporary lexicon, this term is used to describe a single thing – originally a word – that carries a number of meanings. While press releases are often guilty of calling on obscure and antiquated synonyms such as this in a desperate attempt to inspire some vague shred of excitement in their audience, on this occasion the word is expertly chosen. For beneath the eclectic surface of Gates’s latest show is a busy swarm of circling narratives that draw to the fore issues of perspective, artistry, gentrification, labour and protest.

The title of the exhibition, Freedom of Assembly, refers to the First Amendment of the United States constitution, a ruling that protects the freedom of speech, the free exercise of religion, and the right to peaceably assemble. It is the final part of this declaration that is of greatest significance here, or rather it was, for as Gates explained in an introductory press conference, while he initially intended the exhibition to present an explicit comment on sociopolitical tensions generated by the ever-diminishing freedom to assemble, over time the works collectively developed and diversified.

Granted, social comment still permeates: two pieces are constructed from the old gym-floors of closed Chicago schools, another from objects obtained from an independent hardware store now derelict as a result of conglomerate competition. But there are further inclusions that are less directly political and more personal to Gates himself. The gallery’s vast third room, for example, is populated in part by a series of large-scale tar paintings, works not rooted in conventional artistic practice, but informed instead by the basic principles of roofing – the occupation followed by the artist’s father. It is through the inclusion of these more allusive works that Gates avoids presenting an overly definitive and therefore incommodious judgment on the First Amendment. They display not argument but experience, and in doing so create a very open environment, one that aims not to blindly convince, but to incorporate many exterior opinions, situations, and stories in an attempt to formulate something more objective and representative of the view of the general population.

In this sense, Gates acts as something of a chairperson. He presents a number of wide-ranging variations on a constant theme, that of assembly, but while physically he sets these variations in stone, or rather tar, he avoids definitively demarcating their respective meanings. He leaves them open – to interpretation, manipulation and, if necessary, complete reconstitution. Meeting with the press ahead of the official opening of Freedom of Assembly, Gates was asked to explain the significance of the black and white clay figurines that are positioned throughout the exhibition. Immediately, he addressed the group as whole: “This is where you come in,” he said. “You are the ones that make the meaning.”

“You are the ones that make the meaning.” Polysemous indeed.

At the press conference for the exhibition, Gates explained what was behind his work: “The title was the real dictate of the show. When I first conceived of the title, I had created a very different show from the one that’s installed today. Initially, it was going to be a much more outwardly political, and I was going to talk more about the first amendment and the freedom to assembly.” He went on: “It would have been didactic, yes, but alongside that there would have been examples of the stuff of assembly. There would have been this politically active symboling positioned alongside the stuff of my studio, stuff that would make this symboling tangible.

“I decided not to do that. I decided instead that I would take on a much more nuanced sense of assembly, that I would talk instead about the gathering of conceptual art ideas and how those conflated concepts might create a new body of work. I thought I’d also conflate the things that were happening in my studio. So in some ways we’re just capturing the moment here and, rather than trying to create some deep, complex sense of what the title means, we’re just assembling the things that are on my mind. What I was able to do for myself was offer a fresh, new way of looking at the work that I’ve been doing, one that’s much less outwardly and explicitly social, but one that carries some of the social and political implications alongside those aesthetic decisions. Those are easily much more interesting.

“In some ways, these works are my attempt to come sincerely and squarely to a juncture of painting and sculpture. It happens to be that I am using objects that are from my world, objects that are available in the world, and maybe I am attempting to use those objects to conjure questions of a history of painting while at the same time dealing with the closure of 56 schools in Chicago. How do you make meaning out of this complicated, available material, when in fact many of these schools will be torn down? Some of them will turn into nice lofts if they happen to be in the right neighbourhood, others will just be rubble for sale or rubble that fails. I think that in those moments of tremendous catastrophe, in this case educational catastrophe, something beautiful might be born. Rather than take on the school system in an explicitly sociopolitical way, I take on the history of painting, and the gymnasium of this failed school offers me not only the opportunity to be political, but also the opportunity to be an artist, to say everything I have to say through the work.

“For the first time in my showing career, I feel that I can say things like: ‘I’ll just let the work speak for itself.’ Even if there are complexities in meaning, you won’t have me to give you a narrative, you’ll have to deal with it yourself. In that way this feels like a ‘real’ art show.”

Harry Thorne: You said earlier that you wanted to reinvest in narrative and challenge the modernist practice of obviating any loaded meaning, but there’s also a quality of randomness to your work, randomness that surely lacks the very narrative that you want to present?

Theaster Gates: If we can think about it in terms of great black musical experiences – lately [American jazz musician and composer] Ornette Coleman has been on my mind – in a way, the gym floor was a pre-existing form just like a melodic structure. There’s already prescribed form in each of the materials that I’m using, so while I have the luxury of randomness or what would seem like randomness, actually it’s not random because there’s already narrative there. Whether I put this piece of wood here, this piece of wood here, or this piece of wood here, it doesn’t matter, because it’s just a variation laid over a particular pre-existing form. In some ways, it’s the narrative of the improvisational, not the random. It’s almost John Cage like, the “I’ll begin here and see what happens” idea. That’s iterative, that’s chance, and that concept is very important to me.

I think I am always attempting to recognise where there’s inherent form, and when I know that there’s some inherent form there, then I have the freedom to add whatever I want to it. In a way, Donald Judd provides very useful foundational vocabulary. Adrian Piper as well, as a writer, is a very good foundation. Essentially, I stand comfortably on these pre-existing forms, and then I try as hard as I can to work myself out of the form.

HT: With the used materials obviously carrying so much of this narrative weight, when they’re up on the wall do you see them differently? Do they lose any of the meaning that they had in reality in this new artistic environment?

TG: That’s an interesting question. Part of the challenge with this was that when they were floors, on the floor, they didn’t mean anything. They were just floors … Why would flooring ever mean anything in a school that’s going to be torn down? So the question is this: how do you get people to see things that to them are invisible? Initially, I rebuilt the floor as an actual replica floor, and people didn’t see it. They would just say: “Oh, that’s an interesting floor!” But then when I took it off the floor and put it on the ceiling, folks went, “Wow … The floor is performing a ceiling function! That’s weird!” Only then do they stop thinking about it as a floor and start thinking about what is happening inside the form. You put it on the wall and it ceases being a floor altogether, and then people look at it with the same intelligence that they bring to artistic work. So now the question is this: where do you put things in the world that they can be evidenced in new ways?

HT: So it’s almost a question of adjusting perspectives?

TG: Exactly, and it doesn’t feel like it’s a complicated thing as much as it is a tremendous amount of work. It’s hard to de-install a gymnasium floor, clean it up, de-nail it, and then present it in a way that is fresh; it’s not necessarily complicated. You just have to ask, how do I do this?

It’s not really transforming, because it feels like all of the real work, the real labour, happens in advance of the thing becoming a work. I’m just interested in making things visible. Sometimes in order to do that you have to treat the materials in a different way, but in some cases, like in the case of the gymnasium, you simply need to physically turn the lights on, because the lights have been off for so long that there is no longer any interest in the materials that are there in the darkness. Or when there is wreckage on top of a floor, for example, you’ve just got to go and remove the wreckage. It wouldn’t be available as a work if we didn’t remove the wreckage, and maybe that’s a lot like my experience of urban space. You need to remove the wreckage in order to evidence this thing underneath that’s so beautiful. It’s always hard to see the beauty in the people and in the place unless you do a tremendous amount of cleaning up. 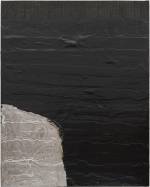 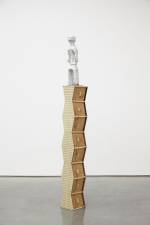