The winner of the Turner Prize will be announced on 7 December. If art holds up a mirror to society, then this year’s Turner nominees cast some thought-provoking reflections

The Turner Prize nominations are always good for a spot of controversy, and this year’s have been no exception. In 2015, the debate has focused on the inclusion on the shortlist of architecture collective Assemble, a decision that has pricked consciences in the fields of both art and architecture. If it is art, then it is a uniquely practical, life-enhancing kind of art, helping a community to reclaim the Victorian terraces of Toxteth in Liverpool that were once scheduled for demolition. If it is architecture, then it is an unusually grassroots, people-centric kind of architecture, with a legacy that should bring training and employment to a struggling neighbourhood.

Assemble’s presence in this list highlights the growing role of architects in public art. Together with Muf and Studio Weave, they have carved out a valuable role, creating public structures or landscapes which, through their choice of form, materials and narratives, transform the blandest or bleakest of regeneration zones into something quite distinctive. Artist/architect teams are also rising to prominence, such as Ljubliana-based Marjetica Potrč and Oooze, who love to invent unlikely urban experiences – a wind lift giving amazing vistas over the coast, for the Folkestone Triennial (2014) or a natural pond within a building site (King’s Cross Pond Club, 2015).

Some artists resent this incursion into their historic territory. Others just leap back over the divide, such as one of the hottest names in art, Theaster Gates, winner of the Artes Mundi prize in Cardiff last year. His skill at transforming derelict properties in his Chicago South Side neighbourhood into vibrant cultural hubs for the disenfranchised black population has made him the poster boy for community-led regeneration, turning him into a fabulous hybrid of artist, architect, developer and philanthropist. Some disgruntled art critics have suggested that Assemble was nominated only because the jury was looking for a UK version of Gates, and they were the nearest thing. But that doesn’t diminish their contribution, in my view.

For the Turner exhibition at Glasgow’s Tramway, Assemble’s exhibit has focused on utility rather than artistry, creating a partial replica in timber of one of the 10 houses they are helping to restore around Liverpool’s Granby Street. Though other activists, artists and protestors have been to those streets before, Assemble has taken the vision further, allowing the residents and their Community Land Trust (CLT) to lead the process, and then expressing their aspirations in such a way that Liverpool council agreed to the scheme. And there is certainly artistry in the way in which Assemble has devised inspirational uses for the near-derelict street’s detritus. Through Liverpool council’s deliberate policy of “benign neglect”, everything of value had been stripped out of the unoccupied terraced homes: fireplaces, doorknobs, lights, curtains, cornicing. Assemble’s aim has been to replace these elements with something that carries its own legacy of craftsmanship and care. So, together with the residents, they have cast new fireplaces by throwing leftover bits of marble, brick and plaster rubble in with the concrete mixture, making each item a unique and overt expression of the poverty of available materials married with a richness of imagination; the same is true of quirky sawdust-fired ceramic light-pulls and doorknobs, as well as a range of ceramic lampshades, bathroom and kitchen tiles and hand-block-printed curtain fabric. These items are all on display here, and are now being made for sale by local residents, through the new social enterprise Granby Workshop, which Assemble has set up using some of the money for their Tramway exhibit.

As Gates himself has said: “There’s a way in which artists might have the power to conjure the symbolic, to do things in the world that other folks couldn’t imagine.” What Assemble has done – in Gates’s footsteps - is conjure an alternative vision of communities exercising the right to reshape their neighbourhoods for their collective benefit. This is surely the headiest of provocations, at a time when careless councils and profiteering developers are demolishing habitable housing estates to throw up luxury apartment blocks for privileged executives or, worse still, the overseas elite who will probably never even live there - while social housing waiting lists get longer and longer (London’s is currently more than 350,000).

There is a thoughtful probing of alternative sensibilities in the work of two other Turner nominees. Bonnie Camplin’s The Military Industrial Complex offers a disconcerting insight into constructed realities, through a glimpse into the lives and minds of five different interviewees. Their narratives are played out (over headphones) on five TV screens placed in the centre of a set that resembles a community library: all cheap utilitarian furniture, thin carpet and harsh lighting. It’s not long before the interviewees’ stories trigger alarm bells. One claims to have been on military manouevres with mythical flying beasts; another has been subjected to mind control – and worse - by a paramilitary cult; yet another calmly relates stories of politicians and celebrities involved in satanic rituals. Arranged on tables behind these interviewees (all of whom Camplin found online), is a library’s worth of “supporting” literature for each belief system, from text books to fiction, academic papers to Wikipedia reports. Visitors are welcome to dive in and read them, with seats provided should they decide to stay awhile. As we delve deeper into the interviewees’ worlds, questions emerge about the boundaries and influences that underpin our own realities.

Janice Kerbel’s Doug is an alien exploration of sorts – certainly an exploration of an alien world. Knowing nothing about composition, she has written a 20-minute operetta about a man called Doug who dies in a variety of ways, some banal, some gruesome, over the course of the piece. Seven fatal vignettes, their self-penned lyrics reprinted on the wall behind the performance space, are sung with the utmost seriousness by six professional singers. Thanks to their skill, the music is extremely convincing as it skips from one genre to another, from Gregorian chant to medieval madrigal. The effect is disconcerting, intriguing, but ultimately unsatisfying. If Kerbel was hoping to find a new way of creating music through her unfamiliarity with the protocols and processes of orthodox music education, she has fallen short. Most of it sounds like imitation, apart from the shortest section: a thrilling, three-second burst of staccato dissonance.

But these three works are all substantial feats of the imagination, involving huge amounts of painstaking research, interrogation and artistry. All of which makes the collection of fur coats by the fourth Turner nominee, Nicole Wermers, seem less impressive. Yes, there is a haunting sense of absence – a room set with elegant chairs (reproductions of Marcel Breuer’s Bauhaus classic, the Cesca), cloaked in fur, conjures up a salon of lunching ladies mysteriously departed. But that’s all. Is the Turner about lasting impact or immediate impressions? If it’s the former, then Assemble should take the prize. If the latter, then Camplin’s is also a strong contender. Either way, these works bear witness to a more boundary-shifting, multidisciplinary, collaborative and collective sensibility across the visual arts, and a curiousity in probing our acceptance of the status quo, which I find far more invigorating than any of the currently fashionable “anthropocene” ennui.

• The Turner Prize Exhibition is at Tramway, Glasgow, until 17 January 2016. 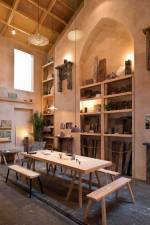