Manhattan’s storied art fair pushed back against a softening art market with strong work, mid-range sales and more than 65,000 visitors – the jury is out, though, on what was added by a new director’s ambitious overhaul 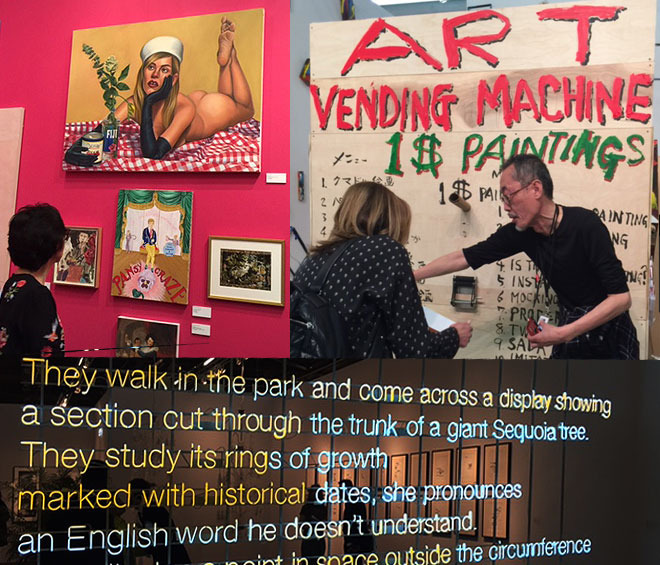 Of the 10 fairs that bedeck the annual New York moment known as Art Week, five fell by the wayside of cold wind, aching feet and the aging demographic of diehard collectors. Even the zealots pared down to the Art Dealers Association of America (ADAA), the New Art Dealers Alliance (NADA), Volta, the Independent and that elephant in metropolitan room – the Armory Show.

ADAA, in a sense, is hors competition. Located politely on Park Avenue in the actual Armory, this virtual club of galleries focused on high-end modern art doesn’t exhibit, it presents; secure in its opening slot pre-previewing the contemporary fairs, the show doesn’t hustle, it awaits. That the works are for sale feels incidental to their importance, or their rarity, or their hallowed familiarity. This year offered a fresh look at Cuban-born Zilia Sánchez’s suggestive wall sculptures, 14 atmospheric landscapes by George Innes, a group of late works by Lee Krasner, one of Larry Bell’s pristine glass masterworks and, linking past to present, a stunning lightbox triptych photomontage by Rodney Graham of the artist as antiquarian, surrounded by his imaginary collection. Comfortably ensconced in its gloriously restored Gilded Age setting, the ADAA purrs.

The Armory Show is a different cat altogether. Big and brassy in the knowledge that everyone who breathes art will stop by, it remains, despite this year’s attempt to curate everything but the air, an out-and-out selling machine. Two hundred and ten galleries from 30 countries weighed in with the best of what they could transport. To gentle the pitch, the new director and former art critic, Ben Genocchio, encouraged presenters to show fewer artists, widened the aisles, allotted large project spaces, did away with the two-pier divide separating contemporary and modern art, and gave each a new section – Presents and Insights – aimed at showing young artists and work before 2000 (both of which, many felt, had been already well covered).

The effort was noble, but I was not alone in thinking the fair curated to a fault. Everyone appreciated the breathing room created to view the 13 monumental eye-catching Platform installations and to break up the gridded cubicles with pauses that refreshed, but the uninitiated thought the spaces had been widened to ease access to the food stands and remained confused by the sectioned-out programmes. Even the floor, varnished black, felt curated. The downside to shaping material in a context that, by definition, is commercial is that close editing doesn’t translate. The average fairgoer, charging down the aisles in search of the newest, craziest and most meaningful thing, does not stop to meditate on the finer points of presentation. More critical is the question of whether a curated art fair is not an oxymoron, leaching what is essentially a caravanserai of the messy, noisy, crowded vibe that gives these great civic gatherings their mojo.

The success of this year’s Armory Show, in the end, was determined by the range and quality of material on offer. Taking into account the current move to safe product driven by an uncertain art market and a stock market soaring to thin air, the amount of fresh material and new artists was gladdening. Even galleries buoyed by such name artists as Jim Dine, Ed Moses and Antony Gormley tested new ground. Albertz Benda went interactive with Eye, a photo-booth installation by Fiete Stolte, where, for $100 (£82), you could come away with a passport-sized self-portrait of your silhouette reflected in your pupil and a booklet signed by the artist. Sean Kelly lined up three miniature investigations by Laurent Grasso – into Inca gold, salon painting and neon – and featured his newly signed artist, Shahzia Sikander, with an HD video animation that works sound into its exploration of painterly traditions.

Inexplicably, for a world glued to the screen, there was a paucity of video work, due less, perhaps, to the medium’s falling from favour than to a venue that discourages leisured viewing. Light pieces, in contrast – fluorescent, backlit, LED – turned up everywhere. Single-word conversation pieces such as RESISTERS (divided by colour to read re-sisters) and EXIT were looking their age. More of the moment, meaning interactive, a neon expletive at Leila Heller’s booth invited you behind a curtain to converse with the artist while recharging your mobile phone. Marrying light to sculpture, young Cuban artist Rafael Domenech set Fred Snitzer’s space ablaze with electrified chandeliers worked into constellations with aluminium and Plexiglas. More sophisticated, at Paul Kasmin, Iván Navarro claimed the optical field with drums that tunnel words-as-mantra to infinity. Raising light to a masterplan, London’s White Cube gallery roared back to the fair it had passed over for the upcoming Frieze Fair (as Larry Gagosian, Marian Goodman and David Zwirner are still doing) with the bravura incandescence of Welsh artist Cerith Wyn Evans’s chandeliers flickered by one of his musical compositions and a suspended word-scrim of words writ in neon that connect or divide depending on where you are standing.

Less convincing was the forced conceit of the ubiquitous written-word manifestos, risen from the ashes of the so-over cool of spray-canned walls, printed T-shirts, and Tracey Emin’s neon unprintables, to seek a new relevance in drawing-room colours with mild interrogations curated for private collections. Harland Miller’s International Lonely Guy upped the level, and Lawrence Weiner’s floor installation aced it, but sorely missing was the current genius of the genre, Christopher Wool, although his wait-listed work was channelled by a passerby wearing a T-shirt lettered POWERFUL, which, partially hidden by her jacket, read WERF.

“Unitled”, increasingly distanced from the irony referencing portentously titled work of no consequence, now flags unfocused intention or warns of an unstructured idea and mixture of media so profound as to be unreadable without captions; case in point, Pier Paolo Calzolari’s wall sculpture formed of a plastic laminate broom that is glued to a canvas prepared with milk tempera, salt and oil. Some efforts, nonetheless, proved heroic: at Pierogi, mobile phones lined up behind baseball-sized windows to capture Patrick Jacobs’s lyrical lighted landscapes fashioned from wood, hair, steel, copper, paper, talc and acrylic.

Political art popped up here and there, all of it deeply felt and well executed but oddly less angry than the current upheavals warrant. Tayeba Begum Lipi delivered a punch with her baby-carriage fashioned of cast-steel razor blades, and Titus Kaphar met collector expectations with a looming equestrian portrait of Andrew Jackson punctured with nails pinning him to the names of his slaves; but the handful of photographic works addressing migration lost their impact to the overwhelming material that scans nightly on TV, the transparent police shields worked by Daniel Joseph Martinez out of transparent plastic seemed too flimsy a response to abuse of authority, Awol Erizku’s black panther trampled on just one more American flag, and Glenn Kaino’s burning effigy (at Kavi Gupta), smouldered to cinders with an electric flame and vapour, failed to convey that the charcoal sticks inscribed with slogans had been salvaged from the recent Women’s March on Washington DC. Tellingly, the strongest manifesto, a Trump-centric video by Johan Grimonprez, was curtained-off and positioned as far down Pier 92 as you could walk.

The hawker appeal of the international Art Fair, fun and brinkmanship, won out in the end. Self-classed fine arts galleries drew attention with work that could double as decor for school theatricals, most trivially with the pastiche of life-size female astronauts at (yes) Ota Fine Arts. More effortful installations marked and dazzled.

The Pace space drew a marvelling crowd to the extraordinary achievement of the hot young team Lonneke Gordijn and Ralph Nauta, known as Studio Drift, who applied magical thinking to cutting-edge technology to levitate Drifter, a seemingly massive concrete block, with helium, cameras and fans.

Crowds lined up at the Art Vending Machine to exchange a $1 bill for a work produced and signed on the spot by Sadaharu Horio (of the Japanese avant-garde Gutai movement) according to which of the 10 categories you specified: “whipping painting” drew a banging sound followed by a bare canvas and signature; “bordered painting” put a frame around signed blank paper; “instant painting” produced a stroke of wet oil paint. I did better with “imitation painting”, which turned out a “Magritte”.

The show’s standout installation was a wildly entertaining and sophisticated reenactment of a show retitled the Collapsed Time Salon, conceived by Jeffrey Deitch, the PT Barnum of the art-world, who returned to the piers to wave his branded fair-dust of serious kitsch after a self-imposed hiatus of seven years. Conjured in his youth around the jazz-age world of Florine Stettheimer, the reenactment of her once-scandalous beach scene framed by cheap plastic curtains, magenta walls, upholstered furniture and works by her circle, presented some of the original art as well as a smattering of later works “in the spirit of Florine” by the likes of Cecily Brown and Lisa Yuskavage that were being offered for sale at no discount. “Because I don’t represent these artists,” Deitch explained patiently to a frustrated neophyte, “I don’t command the usual dealer fee, and so what you are quoted is what the value to you has to be.” (This as close to an accurate quote as my sputtering pen scribbled down.)

Breaking for coffee, I gathered the chatter. Fresh off the news of Tom Campbell’s “forced” resignation – expected, but shocking nonetheless for the message it sends about a director who failed to deliver and a storied museum’s rejection of contemporary art – the collectors I spoke to welcomed the Armory Show’s calm, steady-as-she-goes, equilibrium. Some questioned the need for new categories and many missed the past years’ area-themed presentations that had spotlighted, in turn, Latin America, China and the Middle East, but all welcomed the focus on one and two-artist booths. Those who are building collections were looking for work by Cuban artists (wondrous that the lionised Carlos Garaicoa was holding forth on his process at the Galleria Continua booth) and were buying just about anything by artists tapped for the upcoming Whitney Biennial, such as Douglas Coupland, Irena Haiduk, Henry Taylor and William Pope.L. Their wishlists extended to artists such as Alice Neel, Chris Ofili, Kaari Upson, Tayeba Begum Lipi, Jill Mulleady and Cerith Wyn Evans, who have just shown, are currently featured, or are about to show in museums and name galleries and this year’s Venice Biennale. None seemed in a hurry, though, certain that the work they were thinking about would be there the next day. And all were in bargain mode, leery of art market inflation. “Crazy prices,” as one seasoned fairgoer put it, “for artists known only to their family.”

That painting overruled manifesto, technology and even the interactive vocabulary that is becoming the only language the new buying generation speaks, says less about the moment than the Armory Show. Visits to the scrappy alternative fairs, Volta, NADA and Independent, turned up plenty of work for affordable prices by artists proposing fresh ideas – albeit many half-baked – involving active participation in a computer-designed scheme.

The Armory Show, nonetheless, remained the mothership, steering buyers and lookers through the shoals of what a rigorous selection has plucked from the flotsam and jetsam of all that’s called art, while taking the measure of the art world’s fickle mood. It heartened that this year’s consensus was safe material of high quality, to hedge a softening art market while feeding it just enough to float it for one more fair, one more season. 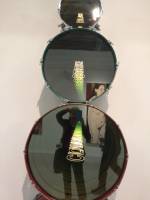 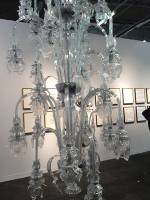 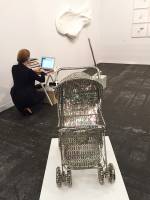 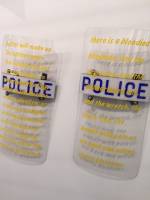 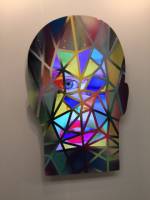 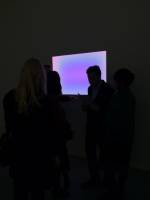 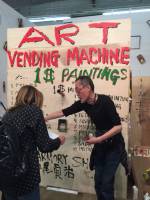 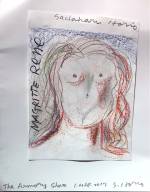 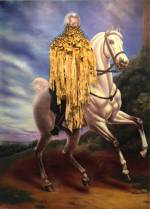 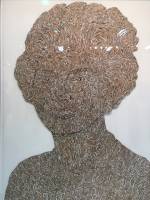 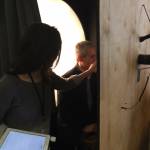 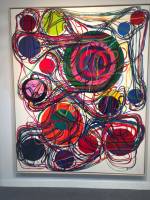