An important retrospective is at the Hayward Gallery, London, until 19 August. The work covers a wide range of Gormley's ideas. Earlier work is important, and given due precedence. But this exhibition seems to have hit a mid-point, where Gormley has big decisions to make for the future direction of his work, much of which remains of high talent.

The importance of being Antony Gormley is something we are all aware of ever since the emblematically stirring and truly successful 'Angel of the North' arose close to the North-South railway line at Gateside just South of Newcastle. However we now have a surfeit of Gormley images in London, literally spewing out (or should one say 'tripping out') of the Hayward Gallery, loitering without intent on the roof parapets of surrounding high buildings, and generally perplexing the natives and commuters. It seems that a plethora of such Gormley figures, installed previously on the tidal shores of Crosby, Lancashire, have not, as was intended, been spirited away for another day, but have been retained into the future. There now they remain, submerged and then re-emergent from the tidal ebb and flow, ad infinitum. For infinity is what Gormley is really about, a world of permanence enshrouding impermanent man. But increasingly it seems the other way round, permanent figures of Gormley, installed against a changing world. Gormley's relentless pursuit, in an aura of self-importance, of 'greatness' has now obtained a climacteric state, at London's Hayward Gallery until l9 August. There are variations of assumed 'greatness' at the Hayward now, distributed playfully around the ample rooms and spaces.

One finds one gallery now full of a mass of aluminium poles, projecting downwards from the ceiling, giving the distinct impression of back store in the IKEA retail warehouse. Another gallery room sports a clump of pierced boxes of metallic non-allure. This is entitled 'Space Station' but the visitor feels somehow entrapped within childhood screw-together kits. On an upstairs level now, 'Matrices and Expansions' offers more 'lost' figures, this time stuck inside a trap of spiralling wires. Then, redolent of some Balkan torture chamber, 'Critical Mass' (downstairs this time) has 60 figures hanging upside down. Indeed, they are precisely intended by Gormley to remind us all of serial torture and human expiry: they all seem now ready for quick immolation in a mass grave. Yet the most likely sentiment from the alienated viewer there seems more likely to be one of 'good riddance', rather than pathos or regret.

So what has been gained over two decades of 'Gorms'? Something of a decline in creative energy since 'Sense' was completed, with its neck-hole and finger and hand markings suggesting an escape, a work of substance. Likewise the replication of the Chinese terra-cotta figures was another flash of genius. Today, at the Hayward however, enclosing a cloud at great expense in a glass box, 'Blind Light', seems puerile in a manner reminscent of a fifth form physics experiment writ large. But no further explanation is deemed necessary from one moving in the Hall of Fame.

And whether one is entranced , at the entrance, by 'Space Station' and its Lego-like pile (yet another figure replication here) or pricked by the pierced 'Capacitor' (executed all of five years ago), one is detached in reality from compositions that utterly fail to simulate any human predicament on earth. 'Matrices and Expansions' for instance, edges into the scientific domains of fractals, and it in no way compensates for the state of delusion imposed on the viewer by 'Critical Mass'.

Did the Freemasons Hall across the river really seek embellishment by a 'Gorm' figure? Well, perhaps, for once, Yes; it does seem appropriate enough in its enigmatic configuration to an institution redolent with secrecy. Why not then have 'plonked' a couple more such figures upstream on the symmetrical river elevation of the MI6 Headquarters, one on each corner?

Returning now to the immediate vicinity of the Hayward, one reaches the irreverent thought that these figures are actually reminiscent of the automated figure targets so beloved of operators of military training ranges.

The Hayward Gallery has done its very best, driven by Antony Gormley to further and deeper extremes of content and expression. It seems churlish then after such a commitment by the sculptor to express disillusion and disappointment here. But in the real world of Richard Serra, Anthony Caro and David Smith (and certainly William Tucker) one is bound to think all that was what sculpture is truly about, and not this parade of figures, for the enlightenment of the future. Gormley, for the moment, simply arrests and suspends the present in a vacuum. Stop the train, I want to get off here, (but here's to the Angel of the North, pal, as Bogart would add). What is sculpture really striving for? It is hoped that, with Lottery support and public encouragement, a work proposed for the M4 close to the Severn entry point to Wales from England will go up, and tell us. It is by architect-sculptors Marks Barfield, with the support of Landmark Wales. This is the way to go forward. It takes off from the idea of Gormley's Angel. It is called 'The Red Cloud'. Lets give it a go. 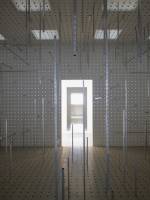