Anselm Kiefer, who was born in Germany in 1945, studied law before beginning his art education in Karlsruhe and then Düsseldorf. Now seen as one of the most successful artists of his generation, he represented his country at the 39th Venice Biennale in 1980 and was elected an honorary member of London’s Royal Academy in 1996. The Royal Academy’s current exhibition, which showcases more than 40 years of his career, is the first major retrospective of his work to be held in the UK

Written and presented by ANNA McNAY
Filmed by WILLIAM KENNEDY

The exhibition proper opens with with photographs and paintings from the controversial Occupations and Heroic Symbolsseries of the late 1960s and early 70s. Kathleen Soriano, director of exhibitions at the RA and curator of this retrospective, hopes this will surprise visitors and show them something of Kiefer’s character. For these works, he re-enacted the Nazi salute in various locations across Europe. His aim was to confront the experiences of history, rather than suppressing them, which he believed most postwar Germans did. However, his actions were not only controversial, but illegal, and led to accusations of his being neo-Nazi. This he was most certainly not, but references to the Nazis’ fixation with Blut und Boden (blood and soil) and Hitler’s belief that “true Germans” came from the soil, abound in his work. He strongly believes that landscapes must always be guilty for what they have witnessed and what has happened on them.

His ploughed barren fields suggest references to rebirth, but his recent Morgenthau Plan paintings of wheat fields are heavy in their grey and black. Despite their sombreness, they pay a dark homage to one of Kiefer’s artistic heroes, Vincent van Gogh. Their name is a reference to the Morgenthau Plan, the post-surrender programme for Germany named after US secretary of the treasury Henry Morgenthau. This aimed at demilitarising and deindustrialising Germany and turning it into a vast agricultural landscape – much like many of Kiefer’s paintings attempt to do, with their troughs and excavations, scratched surfaces, ash, rubble and ruins, soil, seeds and sunflowers – symbols of self-regeneration and new life.

Kiefer integrates text into his works, citing liberally from literary masters of the 19th and 20th centuries such as Oscar Wilde, Virginia Woolf  and Paul Celan, as well as from 12th-century Middle High German poet Wolfram von Eschenbach, to name but a few. The latter, in particular, whose epic Parzival was popularised by Richard Wagner (1813-83), who loosely based his opera Parsifal on it, is referenced readily with images of snow and ice stained red with blood and the use of the name Herzeleide, or “heart’s sorrow”, who was Parzival’s mother. The snowscapes also refer to the blanket of snow – or collective lack of conscience and silence – which Kiefer believes to have fallen over postwar Germany. And the use of traditional German epics – as well as of art itself – is a brave act of reclamation of things that the Nazis had taken for themselves and sullied.

In the heart of the galleries, Kiefer has built a site-specific installation, Ages of the World (Die Erdzeitalter), which he worked on here at the Royal Academy.

Kiefer studied law because he wanted to understand the rules underpinning why we are who we are. This question runs through much of his work and, as well as being deconstructed pictorially with his thick strokes and ruined building-scapes, it is echoed in the poetic refrains that dance across the canvases and creep out from behind images, wrapping themselves around them, caressing, strangling, comforting and assaulting them. Kiefer has spoken of poems as being “like buoys in the sea”. He is as much a wordsmith as a painter; a sculptor as much as a draughtsman. He sees painting and sculpting as transcendent processes and began them as he sought a means of expression, saying: “It begins in the dark after an intense experience, a shock. At first it is an urge, a pounding. You don’t know what it is, but it compels you to act.” Indeed, Kiefer’s works embody action, impulsion and a continual questioning of: “What’s out there?”

His works are also alchemical. In one room he has created his own universe with sparkling diamonds, set into lead, as stars. In the final room, he has created a forest – an installation through which visitors can walk – with its format echoing the pages of a book. Here he speaks of Melancholia, a concept associated with artists since Albrecht Dürer (1471-1528). The pages of the books are open, just as they are in his lead books, also on display. There is more to be written, more to be read. With a long career behind him, Kiefer is still going strong and producing work with as much gusto as ever. He is an open book, whose ending has not yet been written. 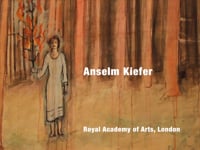