The spectre of conflict haunts the powerfully enigmatic oeuvre of one of Poland’s pre-eminent postwar artists, at long last the subject of a solo exhibition in the UK 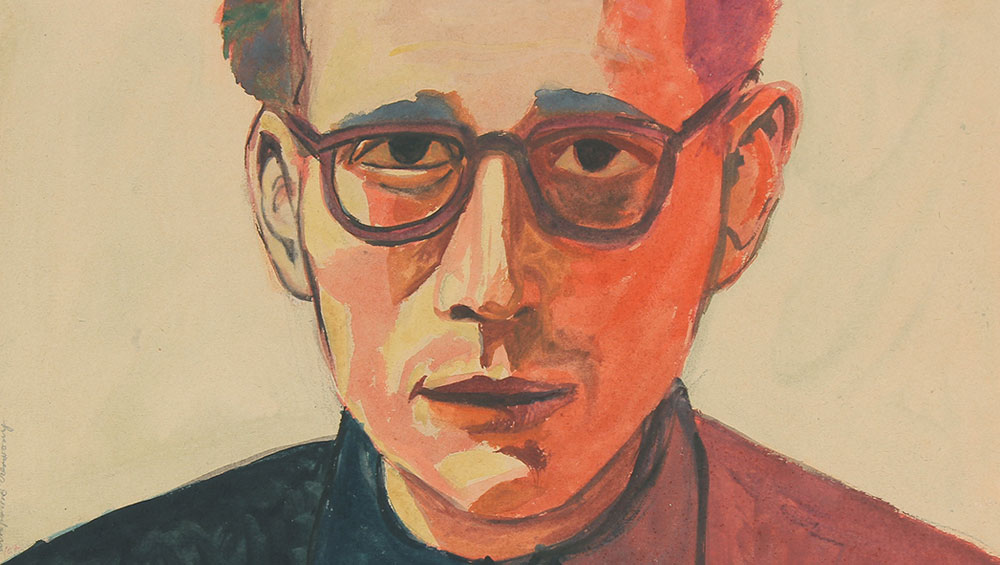 The art of Andrzej Wróblewski (1927-57) is full of gulfs. In one ink drawing, undated and untitled, like the majority of his works on paper, a cityscape is clustered in the distance behind a vast, featureless purple field. In another, three people lie in agony in a meadow that is defined only by the lines demarcating the rows of absent crops. And in Blue Chauffeur (1948), we see the back of a driver as he escorts us along a featureless stretch of white road, under a bloody red sky. There is no end in sight. Where are we being taken? Will we ever come back? The chauffeur and everything in his car is blue, a colour Wróblewski often used to signify death and immateriality. To the driver’s left, above an empty seat, the front of the vehicle contracts into a scrunched-up abstract pattern, eventually disappearing into a void. As so often, Wróblewski teases with enigma while withholding the likely traumatic answers. 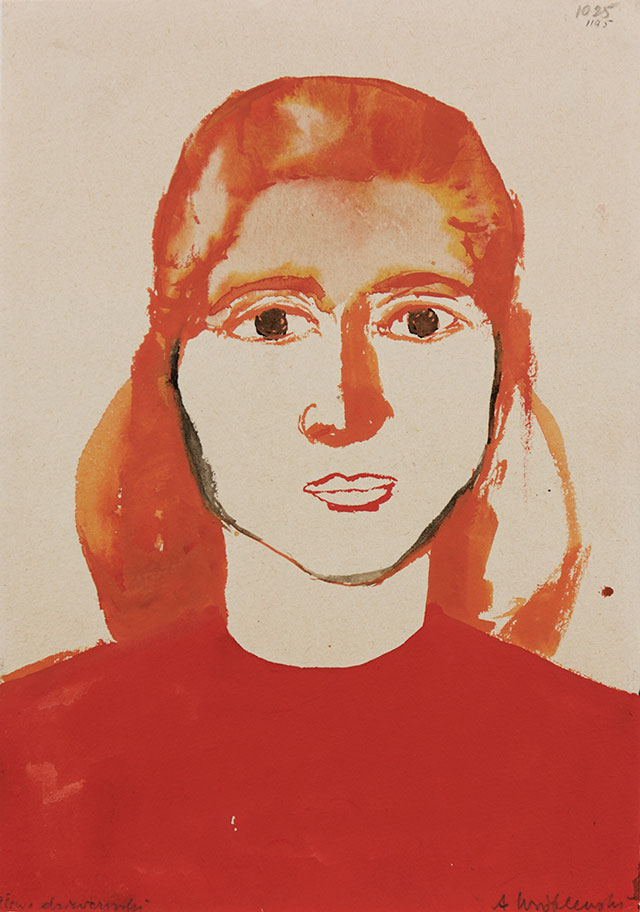 Wróblewski is one of Poland’s most significant postwar artists. As with many of his central European contemporaries, his work has long been obscure outside his own country. This has begun to change. In 2015, an exhibition of his double-sided pieces was arranged at Warsaw’s Museum of Modern Art before touring to Madrid’s Reina Sofia; the same year, a group show with René Daniëls and Luc Tuymans was held at London’s Drawing Room. This is a welcome revival. Wróblewski’s all-too-brief career, cut tragically short by a mountaineering accident at the age of 29, was both creatively rich and quantitatively profuse, yielding about 150 paintings and many more gouache and ink drawings. Now, London’s David Zwirner is presenting Wróbleswki’s first solo presentation in the UK. It is a welcome primer to a body of work that roves between figuration and abstraction, the monochromatic and the motley, taking in portraits, crowd scenes, landscapes and still-life. 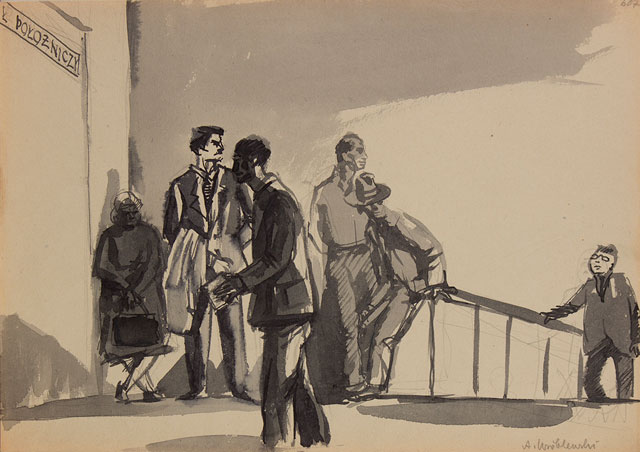 As one might expect of an artist of his nationality and generation, the spectre of war looms over a sizeable proportion Wróblewski’s work. Born in the then Polish-occupied territory of Vilnius, as a teenager he witnessed the German invasion first hand; his father died from a heart attack during a raid on their home. In 1949, while a student at Kraków’s Academy of Fine Arts, he commenced his Execution series, a succession of pieces depicting figures in the moments before their ends. These are striking for their refusal to engage with melodrama. A gouache and ink sketch for the sequence (1949) shows a family lineup, their features rendered in the pale white of innocence, while behind them stands a cabal of soldiers with grotesque, almost demonic faces. Despite the impending atrocity, the piece has a curious tranquillity. The violence and shock characteristic of the great 19th-century execution paintings – Goya’s The Third of May 1808 (1814) and Édouard Manet’s Execution of Emperor Maximilian (1868-7) – have been muted. 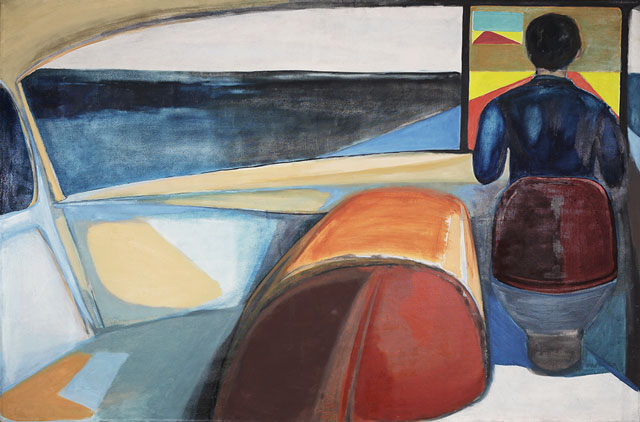 In 1948, Wróblewski had founded the Self-Teaching Club, a group of students (including Andrzej Wajda, who was to become the great film director) who rejected the colourist doctrine of their teachers in favour of the socialist realism prescribed by communist society. “Only realist painting,” Wróblewski wrote in a 1950 essay, “can exert social effects in today’s Poland.” Yet even at its most figurative, his work never abides fully by the conventions of that stodgy genre. The Liquidation of the Ghetto (1949), on the other side of Blue Chauffeur’s canvas, is an image of resistance not entirely unlike those on Poland’s Holocaust memorial sculptures. At the centre stands a gun-yielding, resistant figure, her face calm with quiet resolution. To the left, a woman holds up a prone, possibly dead, child, an act that obscures her own face; to the right, a man looks behind into the gloom. Another woman lies on the floor with her hands over her eyes, shielding herself from the misery to come. Yet there is nothing staid and monumental here: Wróblewski’s people are real, not idealisations. And, despite the calamitous situation, there is no prescribed emotional trigger. 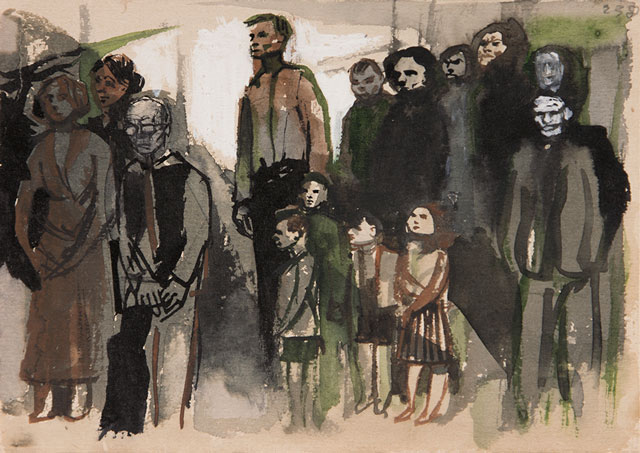 Unease haunts even the apparently innocuous corners of Wróblewski’s oeuvre. One drawing shows a hospitalised girl sharing a moment of reassurance with a visitor, perhaps her mother, who points outside as if signalling imminent freedom. Although there is a joy in their faces, the spectre of illness is around us. An adjacent piece, Group Scene No 238, shows people queuing up on a hospital stairwell, waiting to discover their own fates. Another composition, from the more avant-garde facets of his career, has a prone man entombed in an early Mondrian-esque grid of white and blue quadrilaterals, as if he has been quartered, counted, reduced to a unit: a speciality of both the wartime Nazi regime and the Stalinism that followed. Abstraction becomes an instrument of oppression. One watercolour, from Wróblewski’s Tombstone series, even has a form akin to Christ on the cross become a patterning of abstract shapes, topped by only the most rudimentary of heads. 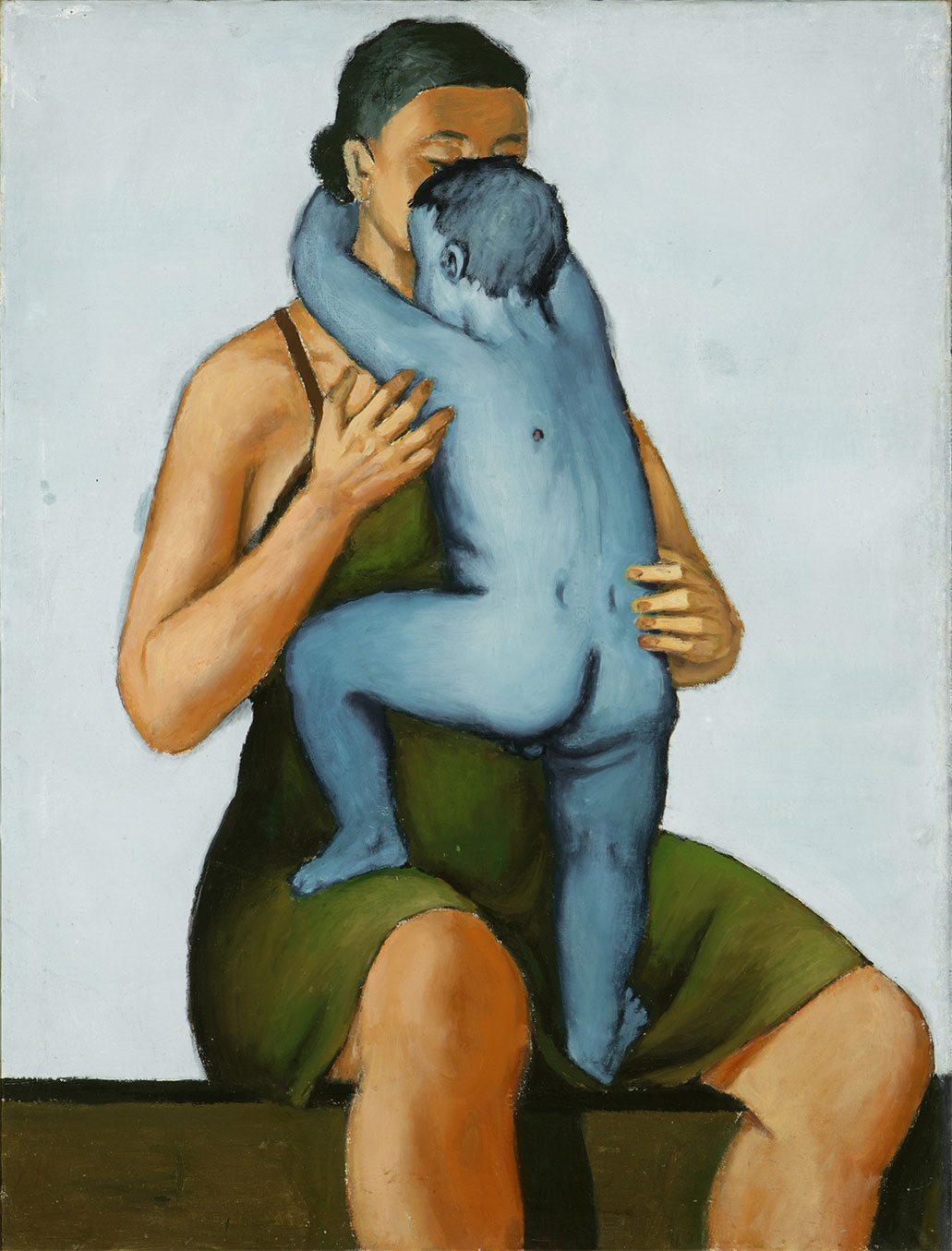 Wróblewski’s vision is made all the more disturbing by his acute sense of the masquerade, which sometimes shades towards the grotesque. A gouache portrait titled The Dead shows a grim red skull gloating at its human viewer, as if wearing a theatre mask. Another, in watercolour, gouache and ink, has a visage blotched with sickly green spots; it looks like a character from some alien drama. In The Antiquarian (1955), one of the few titled and dated works on show, the putrid, clown-like figure of the title stares into a pristine classical bust whose eyes beam out like those of the living. Which of the two, it seems to ask, is the real instrument? Wróblewski’s work is rife with such mysteries. It is fitting that the most self-possessed portrait here shows the artist himself – confident and wry, in forbidding red hues, keeping his secrets closely guarded. He knows that he can keep us guessing to the end. 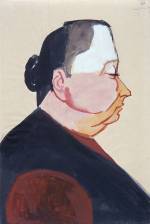 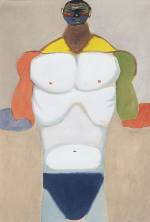