For the 350th anniversary of Rembrandt’s death, the Rijksmuseum is staging a once-in-a-generation exhibition – 22 paintings, 60 drawings and 300 prints. It is extraordinary, revealing, inspiring – and a little overwhelming 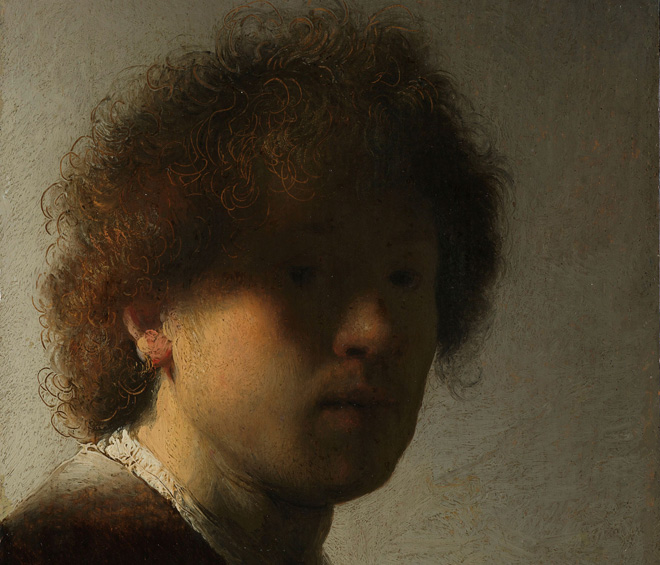 All The Rembrandts starts as it means to go on – inviting us to meet the Dutch master, the man and his art, as one. Rembrandt Harmenszoon van Rijn (b1606, Leiden) depicted himself more often than any previous artist, and the first room in the Rijksmuseum exhibition is full of his face. It begins with Rembrandt’s painted self-portrait at the age of 22, which instantly declares that he is different, an artist who, even at this early stage, ploughs his own furrow. His face is in shadow, eyes looking out from beneath a mop of curly chestnut hair highlighted with lines intricately inscribed in the paint with the handle of his paintbrush. It is striking, original, intimate.

Opposite hangs Self-Portrait as the Apostle Paul, showing the artist at 55 (and appearing older) looking at us directly and disarmingly. Despite being in the guise of another, it is an equally intimate, wrinkles-and-all portrayal of Rembrandt, gummy and turbanned, scarred by difficult life events including the loss of his wife and three children, as well as bankruptcy. It is also, of course, the saint – but unidealised, totally human. This is a universal biblical character as one of us. Rembrandt does the same in his “histories” – humanising the story and shunning the most famous moment in a story for the one with maximum emotion.

In the smaller self-portraits between the two paintings, we find Rembrandt practising these emotions on himself. We see him smiling, chortling, frowning, astonished and confident beneath a broad-brimmed hat at a rakish angle. Don’t miss the lively Self-Portrait in a Soft Cap (1634). You will have seen it at the entrance, vast and blue – it is the exhibition logo – but the original is a delightful miniature etching, just 3cm tall.

Paintings are mixed with drawings and etchings throughout the exhibition and, although the rooms are arranged thematically – self-portraits; the world around him; portraits; storytelling – this show also sets out to reunite the artist’s life and work (often divided, or over-romantically connected, in the annals of art history). So keen is the Rijksmuseum on this reunification, that in place of a catalogue, it has produced a new, thoroughly researched and highly readable, illustrated biography, Rembrandt: Biography of a Rebel, written in English by its own Jonathan Bikker. Both the themes and the biography succeed as ways to present the work, but it is a shame that they do not slot easily together.

There is a preponderance of early work at the start of the show, with pieces from Rembrandt’s hometown of Leiden as well as his first years in Amsterdam at the height of the Dutch Golden Age. The faces of Rembrandt’s parents are used as models and his wife, Saskia, appears, unnamed in evocative little studies as well as in finished images. She is frequently in bed, where she spent much of their marriage. Wed in 1634, Saskia died just eight years later, shortly after the birth of their fourth, and only surviving, child, Titus. We meet him later in the show, intimately, almost gently, portrayed – with a face notably like his father’s – in a 1656 etching, and a 1660 painting In Monk’s Habit.

Rembrandt’s only still life painting, Still Life with Dead Peacocks c1639 – arguably more genre than still life since the girl looking curiously at the dead peacocks is such a crucial part of the composition – hangs here along with a plethora of images of day-to-day life. The Rijksmuseum director, Taco Dibbits, suggests: “Rembrandt was, in a sense, the first Instagrammer.” I’m not sure about that, but he does capture to perfection vignettes of life on the street: from Leiden’s beggars, people peeing, and bathing women (real women, with cellulite and marks from their socks) to more narrative moments such as The Pancake Woman (pen and ink, c1635) in which a man digs deep into his pocket for money to pay for the pancake his child is eating. The gnarled old pancake-seller looks up, back hunched over her hotplate, while a couple of boys – depicted with just a few dynamic strokes – play-fight in the background.

If this were Instagram, some of the images might be considered clickbait (attributions were, in fact, questioned in the 19th century when prudish connoisseurs could not accept that the great Rembrandt would depict such scenes). But Rembrandt had to sell pictures, too. The Flute Player (etching, 1642) looks innocent at first glance, but closer inspection reveals it to be better suited to its old Dutch title, The Scoundrel. The bright eyes of the flute-player are lasciviously focused right up the skirt of the young woman who sits making a (symbolic) wreath of flowers – and his flute points suggestively, too. Many of the pictures here repay close examination – and there are hundreds of them. This is not an exhibition to be rushed.

Due to their fragility, display of Rembrandt’s drawings and etchings is severely restricted and to see such a range is rare indeed. All but two of Rembrandt’s surviving prints are in this show, each represented by the best imprint from the Rijksmuseum’s expansive collection. Besides the faces and street scenes, there are animals, naturalia (which Rembrandt collected), bible stories and landscapes - often inspired by his walks in the countryside around Amsterdam. The Three Trees (1643), Rembrandt’s largest landscape etching, for instance, is an almost Turneresque “meteorological melodrama” (as Bikker calls it) in which three trees stand atop a dyke against a partly thunderous sky that dwarfs the rest of the landscape. Rembrandt produced this the year after Saskia died, a period in which he seems to have struggled personally and professionally.

Rembrandt van Rijn, Militia Company of District II under the Command of Captain Frans Banninck Cocq, Known as the Night Watch, 1642. On loan from the City of Amsterdam.

His last big piece before this dark period is now probably his most famous. The Night Watch is so large that it has not been moved into the exhibition, but remains upstairs in its usual Rijksmuseum gallery. Rembrandt was more than capable of producing typically lustrous Netherlandish portraits – witness the exquisite lace and immaculate, luminous shoe decorations in the recently acquired full-length portrayals of Marten Soolmans and Oopjen Coppit. But he was also a creative rebel and, in The Night Watch, he took the traditional military group portrait and threw it up in the air, scattering it into action across the canvas. This spectacular painting is worthy of a visit all its own and, fortunately, will remain on view when this exhibition closes in June, despite being the subject of a major conservation project. The entire process from research to restoration will take place in front of the visiting public.

Rembrandt van Rijn, The Wardens of the Amsterdam Drapers’ Guild, Known as The Syndics, 1662. On loan from the City of Amsterdam

The Night Watch is not the only revolutionary group portrait in the exhibition. Two decades later, The Sampling Officials of the Amsterdam Drapers’ Guild, better known as The Syndics (1662), did for formal “round-the-table” portraits what The Night Watch had done for the stiff-standing military. Place yourself slightly left-of-centre when viewing the painting and you are the person interrupting their meeting, the person to whom each of the men is reacting in a different way.

Rembrandt did not usually go in for specific preparatory drawings, but there is one pen-and-ink Seated Syndichere, as well as a single image linked to the artist’s late masterpiece, known as The Jewish Bride (c1665). The pen-and-ink Isaac and Rebecca Spied Upon by Abimelech (1654) is regarded by the Rijksmuseum as deciding the long-debated subject of the painting. The sketch shows Isaac and Rebecca – married but pretending, for fear of attack, to be brother and sister – caught fondling by King Abimelech. In the painting, Abimelech has disappeared and it is we who catch a real Dutch couple in a moment of tenderness.

Rembrandt van Rijn, Isaac and Rebecca, Known as The Jewish Bride, c1665–69. On loan from the City of Amsterdam (A. van der Hoop Bequest).

This episode in the story of the much older Isaac and his young love is rarely depicted, and Bikker connects it to Rembrandt’s own late love – the much younger Hendrickje Stoffels – who, after 15 challenging years and one daughter together, died shortly before this painting was made. Rembrandt, as ever, is shunning formality and the popular scenes from the story in favour of the most emotional moment – and this painting has moved many. When Vincent van Gogh first saw it, he wrote to his brother: “What an intimate, what an infinitely sympathetic painting.” He would have recognised some of its techniques, too – methods revolutionary in Rembrandt’s time. The paint is in places laid on with a palette knife, and it lies so thick on Isaac’s sleeve that you want to reach out and finger the 3D texture of the shimmering fabric that scatters light like a Monet.

Rembrandt died with no money in the coffers. He may even have been “borrowing” from his daughter’s inheritance. But the richness of his work was undimmed, his innovative spirit as sharp as when he was 22, and this remarkable exhibition is the perfect place to immerse yourself for as long as you can spare in the life and work of the greatest Dutch master.