Works by Frank Auerbach (b1931) are temporarily housed at the headquarters of Dutch art in this special display organised by the Rijksmuseum and the Ordovas Gallery in Mayfair, London.

Titled Raw Truth, the display shows six Auerbachs opposite five Rembrandts. Both artists are central to art history, yet before visiting the show, I was perplexed by the apparent connection between the two greats. The exhibition follows the “special display” format established by the Rijksmuseum, in which works inspired by the Dutch masters are brought into the galleries to encourage comparison and reflection. Previous displays have seen works of Joan Miró (2010), Anselm Kiefer (2011) and Edgar Degas (2011).

Auerbach escaped the Nazi regime, arriving in Britain as a child in 1939 after leaving behind his parents, who would later become victims of the concentration camps. While studying art in Britain, Auerbach became interested in Rembrandt's work and how he captured the astute realism of his subjects.

In a sister exhibition, Auerbach's works were previously displayed at the Ordovas Gallery. At the Rijksmusuem, Auerbach enters Rembrandt’s home ground, where his famed work The Night Watch (1642) hangs at the top of the grand Gallery of Honour. Hordes of tourists surround this vast painting: it owns the room. As the first contemporary artist to show in the newly renovated Rijksmuseum, Auerbach fares remarkably well. The abstract works are assimilated into the museum – they don't stand out, but are equal and in league with the Dutch masters. Auerbach’s works are as monumental, but this status is achieved in a totally different way.

The special display occupies one alcove of eight within the Gallery of Honour. It is central to the museum, and the works of the artists represented here – Rembrandt, Vermeer, Jan Steen and Frans Hals among others – are some of the highest valued in the Netherlands. Rembrandt’s works lies in opposition to Auerbach’s. It is a proud contest of attention as I enter the hall and swerve at the last minute towards the Auerbach. A small paragraph of information is displayed discreetly on the wall; there is no leaflet or paper to accompany it. Auerbach is assimilated within the natural rhythm of display and, despite obvious contrasts, Auerbach is assimilated within the natural rhythm of the gallery.

Primrose Hill, Summer Sunshine (1964), Primrose Hill, Winter Sunshine (1962-1964) and Primrose Hill, Spring Sunshine (1961-62/1964) occupy the long wall of the rectangular alcove. The works are sculptural, existing in three dimensions of clotted oils where horizontal lines dominate the composition like those on a desert. Across the Gallery of Honour, Rembrandt’s works lie in a polar opposition of style. These hugely realistic works offer up the truth, still raw, but on a different platter. Here, sculpture exists within the image, his subjects are brought out of the frame through cleverness of pose, careful highlights and tonal sculpting. The central work, The Wardens of the Amsterdam Drapers’ Guild, known as The Syndics, (1662) is an example of this; the group look up from their work, caught poring over the accounts, mid-conversation and rudely interrupted by the artist, their expressions inquisitive. The men are romantically haggard with wispy grey hair and variations on beards and moustaches. Their uniform, worn with pride and conservative neatness consists of black hats and robes with white collars. Retreating to stand in the centre of the hall, I look right, then left, then right again. It is clear these works are opposites, yet how do they appear to mirror each other? Rembrandt’s limited yet strong palette of blacks, browns, reds and whites is evocative of Auerbach's work, and it is the colours that resonate across the space. It is an inverse echo effect: where Auerbach uses lowlights of darkness on stretches of ochre, Rembrandt uses highlights of white; hands and faces progress towards the viewer from the depths of the scene. The Gallery of Honour, too, has its own colour scheme. The walls are dark grey and a border of yellowy light wood floor is visible under the grey carpet. The decorative patterns of vines and stars that follow the arches are layers of deep reds, dull yellows and dark teals. It is an immersive environment that could not be achieved at a commercial gallery in Mayfair.

It is not only colours, but compositions that are reflected. In opposite alcoves, two portraits are placed on adjacent walls. Rembrandt’s Self-portrait as the Apostle Paul (1661) and Rembrandt’s Son Titus in a Monk's Habit (1660) on one side and on the other side, Auerbach's Head of EOW (1964) and Head of EOW II (1964). Styles can be directly cross-referenced and parallels can be drawn between the treatment of paint in these works. In both artists’ works, on different scales, oil paint foams and crusts into a rich, hardened gloss. The surface is where we see an accumulation of thought with continued concentration on certain areas of the canvas. For these painters, realism came with study and understanding of the subject, and both men are similar in their working commitment to painting, being an occupation that truly occupies.

Auerbach is an asset to the Rembrandts in the Rijksmuseum collection, prompting fresh observations that reveal a new attention to surface texture; another type of realism. Capturing the attention of tourists of all ages, nationalities and interests from the heavy footfall through the Gallery of Honour, Auerbach's work stands up alongside the Dutch Masters and does not get lost in the crowds. 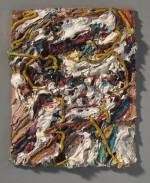 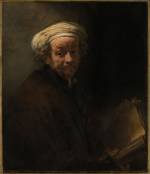