The work of painters Alan Davie (1920-2014) and David Hockney (b1937) has rarely been considered together. After all, Davie’s wild, almost shamanic gestural painting and Hockney’s colourful abstract works do not, at first glance, seem to have much in common. In this exhibition, however, their early work and shared history is brought together to show points of convergence and argue for a dialogue between the two bodies of work that goes beyond the simple fact that the two men worked at the same time.

The exhibition’s entrance, as you would expect, acts to situate the viewer with an early self-portrait by each artist, some exquisite early drawings and paintings, and photographic portraits of both artists – a young Hockney is photographed by Lord Snowdon in 1963 while Ida Kar captures a youthful Davie in 1959. The self-portraits, Davie’s oil on wood from 1937 and Hockney’s collage on newsprint of 1954, couldn’t be more different. What is evident in them and in the photographic portraits is that, while the artists have a very different approach, both were equally invested in the self-fashioning of a particular artistic persona at an early stage in their career. 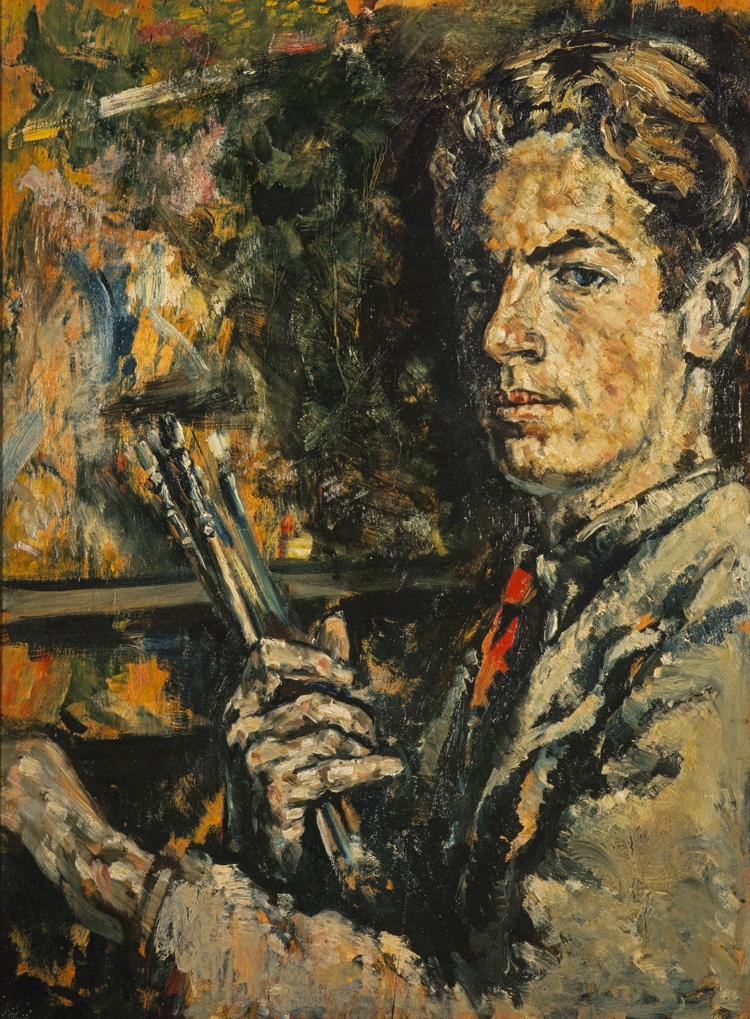 Alan Davie. Self Portrait, 1937. Oil on wood. National Galleries of Scotland. Purchased with the support of the Heritage Lottery Fund and the Art Fund 1997. © The Estate of Alan Davie. 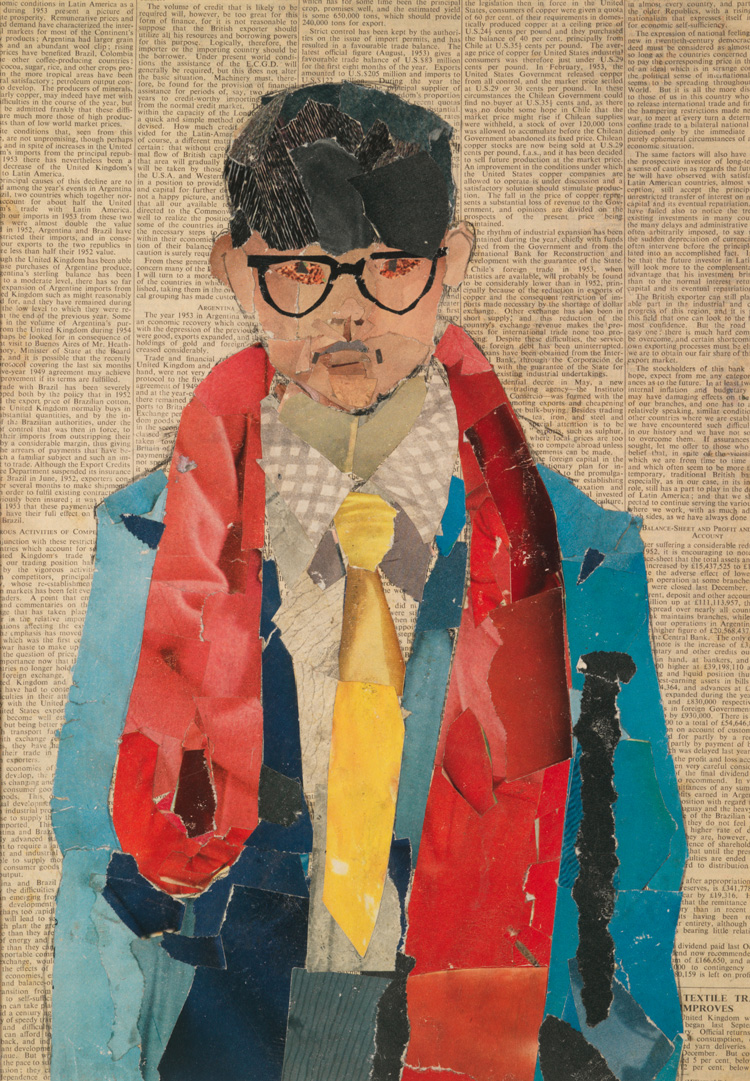 Hockney encountered Davie’s work in Wakefield Art Gallery in 1958, the year before the younger artist went on to study at the Royal College of Art in London. This was Davie’s first solo exhibition in a public gallery in Britain and seven of the paintings from that exhibition are shown together in the Hepworth to give a sense of the impact they must have had in what was a pivotal moment for Hockney, whose own work soon shifted to abstraction. Davie’s phenomenal Marriage Feast or Creation of Man triptych of 1957 dominates this room. Its turbulent agglomeration of swirling shapes and symbols in black and white paint is supported by, and interspersed with, deep-sea blue, ox-blood red and ochre. Yet while individual elements of the painting suggest chaos and movement (as well as his interest in contemporary art, jazz and poetry), the overall effect is one of coherence and calm. 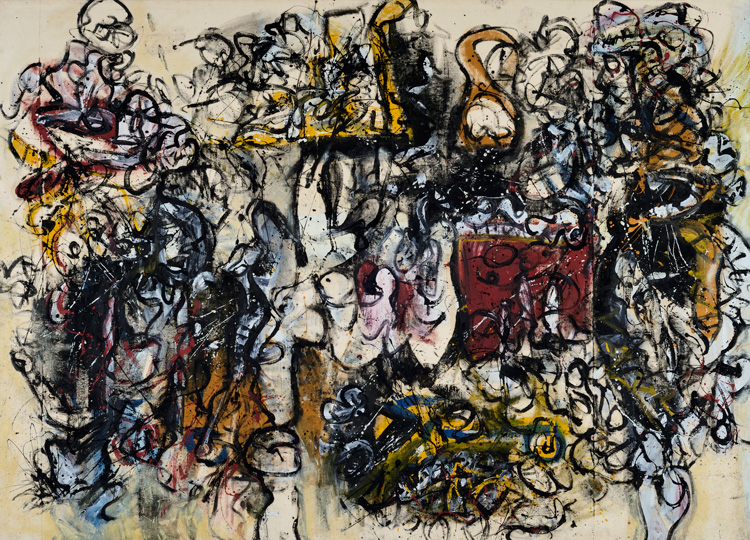 The theme of creation, mentioned in the work’s title, is a theme that recurs in nearby paintings, too – Ghost Creation (1951), Blood Creation (1952) and Creation of Eve (1956), for instance. Although Davie acknowledged the importance of sexual forces in his creative process, the religious allusion in his titles at this time also reveals something of his European travels of the late 1940s when he had an opportunity for close examination of Byzantine and Renaissance art. At the same time, his expressive, gestural, inchoate manner of working is more akin to American abstract expressionism of the period, which isn’t surprising when you learn that he admired the work of Jackson Pollock. It was on a visit to the Peggy Guggenheim Museum in Venice in 1948 that he first encountered Pollock’s work and, when Davie visited New York in 1956, he met Pollock, along with Mark Rothko and others. 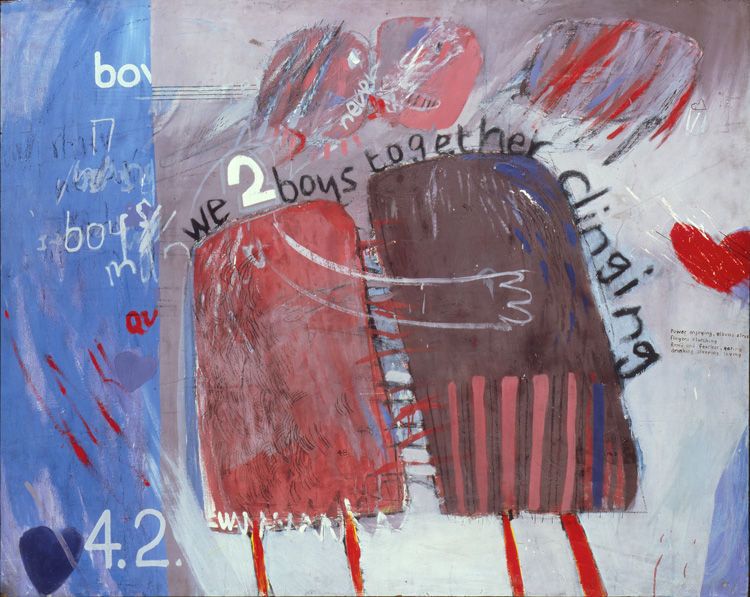 Taking Davie’s 1958 Wakefield exhibition as a starting point, this exhibition shows the shared interests of Hockney and Davie in poetry, and in human love and passionate encounter. Davie had been a poet before he began making images – he was especially interested in the work of American poet Walt Whitman – and that use of language translated into his paintings in works such as Bird Alphabet (1955). This use of letters and words was also picked up by Hockney and can be seen in works such as his well-known We Two Boys Together Clinging (1961), after Whitman’s poem of the same name. Whitman wasn’t their only shared poetic interest and both painters also looked to William Blake and others. 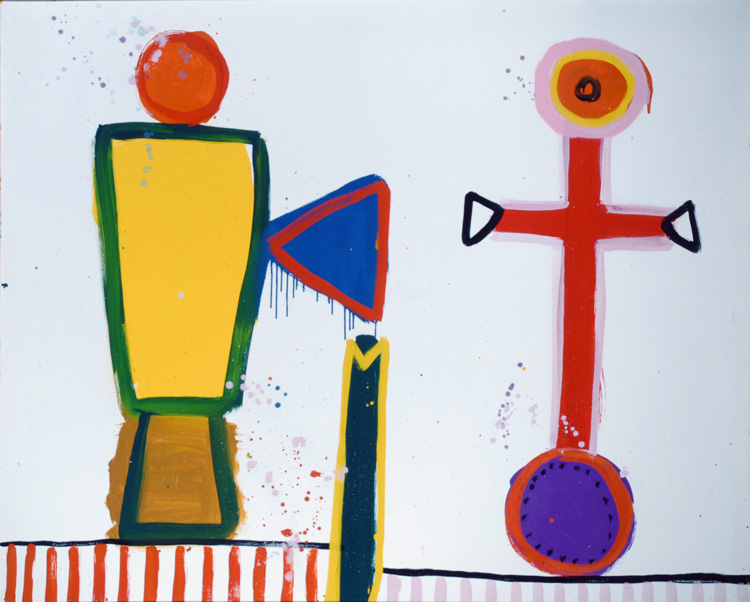 Alan Davie. Cross for the White Birds, 1965. Oil on canvas. © The Estate of Alan Davie. Image courtesy The Hepworth Wakefield. 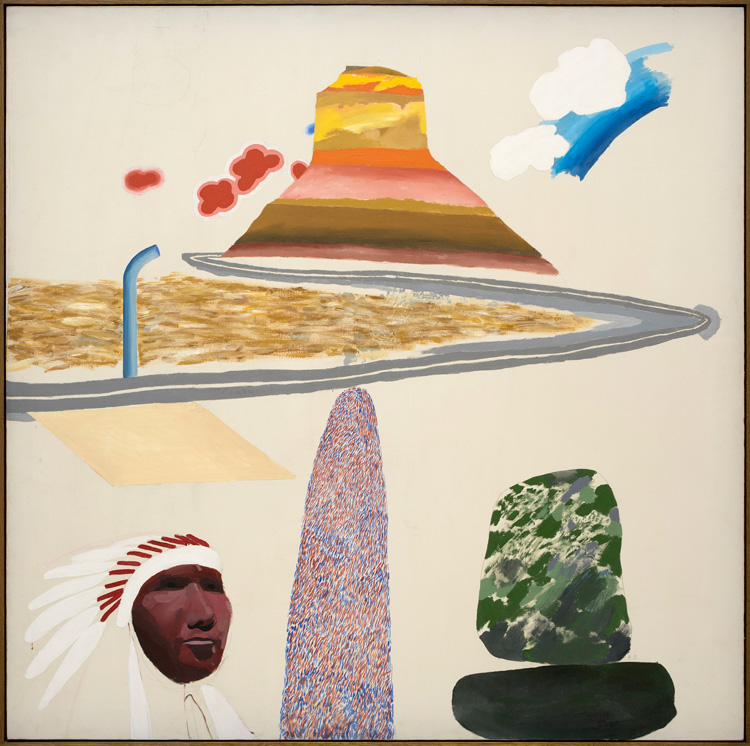 The lush life of the swinging 60s is the focus of the final and largest space of this exhibition. At the far end of the gallery, we see both artists engage with the past civilisations of Egypt and America, with Davie’s Cross for the White Birds (1965) and Hockney’s Arizona (1964). 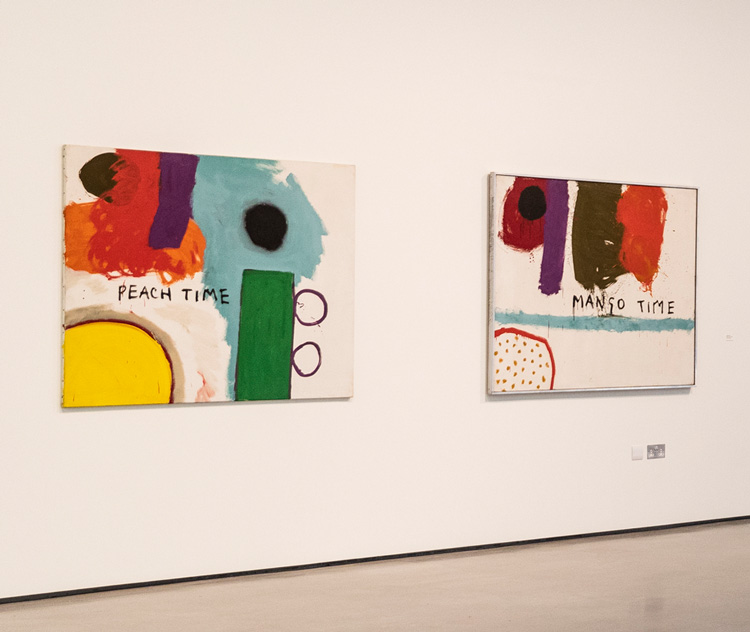 On another wall, Davie’s Peach Time and Mango Time, both of 1961, are hung together and also feature in a film of the artist working. The archival film footage is informative and engaging to watch. In a short film of the artist painting in his studio in 1961, the bare-chested Davie is lean and muscular. The parallels with Hans Namuth’s images of Pollock painting are clear and the sheer physicality of the process of painting for Davie is immediately apparent.

In the early 60s, Davie and Hockney appeared in the newly launched and influential Sunday colour supplements. Lord Snowdon also photographed them for the publication Private View: The Lively World of British Art (1965). Some nice examples from these publications are shown alongside the works in this last room, as if to gesture to the wider influences of both artists. In Private View, Davie is shown painting canvases on the floor, in the style of Pollock, alongside more intimate shots of him clipping his pet poodle and playing the flute. Hockney, meanwhile, gives nothing away in photographs that show him smoking a cigar in front of one of his own paintings and walking along a London street dressed in a gold-lamé jacket. The self-fashioning seen in the early self-portraits at the beginning of the exhibition re-emerges in these later examples in popular culture. 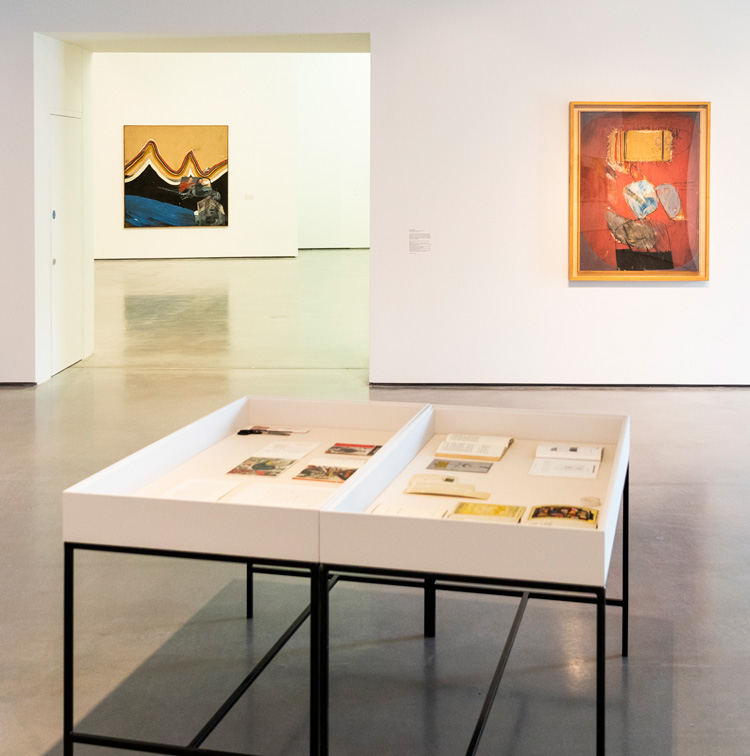 The Sunday Times Magazine of 2 September 1962 featured an article by the art critic David Sylvester, who commented on the sheer size of Davie’s paintings and their visceral nature: “Painting big means painting with man-sized gestures, putting it on with a swing and no cramping of one’s style.” Still, for me, it is the smallest works in this room that are perhaps the most intriguing in the exhibition. A number of rarely seen small collages by Davie are delightful. These also act to remind us of his dialogues and associations with other artists of the time, such as Eduardo Paolozzi and Richard Hamilton, both of whom were making similar types of collage works. The whole point of this exhibition is to show the affinities between Davie and Hockney in these early works and it does that in an engaging manner. Still, it is good to see artworks and archival material that gesture towards the wider art world, and other artists, and the inescapable sphere of influence that every artist operates within. 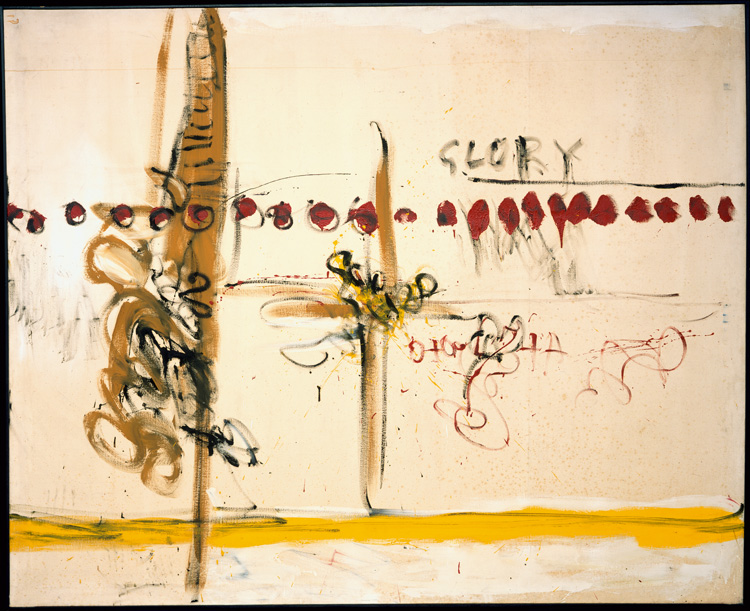 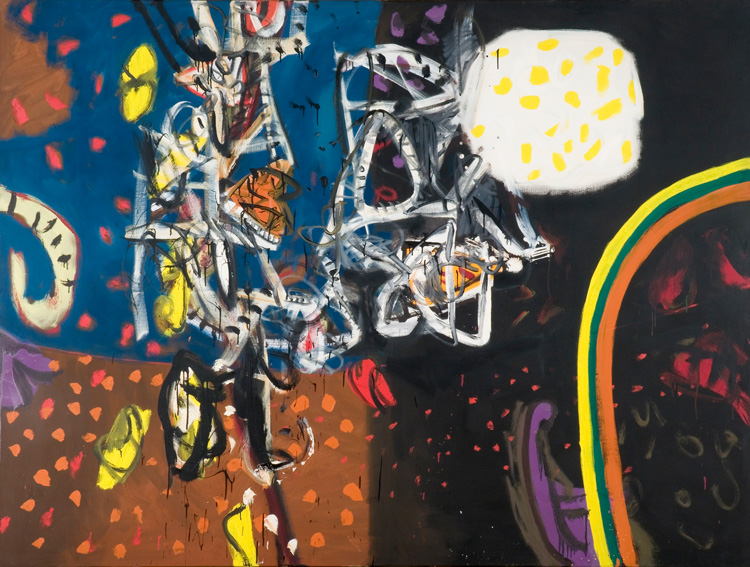 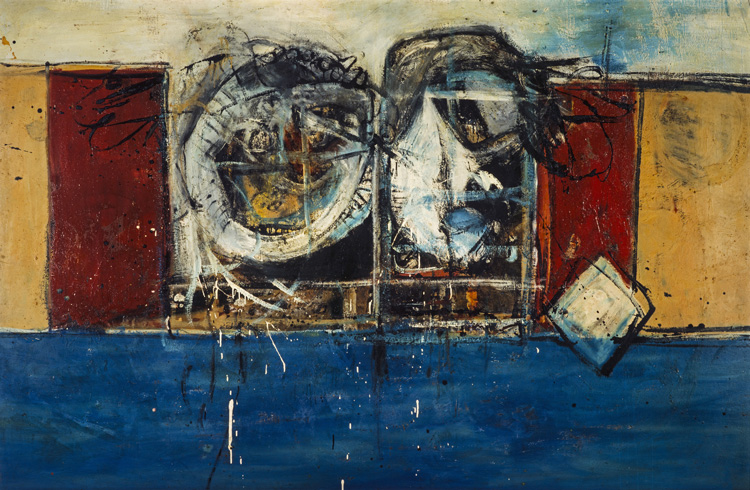 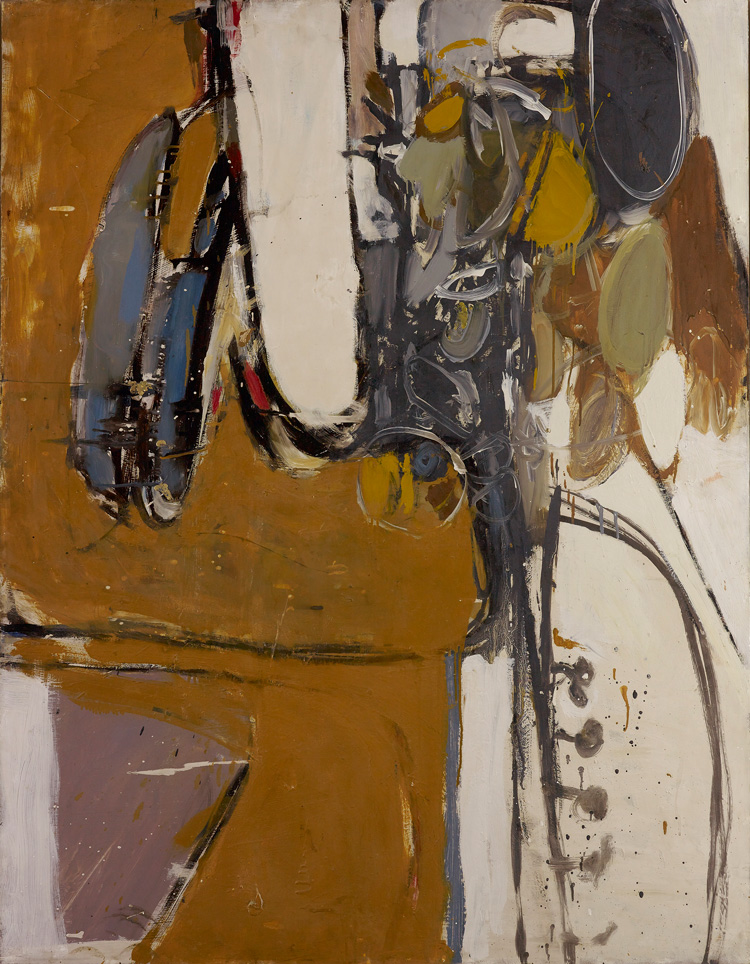 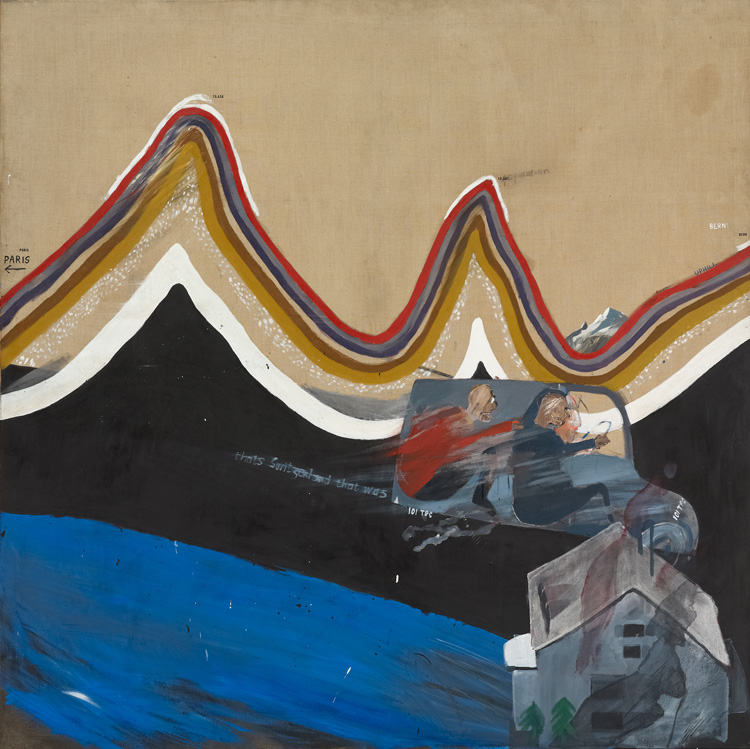 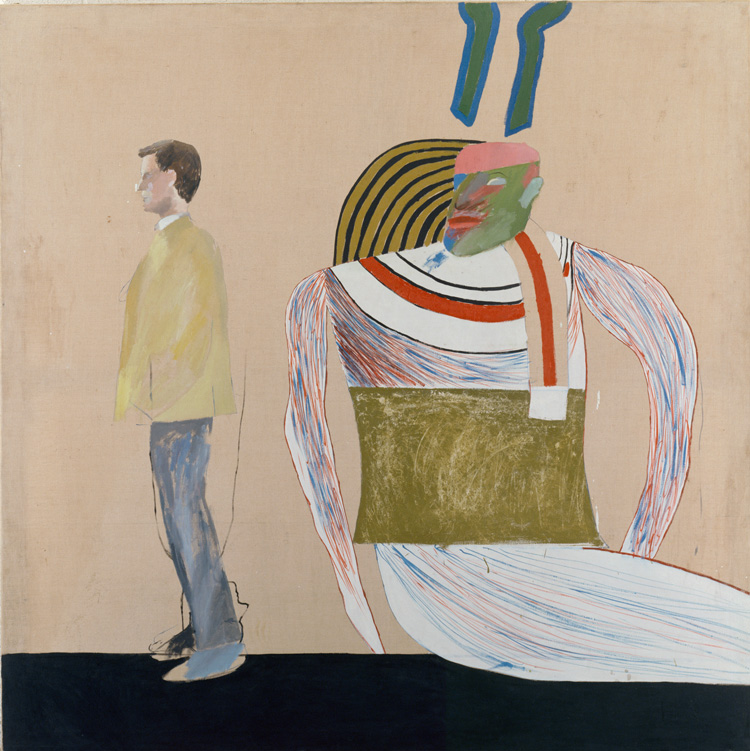 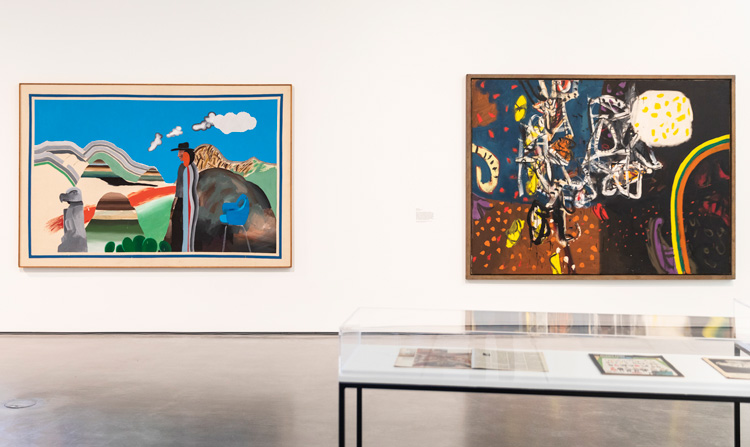 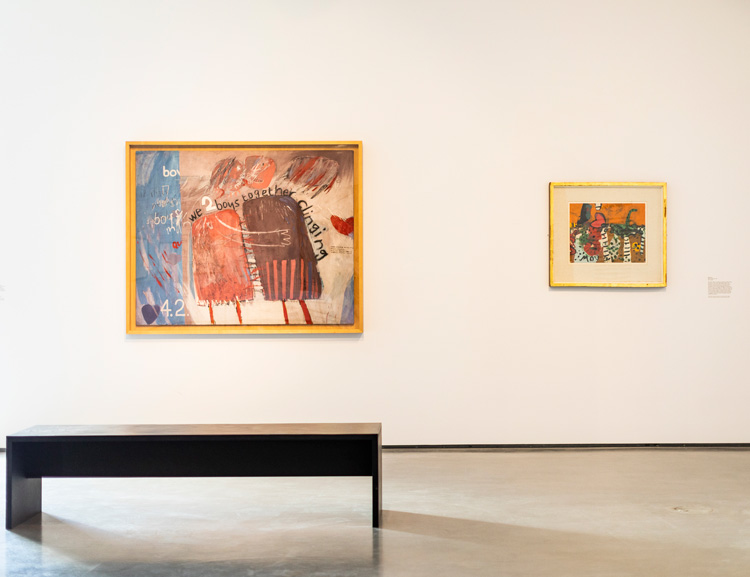