At a time when the UK’s relationship with the rest of Europe is at stake, this exhibition of the artistic dialogue between Scotland and the continent is illuminating and inspiring 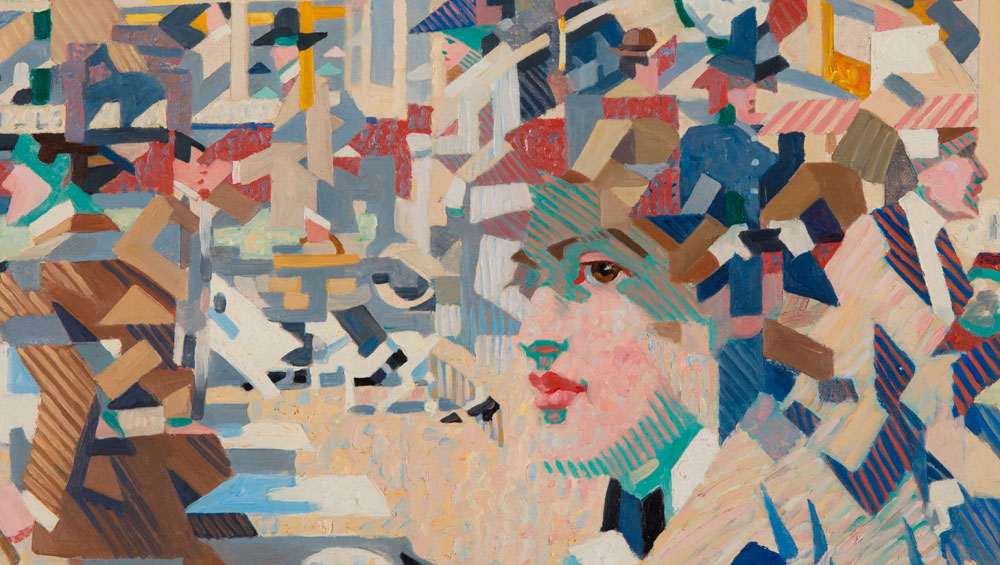 When I visit A New Era: Scottish Modern Art, 1900-1950at the Scottish National Gallery of Modern Art in Edinburgh, it is a grey day, the drizzling fine rain almost invisible in the mist. The palette seems uninspiring – the green lawns outside are sodden and muddy, disappearing beneath the haze. As soon as I am inside, however, the joyful colours of the exhibition dispel all that; the Scottish painters of the first half of the last century, despite being from this northern, grey little country, chose to paint beyond their daily experience. This was not simply because their imaginations were wild and adventurous, but because their lives were, too. If anything united the artists whose work is shown, it was their determination to connect with the continent – to travel there and open themselves up to the inspiring work and lives of their fellow Europeans. They realised that they could not paint with their local palette alone; they needed a full array of colours to develop and express themselves freely.

As a result, the rooms of the exhibition possess an array of influences, figures and styles, through which Scottish artists responded to the birth of modernism in Europe. From surrealism to abstraction, and fauvism to cubism, the paintings, drawings and sculptures of more than 50 artists show the vast scope of this dialogue, and, crucially, the way in which this creative cross-pollination enriched Scottish culture for decades.

Beginning with the work of JD Fergusson (1874-1961), the Scottish colourist who moved to Paris in 1907 and rejected the conservative attitudes of the Scottish art establishment for the radicalism of modernism, A New Era tells the story not only of the influence of European art on Scottish painters, but also a wider shift towards an internationalist outlook. Fergusson learned from Pablo Picasso and Henri Matisse, whom he encountered in Paris during his six years there, and his paintings – including La Terrasse, Café d’Harcourt(1908) and At My Studio Window (1910) – are a joyful expression of this attitude and an act of rebellion.

Indeed, fellow Scottish colourist Samuel Peploe (1871-1935) also features in the exhibition. Having lived in Paris, for two formative years before the first world war, his paintings, too, were inspired by abstraction and cubism. Welcomed into Fergusson’s social group of expat artists (which included Anne Estelle Rice, Jo Davidson and Jessica Dismorr), he became part of a group dubbed “the Rhythmists”, after the art journal founded by Fergusson in 1911. As the artist, editor and man-about-town recalled later: “Peploe and I went everywhere together. I took him to see Picasso and he was very much impressed. We … met Bourdelle, Friesz, Pascin and others. He started to send to the Salon d’Automne. I was very happy, for I felt that at last he was in a suitable milieu, something more sympathetic than the RSA.”2

Peploe’s work certainly benefited from this friendship and immersion in a new, freer world. His painting Still Life (c1913), a highlight of the exhibition, possesses the spirit and skill of a man liberated from the tradition and conservatism of his home country, as well as the subtlety and confidence of one genuinely at one with his new (if temporary) home and friends.

The influence of Italian futurism is evident, meanwhile, in the work of Stanley Cursiter (1887-1976), who deconstructed movement and form in his paintings, including The Sensation of Crossing the Street – West End, Edinburgh (1913). After the brutality of the first world war, however, Cursiter was not alone in rejecting the “chaotic” avant-garde movements of previous years (including futurism), since they no longer captured the mood of the time, and, if anything, seemed to revel in a sense of anarchy that had become, to them all, something familiar and tragic rather than innovative.

Instead, expressionism and surrealism dominated the postwar period; these movements enabled an engagement with the sense of loss and trauma that had characterised the common experience, as well as the displacement and disorientation that followed in the years after. I found the work of Keith Henderson (1883-1982) particularly impressive, albeit rather understated compared with larger works.

Another interesting, and unexpected highlight of the exhibition is a display of Magazines and Manifestos: British Periodicals from 1890 to 1950,from the Keiller Library display, which showcases the “little magazines” (similar to today’s zines) that were produced by many literary and artistic groups during these decades. These journals are not only fascinating for their visual content, but also show how the evangelical artists of these movements made a concerted effort to communicate their innovative and often radical ideas to a wider audience, and to reach out to other artists, or new recruits.

As well as travelling to Europe and publishing artistic journals, the desire for a more internationalist outlook (as the exhibition catalogue by Alice Strang points out) was encouraged and satisfied through the enthusiastic holding of exhibitions in the 1930s of the work of Edvard Munch, Paul Klee and Picasso, meaning that even when Scottish artists were not able to travel abroad, the work of their European contemporaries could influence and inspire them.

In the final room, this sharing of ideas is most evident and satisfying. By the 1950s, as shown with Eduardo Paolozzi’s Table Sculpture and the artwork of William Turnbull (1922-2012) and Wilhelmina Barns-Graham (1912-2004), Scottish artists have become more than mere evangelicals for movements abroad, but proponents of them. Only a generation later, the avant-garde attitudes of Fergusson, Peploe and their European peers have become woven into Scottish culture and part of its heritage, rather than simply imported and experimented with. Paolozzi, in particular (although, sadly, only one work is shown here), personified this fusion of European and Scottish influences, having escaped Italian fascism to make a new life in Scotland, and managing to entwine his own heritage and memory with a new life in this country.

This creative and innovative attitude to the arts is especially moving, and a reminder of the ties and histories that bind European countries and their people. Leaving the gallery and going back out of into the soft Edinburgh rain, it was hard not to miss those other colours in the palette – the other people and perspectives that have for so long enriched our own culture and society at large, and without which our world seems, particularly on a grey winter day, sorely lacking.