A little Madness in the spring. Emily Dickinson's Garden: The Poetry of Flowers

A little Madness in the spring

In any season, a visit to the New York Botanical Garden (NYBG) provides ample glimpses of nature’s bounty; NYBG’s offerings are showcased in meticulously maintained grounds, elegant conservatory, professional-calibre research library and small but well-designed exhibition space. Located in the Bronx and easily accessible via subway and Metro-North Railroad, NYBG has opened an uncommonly beautiful show that makes a spring 2010 trip even more tempting. Emily Dickinson’s Garden: The Poetry of Flowers is an exquisite homage to a woman who has captivated admirers for more than 100 years. Organised by a curatorial team of Dickinson scholars, NYBG scientists and authors, the exhibit raises high expectations. Rest assured, Dickinson has been handled with kid gloves; every component of this ambitious project reflects a deep understanding of Dickinson and her poetry. Chief among NYBG’s accomplishments is demonstrating the ways in which Dickinson's passions – people, flowers, books and words – intersect and merge in her poems.

Better known as a gardener than a poet in her day, Dickinson (1830–1886) took the act of cultivation as her modus operandi. As a metaphor for tending not only her beloved flowers but her family, few friends and intimate feelings, "cultivating" rings true and resounds throughout the show. The premise that Dickinson the woman can only be thoroughly grasped by discerning links between her art and her garden is persuasive. Secreted away by the poet while she lived, most of her poems were published after she died. But Dickinson is known to have been an avid correspondent, filling her notes with botanical references, lyrical descriptions of flowers she grew, and fresh and pressed examples of them. The slant (“off”) rhyme popular in the 19th century was perfect for her startling revelations through floral imagery. Childlike inconsistency with capitalisation and punctuation make her poems seem refreshingly innocent, yet her sophisticated apprehension of minute details yields sweet surprises. Preoccupied by the inescapable reality of death, Dickinson found inspiration and solace in nature’s regenerative qualities. Press materials, a gratis Big Read Reader’s Guide produced by the National Endowment for the Arts (www.NEABigRead.org) and a 30-page, full-colour paperback catalogue echo a comment Dickinson made citing herself as a “lunatic on bulbs”. No doubt, the botanical variety chosen for the show will provoke a similar sensation in garden enthusiasts. Nevertheless, those more accustomed to enjoying nature as audience will feel the buoyancy sparked by the first post-winter blooms. In typical Dickinson fashion, the poet captured this feeling in A little Madness in the Spring:

A little Madness in the Spring
Is wholesome even for the King,
But God be with the Clown –
Who ponders this tremendous scene –
This whole Experiment of Green –
As if it were his own! 1

At every turn, NYBG curators reinforce ties between gardener and poet, from a recreation of Dickinson’s garden in Amherst, Massachusetts, in the Enid A. Haupt Conservatory, to an Emily Dickinson Poetry Walk marked by more than 30 poetry boards and audio messages (available via cell phone), to a display of 60 objects (books, manuscripts, watercolours, photographs, a copy of her iconic white dress, a digital display of her herbarium) in the LuEsther T. Mertz Library gallery. During opening weekend, 30 April–2 May, children and adults participated in public readings of all Dickinson poems, numbering close to 1,800. A marathon themed reading, “Death, Bees and Roses”, will close the show on 12 and 13 June. A poetry series premiered on 11 May with US Poet Laureate Billy Collins and Brenda Wineapple (White Heat: The Friendship of Emily Dickinson and Thomas Wentworth Higginson); scheduled presenters include novelist Jerome Charyn (The Secret Life of Emily Dickinson).2 As many visitors will be quite smitten by an array of flowers most probably grown by Dickinson given the New England climate and her ability to force bulbs in her conservatory, they should not be surprised if, inadvertently, even the most poetry-shy turn tail. At least, that is the hope of the Poetry Society of America, the National Endowment for the Arts and the Emily Dickinson Museum in Amherst, partners with NYBG in the exhibit.

Emily Dickinson’s Garden follows an earlier NYBG show examining Charles Darwin (1809–1882) as gardener and his garden as crucible for groundbreaking evolutionary theories. Held on the eve of Darwin’s 200th birthday and 150th anniversary of his On the Origins of the Species (1859), the spring 2008 Darwin’s Garden: An Evolutionary Adventure consisted of a 33-stop tour through parts of the NYBG’s 250 acres. In the Haupt Conservatory, a replica of Darwin’s country home outside London, Down House, mimicked Darwin’s garden view through his own window. At Down House, Darwin had a Sandwalk, or “thinking path”, where he pondered his ideas among flowers, vegetables and greenhouse. For the Dickinson show, NYBG replicated Dickinson’s bedroom and facades of the humbler Homestead, where she was born and died, and her brother and sister-in-law’s comparatively elaborate Italianate-style Evergreens. Through these architectural devices, visitors are invited to imaginatively enter the poet’s 19th-century New England, a physically small but emotionally intense universe. While cataclysmic events occurred in America and abroad, Dickinson created a botanical theatre dramatising her inner world.

A major contributor to the curatorial team, Dickinson scholar/biographer Judith Farr (The Passion of Emily Dickinson) has written with horticulturist Louise Carter the first book-length study of Dickinson as gardener/poet. More than a third of Dickinson’s poems and nearly half of her letters mention flowers in the Victorian-age language of flowers, as metaphors for her feelings, and as emblems of her devotion. Farr’s The Gardens of Emily Dickinson (Harvard University Press, 2004) is available in the NYBG gift shop. Recommended to serious scholars and gardening historians is the Belknap Press’s 208-page facsimile edition of Dickinson’s 400-specimen herbarium, begun when she was 14-years-old.3 The herbarium became the foundation and reflection of her life-long love affair with roses, hyacinths, tulips, daffodils, peonies, daisies and dandelions, among many other varieties of wildflowers and exotics. People of all ages and from all walks of life have been drawn to Dickinson’s poetry and, fortunately, there are many other options to please such diverse tastes, from two novels (Farr’s I Never Came to You in White and Charyn’s The Secret Life of Emily Dickinson); two delightful children’s books (The Mouse of Amherst by Elizabeth Spires, illustrated by Claire A. Nivola, and Emily by Michael Bedard, illustrated by Barbara Cooney), and William Luce’s 1976 one-act play starring Julie Harris, The Belle of Amherst, filmed for public television and now available on DVD.4 Due for June 2010 release in the States is Lives like Loaded Guns: Dickinson and Her Family’s Feuds by Lyndall Gordon (T.S. Eliot: An Imperfect Life; Virginia Woolf: A Writer’s Life). Published in the UK in February 2010 by Virago, Gordon’s biography busts much Dickinson mythology.5

Emily Dickinson’s Garden also defies Dickinson mythology by, first, recognising the shy, reclusive, oblique woman on the surface. Then, through metaphors of garden and cultivation, the exhibit points visitors to the source of Dickinson’s fiery soul. Rather than ultimately unknowable, the woman honoured by NYBG is a wise, witty, fearless adventurer in the natural world. By tending her great love for family and friends, human and botanical, she watered her inner garden. The poems that bloomed there prove that Dickinson not only dwelt in possibility, but achieved the impossible.6 Alive to nature, she abandoned herself to a little madness. In so doing, she unlocked nature’s mysteries for those of us who just might miss its sweet surprises. 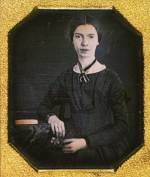 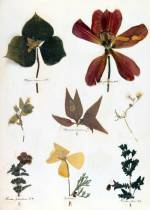