A Handful of Dust: Photography after Man Ray and Marcel Duchamp

A Handful of Dust: Photography after Man Ray and Marcel Duchamp 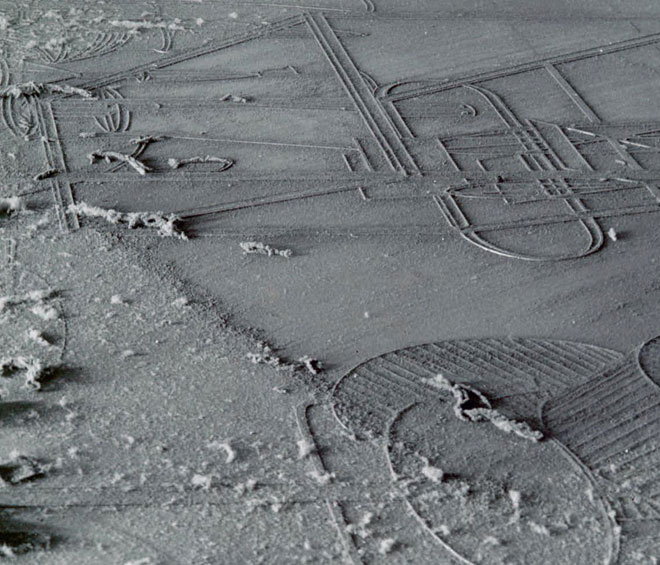 The biblical dictum “ashes to ashes, dust to dust” challenges the supposition that dust is dead. It implies that while, in the end, all life turns to dust, it is also true that all life comes from dust, such that, weirdly, dust can be said to exist in both dead and living states. In that vein, the Whitechapel Gallery’s exhibition, A Handful of Dust, takes as its point of departure Man Ray’s Dust Breeding – the first work the viewer finds in the introductory room. The photograph was born out of a visit Man Ray made to Marcel Duchamp’s Manhattan studio in 1920. On the surface of a pane of glass – a work later known as The Bride Stripped Bare by Her Bachelors, Even (The Large Glass) (1915-23) – Man Ray came across a curious accumulation of dust, which he then photographed. When it was reproduced two years later in the surrealist magazine Littérature, as visitors find in the display copy, the image was factitiously described as a “view from an aeroplane”. Perhaps the puffy clusters of dust could be clouds and the peculiar geometric indentations could be rows of crops seen from the sky. What scene the photograph really depicts is unimportant; what is significant is the caption, which paradoxically declares, “how arid it is / how fertile it is”1 – the assertion being that lifeless fluff and fertile farmland are mysteriously somehow both dead and alive.

On one count, this absurd, morbid mortification of all that is living might be read within the context of the two world wars – a desperate, hysterical reaction to mass slaughter. Indeed, the exhibition takes its title from a line in TS Eliot’s The Waste Land (1922), a poem about hopelessness in the aftermath of the first world war. The narrator questions: “What are the roots that clutch, what branches grow / Out of this stony rubbish?” Superficially, dust serves as a cliched symbol of destruction and human mortality, but the line “I will show you fear in a handful of dust” represents the far more remarkable and haunting suggestion that dust itself serves as a frightful agent of death. Although, ordinarily, dust is perceived as entirely innocuous, this exhibition uncovers a history (beyond the first half of the 20th century) of the most horrific killings inflicted on humanity.

Tens of thousands were instantly annihilated when the atomic bombs hit Hiroshima and Nagasaki in 1945, but many survivors suffered radiation poisoning and a drawn-out death from the sticky, black, ash-laden rain that fell after the blast. In the exhibition, a screen displaying the opening scene of Alain Resnais’ 1959 movie Hiroshima Mon Amour recalls that horror. Dust showers two lovers naked in bed, suffocating their sweaty writhing bodies in a thick blanket of ash – an ecstatic, toxic death.

It is not simply that dust violently destroys the body; it is also that it might be seen to replace the body. In the main gallery, visitors come across a ghostly photograph from 1873 taken by Giorgio Sommer. The viewer finds a body, like Resnais’ lovers, caked in what appears to be dust. The image depicts a plaster cast of a body, which was encased by the burning airborne ash ejected from Mount Vesuvius when the volcano erupted in 1872. The victim lies in the foetal position – a pitiful attempt to shield himself from the scorching pyroclastic blast. The immediacy of this reaction makes the victim seem strangely alive; it is as if it might be possible to hear screaming (were it not muffled by a shell of ash). A similar effect is produced by Jeff Mermelstein’s photograph, which depicts New York immediately following the 9/11 terrorist attacks in 2001. The trees in the background are covered in grey ash and debris fills the floor. In the middle ground, there is a man, also enveloped in ash, sitting on a bench with an opened briefcase, perhaps about to take out a sandwich. He seems oddly undisturbed by the devastation around him. Although the photograph’s caption explains the figure is a statue, it appears as if the man had been petrified. As with the victim of Vesuvius, dust subsumes this body. Like maggots, dust infiltrates the body, consuming it, leaving nothing but the shell of life. It is an alien presence that makes the body absent from itself, and in its place resides the agent of its own death: dust.

This alludes to a more significant point: dust itself manages to be simultaneously present and absent. Indeed, fluff can float weightlessly in the air and will move out of reach if you try to catch it. In that case, it might be argued, dust is merely intangible but still visible, still present; but the Whitechapel’s exhibition succeeds in making dust completely invisible, non-material. As the visitor enters the main gallery, a whirring noise circles around the room, becoming increasingly louder and high-pitched, until it reaches a deafening crescendo, then falls silent. The silence lasts a minute or so, then the sounds start again. Shock and discomfort are followed by expectation and suspense, strange presence then eerie absence.

When visitors reach the end of the room, they at last find the source of the racket: Kirk Palmer’s Murmur (2006), an audio and video installation. The film depicts a forest outside Kyoto, a Japanese city that was shortlisted, but ultimately rejected, as target for an atomic bomb in 1945. (The viewer is led to believe that the screeching is an – albeit digitally heightened – audio recording of the wind vigorously blowing dirt against the trees.) Not only does the soundtrack play with dust and absence on a structural level, but it also manifests dust as sound, a non-physical phenomenon – present but not as we know it. As in the audio, so in the video, dust seems to exist as an eerie apparition – felt but not seen. Palmer’s camera rapidly cuts between widely disparate parts of the wood, like some fearsome, omnipresent, omnipotent overlord. It is as if this numinous being plays the role of fate, hanging over Kyoto, about to inflict the devastation that the city fortuitously escaped in 1945, like a grim reaper come for its due.

In the introductory wall text, David Campany, the curator of A Handful of Dust, poses a singular question: “Can a history be assembled from the perspective of dust?” Not only does the exhibition succeed in mounting a history of dust-inflicted murder, which is as compelling as it is harrowing, but – at the risk of anthropomorphising – it also enables the visitor to see and feel from dust’s “perspective”. What at first, outward glance appears mundane, lifeless and innocuous is elevated to the aura of an awesome god of death.