A Good Frame is Worth a Thousand Pictures

Canadian experimental film-maker and former jazz musician Michael Snow (Wavelength, Corpus Callosum) has just turned 84, but his multidisciplinary explorations into the nature of perception remain energised and engaging, his inquiries into the limits of representation precise and discerning. In addition to film and music, Snow has been a prolific painter, sculptor and writer. Michael Snow: Photo-Centric presents photographs taken between 1962 and 2003, in which the artist breaches the border between 2D and 3D and uses framing techniques to transform the medium into art. 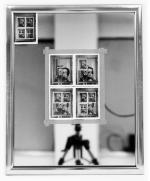