Michael Snow’s Times (1979) is a simple exercise in reproduction: a large photograph of one of the artist’s paintings hanging on a white gallery wall, with the blue from the canvas evenly balanced with the yellow wood floorboards.

The print is large, 196 x 188 cm (77 x 74in), creating the sense that it is a life-size reproduction of the original scene. But there is a problem with the label, neatly positioned to the right of the painting, a detail easily missed in the monumental photograph, but one that holds the key to the ruse; the text is blurry. It is here that the work unravels; the floorboards no longer seem so ordinary, they look disproportionally large and oddly distorted. This is not just a print of a painting on display in a gallery; it is photograph about photography, an investigation of scale using one of the most basic functions of the medium’s technological dexterity: the ability to enlarge (or shrink) an image.

Conceived in close collaboration with the artist, the exhibition Michael Snow: Photo-Centric offers a focused survey of Snow’s photography-based work produced between 1962 and 2003, through roughly 30 carefully selected pieces, grouped by themes and beautifully displayed in the Honickman and Berman galleries at the Philadelphia Museum of Art. As someone who works across a wide range of medium, including painting, sculpture, installation and jazz music, Snow’s use of photography stems from an interest in the medium’s transformative qualities, asking the straightforward question of how a 3D subject is translated into a 2D image in the resulting print. Works such as Press (1969) take this transformation literally. Here, Snow photographed 16 objects, including an egg and a pair of dead fish, that he had previously flattened using a metal plate, a Plexiglas rectangle, and four C-clamps. The resulting prints are mounted using a thick layer of polyester resin in a four-by-four grid and covered by a sheet of clear Plexiglas secured to the backing by a number of clamps. There is playfulness in Snow’s gesture, which supposedly “mimics” the process carried out by the camera, distilling the physical depth of real space and material to the planar, printed surface of a photographic print.

The ubiquity of photography within our daily lives leads to the expectation that we inherently understand how it works as a medium, that as well-conditioned, snap-happy voyeurs we know what it takes to get from the click to the print. But so much of Snow’s work relies on now outdated technology and it is important to consider these older methods of transformation when looking at Snow’s photography-based work. For Authorization (1969), Snow first outlined a small rectangle on a mirror to the exact size of two rows of Polaroid photographs. He then proceeded to take a photograph of his reflection with a Polaroid camera, and attached the instantly reproduced image to one corner of the rectangle, before taking another self-portrait, this time with his face partially obscured by the previous Polaroid. Snow repeated the process of taking a picture and then affixing the print within his rectangle twice more, and then captured a final image of his reflection, almost completely obscured by the previous four Polaroids and attached this print to the upper left corner of the mirror. In the gallery, the five Polaroids are displayed on a mirror as Snow had placed them, allowing the viewer to partially witness the process Snow went through to document the slow obliteration of his self-portrait through a sequence of images. In short, Authorization is a record of its own creation.

Snow’s interest in process, in the intrinsic qualities of photography, has distinct Modernist echoes. In the exhibition catalogue, Adelina Vlas, curator of the show, attaches this Modernist legacy to a shared endeavour to demystify the photographic process.1 Much of Snow’s work does this in a matter-of-fact manner, neatly revealing the underlying concept behind the image and the operation used to create it. For many Modernists, the camera was an astonishing tool, one that could mechanically extend vision and change one’s relationship with the physical world. This distinct fascination with seeing with the camera-eye is evident in Alexander Rodchenko’s vertiginous angles in his portraits of a young Soviet girl and his shots of sleek Modernist buildings. This legacy is present in Snow’s work Crouch, Leap, Land (1970), which consists of three photographs taken from below through a transparent surface, showing a naked woman performing the three actions in the title. The prints are affixed to the underside of three panels floating horizontally over the floor at about waist height, suspended by long wires from the ceiling. The work is easily missed, the topsides of the panels are painted black and the piece is camouflaged, as a whole, by the minimal aesthetic of its installation. In order to see the three photographs, the viewer must assume a position similar to that adopted by the photographer when taking the photographs, squatting close to the floor, looking up. In this way, Snow ties his artistic process back into his piece, using the shared experience of space and point-of-view to bring the viewer back to the origin, to the moment when he actually took the photograph; it is a clever realisation of “embodied visual perception”. The installation concept also reveals the artist’s sensibility as a sculptor, as someone who works with scale in its tangible form. It neatly ties together the mediums of photography and sculpture through their shared ability to inform the way we understand space; it shows acuity as to how we construct the world.

Light is integral to photography and it is another aspect that Snow explores in several works. In Light Blues (1974), a series of images of a photographer’s lamp, captured emitting different coloured light, is installed with the same lamp shinning a diffused blue glow on to it. Again the making of the work and its presentation are mirrored. In Midnight Blue (1973-74), light appears as the subject in a more comical vein. In this multimedia work, Snow uses wood, pencil, paint, wax and a photograph to create a trompe l’oeil composition in which a lit candle appears to stand on a wood ledge in front of a black background. In reality, the candle is actually a photograph and its physical presence is referenced only through its absence by the melted wax that lies in a puddle on the ledge.

Snow says that his art is of the studio, not of daily life, and it is an important distinction. His work is divorced from the social and political concerns tied to so much photography and the endless debate about the boundaries between art and documentary. Snow’s photography-based work is less about what we see in the final print, and more about how it got there. 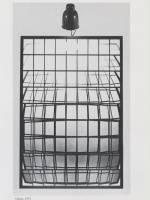 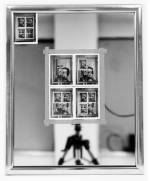 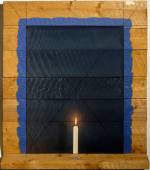 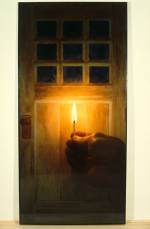