Two solo exhibitions featuring alumni from India’s premier art institute in Baroda throw up interesting questions about violence, self and the processes of survival

A man stands with a back-to-front aeroplane between his legs. His face is quizzical, while his body is twisted. He is balanced on a broken public pay phone and appears to be viewing the claustrophobic cityscape, complete with urban clutter and animal carcasses, through a periscope that rises out of a severed chameleon. There are a number of metaphors in play in the strange, and often gruesome, world presented on artist Zakkir Hussain’s canvases. Forty-five-year-old Hussain, whose work is inspired by found media images, is showing a new body of his recent works, titled Translating the Silence, at the Vadehra Gallery.

Decoded, these metaphors and symbols serve to accentuate the artist’s empathetic position in relation to the vulnerability of the human species that appears at the epicentre of dystopia, one that is often of mankind’s own creation. In the work described above, Man Balancing on a Broken Public Telephone, the protagonist’s manhood, indicated by the Freudian symbolism of the aeroplane, appears under some kind of threat, uncomfortably wedged between the subject’s legs. His body is placed on the defunct public telephone where all communication has been privatised by capitalist society. The chameleon appears as a metaphor for the deceptive quality of society. Several other canvases repeat the appearance of violent imagery – torsos, headless bodies and other mayhem wreaked on dissenting humans by an inclement and militaristic society.

The large body of works, which include paintings and drawings, are largely rendered in mixed media, Conté and watercolour on paper, along with a series of serigraphs. Colours in their most diverse forms show up within the artworks, but, strangely, are never emphasised to an extent that would distract the viewer from contemplating the primary motive behind the expression. Hussain, who was born in 1970, completed a master’s in graphics at the Faculty of Fine Arts at Maharaja Sayajirao University of Baroda (MSU) and his time there has helped him to hone his skills as a painter and printmaker: he is one of the few artists in India to work in pastels on a large scale.

While Hussain’s leftist ideology clearly leads him to empathise with his tortured protagonists, the endless sea of headless bodies and the overload of violent imagery can serve to numb the senses after a while. While creating hyper-macho images, one must often be aware of looking too much like what one is attempting to critique, and Hussain’s work, unfortunately, falls prey to that trap.

In the gallery below, we encounter a very different kind of solo show, one that speaks sotto voce. Artist Rakhi Peswani’s recent works, In Continuum, unavoidably appear in direct contrast to Hussain’s, and while that may not have been the intention of the gallery’s in-house curating team, Peswani does provide an interesting foil to Hussain’s undeviating, often verbose, imagery.

Peswani’s work, which employs the lexicon of the craft of stitching, treats the body as a garment, where thread becomes a metaphor for what binds us to this world and the implements of creating these sewn garments may often play the role of violent contender or supportive friend.

The Bangalore-based artist is inward looking and serene in most of her work, but under that veneer of serenity simmers a host of torrid emotions. Large mattresses that lie on the floor of the gallery are embroidered with bold images of the protagonist reaching within herself while trying, as the accompanying text suggests, to locate her inner core. Smaller works depict the human eye juxtaposed with various sewing implements, such as a needle, a stitching hoop or pincers, or in some instances bright-embroidered mirror-work that is native to Gujarat and Rajasthan.

These are subtle metaphors referencing restriction and confinement, but also catharsis and exorcism. Peswani, who was born in 1977 and, like Hussain, studied at MSU, created these works over a four-year period, from 2011 to 2015, and they display a variety of techniques, from graphic and linear work to voluminous installations that comprise bales of cloth and a sound piece.

There is also a set of light boxes, perhaps the best series in the exhibition, since their subtle evocations are deeply aesthetic without loosing their edge and incisiveness. For instance, a school of blades, scissors and safety-pins swimming on a blood-red a sea of fabric and cotton appear engaged in a dialogue of opposites – where one object may rip apart, the other appears to mend. Beside the emotive connotations of the work, which are open to interpretation, Peswani is interested in exploring the acquisition of human skills, technique, language and learning, and their diminishing importance in a mechanistic world.

In essence, the two exhibitions, when seen in conjunction, throw up interesting questions about identity and gender. While Hussain’s large-scale paintings have an inherent masculine quality, where he views the effect of the violence of the outside world on the human body, Peswani’s feminine approach uses craft and embroidery to contemplate the struggles of the inner-self to find balance and peace. Removed from their gendered readings, the works still stand on their own and engage the viewer in a long conversation with the self. 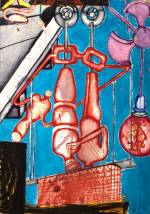 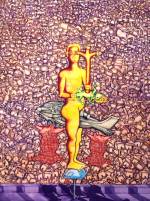 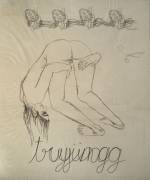 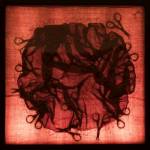