The British Museum has taken the opportunity of the current celebration of 60 years of Indian independence to offer the public, at a peak period of visitor attendance from overseas, the opportunity to view items from a remarkable collection (much of it recently acquired) of Indian art, extending to some fifty works in all dating from the late 17th century to the beginnings of the twentieth century.

India is already very much to the forefront of media focus today, it must be said, and a broad and deep academic revisionism of Indian history is rife. There has been much new research, by both Indian and European scholars and curators. On the rather superficial level here but tellingly, the nostalgic flickering of ancient home movies on television from the survivors of the last days has inevitably revealed the less than salubrious but fading graces of those members of the British Indian civil service who resorted in high season to such hill stations as Mussorie; and the parallel compliant decadence of the maharajahs. In many ways, inevitably as with so much else (for example the atlantic slave trade), the former imperial power, like other empires since Rome, has been in massive denial of history. Typically, the gift of a superb (and still well-functioning) sub-continental railway system is trotted forward as a panacea. However the development of a viable democratic constitution has been as much the product of Indian civility as British groundwork before independence.

The current series of events staged in London, entitled 'India Now', of which this exhibition forms an important part, are this summer well orchestrated from the Mayor's office of the Greater London Authority, with events and exhibitions across London devoted to Indian art, film, food, drama, music, and even fashion, all symptomatic of the rising Tiger of the new India. Part of the purpose of the programme, altruistically, is to emphasise India's particular contribution to global culture today, involving some 150 cultural organisations from India itself.

The core of the British Museum exhibition is a group of paintings from South India, actually acquired as recently as April. These go to bolster the other collections of Indian work in the British Museum. The superb Enlightenment exhibition, mounted here at the British Museum in 2003, revealed that there were clear gaps in the Indian collections made during and after the Enlightenment period. It remains now for us today to be reminded of a few key British individualists, employees of or connected with the 18th and 19th century East India Company, who were often dismissed by their more conventional colleagues as cranks, who studied, collected and conserved particular fields of Hindu art. In fact they analysed, collated, and ordered with full Enlightenment purpose what to European eyes seemed otherwise chaotic at the time.

The key period here is that between 1720 and 1820. It could be defined as a honeymoon period between the East India Company members there and Hindu culture. Edward Moor was a major presence; first coming to India at a very young age, he rapidly became fluent in a number of Indian languages. In 1810 he published 'The Hindu Pantheon', as a young Enlightenment prodigy, bringing together Hindu text and imagery, and seeking almost single-handedly to categorise the Hindu religious symbolism behind it all. His scholarship was inevitably misguided and in some ways misdirected, but his work began to unravel the mysteries of Hindu mythology. He collected assiduously a wide range of Hindu work, including miniatures, and commissioned over 600 items. A key painting that Moor acquired is on show in the exhibition 'Shiva and Parvati Seated on a Terrace' (c.1800). The couple are seated in conjugal bliss, on a tiger skin, after sundown on what appears to be the eve of a monsoon. But the two deities relax together, reaching gently back into the freshening air, while each one touches the other discreetly but knowingly. But as we look closer in detail, we see that Shiva is a player of death (skulls of dead enemies hang ominously from his shoulders). The demeanour of the loving couple and the background scenario are in complete contrast, and the passing seasons become metaphors for human feeling. In other works such creatures as elephants and peacocks perform in contrasting but playful mood.

The core of the British Museum's collection of Hindu statues came from a different contemporary collector. Charles 'Hindoo' Stuart came in fact somewhat earlier than Moor to join the Company becoming one of their military general staff. He took a different approach to Hinduism, becoming a convert, and to the surprise of colleagues even followed their ritual way of life while still living in the East India Company community. The superb collection that he made derived from his deep understanding of Hinduism: now some of the sculptures he collected line the staircase to this exhibition. He is also remembered for commissioning and having built a complete Hindu temple, at Saugor there. His enthusiasm for Hindu culture knew no bounds.

Sadly, the evangelical efforts of William Wilberforce, so valuable in the abolition of the slave trade, were also directed at unleashing a surge of evangelical preachers from England at the Indian natives, notably the brahmins as well as at the 'sinful' members of the East India Company. This may not have much influenced the Indians, but it severed the harmonious cultural linkages that had been built up since the early 18th century through the enthusiasm of such as Moor and Stuart. The British community became alienated from their adopted country. A generation later came the Indian Mutiny of 1857. Arguably the roots of this conflict actually lay with the Evangelists. Today, the total victims on both sides are thought to number into millions, significantly more than 100,000 Indian troops who died in reprisals in the following decade. The Indian historian Amaresh Misra is currently unravelling with all the skill of a revisionist scholar the truth so long obscured, and indeed claims that this was no less than a first war of independence, leading in due course to the 1947 Independence of India.

Faith, Narrative and Desire shows us how, for a golden period, in the days of the East India Company, British connoisseurship and scholarship and Indian creativity and artistry collaborated to produce a rare seam of art, firmly fostered by Enlightenment ideals. 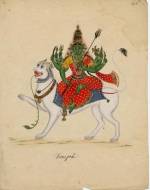 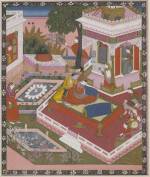 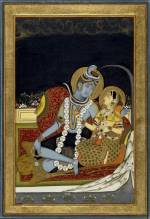