Tate Britain, London
1 June-28 August 2006 This fascinating exhibition brings together several of Constable's best-known pictures in the form of full-scale sketches - the so-called 'six-footers'. These are supported and informed by works on other scales, sketches and documentary material.

Born in 1776, Constable lived through one of the most turbulent periods in British history. He was 13 at the time of the outbreak of the French Revolution, 28 at the time of Trafalgar and 39 at Waterloo. For most of his life he saw Europe torn apart by war, hunger and political instability. His generation lived with the ever-present fear of an invasion which would draw Britain into the turmoil so evident in France, Spain, Italy and most of Europe.

Significantly, one would learn nothing of this from his paintings. Indeed, it is likely that the horror and turbulence of historical events abroad stimulated a love of the familiar and the dependable, for it was in Constable's lifetime, and partly due to his work, that the British first found an image of their homeland with which they felt fully comfortable and could learn to love.

Even looking at his pictures as, in part, documents of his time, they betray a point of view that was highly selective. We would never guess from the evidence of these pastoral scenes that the land they depicted was going through a profound period of social and political transformation. This transformation converted a predominantly rural society into one that was mainly urban, and in which the familiar social order crumbled to be replaced with something which was less certain.

Constable came from an affluent land-owning family, and his subjects repeatedly celebrate and underline the things that underpinned a conservative view of British society: property, land and the Church of England. His distress at the transformation of Brighton from an innocent fishing town into, as he saw it, a vulgar beach resort was, in part, a protest at the democratisation of the British landscape and the provision of access to many who, in former times, would have never so much as seen the sea. If he were alive today, Constable would probably have vigorously opposed the 'right to roam' legislation.

It is significant that such issues, which came into such sharp focus at the time of the bicentenary exhibition in 1976, seem to have dropped off the radar 30 years later. It is not that Constable's socio-political personality should change our appraisal of his paintings as works of art, but if we accept that works of art are, to some extent, also historical documents that have significance for what they omit as well as what they include, the transformation is at least of interest.

Viewing these painting as works of art, one has the problem of over-familiarity. Looking at a well-known Constable is rather like looking in the mirror in the morning: one is so familiar with what one sees that only the most significant changes arrest the attention. Seeing so many of the large sketches together impresses upon the viewer the distinctive character of their conception and realisation. The paint is freely and boldly handled. There are wide and abrupt juxtapositions of tone. There is everywhere a sense of movement and animation, amounting almost to agitation. The process of facture is not only evident, but energetically celebrated.

An aficionado of 19th-century painting who was presented with the last four sentences and asked to suggest a painter, would probably say Van Gogh. And quite rightly so, because it is in these respects that Constable was an avant-garde painter and anticipated much of what was to come in Realism, Impressionism and elsewhere. Perhaps the sense of restless agitation that we find in the large sketches is a manifestation of Expressionism avant la lettre.

If we consider Constable as a prototype Expressionist, one must ask what psychological and spiritual forces might have found their realisation in this agitated paintwork and spattered colour. One was no doubt his distress and deep despair at the protracted illness and ultimate death of his much-loved wife Maria, events that coincided with the hauntingly violent 'Hadleigh Castle' of 1828. However, returning to the theme of my opening remarks, is it possible that the expressionistic aspects of Constable's work betray a growing sense of unease that what he was recording, like Brighton Beach, would soon disappear beneath the progress of an ugly and irresistible modernism, in which horses would be replaced by belching steam engines, barges by steamers and Trollopian country curates by bible-thumping non-conformist evangelists?

This exhibition provides an opportunity to revisit many of the puzzles and paradoxes of Constable's work; and to discover some new ones. 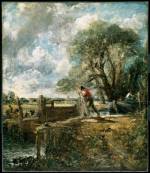 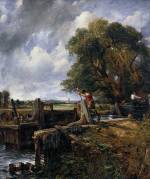