Covering the first decade of Rembrandt’s work, with more than 30 paintings and 90 drawings and prints, this unusual show traces the artist’s transformation from unaccomplished teenager to one of the world’s greatest artists

Ashmolean Museum, Oxford
27 February – 7 June 2020 (The Ashmolean Museum is closed from 17 March following government recommendations for the closure of large public venues as a means of ‘social distancing’ to minimise the risks of person-to-person transmission of the Coronavirus (Covid-19).)

Rembrandt was not a child prodigy. Born in 1606, the ninth of 10 children of a prosperous miller, Rembrandt Harmenszoon van Rijn, came to painting late by 17th-century standards.

Anthony Van Dyck, a contemporary, was a star by 16, and Jan Lievens, Rembrandt’s friend and competitor in his hometown of Leiden, was apprenticed at eight and an accomplished artist by the time he was  12. By contrast, the first works in this exhibition, produced when Rembrandt was 18, are nothing to write home about. Young Rembrandt’s co-curator An van Camp describes them as “quite clumsy”, yet just four years later we begin to see the Rembrandt we know, and within six years he is producing work of the quality that secured his dominant position in the history of art. 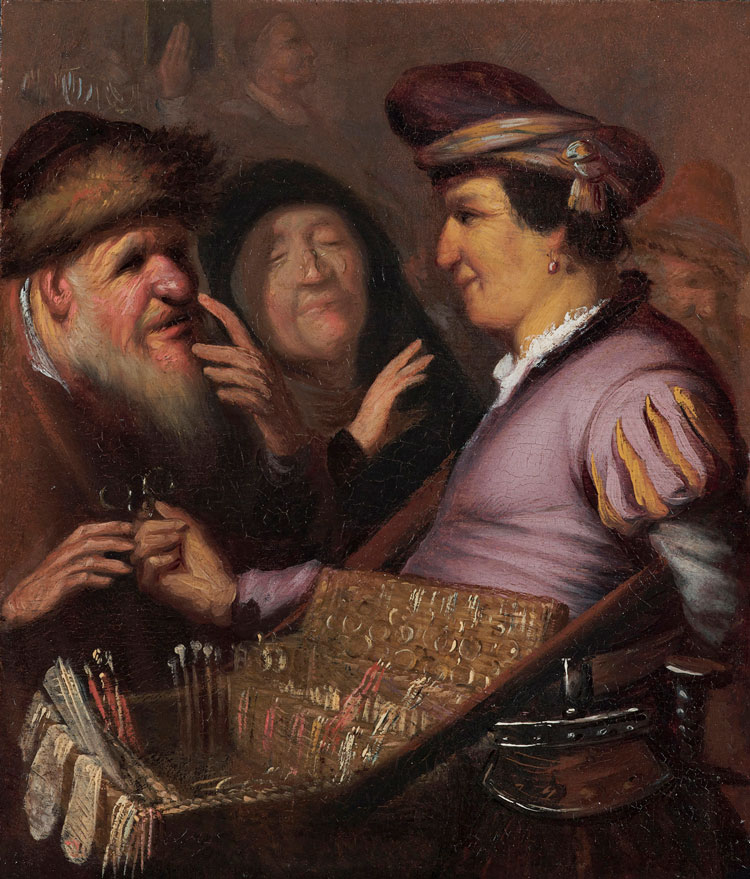 Rembrandt’s first-known paintings are a series of five small panels representing the senses, four of which survive. They are represented here by The Spectacles Seller (Allegory of Sight). Its execution is crude compared with his later work, the composition a bit off kilter, but we already see some of Rembrandt’s interests emerging.

The closeup three-person scene from daily life is an original way to approach an allegorical subject usually depicted through classical personification. The spectacles in the pedlar’s tray are seen more by the light that glints off them than by any detail of outline, and the bulbous-nosed buyer is full of character, his wrinkled face engaging the viewer in his story. These Rembrandtian aspects abide and develop across the decade covered by this show – and well beyond.

Rembrandt’s style shifts as he comes under the influence of his Amsterdam master, Pieter Lastman, with whom he spent a six-month apprenticeship in 1624-5, and whose Baptism of the Eunuch (1615-20) is here for comparison. The younger artist tries out Lastman’s pyramidal composition and bright palette. Dr Christopher Brown, co-curator and director-emeritus of the Ashmolean, says we see Rembrandt “absorbing then shedding” this and other influences, as he experiments and learns, working his way towards his own style. 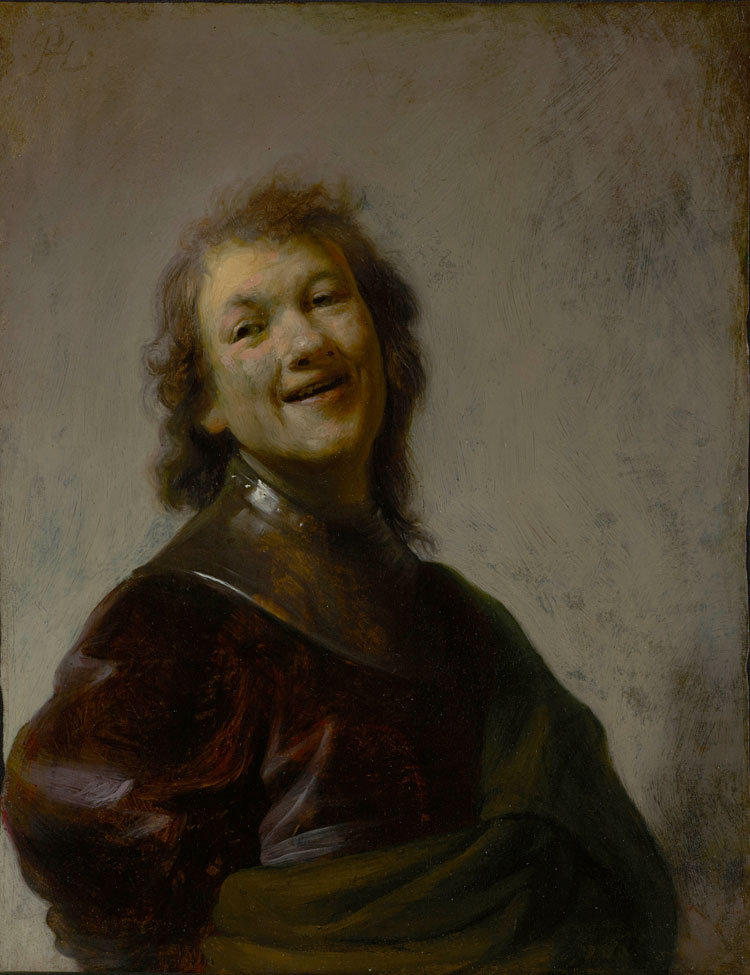 The process is not linear. Flashes of inspiration are interspersed with more pedestrian performances. But we can track the development of Rembrandt’s  interest in texture, chiaroscuro, lived-in faces, street people, and emotion – the embodiment of which he practises to great effect on his own visage.
The reproduction of these self-portrait “passions of the soul” were a printmaking first, according to Rembrandt biographer Jonathan Bikker of the Rijksmuseum, but the artist’s earliest attempts at etching are bluntly described by Van Camp as “botched”. His first known print, The Circumcision (1625), is indeed not the best, but he learned fast and was soon creating etchings of remarkable lucidity, his free-flowing line giving them unusual immediacy. He rarely used preparatory drawings, treating his wax-coated copper plates almost like paper. And when a plate failed, he chopped it up and used it again. 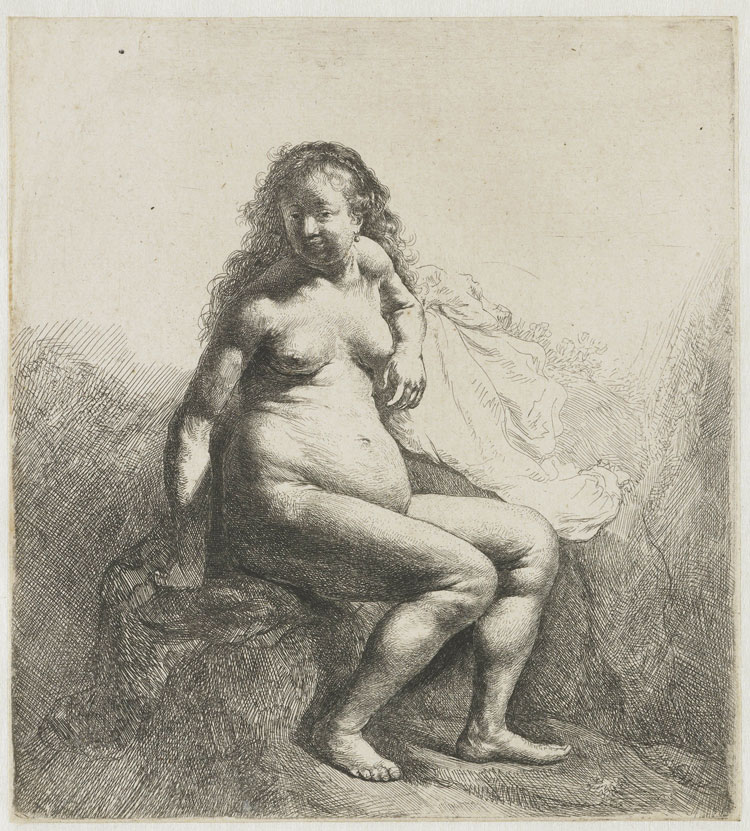 By 1630, Rembrandt was producing his characteristic etchings of beggars and street folk, some of them a little controversial. The Rijksmuseum’s Nude Woman Seated on a Mound (c1631) sits with saggy belly, legs ringed with garter marks, looking straight at us with a direct unashamed gaze. The British Museum’s A Woman Defecating (1631) takes the intimacy a step further, but not too far, apparently, for Rembrandt’s Dutch public. Many impressions were made of the image, so it presumably sold well.

In 1625, Rembrandt set up his own studio at home in Leiden, the Dutch Republic’s second city and a boomtown, but an artistic backwater compared with Amsterdam. Paintings from this period include the bizarre, Lastman-influenced History Painting (1626), so called because, despite the best efforts of serious scholars, nobody can work out what it is about. One element at least is clear: the face that stares out at us from behind the main character is Rembrandt. Less certain is the show’s claim that a feather-hatted figure in the shadows is Lievens.

This was, however, certainly the period when Rembrandt and Lievens were close friends and artistic competitors, a rivalry that may have been a crucial motivator. The exhibition offers us an interesting comparison in three similarly composed paintings of Samson and Delilah – one each by Lievens and Rembrandt and one attributed to the latter. Each depicts a rarely painted dramatic moment in the story (the choice of which may owe something to a Rubens print): Samson sleeps in the lap of his treacherous lover as she turns to ask a newly arrived Philistine to rob the strongman of his power by cutting off his hair. 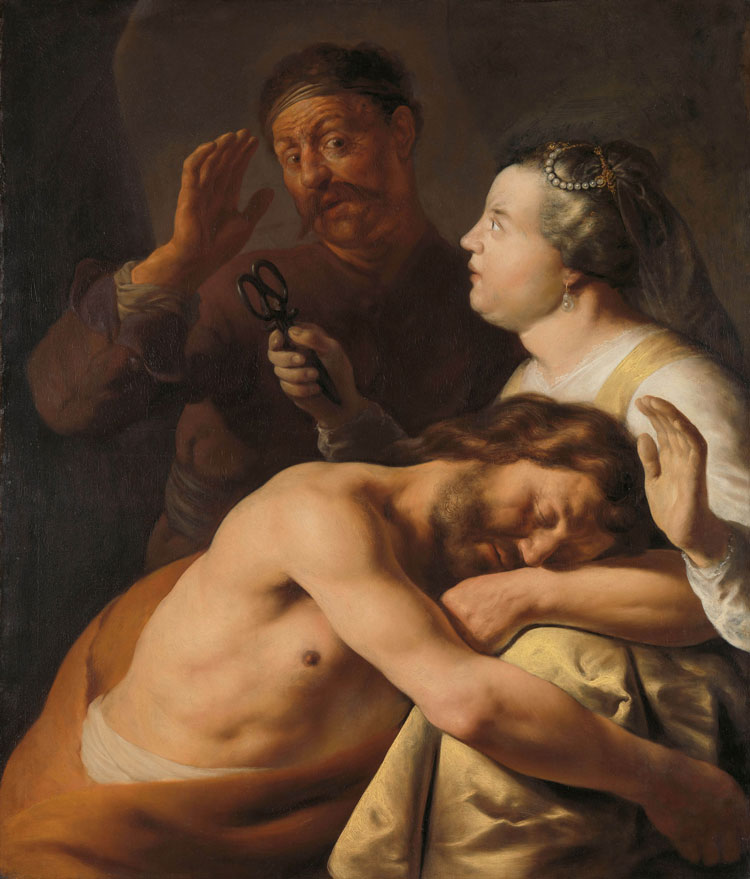 The earliest of the three pictures is probably the one by Lievens (c1625-6), a typically large and accomplished work with a highly credible Delilah and a slightly more model-book Philistine. The second image, “Attributed to Rembrandt” (c1626-7), has a closely related Delilah, but the Philistine has gone full cartoon – a representation of shock and surprise rather than a real person. 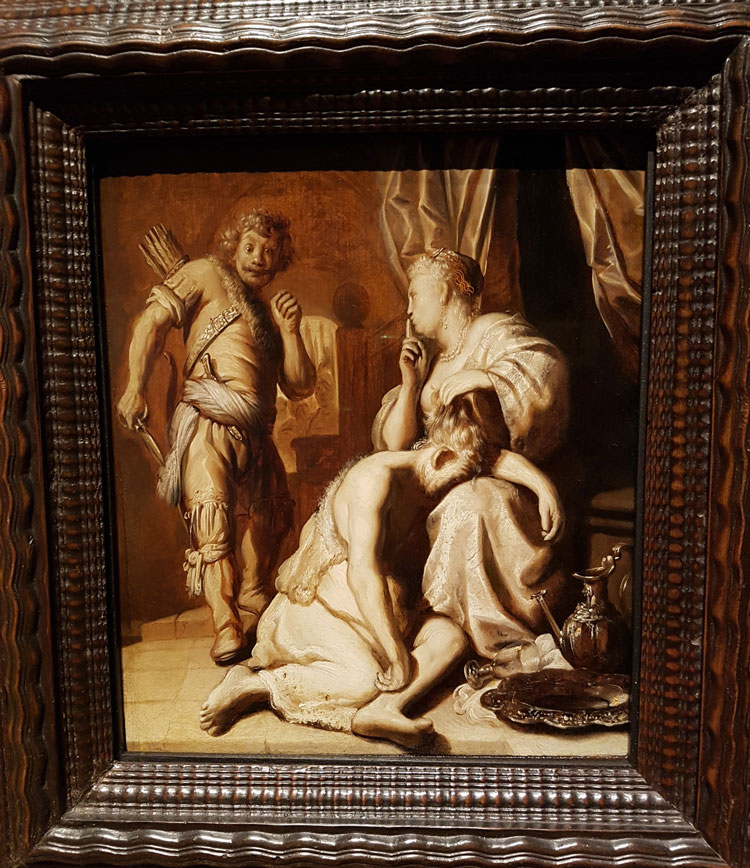 Finally, in 1628, we see Rembrandt begin to overtake his contemporary, producing a small, entirely coherent caricature-free panel in which intense chiaroscuro highlights the key dramatic elements: Samson’s well-dressed back, his dagger and the all-important curls, Delilah’s hand, her face and the blade-wielding arm of the Philistine. 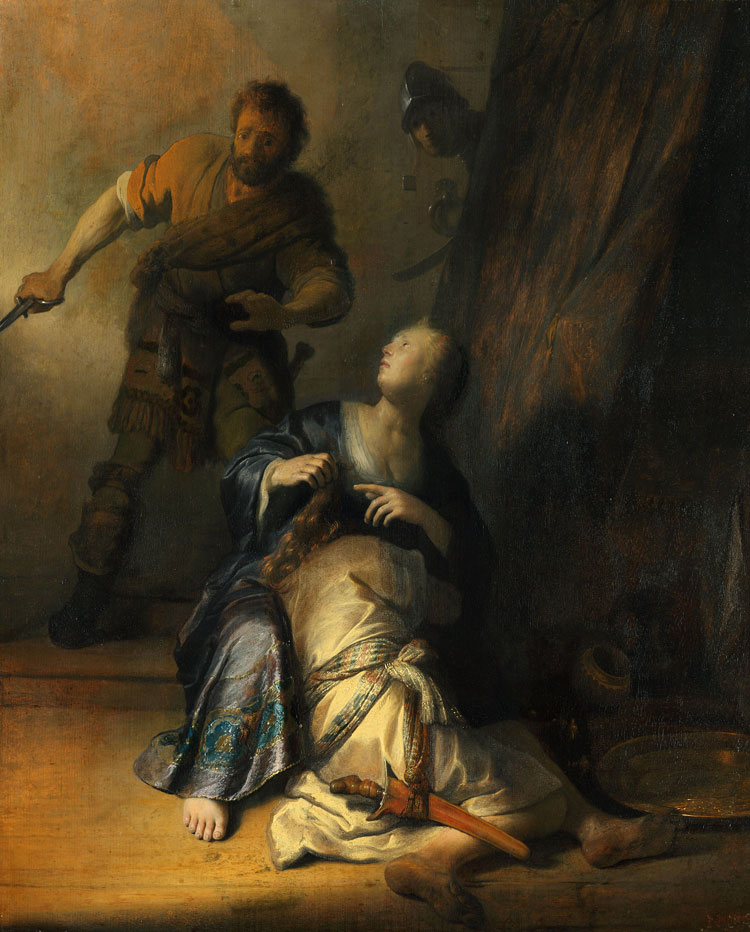 Over the years, these three paintings have flip-flopped in attribution between Lievens and Rembrandt. Today’s two firm attributions are now reasonably well attested (both are, in fact, signed), but confusion between the artists dates back to as early as 1632, when Rembrandt’s 1628 Samson and Delilah is listed in the collection of the Prince of Orange as by Lievens. It was probably bought by the Prince’s agent, Constantijn Huygens, who visited the two young Leiden artists in 1628 or 1629.

Despite Leivens’s undoubted precocity and felicity, Huygens came away most impressed with Rembrandt. The miller’s son, he declared, could be “compared with all Italy, indeed all the wondrous beauties that have survived from the most ancient days … [Rembrandt] devotes all his loving concentration to a small painting, achieving on that modest scale a result that one would seek in vein in the largest pieces of others.”

Huygens was especially taken with a dramatic painting Rembrandt was working on, Judas Repentant (1629) – present in this exhibition courtesy of a private lender. The image shows a despairing Judas, who has been tearing his hair as he tries in vain to reverse his betrayal of Jesus by returning the 30 pieces of silver. Huygens praised at some length the emotional power of the figure of Judas, “his entire body contorted in pitiable anguish”, and bought the painting for his master. 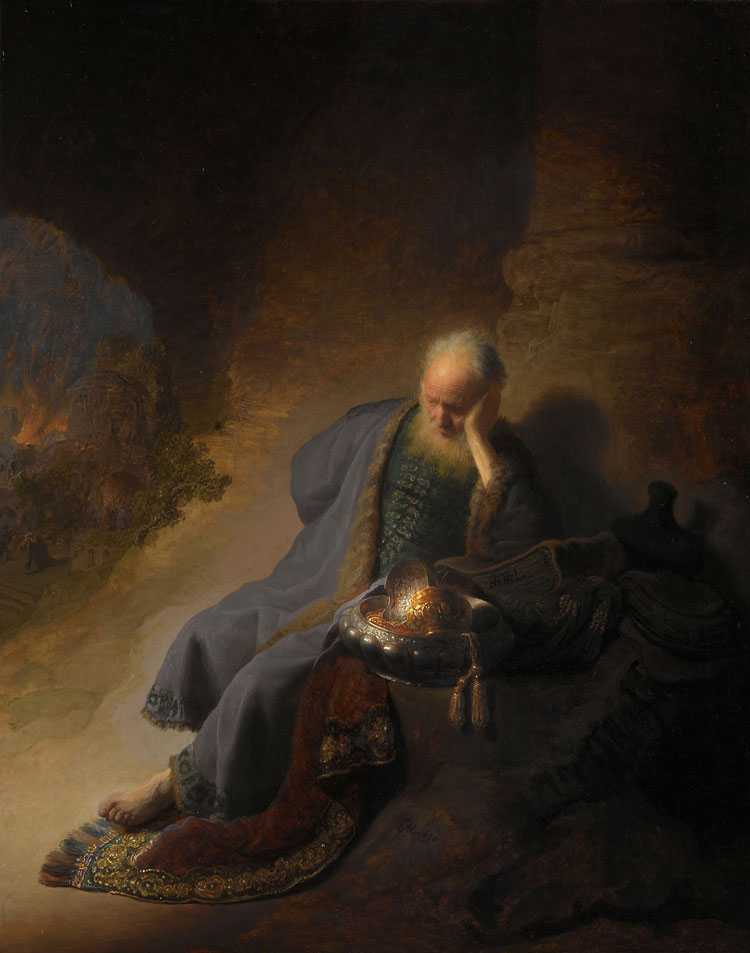 A year later, Rembrandt produced what might reasonably be regarded as his first masterpiece, and certainly his greatest Leiden painting, Jeremiah Lamenting the Destruction of Jerusalem (1630). Both intimate and expansive, delicate and broad-brushed, this intense work presents us with a richly robed, but barefoot Jeremiah in introspective contemplation as, in the distance, Jerusalem burns. Rembrandt has arrived.

For me, this is the peak of the show, but we follow him for a little longer as he moves from Leiden to Amsterdam. The shipping hub of Europe, the city was an economic and artistic powerhouse, full of merchants wishing to advertise their wealth and culture by commissioning paintings. 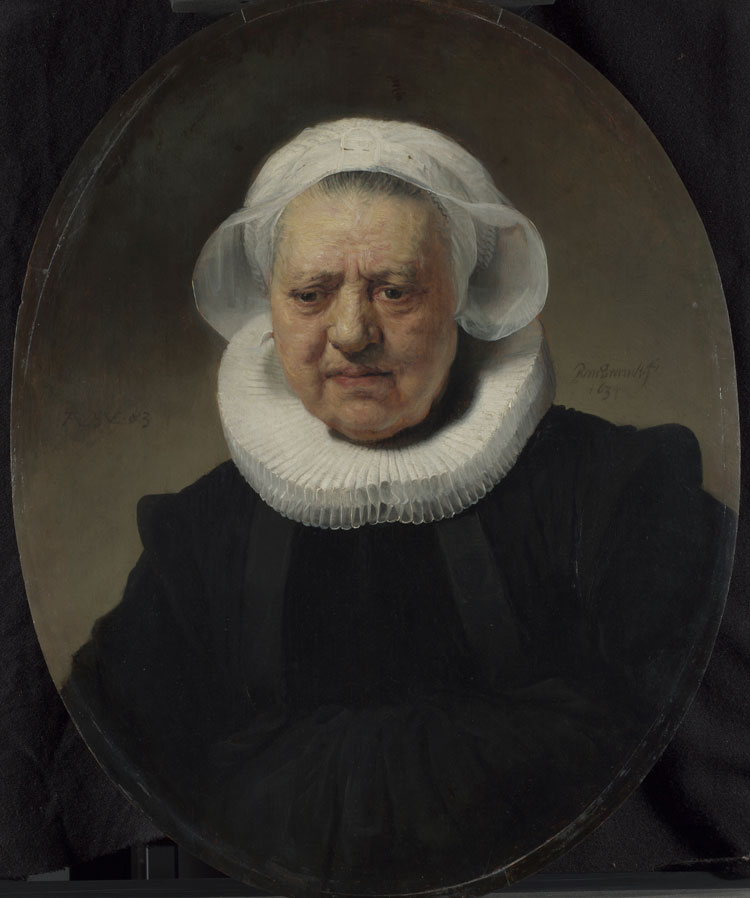 Rembrandt quickly became one of Amsterdam’s leading portrait painters, and the exhibition ends with his Portrait of an 83-year-old Woman (1634). Probably the mother of a Rotterdam brewer who sat for Rembrandt at about the same time, the picture brings together his skills as a portraitist with his more universal interest in the weathered faces of the long-lived. It also belongs, in style, technique and quality to Rembrandt as we know him. And it is signed “Rembrandt”. Through this show we have watched as the teenage miller’s son – who monogrammed his work RH (Rembrandt Harmenszoon, ie son of Harmen), RHL (the L for Leiden) or RHL-v Rijn – transform into the confident, successful young artist who depicts himself in an ostrich feather cap and signs himself simply with his first name.

It is a journey all the more interesting for not running smooth, for its visible trial and error, experimentation and effort. “He struggles … practices … persists,” says Van Camp. “He was not a born genius … It’s a heart-warming story. We can all become Rembrandt if we try hard enough!” 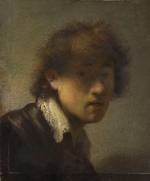 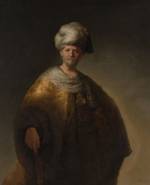 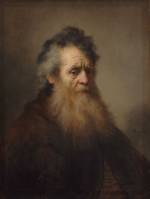 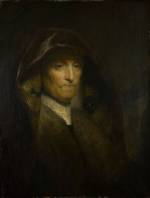