Young Bomberg and the Old Masters

Young Bomberg and the Old Masters 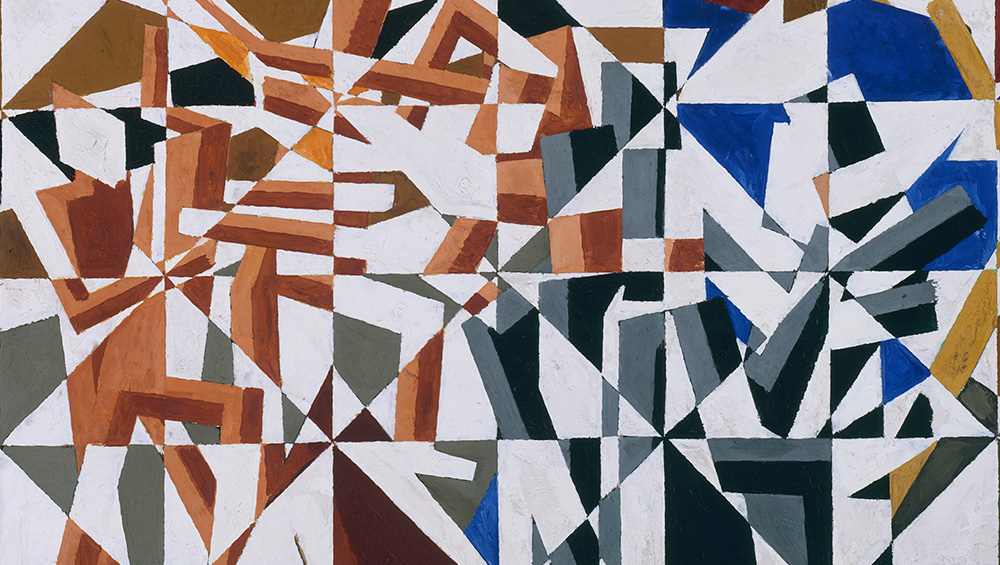 There have been several good exhibitions on the work and teaching of David Bomberg (1890-1957) in recent years, particularly in and around London where he lived and worked for most of his life. I especially looked forward to this exhibition at the National Gallery because it promised an insight into Bomberg’s work through its own collection and the impact of the old masters on young Bomberg and his painting.

The exhibition has been widely advertised for some time and I visited in great anticipation, keen to better understand the work of a painter whose teaching was formative for other celebrated British artists such as Leon Kossoff and Frank Auerbach. I was disappointed to discover that the exhibition took up just one tiny room in the gallery, containing only nine works by Bomberg, some of them studies, and two works from the National Gallery’s collection. The exhibition’s introduction talks about “the old masters which may well have inspired young Bomberg”. I found the provisional nature of this statement somewhat worrying when it is the very idea that underpins the exhibition. 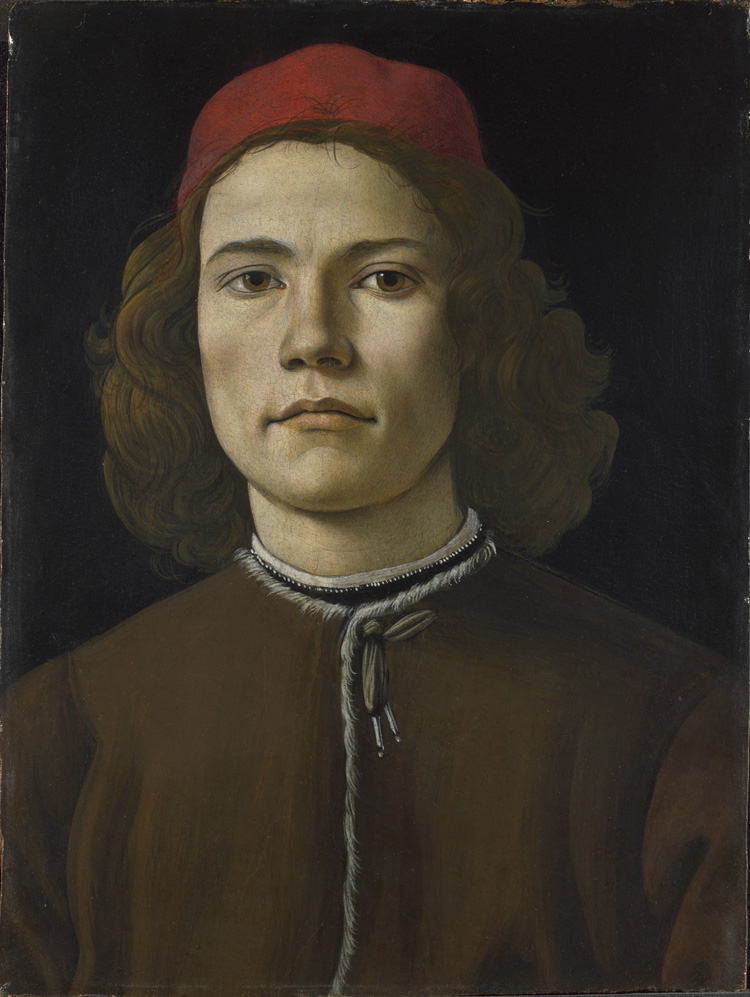 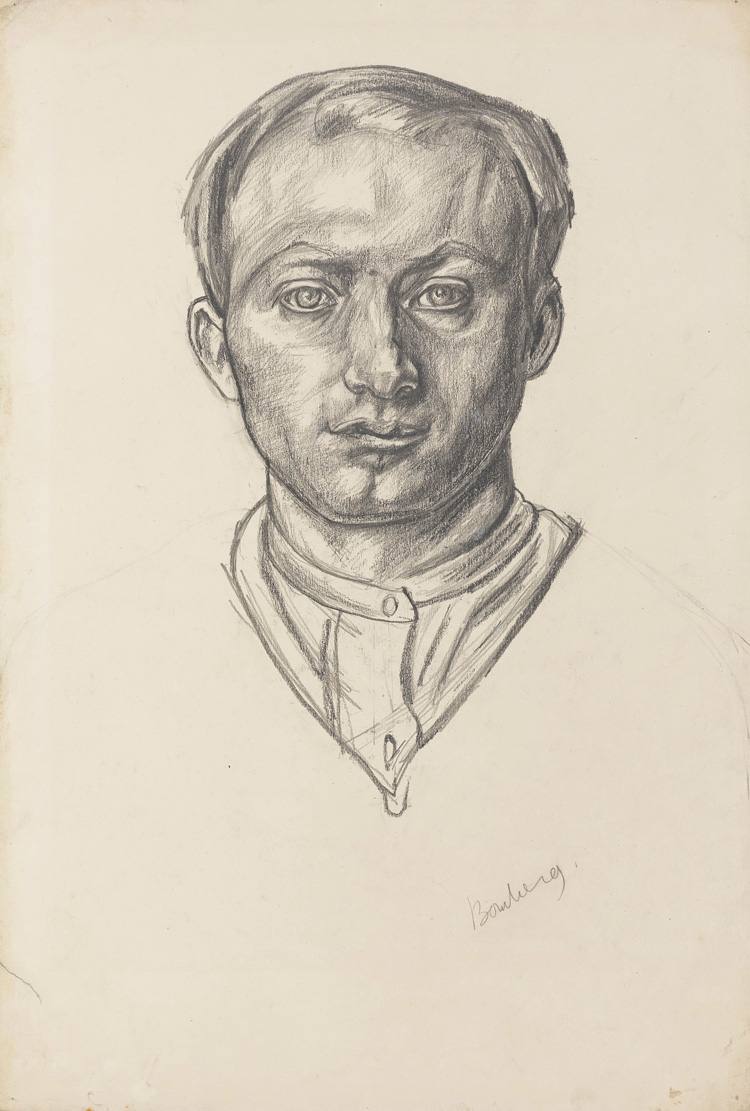 The first work we encounter is Sandro Botticelli’s Portrait of a Young Man (probably about 1480-5), which we are told was so significant for Bomberg that he took his sister Kitty to the National Gallery to see it. He wanted to draw himself in this mould and even asked his father to make him a similar shirt. Self Portrait (1913-14) was the result. His frontal pose and direct gaze match Botticelli’s portrait. The two works hanging side by side and the backstory connecting them make for a strong start to the exhibition. 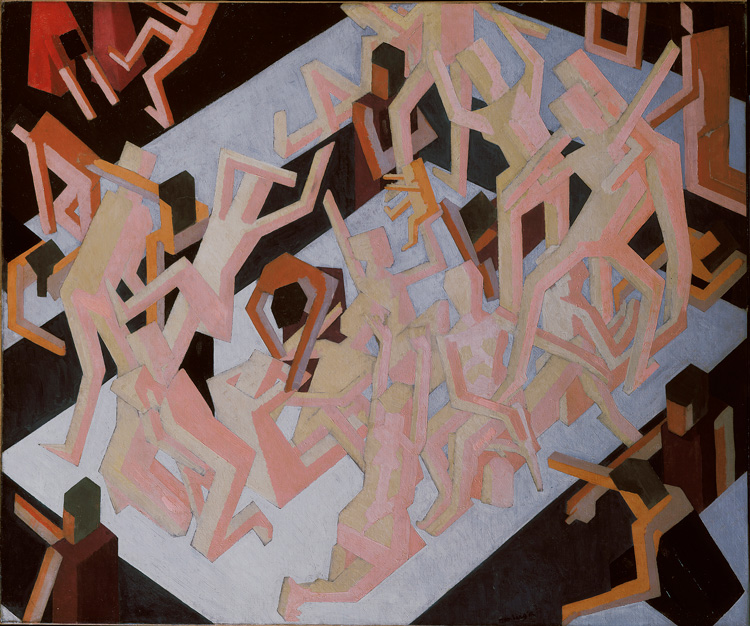 Appearing next in the exhibition, Vision of Ezekiel (1912) and Study for “Vision of Ezekiel” (probably 1912) were made by Bomberg when his mother died of pneumonia aged 48. The Old Testament Book of Ezekiel and its story of the resurrection of the dead inspired him. In the centre of the painting, a mother holds up her child. 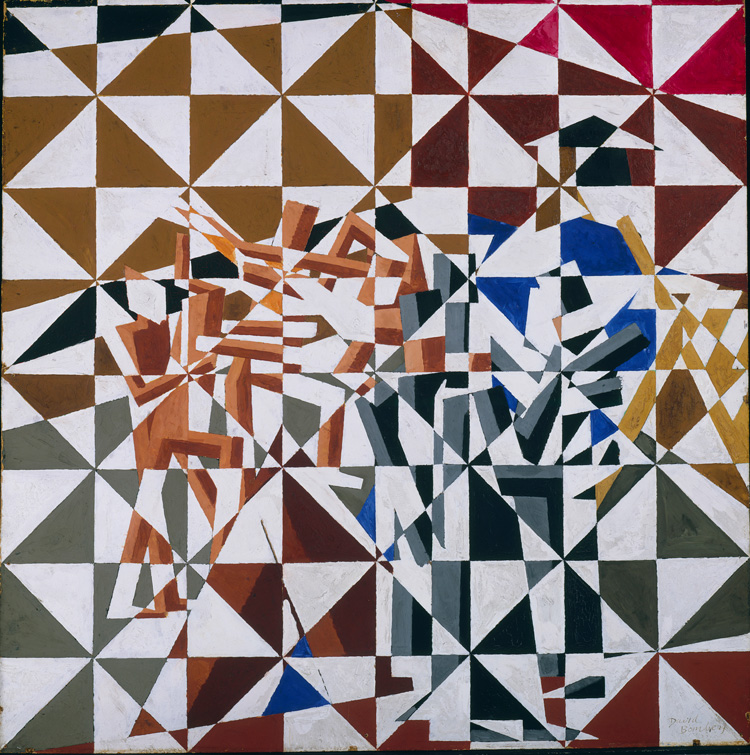 Next, we have Ju-Jitsu (1913) and Study for “Ju-Jitsu” (about 1912-13). Bomberg’s brother was a boxer and frequently visited the Judeans gymnasium in London’s East End. The painting is divided into a 64-square grid, which shatters everything into almost abstract fragments that make the human figures difficult to find. 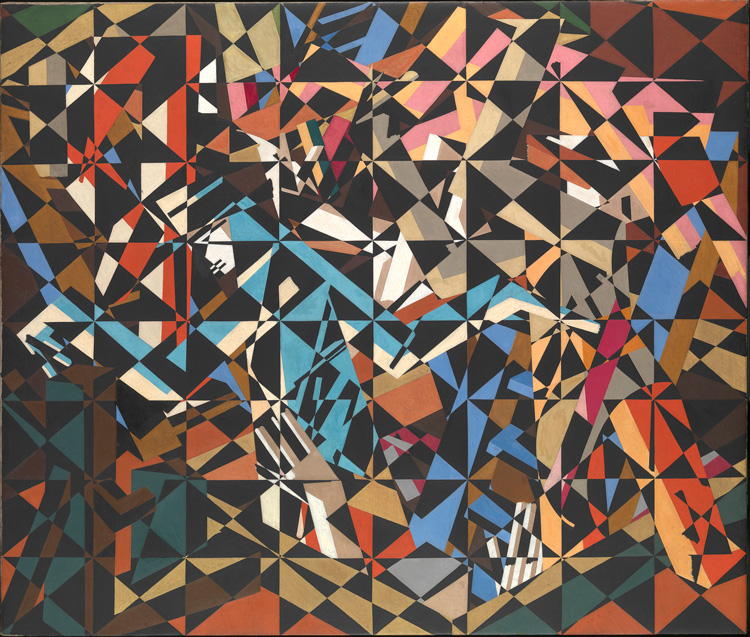 In the Hold (1913-14) and Study for “In the Hold” (c1914) show human figures, including children, in the hold of a cargo ship. The sense of movement in the charcoal study in particular conveys the urgency with which helpless immigrants try to exit the hold and disembark. The overall chaos and hands reaching upwards for assistance act to underline the madness.  As in Ju-Jitsu, Bomberg uses a 64-square grid to explode the image and emphasise the intensity of the situation the immigrants find themselves in. Once again there is a biographical link since Bomberg’s parents had emigrated from Poland because of antisemitism. 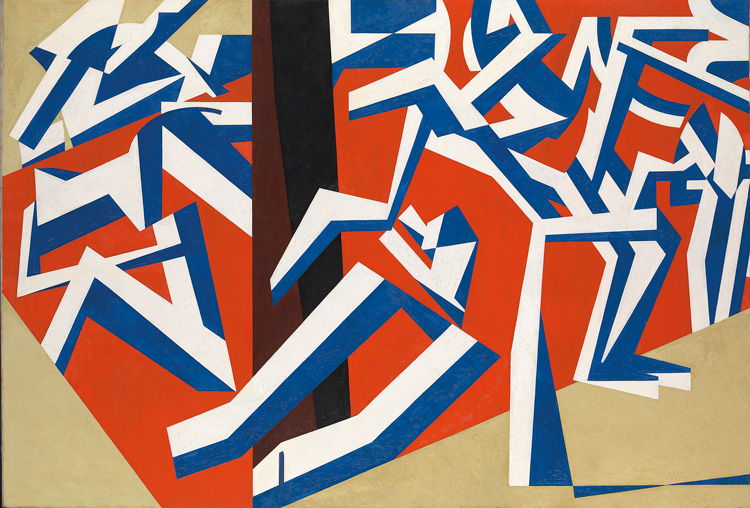 The Mud Bath (1914) is one of Bomberg’s best-known paintings. A key source, we are told, was Schevzik’s Vapour Baths, a popular venue in Brick Lane, Whitechapel, frequented by local people for “purification”. The National Gallery’s interpretation also suggests that, in retrospect, the painting is prophetic of the first world war. 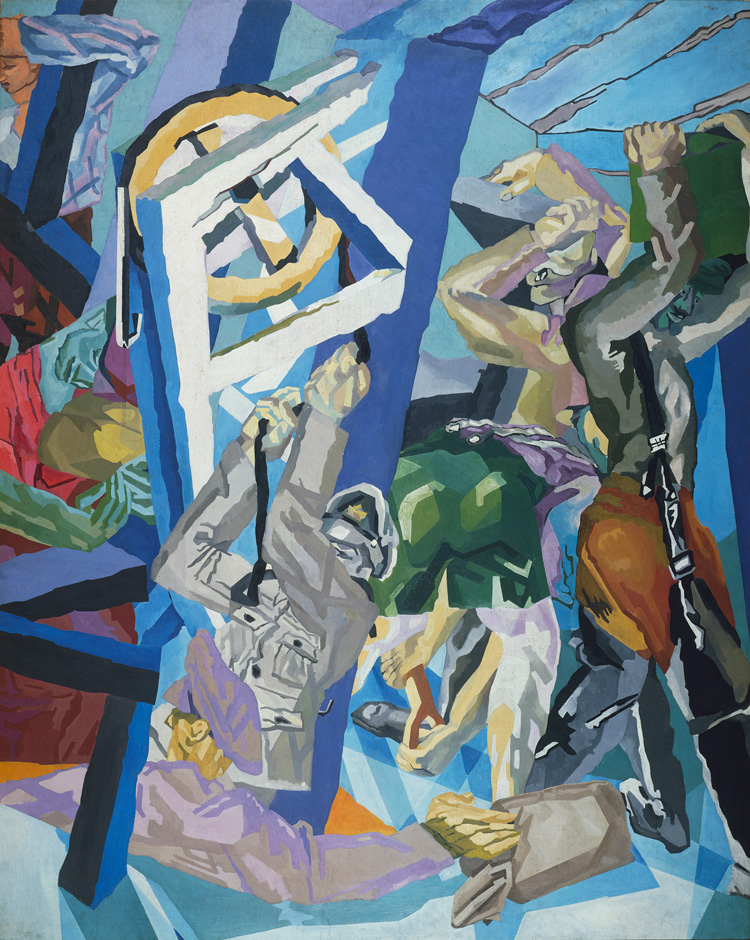 Study for “Sappers at Work: A Canadian Tunnelling Company, Hill 60, St Eloi” (1918-19) is the last work by Bomberg in this small exhibition. Commissioned by the Canadian War Memorials Fund, it commemorates the bravery of tunnellers who carried out a mine attack on a German observation post in France. This first version of the work was rejected for its brutality – Bomberg himself had just returned from military service. Adjacent to this painting by Bomberg hangs the National Gallery’s The Agony in the Garden (1590s) from the Studio of El Greco. 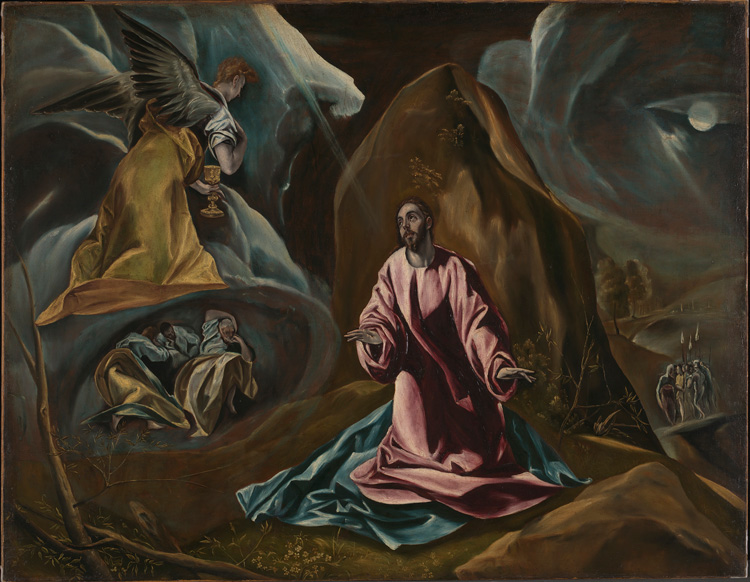 Where does all of this leave the viewer in connecting Bomberg’s work with old masters in the National Gallery’s collection? The comparative study of Botticelli’s Portrait of a Young Man and Bomberg’s Self-Portrait provide a strong start, as I have already said. In Vision of Ezekiel, Ju-Jitsu, In the Hold and The Mud Bath, we are given plausible biographical sources for Bomberg’s interest in his subjects. Study for “Sappers at Work” was a commission, but even here there are biographical notes that may explain his approach.  Biographical notes on artists and their work are always interesting and often add to our understanding of their work, but the promised links to old masters seems more of a passing gesture than the foundational premise of the exhibition.

At the end of the exhibition, an interpretive wall text is provided with several small images of works that “may well have inspired young Bomberg”.  Michelangelo’s The Entombment (c1500-1), Paolo Veronese’s Unfaithfulness (c1575), Sandro Botticelli’s Mystic Nativity (1500), Piero della Francesca’s Baptism of Christ (after 1437) and Antonio and Piero del Pollaiuolo’s The Martyrdom of Saint Sebastian (completed 1475) all appear here in thumbnail fashion. The text encourages visitors to seek these works out elsewhere in the gallery. I understand the desire to send visitors out to explore the National Gallery’s collection beyond the scope of this small exhibition, and in one sense it is a good strategy to encourage self-directed looking. However, given the exhibition’s claims, it would surely have been preferable to see the works together, side by side, to be able to make visual comparisons in a direct manner.

Bomberg said: “We must build our new art life of today upon the ruins of the dead art life of yesterday.”  It is a matter of record that he visited the National Gallery and was particularly drawn to some paintings in the collection. He also visited the Victoria and Albert Museum, the British Museum, the Royal Academy of Art and many other galleries and museums. This is hardly surprising and, indeed, it is commonplace for artists to look at the work of their predecessors. However, the provisional nature of this exhibition’s thesis, the small number of works and the general lack of opportunity for direct comparisons, other than in two instances, mean this exhibition is disappointing. The catalogue is marginally better in its presentation of ideas, but it is the ideas themselves that seem to be without sufficient foundation. Perhaps a fuller curatorial treatment would have convinced me, but we will never know. The one good thing about this exhibition is that it is free and it is always good to see preliminary studies alongside finished works.