Xu Bing, the internationally acclaimed Chinese conceptual artist who works in a variety of disciplines and materials, in particular printmaking, ink painting, calligraphy, text and installation, and has also worked with silk worms and pigs, has just completed a major project in New York, the installation of his magnificent Phoenix

Two soaring sculptures of mythical birds called Feng (male) and Huang (female) in Chinese, they measure 27 metres and 28 metres in length respectively, and are 5 metres high and 6 metres wide. No featherweights, they tip the scale at 6 tons each and are suspended 6 metres overhead from an aluminium “supergrid”, hung in the vast nave of the Cathedral of St John the Divine in Morningside Heights, Manhattan, until February 2015. These phoenixes, dotted with bright points of tiny LED lights are assembled from an assortment of battered shovels, used hard hats, jackhammers, saws, drills, tubing and other tools and reclaimed construction detritus that have been transfigured to create creatures of imperious, startling beauty.

Highlights of the opening ceremony of Phoenix: Xu Bing at the Cathedral, 1 March 2014

Xu Bing was born in Chongqing, China in 1955, although his family came from Wenling in Zhejiang province. His father, a professor at Peking University, was dismissed from his post during the Cultural Revolution and Xu Bing was sent to the countryside for two years for re-education, resulting in a lasting empathy for the hardscrabble lives of labourers. He later attended the Central Academy of Fine Arts (CAFA), China’s preeminent art school, completing his BFA in printmaking in 1981 and his MFA in 1987; he also taught there. However, due to the uncertainties of China’s post-Mao transformation, he left the country in 1990, accepting an invitation to attend the University of Wisconsin, Madison in the United States. Xu Bing, no stranger to New York City, lived in the East Village for nearly two years before moving to Williamsburg in 1994 (where he still has a studio). He returned to Beijing in 2008 to assume the vice-presidency of CAFA.

Xu Bing is the recipient of numerous awards including a grant from the MacArthur Foundation in 1999, the Fukuoka Prize in 2003 and the first Artes Mundi prize in 2004. He was awarded an honorary doctorate from Columbia University in 2010. He has also shown widely, including at the Venice Biennale and other notable international exhibitions and at the Metropolitan Museum of Art and the Museum of Modern Art in New York and the British Museum in London, as well as at other museums, galleries, public and non-profit spaces and academic institutions.

The following are excerpts from a telephone conversation with the artist in Beijing.

Lilly Wei: Could you tell me a little about how Phoenix came to be?

Xu Bing: I was commissioned by the Taiwan-based Ravenel International Art Group in 2008 to make a permanent sculpture for the atrium of the World Financial Centre in Beijing, designed by Cesar Pelli. I went to the construction site and was shocked by the working conditions of the labourers. Not only were conditions harsh, but there was very little regard for safety. It made me extremely uneasy. I was struck by the contrast between the great high rises being built everywhere for the rich, symbols of China’s rise as an economic power, and the miserable situation of the workers. That gave me the idea to use the debris from the site to make two phoenixes, to show the contrast. Constructed out of discarded building materials, I wanted them to be witnesses to the deep connection between labour and wealth in China.

LW: That was a little before the [2008 Beijing] Olympics, wasn’t it? Did that have an impact on your project?

XB: Yes. I started my project several months before the Olympics and since the government was determined to improve the quality of the air for the games, they forbade trucks from entering Beijing during the day. We needed to collect materials from the site of the building, but construction had also been halted and, with no transportation, our project was on hold until the Olympics was over. Then came the global recession and the developers of the World Financial Centre withdrew their support. They said it looked unfinished and wanted me to make it more decorative, but I couldn’t do that without compromising the integrity of the work. I also suspect they withdrew because of financial losses.

LW: So what happened then?

XB: Around three months later, Barry Lam [a leading patron of the arts in Taiwan] came to my studio and saw the photographs we had taken of the project and became very excited by them. He agreed to sponsor the completion of the work, acquiring it for his museum of art and technology in Taiwan. But we had asked that, before it went to Taiwan, it would be shown in China and America, and he agreed.

LW: You said you calculated that it would be a rather short project, taking around four months to complete. Instead, it was finished in 2010, two years later.

LW: After it was completed, it was shown in the plaza in front of the Today Art Museum in Beijing and from there it went to Expo 2010 in Shanghai. And you showed the preparatory sketches, plans, photographs and blueprints for the project at the Arthur M Sackler Gallery at the Smithsonian in Washington, DC for several months in 2012. For its first showing in the United States, it went to the Massachusetts Museum of Contemporary Art (MASS MoCA), and was on view for nearly a year before coming to St John the Divine. How did MASS MoCA and St John the Divine become venues?

XB: I wanted to show Phoenix in America, but it was difficult to find an indoor space large enough to accommodate it. MASS MoCA and St John the Divine were both suggested as possibilities. We went to North Adams with [art critic] Jason Kaufman  to discuss the project with [the director of MASS MoCA] Joe Thompson. I had a catalogue about it for him and, as I was giving it to him, he gave me the very same catalogue. He had received it from a supporter of the museum and said he had wanted to show Phoenix ever since seeing the images in it. And [the dean of St John the Divine] the Very Reverend Dr James A Kowalski was also very receptive.

LW: And then it came to New York – on a convoy of 11 flatbed trucks. The transport and installation must have been a tremendous undertaking. Any glitches?

XB: It wasn’t an easy installation. The scale was so large and it weighed so much. New York has strict regulations and we had to get permission for everything. We weren’t allowed to move the trucks during the day and to cross the bridge into Manhattan required special permission. We closed Amsterdam Avenue for three nights to accommodate a giant crane. There was also a major snowstorm and record low temperatures. We had planned to take the sections through the main doors, but they were stuck – who knows when they were opened last? – and that delayed us and was costly, but we managed to do it in four days.

LW: Would you talk a little about the conceptual base of Phoenix?

XB: I was addressing the poor working conditions of the labourers and the low-tech methods of construction as a glaring contrast to hi-tech capitalism, as represented by the World Financial Centre. Phoenix was originally conceived for the enormous glass greenhouse at the centre of the WFC. My initial idea was to gather only the tools, daily objects used by the workers, and waste materials from this site, but afterwards, when Phoenix was not going to be installed there, I decided to expand the scope of the project and use salvaged materials from construction sites all over Beijing.

I thought that making a sculpture out of trash would be a really effective contrast to the building. It would be raw, indicating how rough working on site is, how rough such a life is. I found it interesting that the luxury of the building made the piece even more raw, more abrasive rather than the reverse. And each item had its own story and history because the workers had handled them, used them. Inside the birds, we put LED lights. In the daytime, the lights aren’t really visible, but they become much more emphatic when it gets dark. At the Today Museum, where it was placed outdoors, all you could see at night were the lights. They formed a constellation of a phoenix and it was very beautiful. To me, phoenixes are fierce, powerful and about hope, the sign of a more utopian future.

LW: How was the Phoenix affected by its various sites?

XB: I found the indoor installations more effective than the outdoor ones in the end, although each context was different and changed the meaning of the work. At MASS MoCA, the ceiling height was a little lower and the space was industrial. North Adams was an old factory town on the verge of extinction and now, after the creation of MASS MoCA, it is rising again like a phoenix. To me, it seemed as if the phoenixes had returned to their origins. The Cathedral of St John is a much different kind of structure. It’s a sanctified space of great beauty in the European Gothic tradition and its extraordinary height allowed the sculptures to soar. I was worried that the birds would be too small for it, but they were just the right size. It is their presence, their pride, and their confidence, even if made of poor materials, that enabled them to fill the immensity of that space.

LW: How does this project connect to your other projects? What might link all your works?

XB: My work is primarily based on traditional Chinese culture, from philosophy to Buddhism to the venerated ancient books of Chinese wisdom. I’ve also spent a lot of time in the countryside travelling to isolated areas to research folk art. China is still an agrarian country and has a long history of folk art; the tale of the phoenix comes from this tradition. That culture is unique and I want to keep it alive.

LW: A sense of history or the past seems to be missing in much of contemporary art. I think of what TS Eliot once wrote, that the artist “lives in what is not merely the present, but the present moment of the past”.

XB: My thought is that art comes from the times, from daily life, and you must be attentive to what is happening now. Art must confront the questions of today, and wherever there are questions, you will have art, you will find a new form, a new language, but it is not disconnected from the past. Phoenix is both direct and metaphoric, a portrait of China’s collective memories and its present realities. Phoenix is a giant transformer toy as well as a mythical bird. 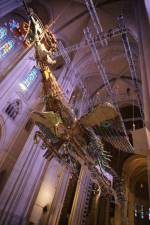 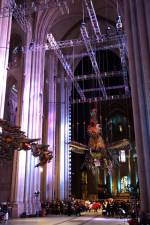 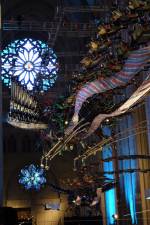