The title of the exhibition comes from a statement made in 2013 by Georg Baselitz, the German artist who sometimes hangs his large canvases upside down 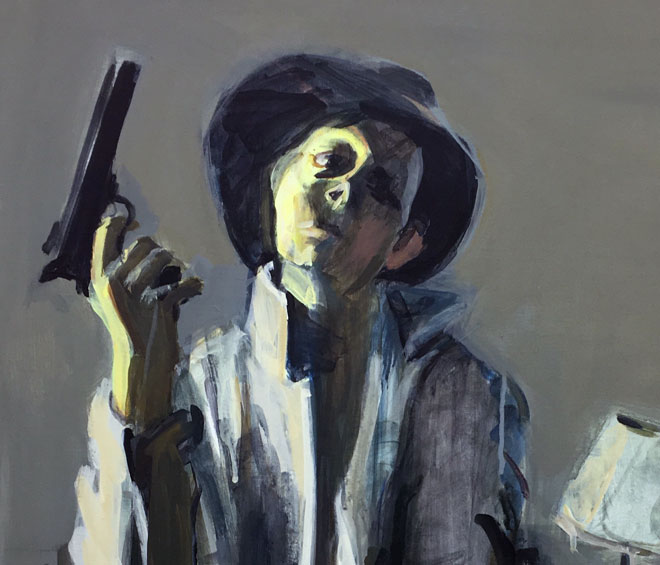 It is an idea – to hang pictures upside down – people turn pictures in their studio so as to renew their view of a work they have lost sight of … See where this is leading? Being snippy when writing a review is not my usual modus operandi, but George Baselitz’s comment is so obviously idiotic that I’m goaded into responding in kind. Baselitz’s upside-down idea has worn thin; he seeks attention. Of course, the title of the exhibition currently at Turps Gallery/ASC Gallery is ironic, a provocation immediately countered by the content of the show, which includes 14 exemplary painters, each of the cross on a sphere type, rather than the arrow on a cannonball. I won’t mention the B word again; instead, I shall focus on the important issue here – this marvellous exhibition of works. 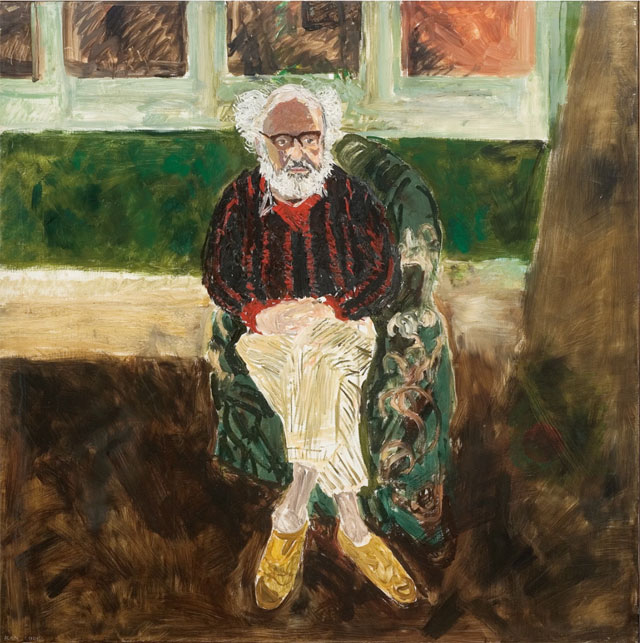 Downstairs, the ASC Gallery begins the show with a self-portrait by Jean Cooke. Playwright Nell Dunn described Cooke’s portraits as “quite spare and lyrical”, then added: “Yet, like her, they have a sense of the unpredictable.”1 Cooke fashions a deceptively calm surface in deep rich colour tones that suggest a dawning. She looks at us directly: her intense gaze pulls the viewer in to study the image (“I painted myself how I wanted to look,”2 Cooke said), a generous open face with ruddy complexion, a comfortable sweater, a floral curtain and, behind her, through the window, a line of grey terraced houses. She signs this painting “Jean Bratby”, “because he said I must”3 yet she captures herself in a place and time and on the cusp of new social and conceptual beginnings. The “he” she refers to is her husband, the painter John Bratby, and her self-portrait is paired in the exhibition with a painting she made of him, in which he appears as a balding man, with large yellow shoes. (Did he fidget as he waited his turn to hold a brush?)

Cooke’s two paintings were made in the mid-1950s, when London was still struggling to pull itself out from the shadows of war, the streets were patched with bombsites, and sandwiches were thin and coffee was often weaker than tea – it wasn’t until 1954, that 14 years of rationing finally ended. Into this damp, grey world came the “kitchen sink” artists, a term coined (in the December 1954 issue of the journal Encounter) by critic David Sylvester, who observed that the realist artists known as the Beaux Arts Quartet (John Bratby, Edward Middleditch, Derrick Greaves, Jack Smith) painted ordinary people… living ordinary lives. And here I have fallen into a much-repeated trap, discussing the arrows and cannonballs because they have been the ones exhibited and written about in the past, and (to state the obvious), all our pasts have been constructed in stories of men, so looking back is looking mostly at men. The only way to set the balance straight now is to focus more on the spheres and crosses. Cooke’s paintings are images of her real world, shot through with rich colour – never lumpy or brash – direct and beautifully observed, with wit and courage, her everyday world made clear, full of bright pigment, fresh air and hope.

Cherry Pickles’ portraits are contemporary and cleverly performed, with a lightness of touch and a hint of the cinematic. In the ASC Gallery, Pickles is Dylan Thomas, tipping a chair, dragging on a cigarette and kicking her feet up a wall. Upstairs in the Turps Gallery, she is William Burroughs, head and hat tipped, gun cocked, eyes locked on us. She mimics iconic photographs, placing herself in someone else’s life, taking on a role, acting a part, and all the while nodding to ways of seeing and photographing, drawing and painting today. Repeatedly reframing herself as a celebrity framed, this is a joyous series of painted performances. 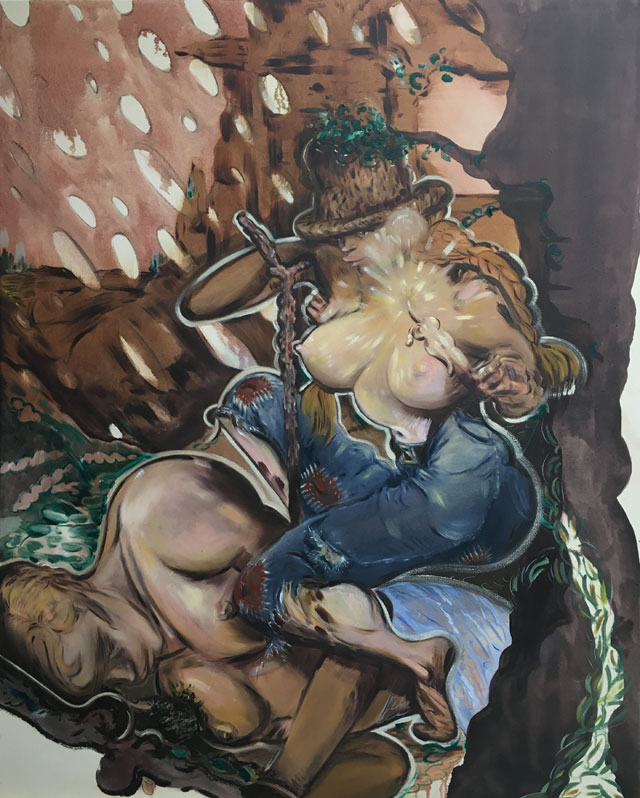 Hannah Murgatroyd’s large fluid drawings provide a heady mixture, echoing the figures of Tom of Finland, with a splash of teen-magazine dreams, a smattering of Jean-Honoré Fragonard’s 1700’s swinging floozy and, then, among all of this, she leaves us with space enough to breathe and make a sense of her convergence of imaginings. 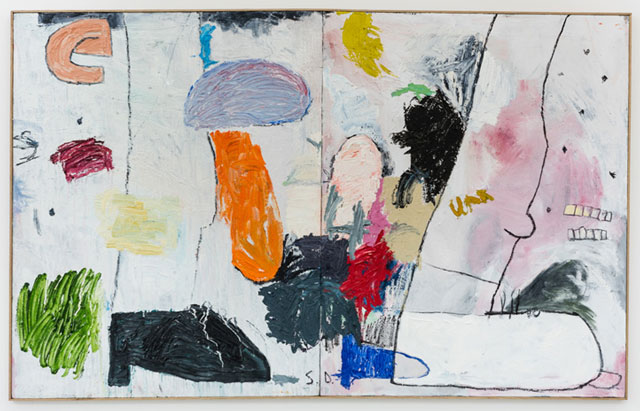 Stevie Dix also gives us space; in her 2017 Ne Me Quitte Pas, large, flat coloured shapes float across the canvas, at first seeming to be without any recognisable form, but as a line leads the eye towards another shape, murmurs of Philip Guston and Rose Wylie come to mind. Dix focuses on a limited area and, with great energy and fabulous flourishes of brush, blows it up beyond recognition. Even in her smaller work Jazz (2017) exhibited upstairs in the Turps Gallery, there appears at first to be a collection of abstracted forms until glanced at from a certain point of view and then an “almost profile” surprises the eye. There is a sleight of hand at play here, knowing exactly how much (and not a bit more) of a visual hint is needed to trigger a suggested image, which evidences a primed innate visual clarity. 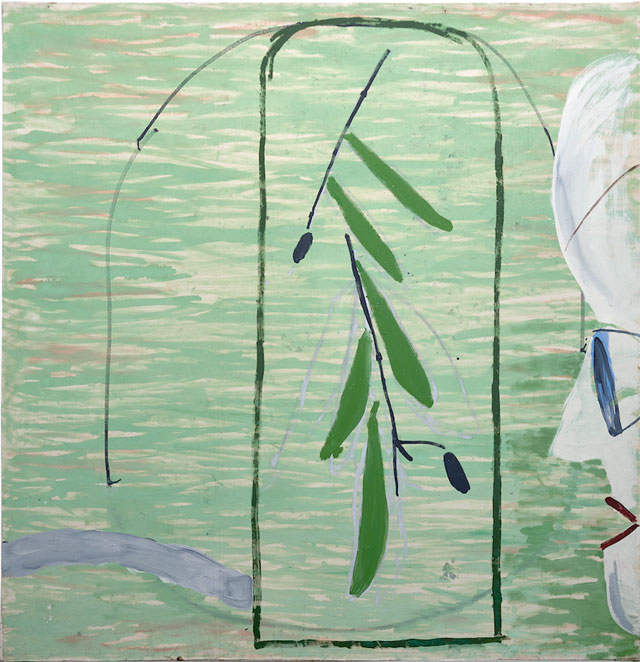 Wylie manages a marvellously odd sleight of hand in her Olive Oil Label (2000): there is so much space for the eye to roam across the canvas, painted in green diagonal strokes with plenty of empty canvas showing through like grass waves, that it is easy to miss a girl’s profile on the far-right side, even though she is huge and startlingly peculiar. Bug eyes, swollen forehead, thin lips, little pointy nose, everything about her is boldly awkward and utterly gorgeous in its subversion of the usual manner of what a profile can look like. It makes you itch to copy and play and dance with abandon, much like the figures in Wylie’s 2016 Cuban Scene, Smoke (showing downstairs in the ASC). 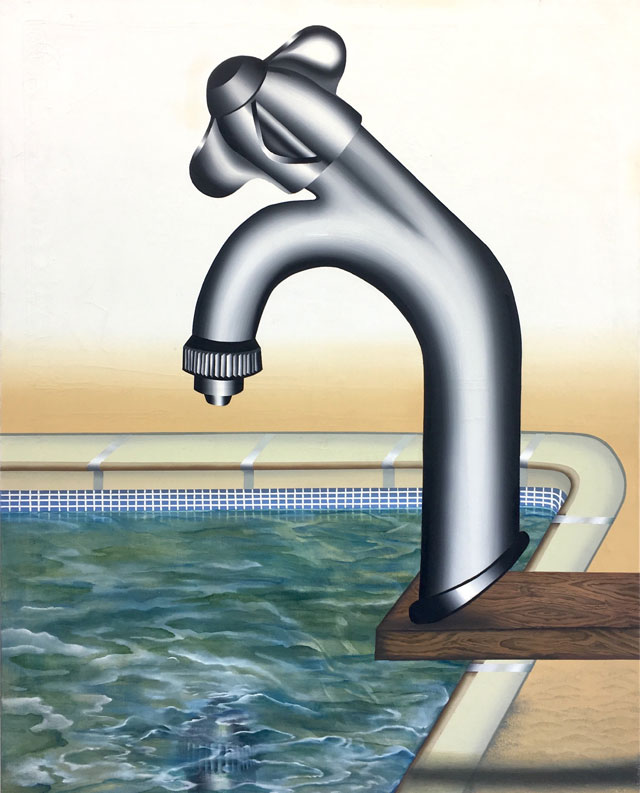 Roberta Booth has three paintings in the show. Critic and educator Professor Norbert Lynton said of her work: “I admire the upfrontness of her idiom, at once pop and cultured, and also her technical mastery ... there is no one else who speaks of the sensory and spiritual with such vigour.” Booth’s paintings in this exhibition show the powerful design of 70s everyday objects: in 1970’s Oasis, a tap painted as though airbrushed, masked and glinting chrome, tips forward on a diving board ready to plunge into the liquid below. Booth’s adept use of material enables her to apply different painting styles together on one canvas – constructing light-reflecting water and (as though fashioned by a different hand) shaping the tap in hard solid chrome. In her 1973 The Five Stages, solid chrome bottle openers hover Metropolis-like over a chessboard, anthropomorphised shapes that become a battalion of robotic soldiers ready to advance. There is much strangeness to be imagined in Booth’s works. 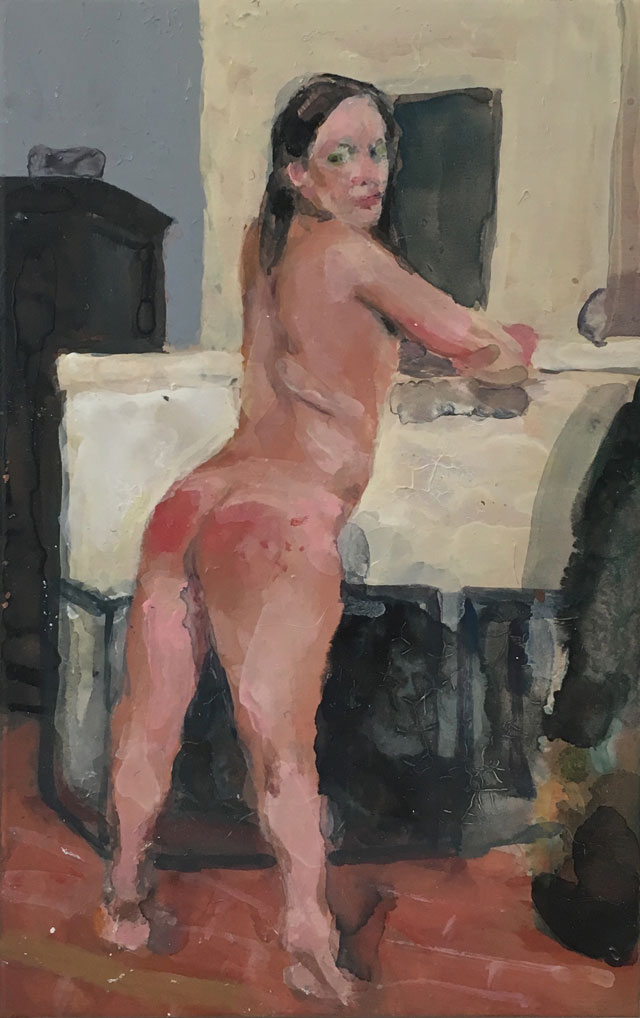 The top half of Geraldine Swayne’s exquisite and tiny (6 x 8cm) undated Don’t Look Away is used as the poster for this show: the bottom half of the picture is censored – you will have to visit the exhibition to see why. Swayne has two other paintings exhibited, a larger work titled Great Big Slag (2015), in which she includes hand-written text as part of the image. The figure is of a girl whose body is distorted in relation to the size of her head, confusing the reading: are we looking at a very young girl or an adult? Is the text “great big slag” us or Swayne jeering at her? The third image, Buttastic (2015), is another small work (8 x 6cm), in which a woman, all rosy and naked, looks over her shoulder at us looking at her bottom.

Swayne’s use of paint makes these tiny images seem monumental, yet we must get closeup and intimate to see them clearly. Her dexterous work evidences another example in this exhibition of the skilful mystery of these practitioners. English language is hobbled with gender imbalances: in avoiding the word “mastery”, which implies that arrows and cannonballs own expertise in all professions, and its opposite, “mistress”, which suggests disempowerment, I settle on the word “mystery” to celebrate the unexpected surprises that can arise in the making and viewing of pictures. Gender balance has a long way to go and there will be more upside-down hurdles across its path, but we can be satisfied that in this exhibition there is plenty of “skilful mystery”, sleight of hand and wit and imaginings. The show goes some way towards beginning to redress past imbalances, and I look forward to the second exhibition in this series, and hope there will be many more.

1. Ruth Borchard Collection: ruthborchard.org.uk/collection/jean-cooke
2. Ibid.
3. From the video Jean Cooke (1927-2008), published April 2015: youtu.be/HVQIFaPmO4I in which Cooke speaks about her life, her practice and her tumultuous marriage to fellow artist John Bratby. 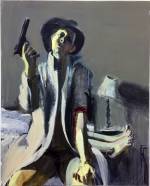 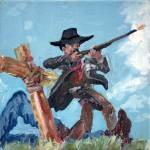 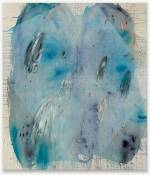 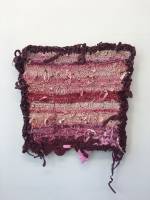