How much is too much? Wim Delvoye in Moscow

Wim Delvoye, a bad boy of the art world, is showing in Moscow this summer. He is at the Gary Tatintsian Gallery and in the Pushkin Museum of Fine Arts. While for the world-renowned Delvoye having a gallery exhibition in Moscow is not unprecedented, a show in a museum known for its collection of classical art and its conservatism is an event of note. According to a museum source, the decision to mount this exhibition was made on the spur of the moment, when the artist was in town ahead of his show at Gary Tatintsian’s.

Delvoye’s one-person shows at the Louvre and the Rodin Museum helped to pave his way to the Pushkin. There is no doubt, too, that the stepping down last year of Irina Antonova, a nonagenarian director of the museum since 1961, and the assumption of this position by Marina Loshak, formerly in charge of the Manezh exhibition space near the Kremlin, contributed to this decision. Even though Antonova was named as the museum’s president, a position created just for her, the change of power structure must have influenced the entry of Delvoye, a provocateur extraordinaire, in what used to be known as a citadel of conservative taste. It is a tour de force for the new director because, despite the visual seduction of Delvoye’s objects, his ultimate interest lies in scatology.

Delvoye can be called a sculptor because his art is object-based. He is interested in making things that have a twist to them, sometimes a literal one. His art is often described as a combination of high and low, sublime and profane, exceptional and universal. At the beginning of his career, Delvoye applied traditional Dutch ornamental patterns to common household tools, such as saw blades, gas tanks, shovels and ironing boards. In the early 1990s, he continued this trend on a real-life scale by ornately decorating or carving hefty construction devices, such as cement mixers. He also wandered into ethically controversial terrain by tattooing live pigs with fanciful patterns borrowed from bikers’ repertoire, as well as adorning the animals’ skins with logos from the motorcycle manufacturer Harley-Davidson and Louis Vuitton’s leather bags. To escape the wrath of animal-rights activists and Louis Vuitton’s lawyers, in the mid-90s the artist moved production of his tattooed pigs to China, where he founded an “Art Farm”. He explained his manipulation of pigs as an attempt to increase the animals’ value; his activity in general can be described in economic terms as an act of transformation of the use value of ordinary things into the exchange value of art.

Delvoye took this approach a step further, in the early 90s, in his explicitly scatological works, when he made mosaic tiles decorated with excrement. By the early 2000s, this interest peaked in design and construction of several cloaca mechanisms, the sole purpose of which was a precise replication of the human digestive process. The Cloaca series was exhibited in museums across the globe with much controversy, but also considerable success, as the artist was able to sell the products of his machine as artworks. At the same time, Delvoye embarked on the production of objects inspired by his love of Gothic style, such as models of chapels and stained-glass windows. Although some of his chapels look like rather typical symbols of the Gothic, the stained-glass windows feature x-rays made of people and their intimate acts, either digestive or sexual. The artist also applied patterns derived from the Gothic to real-size dumper trucks and other machines, such as bulldozers, casting them out of masterfully fashioned metal filigree, and making them look like fantastic medieval industrial skeletons or oversized Harry Potter toys.

The Gary Tatintsian gallery displays two relatively small models of these trucks and a real-size one. Relatively recently Delvoye abandoned thematic provocation in favour of a formal one: instead of producing and selling excrement, he distorts the form of his objects with such brilliance that their “straight” variants become erased by their more attractive “twisted” counterpart: it is no longer possible to imagine the original without comparing it to Delvoye’s version. The small truck models at Gary Tatintsian’s are so warped – one of them looks like a parallelogram slated in its longitudinal section, and the other is twisted along its horizontal axis. The exhibition also features several car tyres intricately carved with individual patterns and arranged in tasteful configurations. Finally, there are seven shiny oversized “rings” placed in a circle on the gallery floor. The reflection of light off the polished bronze and the curvature of the shapes make it difficult to discern the iconography of the pieces, but, on a closer look, it becomes clear that the curled up objects are actually giant crucifixes, complete with the figure of Christ, however deformed. In this exhibition, then, Delvoye remains faithful to the subversive core of his iconoclastic art. The gallery’s expansive exhibition space allows for an unimpeded exploration of the pieces, which is advantageous for Delvoye, who likes to play with scale to draw attention to the elaborate craftsmanship in his work.

The environment at the Pushkin Museum of Fine Arts differs completely from the new and starkly minimal space at Gary Tatintsian’s. Steeped in history and endowed with one of the best collections of western art in the world, the Pushkin Museum has much more at stake in showing subversive art. The artist also has more at stake: it is obviously more challenging to show in a place filled with masterpieces and, in Moscow especially, to confront a conservative public that either does not like, or feels threatened, by cutting-edge art.

The artist and the museum found a brilliant solution to the problem. More than 30 of Delvoye’s works are scattered through the collection on the first and second floors of the museum among the antique, medieval, Renaissance, Baroque, 17th- and 18th-century painting and sculpture. Whenever possible, they are displayed together with objects from a period that visually corresponds to the work’s borrowed pattern or style. Delvoye’s early decorative saw blades, for example, are inconspicuously placed inside a case containing 17th-century Dutch porcelain; his gas canisters painted in the manner of Greek vases appear among antique statuary; and his Gothic truck forms part of the medieval display. Sometimes, as with the Coccyx works, which reproduce the human coxal bones in differing materials and sizes, the objects are put on top of marble tables that match them in material and colour.

The creations attracting most attention are Delvoye’s sculptures, in which he attains the effect of a vigorous movement and dislocation by effectuating a twist along the object’s longest axis. In the Rococo room, for example, the artist’s custom-made Twisted Bust I and Twisted Bust II temporarily replaced Portrait of an Unknown Woman by French sculptor Jean-Baptiste Lemoyne. Made with the help of stereolithographic process, the busts recall their prototype only in the general contours and fleeting features of the subject’s face, the wholeness of perception being destroyed by a vigorous 360-degree turn – in one sculpture clockwise, the other counterclockwise. The same room contains Delvoye’s spiralled variation on Mathurin Moreau’s Daphnis and Chloé, made out of polished bronze, in which the figures of the lovers become almost indistinguishable in turns and twists of shiny metal.

The title of the Pushkin Museum exhibition throws light on Delvoye’s thinking process, because mimicry in the context of visual art is a complicated theoretical notion, which brings to mind Roger Caillois’s article on the subject and Georges Bataille’s ethnographic Surrealism. For these authors, mimicry is a basic biological drive of all organisms, including humans, aimed at physical appropriation of the environment in which they live in order to reproduce and die. Delvoye is considered a Neo-Conceptualist; in several interviews, he has remarked on his liking of artists, such as René Magritte for example, for whom ideas took priority over the perfection of painterly technique. It would not be surprising, then, if he were familiar not only with Caillois and Bataille, but also with Jacques Lacan’s definition of anamorphosis as a vision, which is based on the idea that there is a blind spot in every act of looking, which conceals the bodily character of visuality and depends on the desirous nature of vision as a sense. Simply put, we see what we are looking for, passing an image for objective reality without acknowledging its distortion by our own particular point of view. This distortion is what Delvoye attempts to materialise in his art.

The Pushkin Museum exhibited only one Cloaca piece from 2007 – an excrement-producing “travel kit” consisting of an open suitcase filled with a makeshift laboratory equipment that would be able to perform the task by relatively simple means at a moment’s notice. The piece is installed in the medieval and early Renaissance section of the museum, next to panels from Lorenzo Ghiberti’s Florence Baptistery doors. During my first visit, I could not find any inscription identifying or explaining Delvoye’s work. It was the only exhibit in a spacious hall without any explanatory text. During a subsequent visit a couple of days later, there was a label in place, identifying the artwork and describing the suitcase as a reference to Delvoye’s love of travel, and the equipment as “part of an absurd machine, which in fact produces nothing”. A curator explained that the previous label, which described the purpose of the machine more explicitly, needed to be removed, because of complaints from the public. Comments left by visitors were mostly positive or neutral, with a few that were openly hostile, attacking contemporary art in general as “primitive”. With Delvoye’s exhibition, the Pushkin Museum took the first tentative steps in introducing the broad Russian public to art that does not cater to public taste, but challenges and provokes. We can only hope that this trend continues. 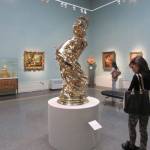 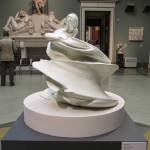 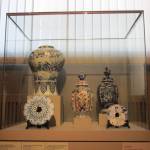 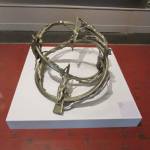 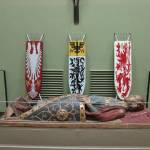 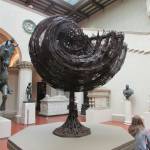 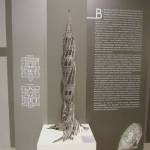 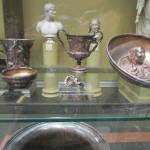 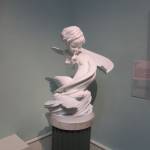 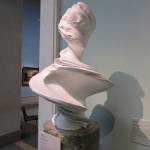 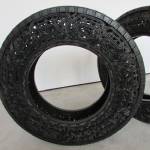 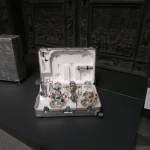 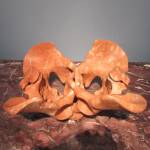 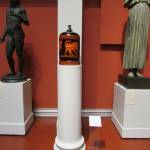 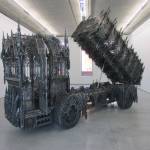 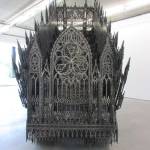