William S Burroughs: Can you all hear me?

William S Burroughs: Can you all hear me?

The October Gallery’s exhibition explores the legacy of novelist and artist William S Burroughs, and shows work by those he influenced, including Brion Gysin, Liliane Lijn, Genesis P-Orridge

A novelist, short-story writer, essayist, heroin addict and accidental killer of his second wife, Joan Vollmer, William S Burroughs II (1914-1997) was a key figure of the Beat Generation. Described in the 2003 Penguin Modern Classics edition of his semi-autobiographical novel Junky as “one of the most politically trenchant, culturally influential, and innovative artists of the 20th century,” his radical ways of thinking and passionate attempts to deconstruct control systems have profoundly influenced a great many artists in his wake, sending repercussions throughout popular culture and the visual arts, as well as the field of literature. Indeed, alongside his novels, novellas, collections of short stories and essays, Burroughs also collaborated on projects and recordings with numerous performers and musicians, made many appearances in films, and was himself a photographer, collagist and painter. During the last 15 years of his life, when he lived relatively peacefully in Lawrence, Kansas, near to where he grew up, he produced a large body of visual art, although this remains far less widely known than his written work.

While living in London in the late 60s and early 70s, Burroughs made strong connections with many noteworthy figures of the British art scene. The founders of the October Gallery worked with him from 1974, and in 1988 hosted his second solo exhibition, his first outside the US. It is fitting, therefore, that at the conclusion of the centenary of his birth, the gallery opened this exhibition of 25 of Burroughs’ visual works, displayed interwoven – collaged almost – with 15 works by artists he influenced.

The works by Burroughs are truly mixed media: collages, spray-paint pieces, ink and acrylic works, silkscreens, works which he shot through with revolvers and shotguns – perhaps a wry reference to his shooting of Vollmer, during a drunken game of William Tell, although, in artistic terms, more akin to Alberto Burri’s Combustione or Joan Miró’s burnt canvases. Then, freestanding in the middle of the gallery, is Space Door (1987), a wooden door, painted and collaged on both sides, and accompanied by an audio piece about how space is the only place left for humans to go and how it will be a natural transition, as it was from water to land, albeit requiring physiological and psychological changes.

Burroughs is famed for his adoption of Brion Gysin’s cut-up technique, which he first came across at the Beat Hotel in Paris in September 1959. Gysin (1916-86) had “rediscovered” this surrealist method while placing layers of newspapers as a mat to protect his tabletop. As he cut through the layers, he noticed that interesting juxtapositions of text and image often arose and so he began deliberately cutting the newspapers into sections and then randomly arranging them. Burroughs adopted this method in his writing, randomly splicing together phrases from various sources and inserting them into his own text. To him, it was an anti-narrative means. Burroughs also suggested that cut-ups may be effective as a form of divination, saying: “When you cut into the present the future leaks out.”

Liliane Lijn (b1939) met Burroughs and Gysin in Paris in the 60s. She was given a copy of the first book of cut-ups, Minutes to Go (1960), by Burroughs, Gysin, Sinclair Beiles and Gregory Corso, and this inspired her early use of text excerpts in her Poem Machines and Koans. Burroughs saw her first solo exhibition at La Librairie Anglaise, which included some early text works with words cut from the poems of Nazli Nour, and suggested that Lijn might use excerpts from his writings, since they both shared an interest in taking words off the page. In 2009, she created the work on display in this exhibition, Way Out is Way In, a three-metre tall column, made from used industrial drums, with the titular words drilled into them. The text is taken from Burroughs’ novel, The Naked Lunch, and the work is a homage to him. With the drums programmed to rotate at steadily increasing speeds, the words, lit from within, alternate between visibility and a blur of abstract light. This confusion brings to the fore Lijn’s belief that light and language are inextricably interconnected.

Cerith Wyn Evans (b1958) is another artist whose work uses language as a raw medium. The neon Elective Affinity (2010), accompanied by an audio recording, asks viewers: Look at that picture, how does it seem to you now… Does it seem to be persisting? The reference to time and persistence echoes Burroughs’ thoughts on divination. Wyn Evans was introduced to Burroughs through the performance artist and “cultural engineer”, Genesis Breyer P-Orridge (b1950), who h/erself adopted the cut-up technique and applied it to the body, creating a pandrogynous and deconstructed character, merging h/er identity with that of h/er (now sadly deceased) wife, Lady Jaye Breyer, through plastic surgery, hormone therapy, cross-dressing and altered behaviour. October Gallery is exhibiting a number of h/er mixed media collages and C-prints, strangely ritualistic with their cut-up and dismembered body parts, sexually suggestive, some almost pornographic. In Snoflakes DNA (Clouds) AP1 (2008), for example, cut-outs of the fictional pandrogyne self float in a dreamlike vision amid the clouds.

Finally, Shezad Dawood (b1974), whose film, paint and sculptural works juxtapose multiple narratives and discrete systems of image and language, is showing two acrylic on vintage textile pieces, layering up collage-style, with Egyptian imagery, bringing to mind hieroglyphs and the true meeting point of image and word. Dawood describes his works as a “cut-up essay” and admits that Burroughs’ ideas have never been far from his thinking.

All the works in this exhibition are linked by various chains of connection, in theme, method and media. The overarching concepts are those of deconstruction and the intersection of word and image. The juxtaposition of works by Burroughs himself, alongside his friend and contemporary Gysin, and younger artists in whose work his influence is apparent, offers not just a centennial homage to this polymath artist, whose visual works have been sadly overlooked, but also shows that, through his ideas, methods and influence, he lives on: by cutting into the present, the future continues to leak out. 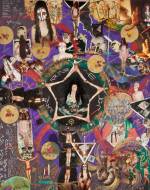 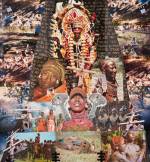 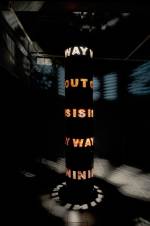 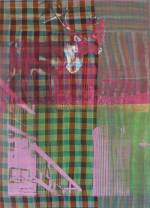 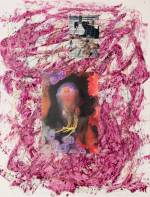 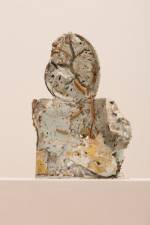 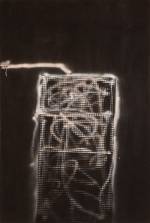