The news that four British architectural practices - Will Alsop, Norman Foster, Grimshaw and Aedas - have made it to the final four teams selected to produce 'signature' designs for Toronto's £1.4 billion Spadina subway extension underlines the high regard given to British architects in Canada. As Toronto Transit Commission chairman Adam Giambrone has said, his demand for exceptional design was directly influenced by European projects in cities like London, Madrid and Stockholm: 'Choosing the best architects working today will signal not only to the world, but to the people of Toronto, that this city cares about excellent public spaces and facilities.'

In Alsop's case, his selection may well have been influenced by his design (by Alsop Lyall & Stormer) of the North Greenwich station on London's new Jubilee Line, but it is hard not to believe that equally influential was Alsop's design of the Sharp Center for Design that is part of Ontario College of Art & Design's $42.4m redevelopment of its campus in downtown Toronto. Now known as 'The Tabletop,' Alsop's flying rectangle that houses the Sharp Centre floats (even though it is supported by 12 spindly and angled multicoloured stilts) nine storeys above the existing College of Art & Design – an undistinguished row of mainly 1950s and 60s brick buildings that have been likened to a postal sorting office. And, just as Gehry's Guggenheim Art Gallery marked the start of architectural renewal in Bilbao (and, arguably, the current love affair with iconic buildings), so The Tabletop is now performing the same role in Toronto.

As Richard Lacayo has noted in Time Magazine, nothing much had happened in Toronto since Viljo Revell completed his curvaceous City Hall some 40 years ago – apart from the cool and glossy condominium towers that can be seen in cities around the world. Now, however, Toronto has the addition to the Royal Ontario Museum by Daniel Libeskind and the just-completed remodelling of the Art Gallery of Ontario by Frank Gehry. And, as my opening paragraph suggests, there's much more to come.

The decision to redevelop Ontario College of Art & Design campus arose because of the increasing importance of its courses on graphics, advertising and illustration, as well as industrial and environmental design. With 3,000 students, the college was bursting at its seams. It had also, in 2002, been elevated to degree-giving status. However, the only space for expansion seemed to be a car park just south of the main studio building. As Vice President Peter Caldwell said, 'Everybody expected that we would just add another four- or five-storey building on that parking lot.' Had that been done, the occupants of mid-rise apartments on the opposite side of McCaul Street, along which the college buildings run, would have lost their views of the historic six acre Grange Park to the west of the college. Instead, by raising the new accommodation off the ground, so that it hovers above and beyond the college itself (the Sharp Center is the equivalent of 30 storeys in length), Alsop has preserved the views into the park and, indeed, linked the park more closely to McCaul Street.

Given the restrictions to the site and his consultations with the college and the people living in the area, Alsop took note of someone's suggestion that, to save the views of Grange Park, the new addition to the college could be lifted into the air. Alsop must have immediately remembered his time in Cedric Price's office and the revolutionary ideas about architecture that were generated there (as well as Price's connections to Buckminster Fuller). Alsop also remembered his training at the Architectural Association in London and Ron Herron of Archigram's drawings of The Walking City (one of which is currently on view in Cold War Modern at the Victoria & Albert Museum, London).

The result was a series of paintings in which Alsop explored the way in which a structure could be placed above the college buildings, together with some 20,000 early promotional postcards showing each side of the new structure painted in a different, vibrant colour – hot pink, bright blue, mustard yellow and so on – and more consultations and workshops where Alsop could 'challenge, interpret, interact and discuss the brief' with everyone involved. People in the neighbourhood were given crayons and invited to draw their own vision of the addition. And everyone in the college – from students and staff to its alumni – was asked to write stories about what they wanted the addition to look like. And, instead of Alsop's proposals being watered down by these committee-like consultations, he says that by comparison with what he has sometimes experienced elsewhere, the approval process in Toronto was almost painless.

What Alsop has created is a steel box clad in black and white aluminium panels that has window openings set on a grid pattern but at different heights. The box is apparently supported by the 12 spindly metal stilts, but, in fact much of the support for the two-storey extension, which is 9m high, 31m wide and 84m long, comes from the red diagonal concrete core that houses the elevator and emergency stair. This serves as the central focus point of the newly created entrance hall in the existing building, uniting the floors of that building at all levels.

As for the spindly legs, these are in fact segments of an oil pipeline that had to be ordered from a company in Pennsylvania and, because they were coated in thick grease, had then to be transported by rail to Florida so that the grease could be removed. It was replaced (back in Pennsylvania) by 15 coats of intumescent paint that, were a fire to break out, swells up to create a protective cushion around the steel so that it won't sag or fail for at least 90 minutes. The legs, arranged in pairs, sit on five caissons made of concrete and steel that extend into the bedrock and are designed to withstand earthquakes.

Given the originality and excitement of The Tabletop’s exterior, it has to be admitted that its interior may come as a disappointment. The most interesting space is the main lobby, which has a three-storey high curtain wall glazed with alternating clear, translucent and coloured glass. The lobby is, in fact, a huge concrete monolith that is the circulation core providing access to the Sharp Center and is also intended to serve as a surface for projected images that can be seen through the curtain wall. However, there is one feature that is as inventive as the 12 angled stilts outside: the structural hollow steel sections that are perforated to double as HVAC distribution ducts.

One level up and the lobby expands into the Great Hall, a two-storey public gathering space that occupies a former exterior courtyard and provides intimate views, at ground level, of Grange Park to the west. This space, though spare, is marked by a large, red ‘X’ cut into the ceiling (one of several) that recalls Suprematist compositions by Malevich. There is also a playful pattern of blobs also inscribed into the ceiling that are lit by magenta neon. The blobs are a reminder of the playfulness of the building’s exterior.

What the interior of The Tabletop lacks is any connection to the sky, or to views around it or, for that matter, any sense of the building being off the ground.   Indeed, its interior space of 8,350 sq m was originally intended to feature large, open plan studios, with other more translucent links to the earlier college building prevented on grounds of security.   Instead, The Tabletop has become densely packed with compartmentalised programme spaces that contradict any expression of the larger, architectural gesture. The exceptions are the open studios on each floor that span the entire width of the building, providing views through perimeter windows and brightly-coloured heads, sills and jambs that are deep enough to serve as alcove seating. Such provision is reminiscent of the alcove seating that Mackintosh provided along the Hen Run in Glasgow School of Art.

From the outside, the black and white pixellated exterior of The Tabletop blurs the scale of the building so, as Mr Caldwell says, ‘when you look at it from two or three blocks away, you’re not really sure: is it a one-storey, two-storey or three-storey structure?’  And in daytime, the windows blend in to become part of the spot-scape of the rest of the building, while at night the underneath of The Tabletop is illuminated by 16 large metal halide lamps that make the building as fascinating to look at as it is during the day.

The cost of the Sharp Center for Design was $19.5m and it was designed by Alsop
Architects in conjunction with Robbie/Young+Wright Architects of Toronto.

There are two other Alsop projects in Toronto: a sales pavilion for a condominium developer and Filmport, the flagship building for a film studio complex near the waterfront. Working with local firms, both Alsop and Aedas will design two of Toronto’s new subway stations, while Grimshaw and Foster will design one station each. The Spadina extension is due to be completed in 2015. 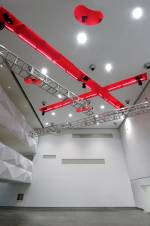 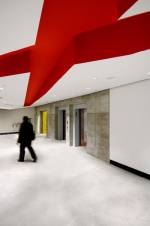 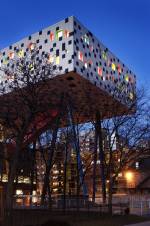