The fifth edition of the Bi-City Biennale of Urbanism/Architecture (UABB), Urban Borders, opened on 6 December in the city of Shenzhen, and 11 December in Hong Kong in its fourth edition.

UABB claims to be the only biennial that focuses exclusively on the subject of urbanism and urbanisation so it seems particularly appropriate that it takes place in two of the world’s most bustling cities, with their historically fraught issues of borders and integration, their opposing worldviews. A separate exhibition, but based on the same theme, Hong Kong’s presentation is called Beyond the Urban Edge: The Ideal City?, and its chief curator is Colin Fournier, a visiting professor at the Chinese University of Hong Kong. Shenzhen, however, has always been the more ambitious enterprise and this year is no exception. Dutch curator Ole Bouman, the former director of the Netherlands Architecture Institute, is this Shenzhen’s creative director, joined by Li Xiangning (Tongji University) and Jeffrey Johnson (Columbia University) as its academic directors; all three have participated in the Shenzhen biennale before.

As often noted with wonder, Shenzhen, an obscure fishing village until the early 1970s, has grown in under four decades into a sprawling megalopolis of 15 million people. As China’s first special economic zone, it has been governed since 1979 by much more elastic foreign investment policies than most of the country, an experiment in private enterprise and global capitalism. A flourishing port city that is almost twice the size of New York, it bristles with cranes and flaunts a soaring skyline created at warp speed by an impressive roster of local and international architects, a proud, if erratic example of Chinese modernity. This year, the Shenzhen biennale was installed at Shekou, a still gritty industrial area at the edge of the city, anchored by a crowded ferry terminal that routes passengers to Hong Kong, Macau and the Hong Kong international airport.

Urban Borders is divided not only into two curatorial teams, but is concentrated in two locations, linked by a new road, encompassing well over 12 hectares, called Venue A and B, owned by the state-controlled China Merchants Shenzhen Industrial Zone Co Ltd, one of the largest stakeholders in the region and a major sponsor of the exhibition, investing approximately US$9m (£5.5m) in the project, the first stage, it seems, of its master plan for the redevelopment of the area, a model on display in Venue B with OMA (Office for Metropolitan Architecture) commissioned to build a series of towers between the two venues.

Venue A was Bouman’s domain, the colossal site of the former Guangdong float glass factory, one of the first industries in the region and the largest manufacturer of curtain-wall glass from 1987 until it closed in 2009, the plant abandoned. Miraculously whipped into shape in less than nine months, the actual construction started only in July, although evidently more than enough time by Shenzhen’s startling standards, once boasting a skyscraper a day. Bouman, shifting “the buildings from background to foreground”, considers the site to be the exhibition, one he believes is of historic importance in the modernisation of China and worthy of preservation. Designed by 15 young architects, the fortress-like complex was divided into sections: the main entrance area with a new glass-box restaurant floating above an old concrete building; a gigantic Machine Hall (around four hectares) reminiscent of the Tate Modern’s Turbine Hall, surrounded by a wide upper galley that edged the great central void that led to smaller spaces for galleries, studios and workshops; huge silos left hauntingly empty for the most part; storage structures turned into a bookstore, cafe, pop-up radio station, salon; and a sustainable garden inspired by Hong Kong rooftop farms and street markets. Then there are the architectural details Bouman pointed out – a stately recessional of doorways through the silos, the glass-covered rectangular openings in the floor with their vertiginous multistorey views; a seemingly endless descent down a spiral ramp that is a cross between Frank Lloyd Wright and Piranesi; a projecting wooden platform high atop the silos that offers a panoramic view of the Pearl River Delta, Shekou’s container terminal and the district’s ongoing, triumphal development. When seen at night, the outdoor mega-sized video screen ablaze in shifting colours, its buildings brilliantly lighted, it is even more spectacular – surreal even. Bouman believes the complex will have a longer active life than usual biennial zones since so much has been invested in its buildings and infrastructure. He hopes it will be used as a “special cultural zone,” as he put it, “no longer an industrial site, but a Value Factory,” the biennale programme a preview of what it could be used for, including a public facility for creative media and the film industry, as Johnson speculated.

A number of institutions, such as the Musuem of Modern Art (New York), the Victoria and Albert Museum (London), MAXXI (Rome), the Massachusetts Institute of Technology, Columbia University, the Berlage Institute and Droog (the Netherlands), were asked to participate as “first residents” in the Value Factory, which Bouman hopes they would henceforth use as their “address” in Shenzhen. Of all of the presenters interpreting the biennial’s very broad theme, the V&A’s Rapid Response Collecting show, essentially one long table, offered one of the most accessible and popular. Based on ordinary objects from Shenzhen selected by curators, architects and designers familiar with the city, the display included metal-detector-proof bras for women labourers so they would be spared intrusive searches at their workplaces, a fake Van Gogh painting from Dafen Village, where famous artworks are copied by talented artists, knock-off iPhones, and rolls of stickers that lend authenticity to imitation products, underscoring China’s nimble (and notorious) shanzhai culture of pirating brands.

At Venue B next to the ferry terminal, Li and Johnson took over a spacious 1984 warehouse that was also rehabilitated, christening it the Border Warehouse. It housed approximately 70 diverse projects from 20 countries broken down into sections that further examined the central theme from several perspectives: a historic review and timeline of urbanisation, an interpretation of these projects and specific city studies; case studies on what constitutes urban borders; the sociology of urban borders; exploring contemporary proposals for an urban-rural nexus; eight national pavilions (Belgium, Canada, Italy, Mexico, Spain, Sweden, UK, US) and Macau, like those at Venice, introduced at the last Shenzhen biennale; and a video programme that documents both fancifully and straightforwardly the idea and reality of margins and the centre. Li and Johnson’s exhibition discusses the changing definitions of borders from the abstract to the concrete in ways that were often visually appealing, not merely diagrammatic and overly text-based, the models pragmatic, poetic, political or amusing, such as the accordion-pleated, expandable Tricycle House and Tricycle Park, the former a cunningly conceived, pedal-powered, environmentally gentle RV, its subtext the fact that land cannot be privately owned in China. There is also a structure made entirely of hard hats, a nod, it is hoped, to the skills of construction workers. Ma Yasong of MAD Architects’ Shanshui (mountain, water) Experiment Complex for Nanjing’s Zendai Thumb Plaza, scheduled for completion in 2017, is a futuristic looking model inspired by traditional Chinese concepts of nature, the organic contours of the buildings rising like white ghosts set into a landscape evoking that of traditional Chinese paintings. Village Mountains by architect Zhang Ke are a trio of illuminated pillars that suggest the idiosyncratic mountain pinnacles characteristic of classic Chinese art, both alternatives to the modernist concept of the city as machine. Architect Srdjan Jovanovic Weiss’s Hilltopia imagines an urban reclamation for North Philadelphia neighbourhoods that is also more natural, using earth as a structural material, its profile low, not skyscraping. Another project, called Shrinking Cities, documents the contraction of 400 large cities such as Detroit, Manchester/Liverpool, Ivanova (Russian Federation) and Halle/Leipzig over the last six years due to suburbanisation, deindustrialisation, post-socialist change, or all three. Architect Daan Roggeveen and journalist Michiel Hulshof’s photo essay Go West: Africa demonstrates how China’s urban models are influencing African cities. Chen Zetao of FCHA, a Shenzhen architectural firm, proposed in Cities between Cities some striking, innovative designs that address the many quotidian interactions and collisions between Hong Kong and Shenzhen, a thoughtful reflection on the current and future realities of cross-border living.

One question always comes to mind: do these biennales support urban culture in a meaningful way? Can they be more pro-active and responsible, wielding the power of the arts in significant, humanistic ways, not merely as trophy partners of Big Money? OCT-LOFT (Overseas Chinese Town, funded in large part by diaspora investment) was the site of the 2011 biennale curated by Terence Riley. It is now thoroughly made over, a glossy cultural district reminiscent of Beijing’s 798 Art Zone, ringed by expensive residential towers, a formula repeated in cities around the world, including the current wholesale gentrification of the crumbling factory districts of Hong Kong and a model for what Shekou’s future might be. Bouman said that a biennale “should be a catalyst for real change”, certainly a commendable aspiration. Let us hope, then, for real change, not merely the regeneration of derelict spaces for the wealthy. Rather, a much wider swath of the public should benefit, so it is not yet again a tale of two cities, of cities within cities with their own intractable borders. 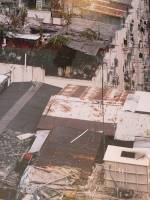