“It’s almost miraculous coming back to London as an artist with a whole body of work,” Tolon exclaims. “Most of this work left my studio 35 years ago.” Tolon was born in Istanbul and raised in France, and her career is both multicultural (France, England, Scotland, Germany and the US) and multidisciplinary (fine art and architecture). In conversation with American curator and writer Constance Lewallen, Tolon explains: “Home is a state of mind because it is something that you fabricate … language and origins … become part of us only later, when we adopt them, when we must learn how to function in a specific culture.1

Tolon first worked as an architect and used every material to hand, making artwork “on the side”.2 At this time she discovered a particular type of drawing surface, Mylar. Mylar is a non-absorbent polyester plastic sheeting, unlike paper, in to which drawing materials become embedded: marks made on Mylar float on top of the surface. Mylar’s natural resistance conjures a visual layering, mimicking printing and photographic processes. This mimicry results in some intriguing imagery; a series of Untitled 1999 black oil paint on Mylar (36 x 28cm) appear on first – and even second – glance to be perspective photographic studies, of details of industrial machinery and environments.

“Space is my primary interest,” Tolon tells Ardalan. “These are not spaces that can be inhabited.” Tolon mentions Piranesi, the Italian architect, designer and printmaker. In his strongly contrasting black-and-white prints of fictitious spaces, Tolon explains: “He played with scale.” It is clear that Piranesi has informed Tolon’s imagery. Her works do conjure unreal space, sometimes hauntingly, and perhaps her adept transformation of materials – the scraping, smoothing and trickery of the hand mimicking the machine – also reference some of Gerhard Richter’s paintings of photographs. Significantly, in a contemporary context, Tolon’s drawings of invented environments bring into play a subtle subversion, both of our current digital culture and of the fine art theatre. That the hand so effectively copies the machine might suggest a small revolution, not so much from a regressive position – but perhaps from one that prefers us towards the haptic experience in order to retrieve some physical grounding in our lives.

Tolon has employed just such physical and elemental materials in her larger works on canvas. These (so the gallery assistant advised me) were made on her rooftop in San Francisco. “The weather reports are encapsulated in the paintings.”2 Leaving the canvas on the roof while placing pieces of iron, pigment and other detritus across the surfaces, Tolon took note of the weather reports in order to manage the imagery, while also allowing chance to play a part in the end result. The canvases are stained with rust and pigments – rained on, blown over, marked torn and glazed (sometimes up to 80 layers), resulting in glass-like surfaces from which a backlit glow seems to emanate.

In a small room off the main gallery, in contrast to these luscious weathered surfaces is Tolon’s installation Time After Time (echoing a song from the 1980s3), which wraps the viewer in a monotone. The repeated scrapes, smudges and dragged marks resonate with numerous possibilities. Are we inside a musical score? Is this a very long digital printout? Are the horizontal shapes graphic renditions of cityscapes, geological strata, or perhaps runic inscriptions? “I’d like to think that I can stand in more than one place, that I can look and try to understand things from more than one angle, from several directions.”4 As Tolon takes a multiple view of her world, so she gives us, her audience, the opportunity of multiple interpretations, and a richly layered visual experience. 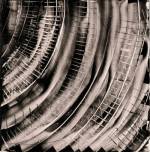