The quintessentially American artist Wayne Thiebaud is now 96 years old, and this impressive exhibition shows an array of his still lifes, portraits and landscapes from across the seven decades of his career 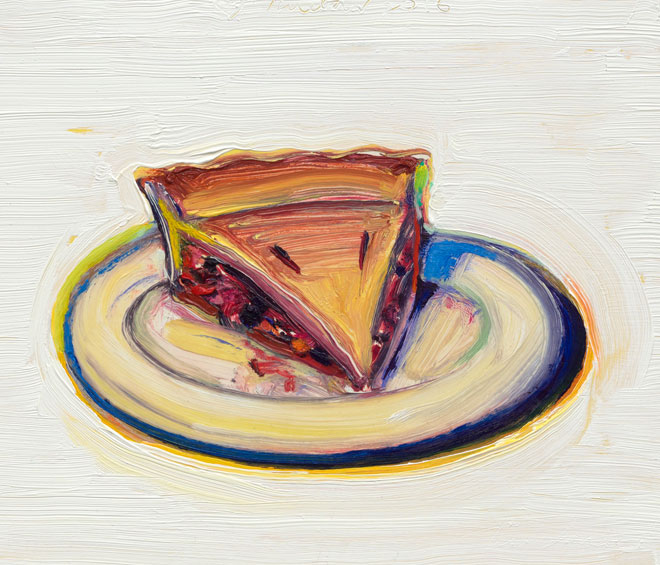 A pair of iced doughnuts and a cup of coffee in a thick ceramic mug: what could be more American? Rounding off a fine season of modern American art, which has seen stellar exhibitions at the Royal Academy and the British Museum, White Cube presents a retrospective of the works of Wayne Thiebaud, considered one of the US’s greatest living painters and whose work has been shown all-too infrequently this side of the Atlantic in recent decades. 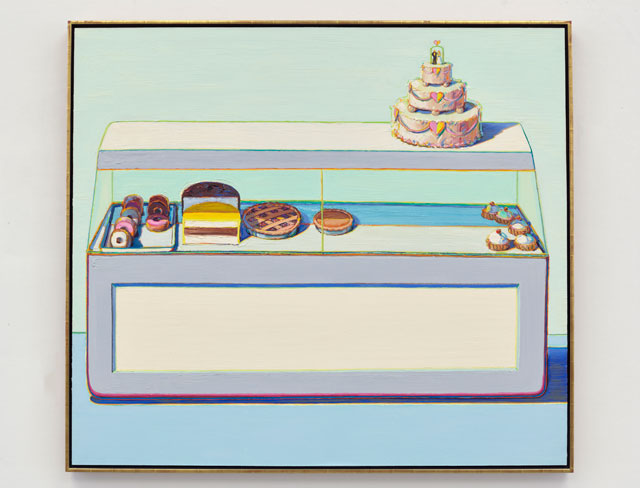 The subjects of his pictures – cakes, ice-cream cones and sweet dispensers – prompt many to consider Thiebaud as a pop artist, but his quiet, ambivalent explorations of Americana are more reminiscent of Edward Hopper. Thiebaud, who was born in 1920 in Mesa, Arizona, began painting his still-lifes as early as 1953, very much in the heyday of abstract expressionism, making him an early trailblazer of the nascent pop style. However, as this exhibition attests, Thiebaud’s oeuvre extends well beyond the patisseries of middle America; on display is an impressive array of landscapes and portraits as well as still lifes from across the seven decades of his career. 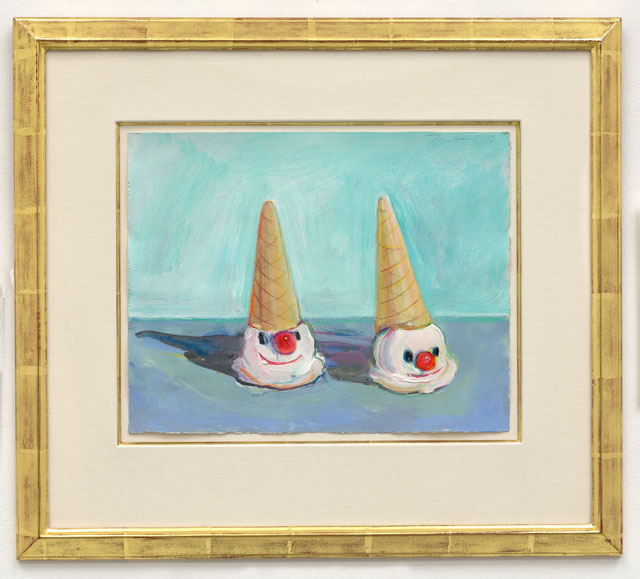 Born in Arizona in 1920, Thiebaud grew up in Long Beach, California, and has lived and worked in Sacramento for much of his adult life. His early ambition was to become a commercial artist, and, as a youth, he briefly worked for the Walt Disney Company as an “in-betweener”, drawing transitional steps of a character’s movement between the primary frames. It is easy to see this grounding in his later output, with its emphasis on strong, clean shapes, high contrast borders and well-defined shadows.

What this exhibition makes clear is not simply Thiebaud’s longevity, with works on show dating from 1962 to 2017, but the sustained quality, experimentation and sense of play in his output. Clown Cones (2000), an acrylic and gouache work on paper depicting squashed ice-cream cones, grins cheekily at the nearby Cherry Topped Desserts (1986), inevitably suggesting nipples. Two Paint Cans (1987) hangs near the entrance as if to greet visitors with a knowing, self-referential wink. Portraits from the 60s hang next to still lifes and landscapes from 2017. Noting the dates of these works is a constant surprise – one gets the sense of an artist in motion, for ever revisiting his favourite subjects with little in tow aside from his own extraordinary interior world of light and colour. 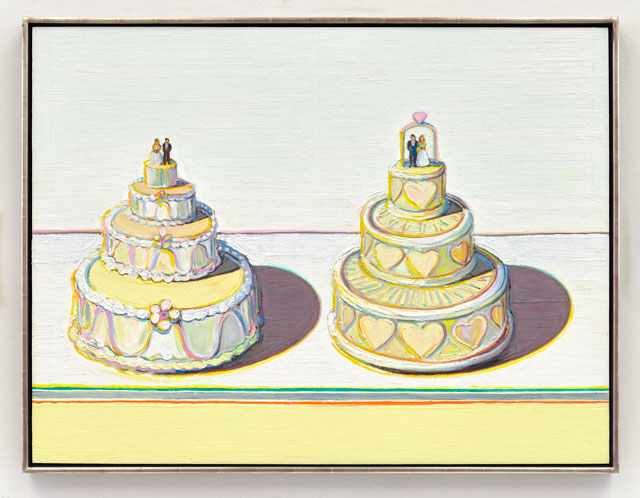 The ground floor gallery is dominated by the kinds of sumptuous dessert-themed still lifes that have come to define Thiebaud’s style. Bakery Case (1996) presents us with a delectable array of doughnuts, cakes, tarts and pies, while bookending the room is Two Wedding Cakes (2015), a riot of flowers, hearts and miniature figurines in creamy whites, rose pinks and maroon shadows. These are paintings that reward, if not require, close attention: the icing on Thiebaud’s cupcakes rising off the canvas in light, stiff peaks; the shiny, vertical brushstrokes of a green wine bottle; the thick, gummy brown of a hamburger patty. Thiebaud terms his technique “object transference” and is keenly aware of the transformative potential of paint to mimic the physical properties of the represented object. These vivid, saccharine colours, crowns of whipped white paint and sharp pools of shadow combine to make these pictures tempting and tactile. 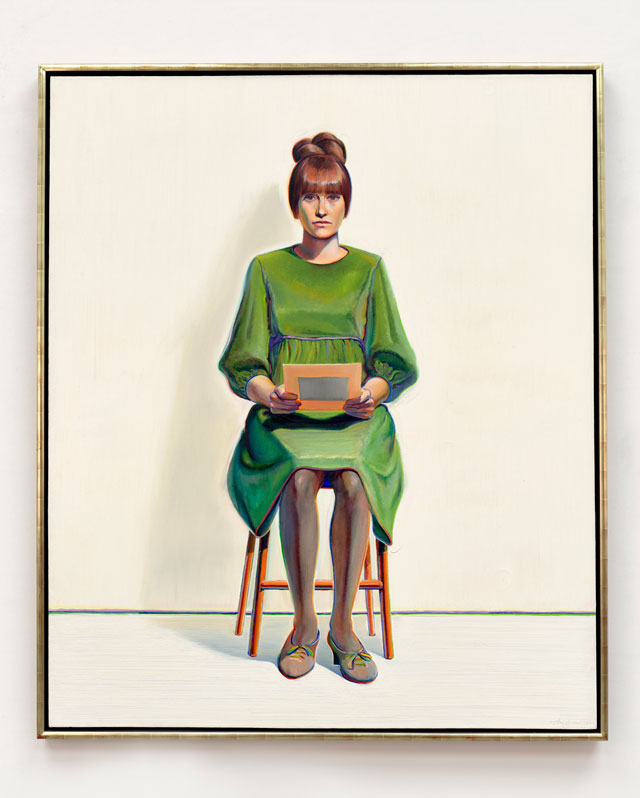 Downstairs, attention is immediately seized by Green Dress (1966/2017), a large full-view portrait of a woman looking up, as if reacting to the paper held in her hand. Her gaze, arresting at a distance, draws you closer and, as you approach, you begin to notice the glowing, electrified edges encasing the subject, one of Thiebaud’s trademark styles. These borders highlight the delicacy with which he organises his colour palettes into a considered harmony: the dress finds an echo in the emerald light tracing her cheekbone; the stool’s harsh orange is traced along the hem of the dress up to the shadowed rim of the letter. Elsewhere, we see wedding cakes traced with the butterscotch yellow of their display unit, we see the circular plate in Coffee and Donuts (2014) subtly outlined against a background of lateral brushstrokes. These embellishments grant each picture a sense of composed perfection and quiet unreality: subject and background are both in harmony and at tension, the subject at once embossed out from and enveloped within its background.

Thiebaud’s remarkable landscapes show this same vernacular of imaginative exaggeration in form and colour. Often viewed from an aerial vantage, they are sky-less compositions, the land filling the frame in a gorgeous vista of rural Americana. Y River (1998) and River Cloud (2002) are placid, pastel candy-cane compositions, cotton-bud clouds and orchards resembling matchstick heads. Elsewhere, in Fall Fields (2017), Thiebaud’s palette is more outlandish, a rotunda of maroon and teal offset by a sky-blue lake and flaming-orange tree, while in Intersection Buildings (2000-14) Thiebaud tips his hat to San Francisco with a narrow vista of impossibly steep urban hills. To visit this exhibition is to enter into Thiebaud’s remarkable world of luminous colours and dream-like vistas. These crisp, uplifting works form a considered and engaging survey of this significant and quintessentially American artist. 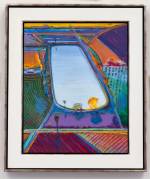