Almost everyone now is immersed in social media. The co-existing tools of social media, such as Instagram, Facebook, Twitter, WordPress, have opened multitudes of doors for women to publicly address sociopolitical and personal issues – think of the #MeToo debate. This growing social phenomenon has been labelled the fourth wave of feminism. While some women use social media to showcase their optimised, photographically tweaked, bodies and faces, some female artists are using those same platforms to criticise the phenomenon of virtually stereotyped, fetishised and pornographic female bodies. Some of those on both sides partially finance themselves by camouflaged advertising: through the marketing of either their lifestyle or their critical engagement with the “mainstream” cloud through artistic work. The aesthetic ways and means this technological advancement provides for female artists, and its implications for the blurred realms of the private and personal, are explored in the Virtual Normality: Women Net Artists 2.0 exhibition at the Museum der Bildenden Künste in Leipzig. 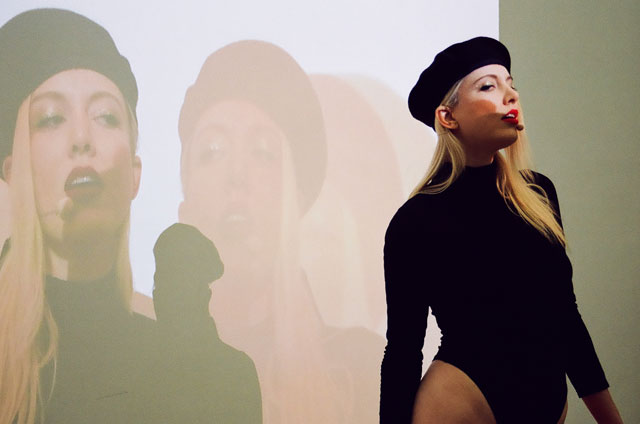 The show, curated by Sabrina Steinek and Anika Meier, shifts the discourse from print advertisements and female multimedia art exhibitions – such as the monumental show WACK! Art and the Feminist Revolution (2007), which looked at the legacy of art made from 1965-80 under the influence of feminism – towards the realm of the internet to examine and expose the current virtual self-representation of women online. The 11 international artists featured in the show are all in their mid-20s or 30s, and some of them started to create their artistic new media characters while still in art education.

New York-based artist Leah Schrager (leahschrager.com) is a former model who now considers herself an “Instagram model”. She began studying photography when realising that she did not own the photos of her body. Her exhibited works are photographs, accessible on Instagram @LeahSchrager, which are part of her Infinity Selfie (SFSM, Safe for Social Media, III, 2016) series. They allude to issues of censorship on social media in a innocent, playful manner, and at the same time question how close one can get to a picture without being able to see what is being depicted. This leaves the female and male gaze unsatisfied. But Schrager’s work is not just concerned with issues of such (self-) censorship.

Her second internet persona, Ona (@OnaArtist), has 1.5 million followers on Instagram. And that is not surprising. Although she does not expose her entire nude body on either of her Instagram platforms, Ona’s account showcases pornographic, sexually provocative images of herself in a more skilful manner; and I cannot help but think of the American TV-series The Girlfriend Experience when looking at these images. In the first season of the TV series, a second-year law student starts offering escort and sex services while interning at a law firm. When her employees (including her boss, with whom she is sexually involved) receive an email with a sex video of her, she ends her internship much earlier than initially intended. Taking time away from her everyday environment, she is then prompted to offer online sex services only for a while. It is this coming together of two parallel worlds, of two professions within one character, as well as of the virtual and “normal” (whatever this means) world, that the exhibited works in Virtual Normality work through.

Brooklyn-based artist Molly Soda’s sound-video installations show her in her private spaces, acting in a casual manner in front of her virtual audience. In That’s Me in the Corner (2017), she sings along with pop music numbers for about 30 minutes. We can see that the live audience on Instagram is watching her, but whether she watches the audience, is not clear as she continues to look straight ahead, smiling from time to time. In All I Have is My Phone (2016), Soda reads on her mobile, while lying in her bed under the duvet. In Exile in Camville (2017), we see a moving image matrix made up of 20 single, but loosely connected, film sequences of her doing different things in her bedroom, which is lit in reds, pinks and blues. As in her other two works, there is no peak, we are viewing her self-consciously performing mundane activities. Watching her film work at the museum makes clear that we are being taken into her acting-out mind, allowed to watch her, apparently doing nothing.

Two other remarkable works in this technology-focused show are Brooklyn-based Nicole Ruggiero’s No ESC and Virtual Reality Game (2017). The first is an installation that takes you into a chaotic, pink-lit bedroom. There are posters on the walls, the space is packed with furniture, food and bottles are spread out on the floor, and there are several IT gadgets. Alongside the physical room, the show presents Ruggiero’s virtual reality game (nicoleruggiero.com/project/no-esc), which places you in the same room and allows you to interact with all the objects, picking them up, dropping them, and so on. Gamers wearing virtual reality headsets decide what happens, and people standing next to it can follow each move on a digital screen. But whatever the gamers do, the radio keeps on playing pop songs and the phone keeps on vibrating, creating a ghastly noise each time a new chat message is received. The rhythm of this sound cloud increases and becomes more maddening. Ruggiero’s experimental and disturbing approach attempts to bring the virtual and the physical world closer together through the participation of her audience. But instead of artistically merging what her work tries to overcome – namely, the barriers between these two realms – it appears as if she further separates them by displaying the physical room next to its virtual-participatory version. 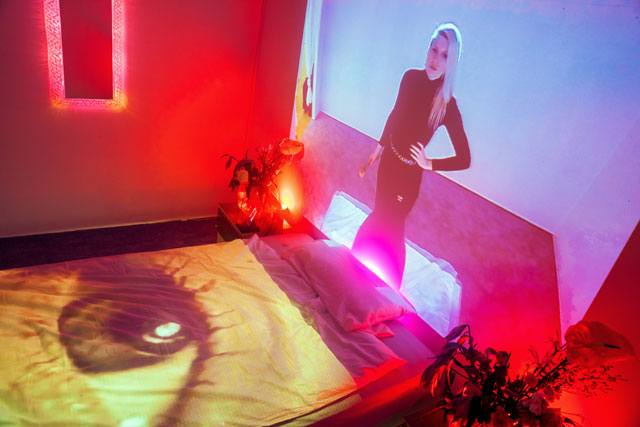 The work of Arizona-born Signe Pierce, in contrast, follows a different strategy. Her room-filling installation Big Sister’s Lair (2018) questions the impact of the virtual world on the physical by alluding to George Orwell’s 1984. A webcam projects an image of the viewer on to the wall behind the top end of the bed in a room lit in neon pink, while a digitally filmed version of Pierce talking is visible on a smartphone screen and wants to be heard speaking to you from underneath a glass bell jar. However, it is not the interactive installation that makes Pierce’s work memorable, but the fact that she is often scantily clad during her performance. At the opening of the exhibition, which was live streamed on the museum’s channel, Pierce’s zestful performance filled the whole exhibition with a provocative and loud energy, radiating out to her virtual audience.

Other artists in this show do not shout as loudly as Pierce, but still address sociopolitical issues. The African-American artist Nakeya Brown, for example, whose photographs depict images of long black hair against pastel-coloured backgrounds, unlike Pierce, does not associate herself with the notion of feminism. This goes back to her belief that white feminism has suppressed women of colour. Her work, she says, “speaks to black women about the politics of our bodies and the formation of our identities”. In this show, it is her statement rather than her visuals that provoke a rethinking of what kind of viewers her works address.

Stephanie Sarley’s food porn work further underlines the question regarding the audience’s gaze. On Instagram, the Oakland artist filmed her hand gently massaging, squeezing and boring into the flesh of fruit, or pouring honey and milk over it. Her association of different (self-)masturbation techniques tested with various fruits not only alludes to the tradition of representing food as still life, but also renders it female. The works, which she stages and performs, demand an examination of whose gaze is hitting what: are men and women looking at her work differently? Are men and women observing the artist herself performing arousing activities with food, or, do such gazes principally gawk at unanimated, sexed fruit?

Besides questioning who is looking and what is being looked at, Sarley’s pornographic work educates and therefore resonates with novelist Siri Hustvedt’s thoughts on the contemporary state of pornography. According to the American writer, as pornographic images have become much more easily accessible on the internet: “Most young people today have seen images of people having sex before they themselves ever have it. Pornography has changed the meaning of ‘sex education’, and this fact induces fear in many.”1

On the whole, the artists presented in Virtual Normality, including the others whom I do not have space to mention in detail (Arvida Byström, Juno Calypso, LaTurbo Avedon, Izumi Miyazaki and the Berlin-based collective Refrakt), are concerned with the impact the content uploaded on social media has on our everyday lives, and how their self-representations fit into that wider virtual picture. The exhibition tackles this phenomenon from an insider’s point of view as the curators and the artists needed to know the operations of the virtual world well in order to transfer the concerns the virtual world poses into a museum space. The feminine style of the exhibition itself does not only display intimate pictures that visualise the working methods of these young female artists, but also convincingly frames them within the walls of the museum.

Reference
1. Sontag on Smut: Fifty Years Later. In: A Woman Looking at Men Looking at Women: Eassays on Art, Sex and the Mind by Siri Hustvedt, published by Sceptre, 2017, page 67.