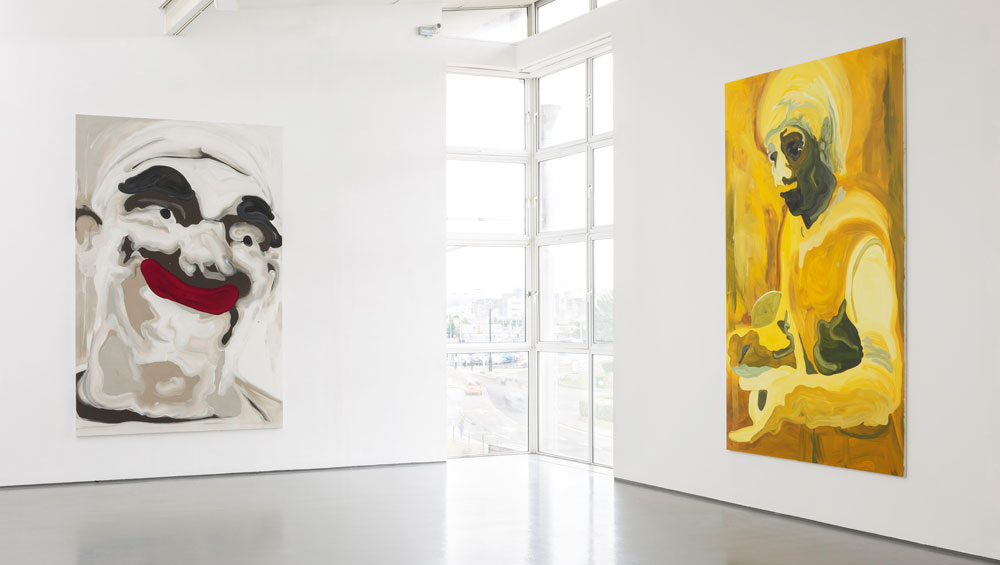 Filling the two galleries of the Dundee Contemporary Arts centre, Clare Woods’ latest work is immediately compelling. In the first gallery, Our Local Hero (2017) catches the icy summer light; seeming at first like the portrait of a clown with smudged makeup, it is at once garish, terrifying, and hypnotic. On its right there is another of the large aluminium sheets, this one painted in shades of yellow – She Town (2016). While the subject matter is never clear in Woods’ work, as becomes more obvious as I walk around the exhibition further, this one looks like a breastfeeding mother. My toddler son seems to think this, too, becoming mesmerised by it – gleeful with the recognition of a subject that clearly means a lot to him.

With the other paintings, my son’s descriptions of the dominant colour of each one are about as far as I get, too: one of the aluminium sheets is painted in pinks, another in blues and another in greens, as he points out. This is, initially, what is most striking about them – this rainbow of curved shapes. While we are told that each painting is created from a single source image, whether a photo taken from a magazine or a printout from the internet, these original images are obscured and manipulated to the point where that origin is unclear. My son is content to keep pointing out the single colours that tend to dominate the vast paintings, while I take a closer look, compelled by the concealed forms to know more.

Large, curved brushstrokes break up the various shades of green used in Uncle Denver (2016) and English Murder (2017), which are side by side in the second room. In the first painting, I can discern what seem (to me) to be limbs, as well as a long road and a window frame. In the second image, which uses similar shades of green and yellow, I cannot connect the title with what I see, which seems at turns to resemble a dark pond and a cradled baby. There is the feeling that these paintings are Rorschach tests, inviting the viewer to project, as much as investigate. Indeed, the viewing experience becomes almost forensic – an attempt to put together ambiguous pieces (are they limbs or pond matter?) in order to understand the concealed, evasive subject. 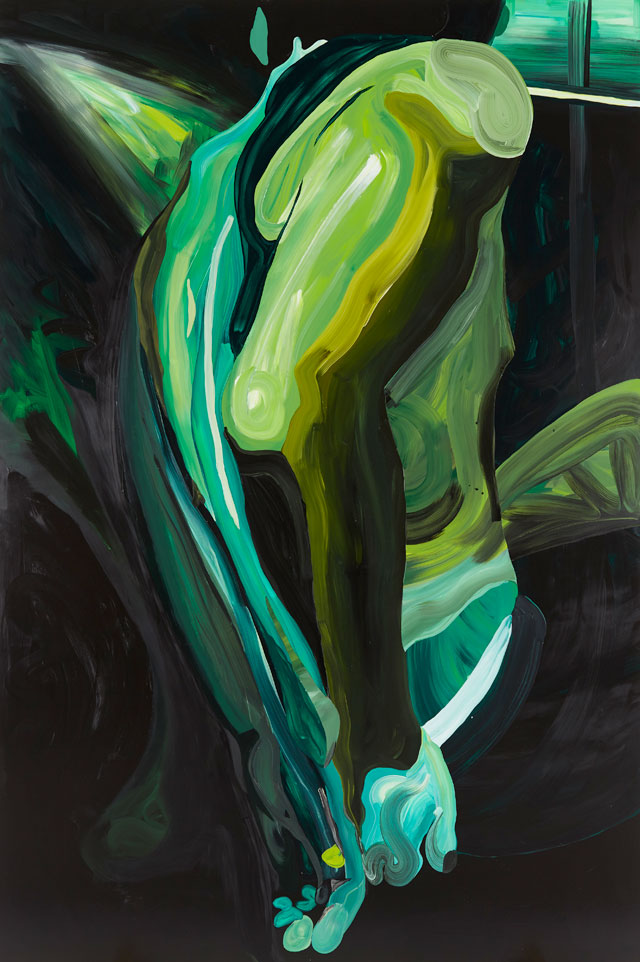 The closer I look, the more eerie and sinister the paintings seem. As Woods has explained, the original images from which these depictions develop often show people in vulnerable states, whether naked, hooded or alone in a desolate, hostile landscape. They are people whom we can barely grasp, people who are escaping capture or reunion. That ambiguous atmosphere begins to pervade the space and invites further reflection on that state of mind. Moreover, it puts us into the role of the person who is following and investigating these other people.

This can feel uncomfortable. Why are we chasing someone who does not want to be found? What is the purpose of finding unrecognisable bodies? While there are many possible interpretations of these images, my thoughts dwell on the media culture that seems to linger here – the internet images of missing people and terrorist attack victims and perpetrators, from which these paintings draw their ambiguous shapes, and the obsession with looking at them that they seem to hint at. When I read more about Woods’ explanation of the paintings, it seems that my reaction is intended. As Woods states: “The source material used for my paintings acts as a catalyst to bring the unconscious or hidden to the surface. The unseen internal anxiety is transformed through the painting process into something I can deal with; it has a form and a presence. It stops being unconscious once it has been translated into paint; it’s real, it’s tangible, I can fight with it while I paint.”

That “fighting” is evident here, and Woods’ subversive deconstruction of difficult images seems an appropriate and clever way of dealing with the subject matter; she comments on it without giving in to the typical tendency to sensationalise it merely by repeating it. In so doing, Woods finds the humanity that lingers in these images alongside hints of brutal inhumanity. In painting with such ambiguity, both visual and moral, she gives a privacy and profundity to her subject matter, refusing to pin anyone or anything down to a single easy projection. As a result, there is a feeling of real compassion, and loneliness. The “unseen anxiety” is, as she says, dealt with; the process of looking at the paintings, therefore, becomes cathartic, too. 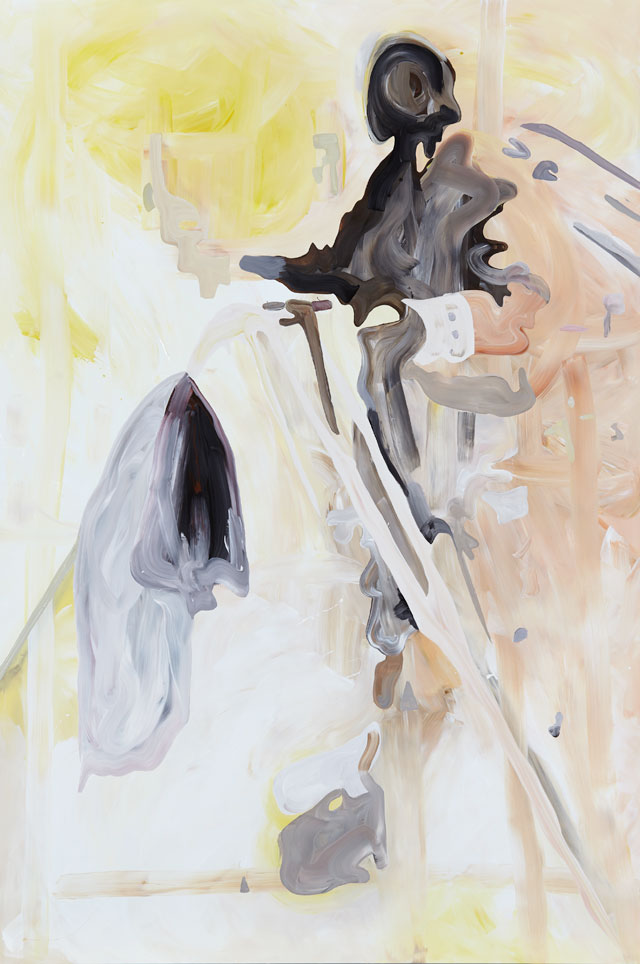 And while there are certainly negative connotations to be found in these paintings, that catharsis chimes with a liberating strand of thought also inspired here. One of the last paintings I see, Strike (2017), draws from a photograph taken by the explorer Robert Falcon Scott. The photograph shows the outline of one of his crew in a snowstorm during the British National Antarctic Expedition of 1901-4. In Woods’ image, the figure looks like an angel, painted in warm yellows and pinkish orange, with his silhouette in a dark grey; or a judge, perhaps, seen in profile. He looks as though he has been struck by lightning, and yet his composure is relaxed. While this image is as evasive as the others, it is luminous and serene in a way that offsets the darker paintings and ideas. Woods has not only subverted difficult images, but she has retained, like this figure, a sense of measure and composure amid her own expedition into the unpredictable world of human suffering, escape and how we watch it happen. 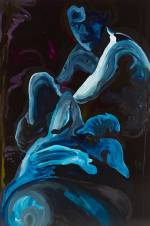