Valerie Hird: What Did Happen to Alice; My Avatar

Valerie Hird: What Did Happen to Alice; My Avatar

Valerie Hird ’s work explores cultural mythologies and the function they assume in societies within global culture. Over a 30-year period, Hird (b1955, Massachusetts) travelled regularly and extensively in the Middle East, Central Asia, Spain and Turkey, living among the Bedouin, Berber, Turkic and Kirghiz people. She is now “particularly interested in iconic images and forms – from ancient symbols to pop-culture emojis and memes – and how they can be interpreted differently by viewers in different countries and cultures”. Over the past year, she has adapted her focus to explore what she calls “biomythology”, a dialogue with self, at “a fractured intersection of history and memory”.

Her exhibition at Nohra Haime Gallery, What Did Happen to Alice; My Avatar, centres on a 12-minute, hand-drawn animated video. The artist ’s stated intention is to explore the impact of media through her lifetime by means of the language of animation. Although the drawings for the video were started in 2017, soon after the death of the television producer Frank Marshall, her partner of 35 years, the video piece was created entirely in lockdown, with her animator, film editor, producer, composer and fabricator all in different cities.

The immediacy of drawing, which has always underpinned her work, enables her to travel mentally and emotionally to conjure memory and a sense of self. The strange disconnect of lockdown enabled greater focus and a renewed capacity to “draw out” from past experience. The insight gleaned through recent personal bereavement imbues the project with a self-scrutiny against the wider context of unprecedented death rates from the pandemic. Hird is thus able to present a unique ephemerality through the motion of her avatar, Alice, while at the same time presenting an image of self and loss that enables the viewer to feel empowered, at a critical moment in global history. The work is poignant and well crafted and could not have been made by a younger artist. The video What Did Happen to Alice was selected as a semi-finalist in the Montreal Independent Film Festival and Los Angeles’s Jellyfest, won two awards for excellence in the Best Shorts Competition – in the animation and women film-makers categories – and was included in the official selection at the Toronto Film Channel Festival. The video follows Alice, a slip of white paper, who believes the American movie fantasy of the Middle East. Her illusions meet reality among wildly patterned landscapes and the shifting winds of social media. The original soundtrack was composed and performed by Mary Bonhag, the animation is by Martin de Geus and the editor is Max Ethan Miller.

When I interviewed Hird for Studio International in December 2015, she described herself as having been “a bookish kid”. In a Zoom interview (October 2020), she attributed her being able to work collaboratively and to live with nomadic tribes in Central Asia to having grown up on a farm. In the Studio International interview she said: “I was never cut out to be an archaeological illustrator. But I had been trained as one. Initially, those skills could be traded to give me access to archaeologists working in places and with the people who really held my interest, the remaining semi-nomads. These were groups outside, and distinctly different from, what we now think of as Middle Eastern cultures. Initially, I would trade my services as an illustrator to field archaeologists for access to my areas of interest. But later, as I became more confident, I went my own way by hiring a guide who could introduce me to families still making seasonal migrations. Even in the 1990s, many denizens of Marrakech, Istanbul and Cairo were only first or second-generation urbanites. Most had extended families still roaming the mountainous regions. Hospitality to strangers is a primary cultural trait. So for a month I could be hosted by a family without creating too much of a disruption. The families never accepted payment for their hospitality, but according to custom, all visitors should bring a house gift. Mine was always food. The Turkic family I stayed with had no word for ‘artist’ as we know it. And, as a single American woman, I had no value beyond being a curiosity. So to fit in, I would spend most of my time with the women, learning their chores and dialects. I think I can say I ’m sorry in about seven different languages!”

In What Did Happen to Alice, the artist presents herself as made up of a lifetime’s collection of books. Her stage set, on which the narrative is played out, is three-dimensional, the figure airborne, an animated version of The Arabian Nights and years of compulsive travel. Her exploration is pitched against the cultural dominance of the west, the political hegemony of an elite, with its ensuing dangers, and a yearning to understand visual systems. In addition to the 12-minute single-channel video animation, the exhibition includes four wall-mounted interactive stage sets and seven paintings. The paintings comprise two large-scale installations on paper, an oil on canvas, two oils on paper, a watercolour and a mixed-media work. 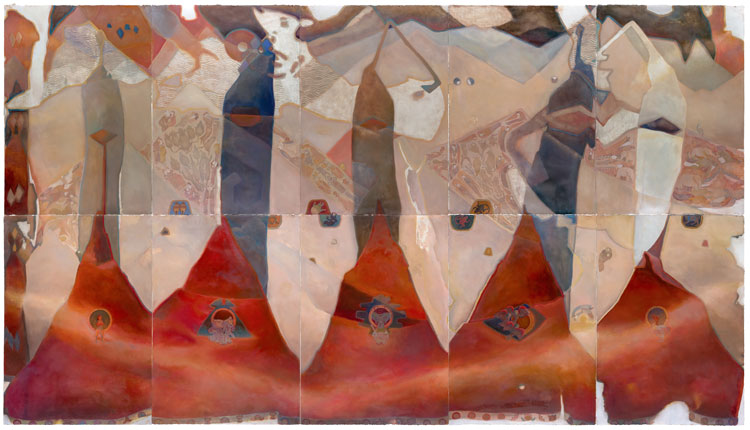 The exhibition is the product of a lifetime of questioning issues of gender and ethnicity. Hird questions whether individuals ever mature beyond first influences: “Using a fictional avatar, ‘Alice’, I embrace my white, middle-class identity. My series starts with the personal and weaves in the political using diverse media – large, colourful oil and watercolour installations, interactive stage sets and digital animation in a short, wild ride from my naive youth in 60s America through my career in the Middle East. Together, they depict a mind at work, going backward and forward in dialogue with myself across time and events as I struggle to find balance in our polarised present day.” 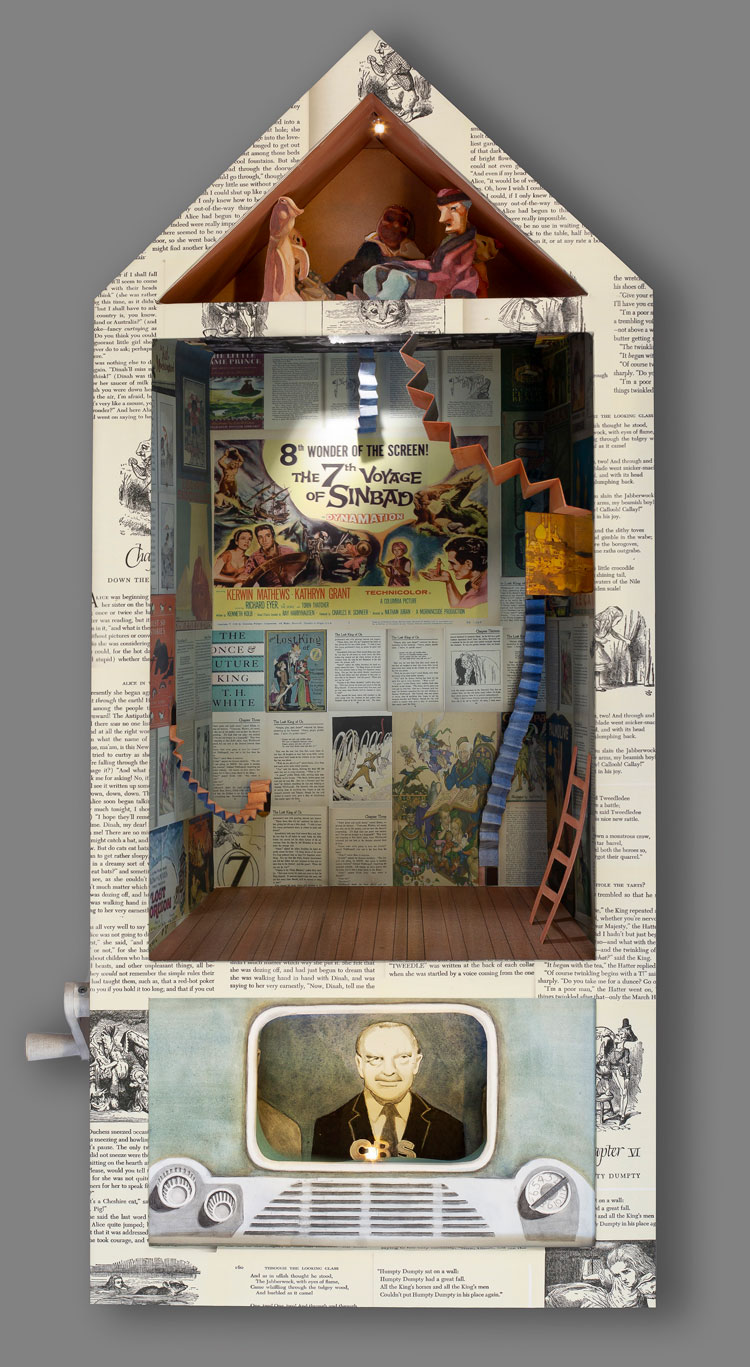 
The video becomes a personal comment on American society within global culture with the quality of a short story. Network News (2020) is the first of four wall-mounted sets inspired in part by Drawing the Curtain: Maurice Sendak’s Designs for Opera and Ballet, an exhibition of Sendak ’s stage sets at the Morgan Library and Museum in 2019. Alice ’s childhood room has been constructed from book text and movie posters. The attic houses toys to denote the innocence of childhood; in the basement, disconnected from the child ’s perception of the world, television news plays. 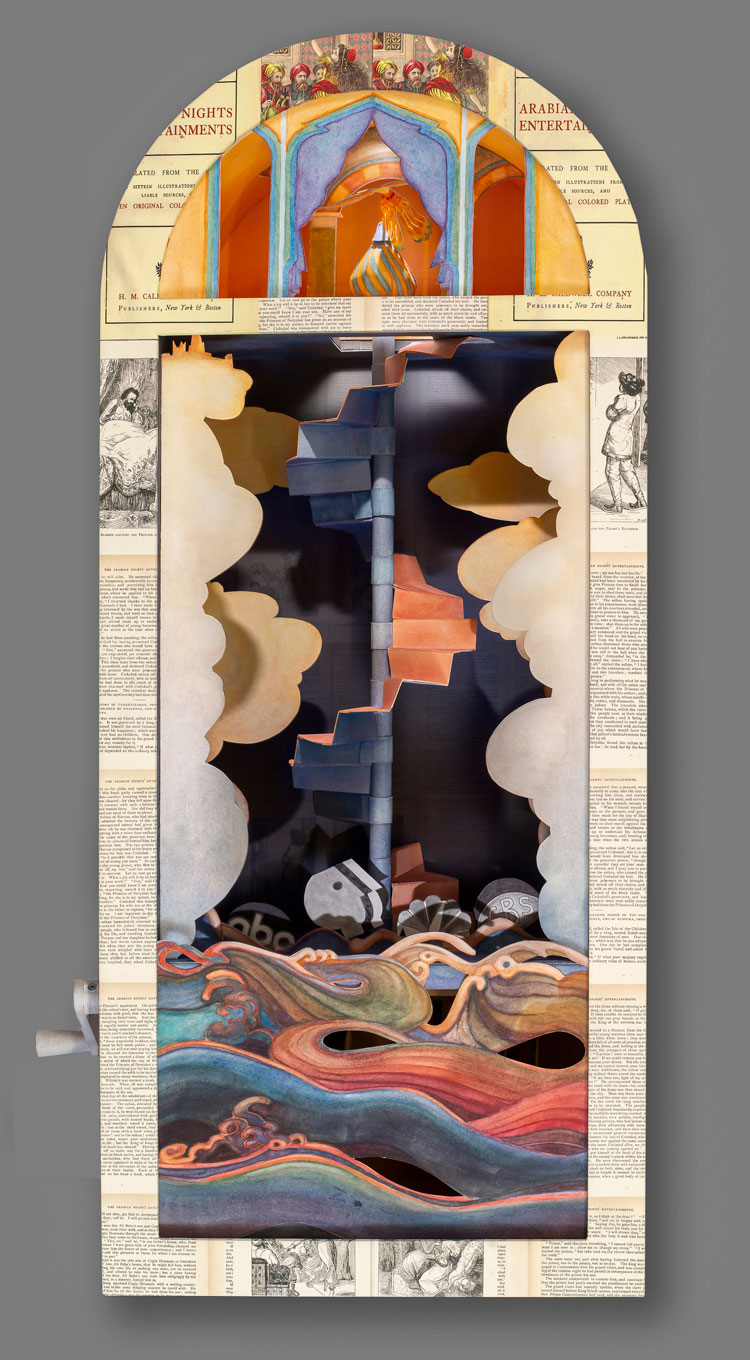 The second stage set, Transition (2020), conjures the world of travel and media. Text on the exterior surface is from European versions of the Arabian Nights. The attic represents the golden promise of fantasy adventure. Like Sendak, Hird employs crank mechanics rather than digital automation. New Media (2020), the third set, enables Alice to be surrounded by a fusion of culturally diverse literature and film posters set within a landscape embedded with the visual vocabulary found in nomadic textiles. Social media became the dominant form of communication during the artist ’s long period abroad; it is represented here, by darting origami birds in the sky. 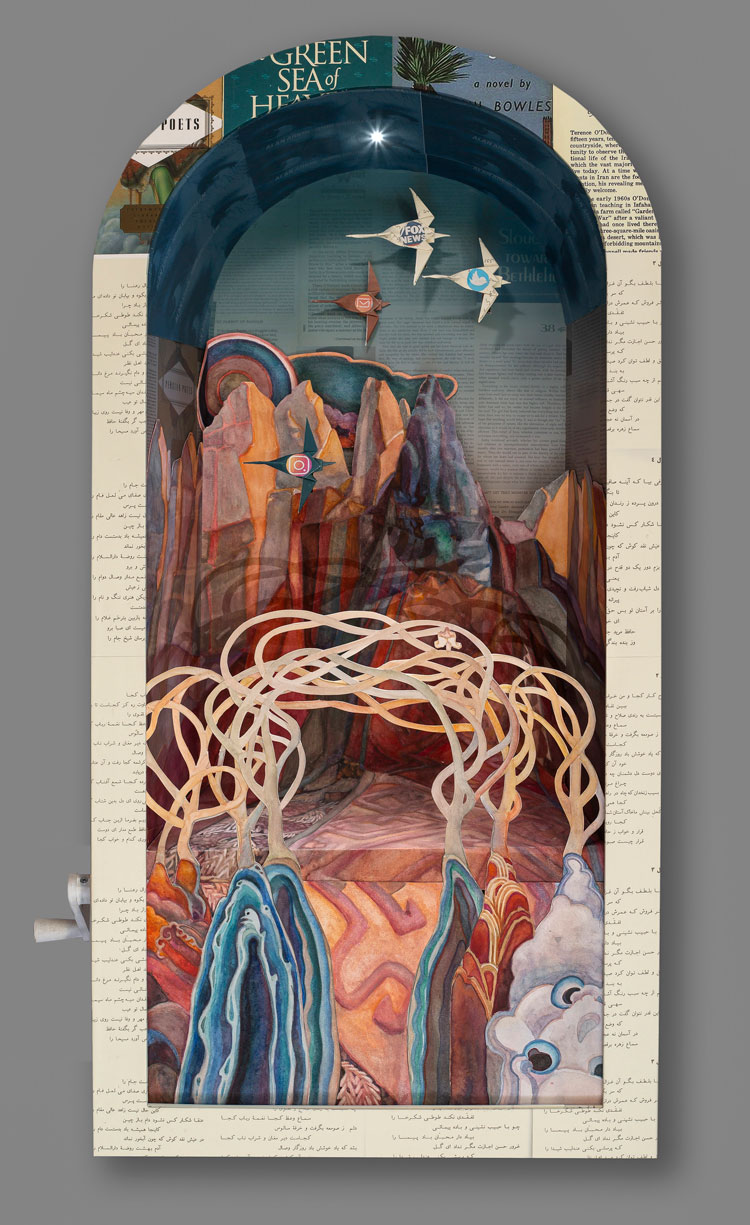 Boxed In (2020) has an inevitable mood of confusion, where layer on layer of information is claustrophobic, the opposite of the selfless hopes of the creators of the world wide web. The attic has become a cage casting the stage in to deep shadow; the disconnected basement represents the countries where the artist is no longer allowed to travel. 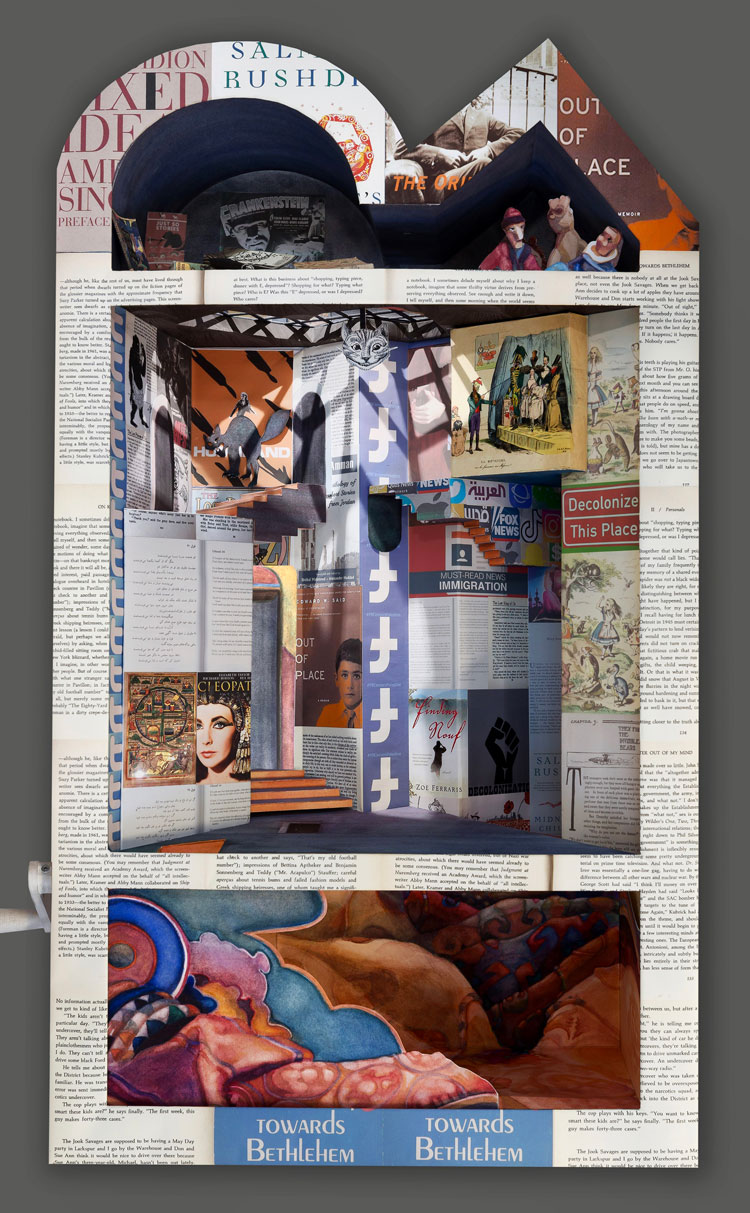 The media in the 60s were imbued with the altruism of JF Kennedy ’s positive messages, but over the ensuing 60 years – the artist ’s lifetime – they have become overbearing, with garish performances in recent years and the political abuse of social media such as Twitter, and the erosion of democratic process. Alice is the artist ’s white paper avatar, the embodiment of many aspects of her generation. She is the artist ’s alter ego: moulded by the media of the 70s and 80s and, more recently, challenged in the age of Instagram, when the media have caused her to be “de-formed by it, flattening her accumulated layers of experience”. The artist describes her avatar as a mere “slip of subtext, lost in America’s outsized presence in the global movie market and social media”.

Source Code (2016-2020) is an enlightening piece for the viewer, the installation of 94 small paintings on Stonehenge paper. Each painting is exquisitely detailed and beautifully crafted. Hird says each painting is “a phrase of a poem, each poem is alive and in conversation with the one next to it. Together, they represent a transformative period, linking memory with place in an intricate network of encounters and experiences. Although presented within an orderly framework of longitude and latitude, the individual paintings, like my thoughts, often collide in a mixed-up jumble of time and circumstance.” As a critical lexicon of images, Source Code is a mesmerising pièce de résistance.

The Elder Gods Weren’t Male (2019) is an impressive installation of 10 sheets of oil on paper. Hird says: “It ’s taken a decade for these figures to emerge. I knew them from my dreams, but to know them intuitively is not the same thing as painting them. For years they’ve guided my gestures and helped define my thinking, until they stepped on to the canvas fully fleshed, providing the locus points through which I experience space and time. In this painting, they act as non-gendered guides embedded with ancient and current pictographs and text and located within the geography of the near and Middle East and Central Asia.” The emotional and mental processes at work in this exhibition are inspiring and represent moments of self-realisation and acceptance of loss as well as an original take on global politics and the manner in which the perceptions of the US have changed in the eyes of the world.

Hird taught inter-cultural courses in universities in the Middle East and in the US where collaboration and communication underpinned her teaching just as drawing occupies a central role in teaching and her own practice. As Hird told me in that 2015 interview: “Drawing is uniquely suited to thought. It ’s accessible and portable, and can be easily reworked. Drawings are documents of honest and wonderfully human communication. The gestural marks are often unique to their maker – like a signature. It was the first method of telling a story, and it remains a fantastically useful – back to the future – strategy for communicating in our globalised world.”

The internet evolved while Hird was living abroad. In turn, social media replaced the reading of books and journals as the dominant reference material for her students. Performative imagery soon replaced text information. While digital technologies brought information more readily to hand, Hird ’s plaintive language is based on years of research and experience on the ground during a pre-digital era and dramatised visually with the sophisticated magic of childhood stories and a love of rugs, weavings and the oral history she experienced first-hand.

Although she seeks to explore the complexities of the media spanning her unique creative career, she has unwittingly created something more universal. Her rigorous drawing practice underpins the cohesive language of the animation that enables a subtle but direct personification of self. In this, Alice is not just the children ’s character from Lewis Carroll’s Alice’s Adventures in Wonderland (1865), but a feminist archetype too. Hird presents a distinct appraisal of self – as a brave single woman – albeit with an ennui in the tone, the solitariness of recent widowhood. She asserts the importance of pursuing the spiritual and political notions of survival and selfhood and the fact that we are made up of encounters and influences from childhood to the present. What Did Happen to Alice presents a well-constructed evolved, existential self, while addressing culture, the media and politics. 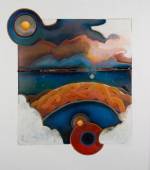 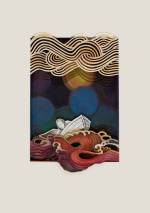