Untitled (Unconscious) at the TJ Boulting Gallery in London presents the work of five contemporary artists: Rachel Howard, Boo Saville, Gorka Mohamed, George Ziffo and Kikko Giannuzzi. Their work is situated between abstraction and figuration, and can be seen to reflect the ability of artists working in a world of spectacular change to retain individual identity.

Drawing plays an important role in the quest for personal expression, being a primal and immediate form of expression. The resurgence of interest in drawing, and the proliferation of publications on the subject, indicate the belief for many artists that the technological advances of the past quarter of a century need to be countered by reasserting the individual voice. Drawing is important for all the artists in Untitled (Unconscious), resonating as it does with the subtle power of an art form that is very often an art of absence; of whisper rather than declaration; of suggestion rather than certitude. In more than one instance here, the work is a means of assuaging a fear of the unknown, the process of exploration in visual terms as important as the final work.

Automatic drawing was developed by artists such as André Masson in order to express the subconscious. The hand was allowed to move “randomly” across the paper, chance giving rise to accidental marks and the freeing of the artist’s creative spirit. Rational control was reduced and thus marks and resultant forms could be seen to represent dream states or repressed experience. Automatic drawing was a pivotal practice of surrealist artists, pioneered by André Breton, Joan Miró, Salvador Dalí and Jean Arp. Later, the Abstract Expressionists explored the potential of the formal qualities of paint to explore the inner workings of the human psyche, Jackson Pollock and Mark Rothko being among the exponents of the unconscious, influenced by the writings of Carl Jung.

Howard is committed to the material properties of paint, and the manner in which they can be manipulated to insinuate ideas and feelings. The unconscious aspects of life assert a presence in all her work, as her recent solo exhibition, Northern Echo, at Blain Southern in London, revealed. Her work there showed a return to oil painting after years of working with house paint, where she explores the medium by applying and removing paint, leaving images that hover between experiential episodes, and resemble manuscripts or documents. Historic traces and freshly applied marks interact simultaneously; they are annotated vestiges in tune with memory and the subconscious experiences that interact with quotidian life. The painting process can be seen as a metaphor for the state of flux in life; faint images or suggested places are cast among the carefully nurtured surfaces of the new works. Recent work conveys a sense of veiled memory, where an air of melancholia is conjured.

Saville seeks a visceral quality in her painting to evoke emotion, applying layer upon layer of oil paint; colour is chosen for its emotional association. Seeking images beyond the everyday, Saville focuses on the qualities inherent in the materials themselves: “That sense of pushing a material, spending time with something to see what would happen. Could I communicate through the labour of the drawings? Could I defeat alienation and my preoccupation with dying? By taking images out, I want the viewer to use another part of their brain in order to read them. They challenge you to contemplate them rather than read them.”1

Saville’s trademark use of the Biro to create abstract, somewhat digital, effects by fine lines applied through hundreds of hours of intense drawing has given way to evocative abstract work in oil paint. “Holding within them time and thought, their production took me to a state of focus and clarity, frustration and elation. I have rejected images and photography in an effort to see what paint could do on its own terms, in its own world.” Of the work in the current exhibition, Saville explains: “I am interested in the idea of nothingness and how you can describe this in paint through negating subject but allowing colour and surface. I am trying to paint something shifting, disembodied that changes each time you look at it. That shift could be created by the point in the room that you are looking at the work, but also by the associations the viewer brings with them to project on to the work. These works develop using layers like a game of chess, and their outcomes are never known or planned. Rather than a conscious attempt at arranging figure and ground, the paint is manipulated so that changes exist on a boundary of imperceptibility.”2

Ziffo trained at Gray’s School of Art, Aberdeen, and the Chelsea School of Art, both institutions with a strong emphasis on drawing. He believes that Gray’s “probably had some bearing on my subsequent development, in that I have always had an interest in mark-making and recording the movement of the hand”.3 Evolving from purely abstract paintings to a figurative art, Ziffo explores the portrait. A reductive approach to painting has seen the development in his work between drawing and handwriting, an area of visual exploration of interest to many artists at the present time – and which has prompted the new Studio International publication The Drawn Word. He states: “I'm interested in the immediacy of drawing and the subconscious processes that underpin both drawing and handwriting. A recent body of large-scale paintings has been created through a process in which I make dozens of small-scale maquettes on paper where I will try to arrive at an image very quickly. I will then choose through editing, images, which I will then translate on to paintings on canvas on a large scale. I’m interested in the process of translation from maquette to painting, and how the movement of the hand becomes the movement of the body in a large-scale work. The imagery of the current paintings is inspired by my interest in perceptual psychology, and figure/ground relationships. It also refers to a range of influences from 20th-century painting, including Guston and Mondrian. Other influences include the shared origins of writing and drawing in ancient civilisations.”4

Mohamed grew up in the Basque area of Spain, attending Goldsmiths for his MA (2006-08). He subsequently settled in London, being included in Ventriloquist (curated by Emma Dexter) at the Timothy Taylor Gallery. London. His Spanish roots are overtly expressed in works such as Seated Composition (2013), which resonates with the visual language inherent in the work of Miró and Dalí, but also of the Spanish Baroque. His work has been described as existing somewhere between Goya’s Doña Josefa and Felix the Cat, engaging as he does with a wide range of subject matter: still lifes, amorphous forms, cartoons and organic geometries. Brechtian theatricality is evoked through man-made scenery where all sign of nature has been eradicated. By extension, Mohamed questions and mocks the role of the artist. He says: “Through this pictorial language, there is the intention to reflect on the things that are affecting us psychologically in our socio-cultural reality, as if the fact of presenting the toxic found in humanity would work as the catalyst of its own remedy.”5

Curator and researcher Rosa Lleó has said of Mohamed: “There are many overlapping levels of humour in each of his works: the comical situation of the classic silent films; and a more pessimistic one that uses more subtle techniques such as allusion, the absurd and satire. From the Baroque dramas to the anxiety of Beckett and Artaud, the work of Mohamed expresses the feeling that we are laughing to keep ourselves from crying, the generalised anxiety arising from the vulnerability of the modern individual.”6

The most expressionistic works in Untitled (Unconscious) are the haunting and dramatic works of Giannuzzi, an artist whose practice is outwith the conventional artist’s career. Living on the island of Elba and having schizophrenia, he has received no formal training, although he has attended art therapy classes. His brother Gigi Giannuzzi was a partner of the Boulting Gallery in London until his death, aged 49, last year. Kikko Giannuzzi has made raw, nightmarish images to assuage the loss. While having knowledge of art movements such as Art Brut and the work of Jean Dubuffet, his is an instinctive and primal expression. He explains: “I reproduce in a totally unconscious way what I see in the white canvas, the subjects choose me, often nightmares, and in my paintings I look for a safe place that I sometimes find. Home.”7

Untitled (Unconscious) is an intriguing and impressive exhibition. 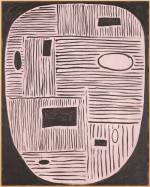 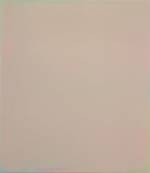 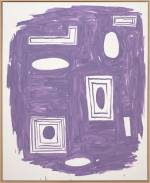 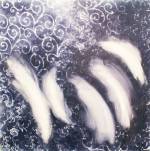 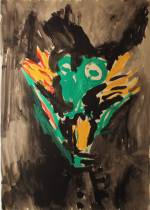 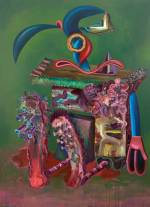 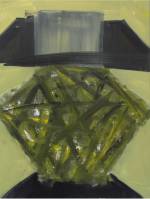 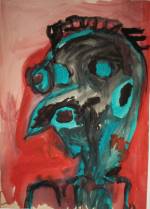