Under Cover: A Secret History of Cross-Dressers

Under Cover: A Secret History of Cross-Dressers

Based on found photographs collected by French film-maker Sébastien Lifshitz, this exhibition at the Photographers’ Gallery examines the historical notion of cross-dressing, but in concentrating on a binary way of thinking, it has missed a trick 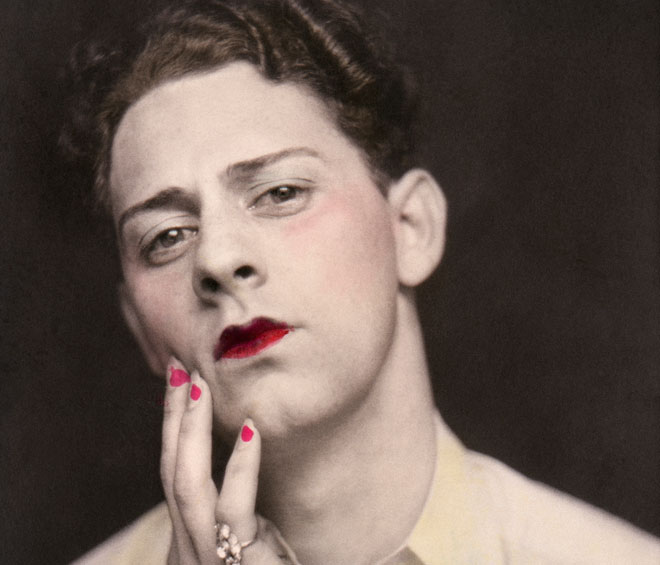 Next to the opening text as you enter Under Cover: A Secret History of Cross-Dressers hangs a series of more or less sequential photographs portraying a woman getting changed in a domestic setting, while looking into the camera. These staged pictures are not about the sexualised process of undressing and redressing, but about the cultural transformation of a woman into a man through the private act of cross-dressing. This photo series of a female cross-dresser marks the framework of the exhibition at the Photographers’ Gallery in London.

The show explores a historical fraction of the narrative of male and female cross-dressing practices and how they are connected.1 Dating back to the turn of the 20th century, men dressed in women’s clothes have largely been associated with homosexuality, hence going against the grain of the heterosexual norm. On the other hand, women dressed in men’s clothes, such as trousers and suits, have largely been considered as progressive fighters for equality. Such an understanding challenges a binary sex and gender perspective. In an attempt to encourage reflection on sex and gender issues within the societal norms, in her 1990 book Epistemology of the Closet, feminist scholar Eve Kosofsky Sedgwick made the important point that writing in the 1980s focused on either “modern gay or anti-homophobic theory”.2

Concentrating on the period from the 1880s to the 1980s, the show comprises French film-maker Sébastien Lifshitz’s collection, begun in 2001, of found amateur photographs of transvestites that he acquired at flea markets and garage sales and from eBay. These images served as background research for his films Wild Side (2004) and Bambi (2013). Just like the photographs he accumulated, his films depict the lives of people living in transsexual communities on the margins of society. Since the exhibition, however, often refers to the male cross-dressers as transvestites or to the female cross-dressers as lesbians, it visualises the historical narrative in which queerness, comprising the freedom of unclassifiable speech and bodily expression as we understand it today, did not exist. Taking into account that cross-dressers have always challenged the societal limits, the curatorial interrogation of the show rather projects a binary way of thinking (lesbians, transvestites and straight people), instead of connecting it to today’s queer discourse. 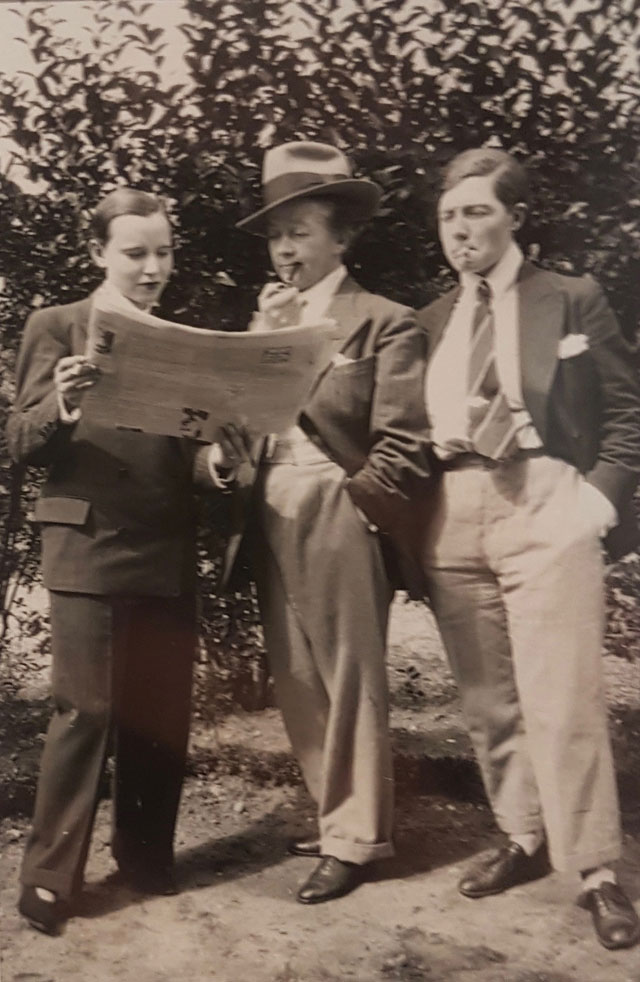 The show is divided by themes, starting with Transformations. All the photographs in this first room, apart from the single-framed series described above, show men dressed in women’s clothes, putting the emphasis firmly on the refashioning of male bodies and how this is related to female aesthetics at the turn of the 20th-century and during its early years. It is the feminised bodily gestures of the men depicted, as well as the fetishised female clothes they wear (straps, bras, high heels, veils) and the accessories (nail polish and lipstick), that enable them to construct their identity through what the US philosopher and gender theorist Judith Butler has called a “stylized repetition of acts”.3

In the same room, a series of three very small-scale photographs, each depicting a man and then one showing both men together, caught my attention. Two things drew me to them. The first was the technical characteristics of the photographs, and the second was the softly coloured details, which stood out among all the other monochrome photographs. The lipstick, the nail polish and the shirts of the two men have been coloured in pink and red, emphasising how significant little feminine details are to the embodied practices of cross-dressing. 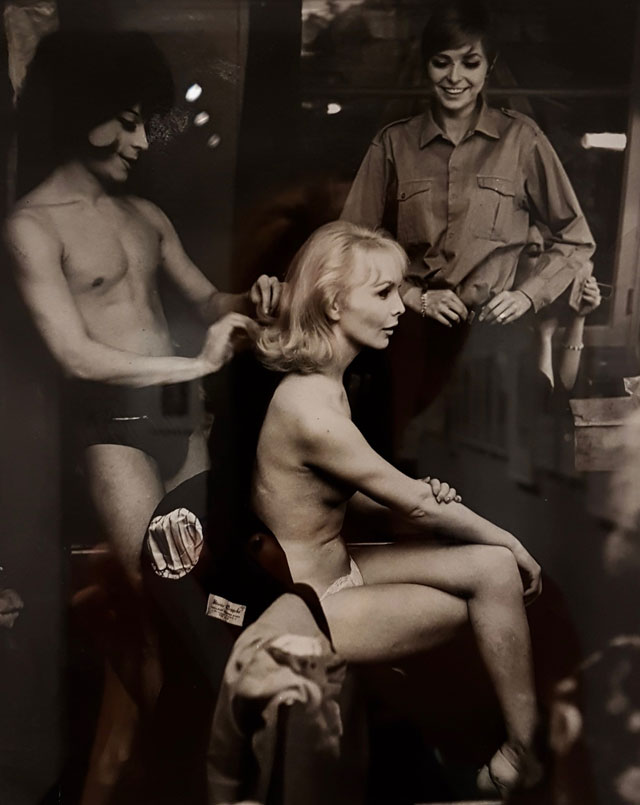 The activity of cross-dressing is culturally complex and also has biological implications. The next section of the exhibition then continues with a focus on the Algerian-French transsexual Marie-Pierre Pruvot (born Jean-Pierre in 1935), who performed under the stage name Bambi and was the subject of Lifshitz’s 2013 documentary. For more than 20 years, the flawless-looking blonde beauty worked at the two most famous nightclubs in Paris before becoming a French teacher. Although the exhibition considers Bambi’s ways of working and notes that she became transsexual in the 1950s, a time when sex and gender transformation was not legally available, the show’s engagement with the implied biological issues of cross-dressers is limited to remarking that Bambi took hormones and underwent an operation. Reducing the biological issues of Pruvot’s life in this way narrows the current growing and rich discourse on transsexuality and transgender to a single-lens image.4 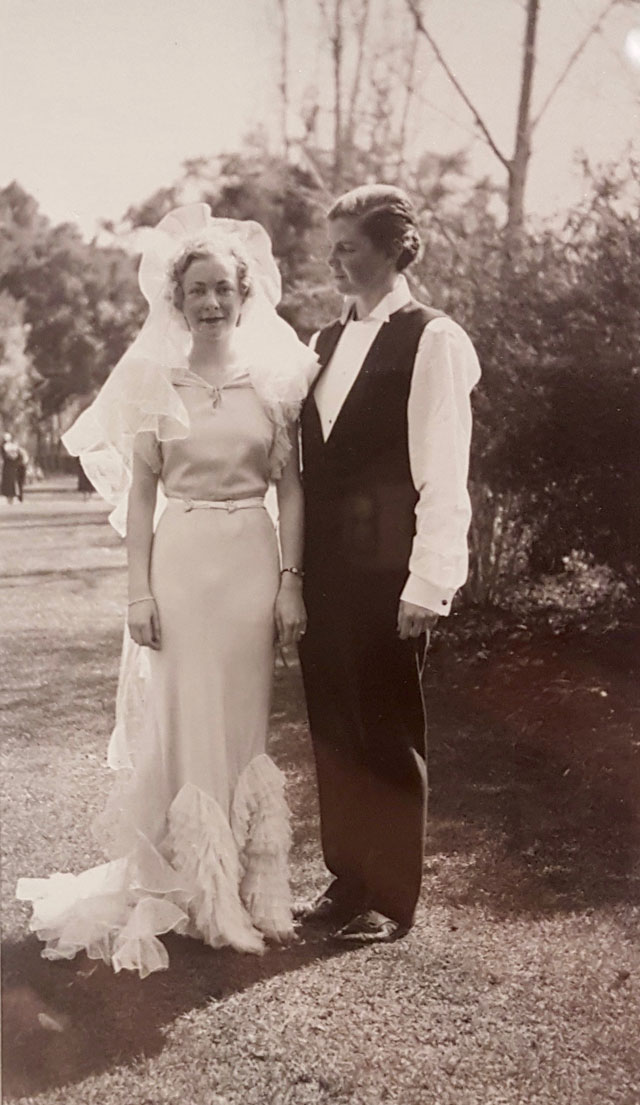 The next section provides an insight into transgender roleplays at a prisoner of war camp in Germany in 1915, as well as into Alexander Dumas’s coining of the notion of feminism in 1872 in L’Homme Femme. He used the notion to address the fight for women’s rights that would transcend traditional societal roles. The photographs that close the show at the end of the long-stretched exhibition space depict young women staging and performing in eroticised mock weddings at American women’s colleges, such as Wellesley College, in the 19th-century, and the “New Women” dressed in suits, which together with the photo series in the first room frames the whole exhibition. This, however, was not directly addressed.

Despite showcasing fascinating visual accounts of pivotal historical points anchored to Lifshitz’s collection, the critical downfall of the show is therefore the curatorial framing, because it makes the women in these found photographs seem like a satire of sex and gender-self-conscious and confident people, while the selected images of the cross-dressed men mainly represent the more widely known cultural history of male cross-dressing, the latter often linked to homosexuality. For example, think of the stereotypical image of the gay ballet dancer, which has been flipped in the film Billy Elliot (2000) since the young dancer Billy behaves straight when his close cross-dressing friend tells him that he is gay.

Hence, instead of directly linking the history of cross-dressing to the notion of queerness, the show visualises a dualist way of thinking about identity politics and does not directly challenge it. This is related to what Sedgwick criticised in saying that she desired to do away with writing that adjudicates between homo- and heterosexuality. She therefore focused her own work on exploring the potential realms that lie in between their definitions.5 In this sense, Under Cover reminds us that some men and women in the 20th-century radicalised sexual and gender norms and aesthetics in order to be able to be their queer selves in public – and that is who we are today.

References
1. The anonymous photographs have now, for the first time, been classified and curated for an English-speaking audience. The collection was first exhibited as part of Rencontres d’Arles as Mauvais Genre: Collection Sébastien Lifshitz, at the Galerie du Jour Agnès b, in 2016.
2. Epistemology of the Closet by Eve Kosofsky Sedgwick, published by Berkeley: University of California Press, 1990, page 11.
3. Performative Acts and Gender Constitution: An Essay in Phenomenology and Feminist Theory by Judith Butler. In: Theatre Journal, Volume 40, No 4 (December 1988), page 519.
4. For instance, see Beatriz Preciado’s writings, such as Testo Junkie: Sex, Drugs and Biopolitics in the Pharmacopornographic Era (first published in 2008 and republished in English in 2013 by The Feminist Press, New York) and Manifiesto Contrasexual (published in Spanish by Opera Prima, under the name Paul B Preciado in 2002).
5. Op cit: Epistemology of the Closet by Eve Kosofsky Sedgwick, page 3.