Tunji Adeniyi-Jones – interview: ‘I want to show composure and a confidence. I don’t want these figures to feel they have anything to prove’

Tunji Adeniyi-Jones – interview: ‘I want to show composure and a confidence. I don’t want these figures to feel they have anything to prove’

Adeniyi-Jones talks about his new paintings in That Which Binds Us, his first solo show at White Cube Bermondsey

The Brooklyn-based artist Tunji Adeniyi-Jones (b1992, London) paints sumptuous figurative canvases underpinned by ideas around belonging, connecting across cultures and the transformative power of travel. Hybridity defines his experience. Born in Britain of Nigerian heritage, Adeniyi-Jones trained at the Ruskin School of Art, Oxford. A trip to Nigeria in 2012, while still an undergraduate, proved pivotal; there he met local pioneers such as Ben Enwonwu and Bruce Onobrakpeya, which enabled him to incorporate his questions around hybrid identities into his painting. Thereafter he moved to the United States, where he earned an MFA from Yale School of Art, Connecticut, and he completed six months at Kehinde Wiley ’s Black Rock residency programme in Dakar, Senegal. His first solo show at White Cube Bermondsey, titled That Which Binds Us, reflects on the intangible qualities that build community across different environments. 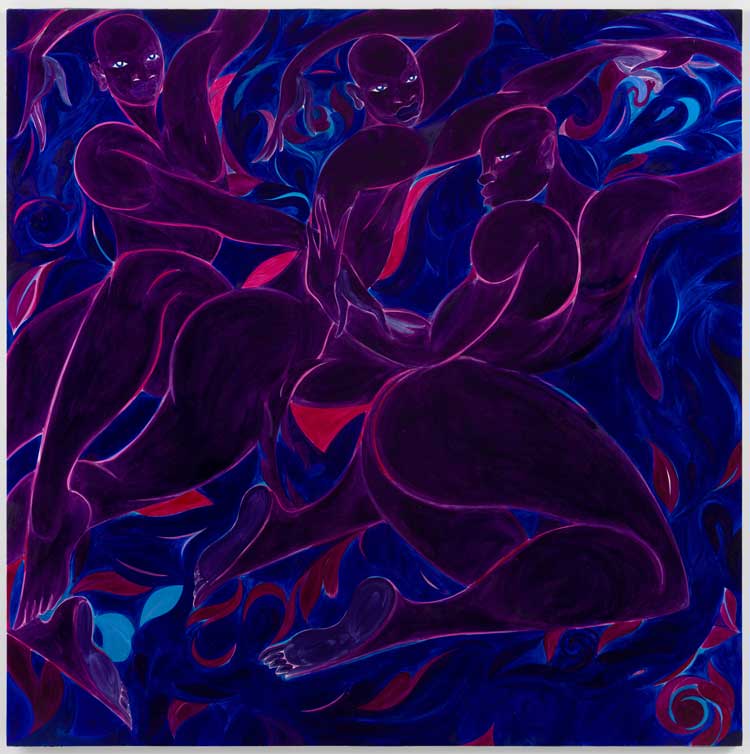 Adeniyi-Jones presents 12 exuberant large-scale paintings, filled with graceful, androgynous black bodies, whose limbs fuse and entwine with the foliage and organic patterning of the background. Sometimes extraneous limbs appear or don’t quite fit anatomically with the figures – part of the artist’s deliberate unlearning of his rigorous academic training in pursuit of a more expressive direction. Hands and feet are particularly freighted with narrative and emotive potential. “That’s where it becomes really expressive and performative,” he says. “So, you'll see a finger delicately touch the shoulder of another figure and that becomes a really charged moment, and I suddenly don’t have to tell you anything else about who or what these characters are, you can just focus on that connection and that touch.” This show includes three sets of works: Poetic Feet, The Youth and The Virtues. He paints in series, finding that repetition allows him to fine-tune his themes and become more experimental. 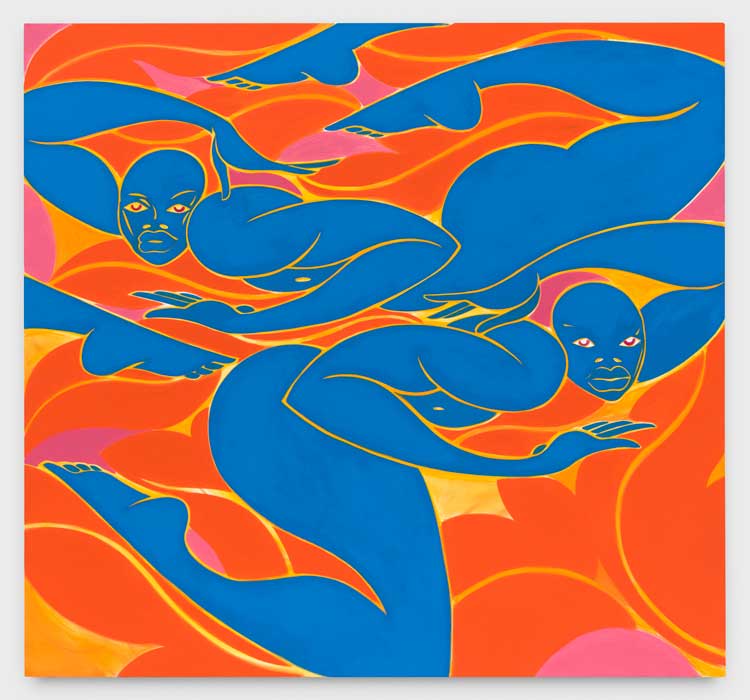 Rather than depicting real bodies, Adeniyi-Jones sees his muscular figures as archetypes embodying virtuous qualities. They flow perpetually in a dynamic dance, expressed in joyful colour and exhilarating rhythm. Yet amid the motion, the figures exude a striking poise. “I really want to show balance and grace, at all times, and a composure and a confidence. I don’t want these figures to feel like they have anything to prove.” This compositional tension between poise and movement is important; the artist wants to liberate the figures from the “coercive” environment he experiences as a black person in America. “I’m actively trying to negotiate that with what I’m seeing around me and then deal with that in the work and try to free the figures of that tension,” he says. 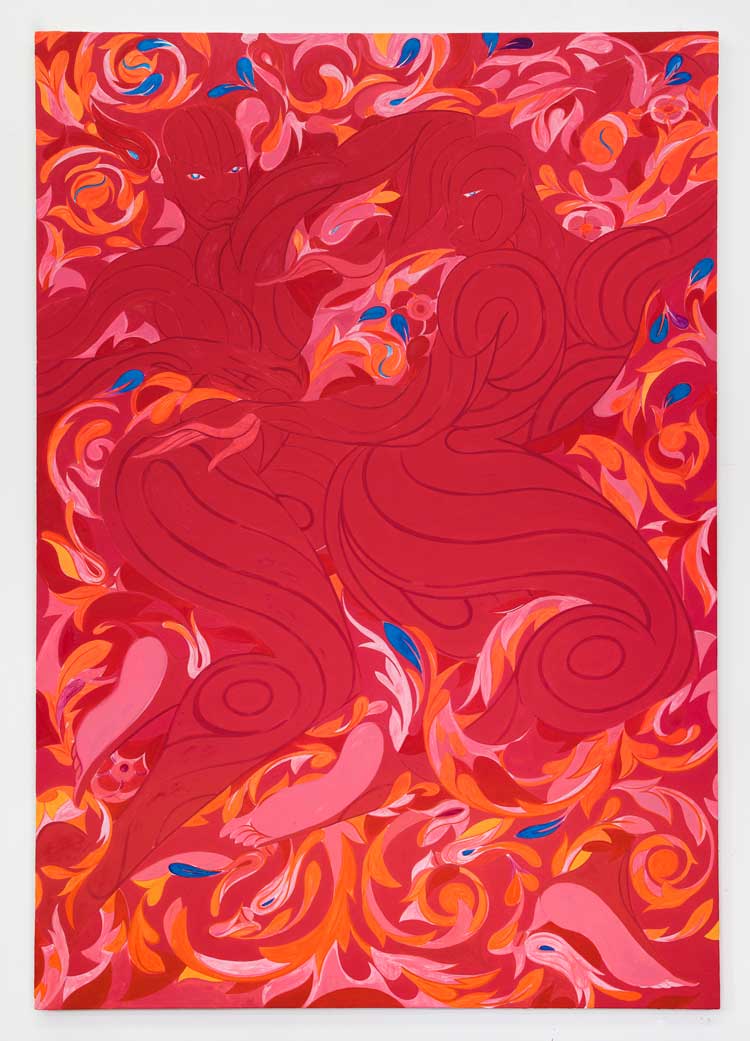 Adeniyi-Jones’s distinctive brand of figuration draws on Yoruba mythologies, West African sculpture, particularly Benin and Ife bronze heads that inspired so many European artists in the early 20th century, and German expressionist painting. Increasingly, however, he portrays his figures devoid of specificities that could pin them to a time and a place.

Engulfing them is a background of curvaceous, vegetal-like forms, which Adeniyi-Jones regards as a protagonist in its own right. Whether it is benign or malevolent is ambiguous. These backgrounds draw inspiration from a range of sources, from the ornamentation found in medieval illuminated manuscripts to the speculative fiction writings of Octavia Butler. His backgrounds are punctuated with intense accents of colour such as electric blue or fuchsia – a practice he began after noticing how subtle flashes of colour animated the decoration of buildings in Senegal. 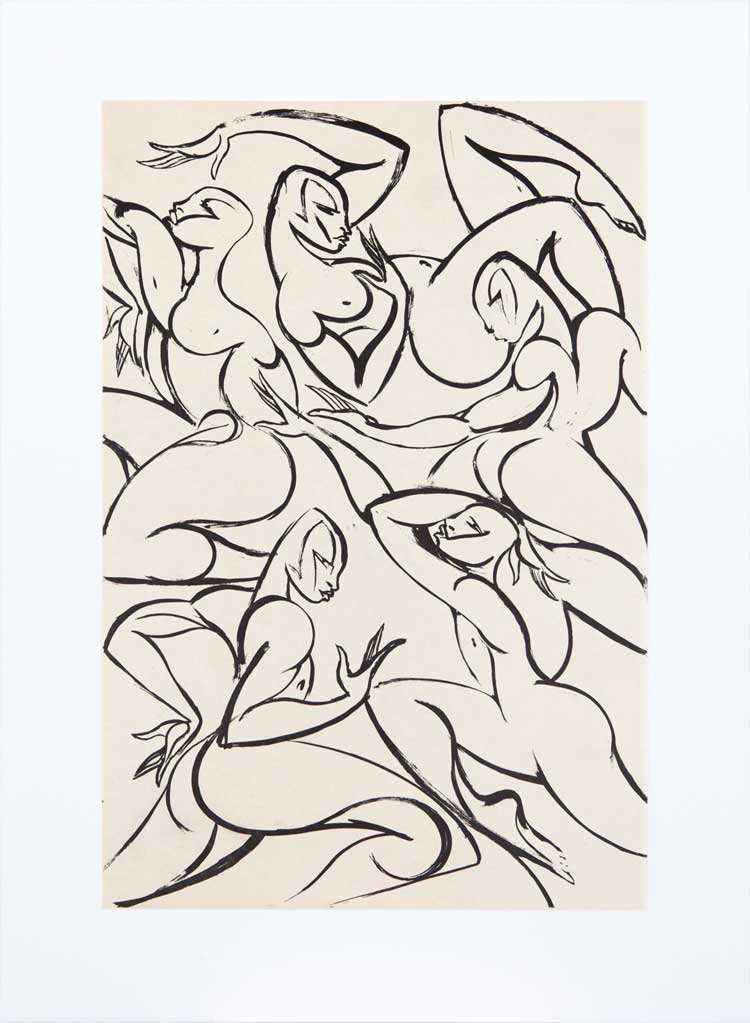 Coinciding with this show at White Cube Bermondsey is Adeniyi-Jones’s inaugural museum exhibition, Astral Reflections, at Charleston in East Sussex, which will run to 13 March 2022. The show places him in an intriguing dialogue with the Bloomsbury Group artist Duncan Grant, whose first solo exhibition, from 1920, has been recreated concurrently at Charleston. 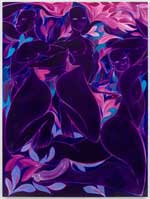