Directed by Andreas Koefoed, this riveting documentary about the controversial Salvator Mundi, the most expensive artwork ever sold, exposes a tale of global power, money and politicking 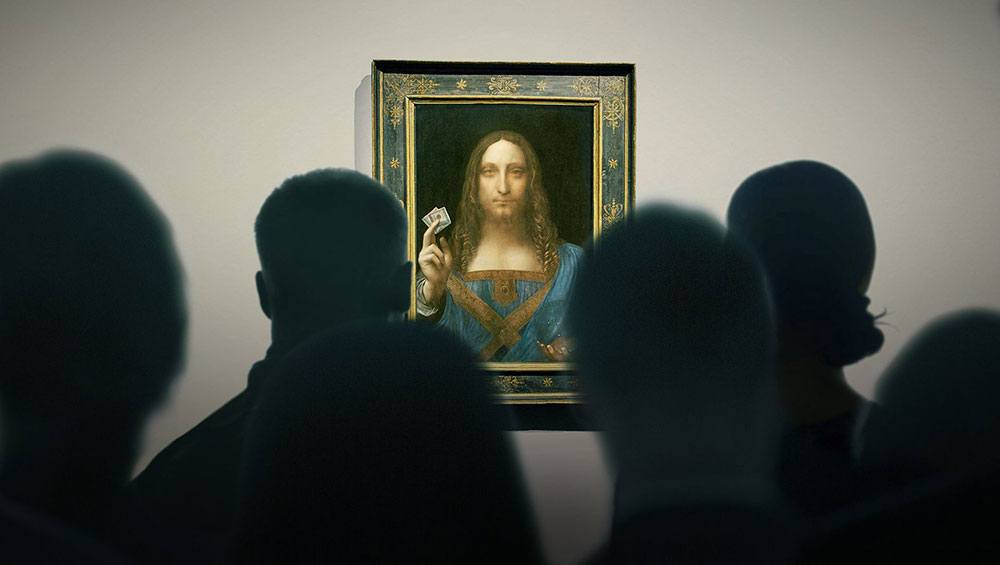 A decade ago, the queues were snaking around Trafalgar Square for the National Gallery’s blockbuster Leonardo da Vinci exhibition. Displayed in one of the show’s hushed rooms was the notorious Salvator Mundi, an early-16th-century painting of a curly haired Christ with one hand raised in blessing, which had previously been presumed lost. Questions regarding its authenticity hung heavy in the air, just as they did six years later when Christie’s sold it for a staggering $450m (£342m). But how did a once cracked and flaking panel presumed to be by an unknown Renaissance artist become the world’s most expensive painting? That’s the central question of this riveting documentary: a global tale of power, money, crime and politics in which the Danish film-maker Andreas Koefoed peels back the multiple layers of mystery surrounding the divisive artwork.

When Alexander Parish spotted a battered painting listed as “after Leonardo” at a New Orleans auction house in 2005, he knew he was on to something special. Robert Simon, a dealer in old masters, agreed, speculating that it was the work of one of Leonardo’s pupils, and the pair bought the ostensibly undervalued painting for $1,175. Supposedly a copy of Leonardo’s lost Salvator Mundi (Saviour of the World), the panel was shown to the renowned conservator Dianne Modestini. It was during the process of restoration, as she removed centuries of dirt and dodgy overpainting, that she began to believe that this was, in fact, Leonardo’s lost masterpiece. Her discovery of a pentimento (a visible trace of an earlier element beneath the layers of paint) revealing that Christ’s thumb was originally in a different position, provided persuasive evidence: “No one except Leonardo could have painted this picture,” she concludes. 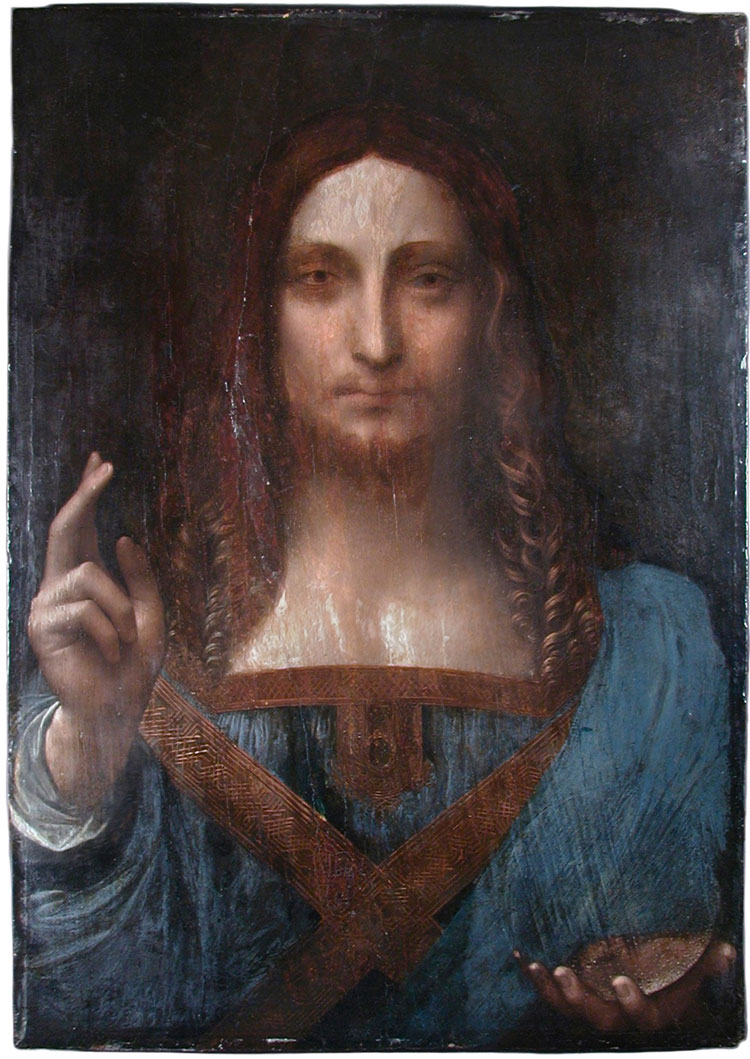 Modestini obsessed over the painting, which she diligently restored following the death of her husband, the great Italian conservator Mario Modestini. Some say that, in her devotion, she over-restored it. The German art historian Frank Zöllner, for instance, describes the painting as “a masterpiece by Diane Modestini”. “Ridiculous,” she retorts, “I can’t paint like Leonardo … it’s very flattering but absurd.” The New York magazine critic Jerry Saltz is another unconvinced voice, announcing that it seems highly improbable for a lost work by the most famous artist of the High Renaissance to suddenly turn up in America; “It’s not even a good painting,” he declares. Further scepticism stems from the large, disfiguring crack in the walnut panel, which wondrously disappears after Modestini’s restoration. Surely Leonardo the perfectionist would not have selected a panel with such a knot.

In 2008, the restored painting was shown to a group of Leonardo scholars at the National Gallery in London. No consensus was reached regarding its authorship. As one of the experts, Maria Teresa Fiorio, notes in the film, it is difficult to judge a painting in a conservation state and, in any case, she was never asked whether or not she believed it to be the work of the master. Nevertheless, this did not stop the gallery from displaying the painting as an authentic Leonardo in its 2011 exhibition – an eyebrow raising decision that the show’s curator, Luke Syson, still stands by. Another doubter is Robert K Wittman, founder of the FBI’s art crime team, who says the provenance of Salvator Mundi is very murky. This is something of an understatement. 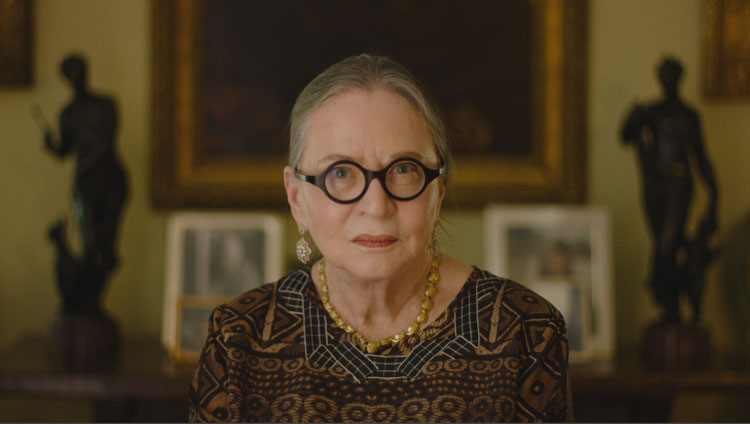 Although the film avoids taking a position on the painting’s attribution, it reveals how all the involved parties stood to make significant financial gains by choosing to believe in its authenticity (even Modestini received a percentage from its sale as a genuine Leonardo). But with so many unresolved questions, no museum wanted to touch Salvator Mundi, and certainly not at the asking price of $200m. As the film progresses, the question of authorship is increasingly overshadowed by the machinations of the art world. Enter Yves Bouvier, a Swiss art dealer who, in 2013, sold the painting to a Russian oligarch at a vast markup; after purchasing it for $83m, Bouvier sold it the same day to Dmitry Rybolovlev for $127.5m. Two years later, a furious Rybolovlev took Bouvier to court, accusing him of swindling. The costly and protracted legal dispute ruined Bouvier’s reputation, though judging by his on-screen performance, did little to rein in his chutzpah.

The fallout from that episode led Rybolovlev to bring Salvator Mundi back to market, where he made back his losses, and then some. This was largely thanks to the remarkable marketing machine that is Christie’s, which dubbed the painting “the male Mona Lisa” and produced a publicity film in which adoring viewers smiled and wept in front of it (including another famous Leonardo –DiCaprio). The 2017 sale itself was a highly theatrical affair and though the buyer wished to remain anonymous, the high price naturally piqued the interest of the intelligence community, who raised concerns regarding potential money laundering and the shifting of assets to support terrorism.

Salvator Mundi’s new owner was later revealed to be the Saudi Crown Prince Mohammed bin Salman, a fact that propelled the painting into the realm of geopolitics and cultural nation-building. Later that year, the Crown Prince agreed to loan the painting to the Louvre for its major Leonardo exhibition, but when the gallery refused to comply with the request to hang it alongside the Mona Lisa, the offer was rescinded. Right up until the opening, an empty spot was left for the painting, the whereabouts of which remains unknown. It might reside in the desert, be stashed in a Swiss freeport, or even be hanging aboard Mohammed bin Salman’s half-a-billion-dollar super yacht. Most agree, however, that the artwork will likely play a key role in the Crown Prince’s plan to transform Saudi Arabia into a cultural hotspot, improving the country’s global image while tapping new income streams in a world buying less oil.

The Lost Leonardo tells a remarkable story that is still unfolding. Koefoed has done a superb job of weaving an intricate narrative into a compelling and – for a talking-heads documentary – visually engaging film. The question of who painted Salvator Mundi becomes secondary to a story that essentially boils down to an examination of greed, myth-making and the power of belief.

• The Lost Leonardo has been released in the US and will be in UK cinemas from 10 September. 2021.