In 2008 Bernard Lassus finally completed his major project for the company Colas. Now this achievement is celebrated, among other accolades, by a large-scale colour brochure, which completes the picture. This is not the first time that a publication on this project has been made, but it is the most substantial description.

Professor Bernard Lassus was noticed as early as 1990, when his rest area on the A45 Nîmes-Caissargues motorway brought landscape and garden design to the fore, replacing a filling station in the first instance, with verdant rest areas as well as landmarks such as his 'Tour Magne' (structure one of two identical belvederes, located on a prominent site overlooking the motorway) and also, quite dramatically, the re-erection, with the collaboration of Norman Foster, of the façade of the theatre from nearby Nîmes, demolished there to permit the construction of Foster's innovative 'Carré d'Art'.1 Here Lassus reasserted ancient and traditional landscape values in a way that brings contemporary landscape to play in places of intensive activity. He works to enhance or pick out certain existing landscape features within the overall context of a site and he has liberated the poetics of such potential sites.

Nîmes-Caissargues was of course a large-scale site, but with the 'Hanging Gardens of Colas' Lassus has shown his skill on a much smaller and more intimate scale. There are three interconnected areas in and around the Colas headquarters, which on a seasonal theme all express the creativity that Lassus brings to a busy urban locale. He has cleverly interwoven natural and artificial landscape elements in such a way that, against the persistent hum of a busy dual carriageway an escape is possible, alleviating the site interference with an overall sense of sanctuary. The office buildings themselves already contribute to this level of protection by blocking out road noise. A kind of oasis is created by Lassus, using multicoloured garden elements (which can respond to the four seasons) plus a water wall designed to intrude a natural sound effect of falling water, together with a flickering light effect, which adds to the exclusion of the road noise in the innermost re-entrant of the L-shaped block. Artificial trees (Oak, Virginia Tulipier) are brought into play here. The historian John Dixon Hunt (a colleague of Lassus when he was a fellow at Harvard University's Dumbarton Oaks Centre) compares the roof garden created there by Lassus to that on the Colas Building's ground floor. Here he finds that the roof level has established itself as a 'Theatre in the Clouds', complete with a 'Theatre de Verdure'. The cut-out wings are emphasised by Dixon Hunt, as 'receding like theatrical scenery'. One could say that an effect of traditional 'coulisses' (a device much resorted to in the l8th century gardens) is established by Lassus. Follies, such as a cave, are inserted at centre stage. A cliff, a cave and a 'forest of hanging creeper' lead to an illuminated panel giving onto an infinity perspective. Up on this level there are, of course, Lassus's signature creations of coloured steel stalks and blossoms, designed to be moved around at will. All this makes a powerful contrast to the commercial world of Boulogne-Billancourt, down below.

What Lassus has achieved here, against seemingly overwhelming odds, has been the creation of 'Un Sens du Mystère, au-delà de nature et culture' in the words of the historian and critic Michel Conan.2 Against seemingly impossible odds, he has achieved these mysteries amounting to the creation of a vertical garden. Via the lift, the various intermediate sites are revealed one by one.

It is not hard to recognise that Lassus actually began his career as a painter, although the added detail that he trained under Fernand Leger in the 1950s in Paris gives the real clue. At an early stage, however, Lassus was appointed Professor of Architecture at the Ecole des Beaux Arts in Paris, but it took until the 1990s for the full realisation and implementation of his unique philosophy through the foundation of a Diploma of Advanced Studies in Landscape, directly linking the Ecole d'Architecture in Versailles with the Ecole des Hautes Etudes.

The 'Jardin des Pins' here offers a unique combination of artificial and natural landscape elements and 'plantings', supplemented by bed enclosures of primary colours. 'Le Jardin de l'Attente' actually precedes the 'Theatre de Verdure' providing a transition where an array of multicoloured vertical 'tubars' provides an enthralling preamble to the theatre itself; as the word indicates, a 'waiting-space', traditional in all theatres large or small. Lassus has over the entire project achieved a metaphor for the fusion of the mechanistic and the natural aspects of the environment, in such a way that a rare model exists as to how a landscape might establish a new creative mediation between the two, to harmonise rather than divide design agendas of the future. 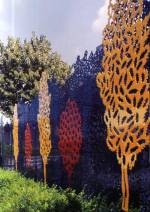