The Computer and Music: Coordinate Expansion

The Computer and Music: Coordinate Expansion

[Schillinger's views on the mathematical basis of various musical styles were formulated before digital computers were developed (the book was published in 1948), but they could be used as a basis for experiment on the production of music in various historical styles generated by a computer.]

'As each coefficient of expansion is applied to music, the original is translated into a different style, a style often separated by centuries. It is sufficient to translate music written in the 18th century by the coefficient 2 in order to obtain music of greater consistency than an original of the early 20th century style. For example, a higher quality Debussy-like music may be derived by translation of Bach or Handel into the coefficient 2.

'The coefficient 3 is characteristic of any music based on 4√2 (i.e. the "diminished 7th" chord). Any high-quality piece of music of the past exhibits, under such projection, a greater versatility than any of the known samples that would stylistically correspond to it in the past. For the sake of comparing the intuitive patterns with the corresponding forms of geometrical projection, it is advisable to analyse such works as J. S. Bach's Chromatic Fantasy and Fugue, Liszt's B Minor Sonata, L. van Beethoven's Moonlight Sonata, first movement.

'The coefficient 4, being a multiple of 2, gives too many recurrences of the same pitch-units since it is actually confined to but 3 units in an octave. Naturally, such music is thereby deprived of flexibility.

But the 5p expansion is characteristic of the modern school, which utilizes the interval of the 4th – such as Hindemith. Berg, Krenek. etc. Music corresponding to further expansions. such as 7p, has some resemblance to the music written by Anton von Webern. Drawing comparisons between the music of Chopin and Hindemith, under the same coefficient of expansion, i.e., either by expanding Chopin into the coefficient 5, or by contracting Hindemith into the coefficient 1, we find that the versatility of Chopin is much greater than that of Hindemith. Such a comparison may be made between any waltz of Chopin and the waltz written by Hindemith from his Piano Suite, 1922.

Comparative study of music under various coefficients of expansion reveals that often we are more impressed by the raw material of intonation than by the actual quality of the composition.

From Schillinger's book, The Mathematical Basis of the Arts, Philosophical 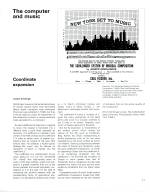