Baroness Elsa von Freytag-Loringhoven was once described as an artist who ‘dresses dada, loves dada, lives dada’. Here, 12 artists respond to her life, artwork – including one of the first readymades in art history – and extraordinary poems 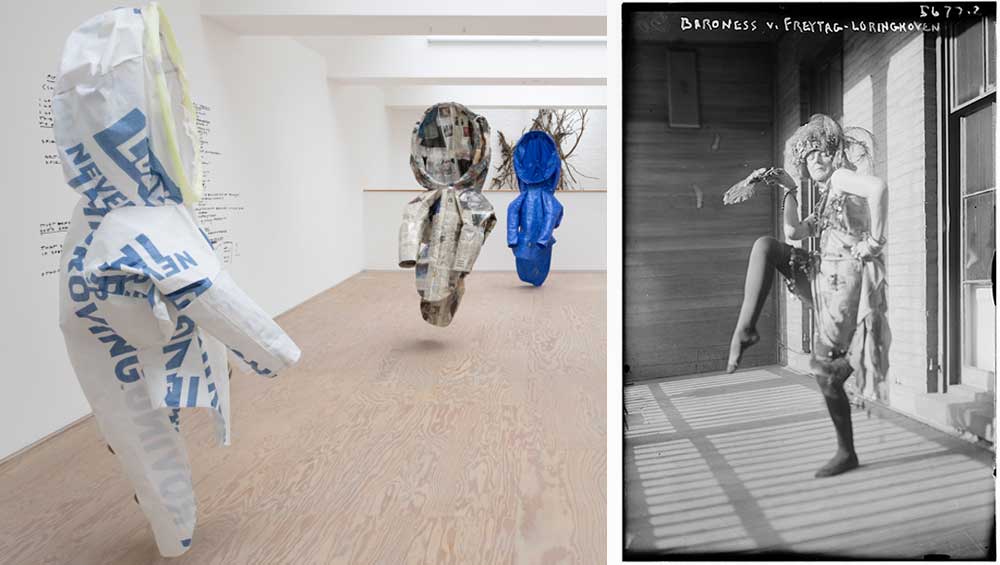 On 19 November 1913, Elsa Greve (1874-1927) – protopunk poet and performance artist – married an impoverished German aristocrat at New York’s City Hall. With this marriage, Elsa’s third, Baroness Elsa von Freytag-Loringhoven was born. On her way to City Hall, Elsa found an abandoned iron ring, orange with rust, which she titled Enduring Ornament to mark her (short-lived) nuptials. The bracelet-sized object, one of three small works by von Freytag-Loringhoven featured in The Baroness at Mimosa House, London, stakes a solid claim to being one of the first readymades in art history.

Mimosa House, a not-for-profit art institution that shows work by women, gender non-conforming and queer artists, with a focus on fostering intergenerational dialogue, presents 12 artists’ responses to Elsa’s work. The German-born Elsa, who became known in New York’s dadaist circles simply as “the Baroness”, poses a challenge for contemporary curators, because her life – wild, itinerant and relatively undocumented – really was her work. Jane Heap (1883–1964), Elsa’s editor at the Little Review, one of the few titles that dared to publish her incomparably radical poetry, described her as, “the only one living anywhere who dresses dada, loves dada, lives dada”. It is thus mainly Elsa’s spirit that the artists are responding to. Sensitive curation propels the woman described by poet Hart Crane (1899-1932) as a “lunatic” but “right about society”, firmly into the frame. Diverse in theme and tone, the show reminds us that a dadaist approach still holds significant merit as a response to life’s ills and absurdities. Along the way, it reflects on embodied subversion and the vagaries of history.

In 1910, Elsa moved from Berlin to New York, where she scraped a living as an artist’s model. She remained in material poverty for the rest of her life. Famed for incorporating readymade, often ephemeral, elements into her costume, she pioneered an avant-garde assemblage that centred her body. Signature looks, which she commonly took to the streets of Greenwich Village, included cancelled postage stamps worn on each cheek in lieu of makeup, gilded vegetables, a pack of dogs at her heel and a shaven head. Her biographer, the American writer Djuna Barnes (1892-1982), described her donning a giant, homemade, plaster phallus, which she would brandish at impromptu intervals at passersby. Her extraordinary poetry, meanwhile, with its strange syntax and elongated em-dashes, tackled typical dadaist concerns alongside the pleasures, injustices and uncertainties of life in a woman’s body. Against the backdrop of suffragist and birth-control activism in New York, Elsa ruminated on urban anonymity, consumerism, gender codes, women’s right to pleasure, ejaculation, orgasm, anal sex, venereal disease (“every cloud has its sable rim”) and sex toys (“no spinsterlollypop for me”).

Given the scant physical archive, and the Baroness’s foregrounding of her personhood, it is unsurprising that Mimosa House, like this year’s Venice Biennale exhibition The Milk of Dreams, has placed imagery of Elsa at the heart of the exhibition. In both London and Venice, Elsa towers over proceedings in performance mode. Slides at Mimosa House include an image of a naked Elsa strutting for the camera, which was probably taken during the production of a film made in collaboration with Man Ray and Elsa’s close friend Marcel Duchamp, in which she shaved her pubic hair. Next are some of the most famous existing portraits of the Baroness, taken by an International News photographer in 1915 and published only a decade ago, in which she poses, lunging or arms outstretched in DIY costume in a cluttered New York apartment.

British artist Sadie Murdoch (b1965) tackles the omissions in Elsa’s story, and art history more broadly, through a series of monochrome digital collages. Elsa’s distinctive silhouettes in the International News shoot are redacted in Murdoch’s reconstructions of the interior of the baroness’s clothes-filled home. Murdoch also makes use of scenes from the photography of Berenice Abbott (1898-1991), a friend of Elsa’s, famed for capturing New York’s avant-garde set, who neglected to photograph the Baroness (in 1924, Elsa wrote: “Forgotten… like this Parapluice am I by you – Faithless Bernice!”). In the shadowy collage, Pass-Way Into Where-To (2021), a phantomic Elsa stalks Abbott’s studio doorway. It’s an interesting and layered reflection on history’s subjectivity, as well as the building of an artist’s iconography; a century after her death, Elsa’s goofy poses, illustrations to a flurry of articles and exhibitions over the past decade, are becoming familiar even in silhouette.

The other two original readymades in the show are Cathedral (c1918), a wooden fragment representing New York’s skyscrapers, which touches on the dada concerns of man/machine, automation and industry, and Earring-Object (c1918), a steel watch spring and pearl earrings. The Polish artist Zuzanna Janin (b1961) responds to these small-scale remains – objects to be worn or held or tossed away – in kind. Asking how we might memorialise loss, mementos, photographs and scraps of matter are interred within epoxy resin spheres dotted around the gallery. In Janin’s Home Transformed into Geometric Solids (2016-18) series, building materials and detritus salvaged from her family home, which was destroyed by bombing in 1944 and rebuilt for her mother and grandmother after they had survived being transported to Auschwitz, are preserved. 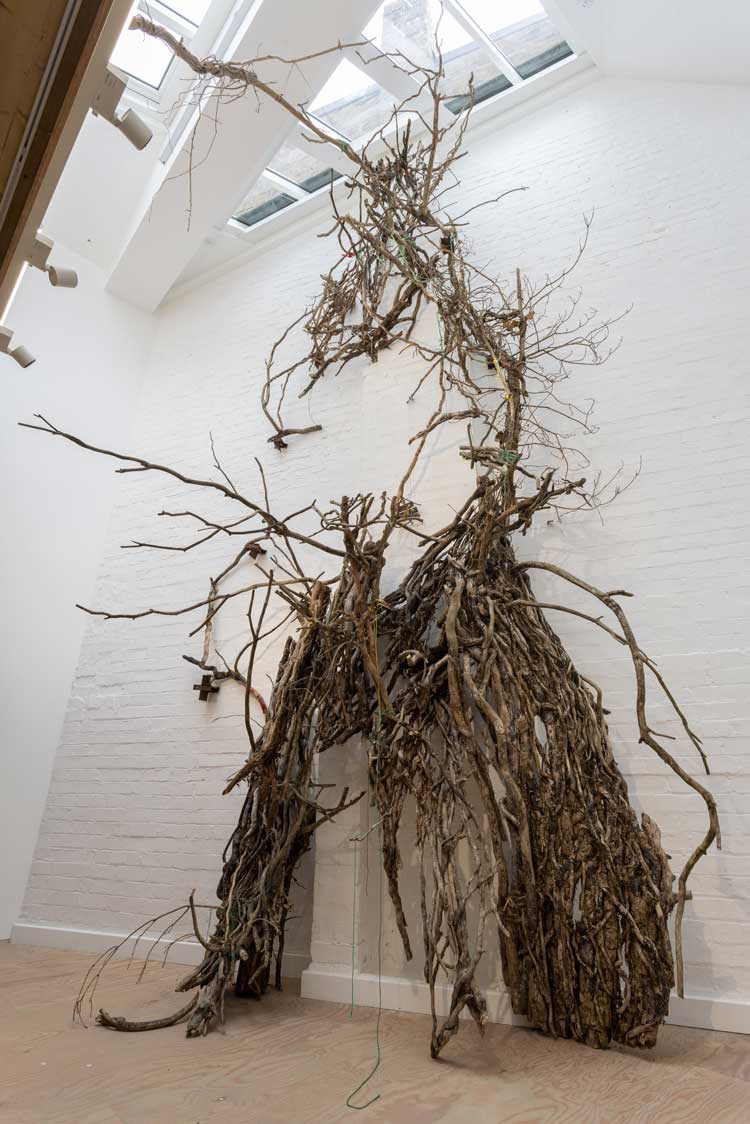 Linda Stupart’s Cathedral (2022) is a homage to Elsa’s readymade of the same name, its expansive scale befitting her ambitions, if not her means. Stupart’s assemblage of sticks and branches, collected from the banks of Birmingham’s River Cole, occupy the double-height section of the gallery, creating a shrine-like alternative to brick, glass and steel. Upstairs, Taqralik Partridge’s installation provides one of the most powerful moments in the show. A series of parkas traditionally worn by Inuit women (amautiit) are suspended mournfully from fine wires. Pointing to the precarity of life for Inuit communities, the amuatiit are crafted from offcuts of newspaper, tarp, plastic tubing and packing tape. Delicate silver teaspoons strung from their navels nod to Elsa’s use of cutlery in her costume. Clothing is political, Partridge suggests, and assemblage, reframing and recycling are helpful tools when faced with a hostile and rapidly shifting environment. 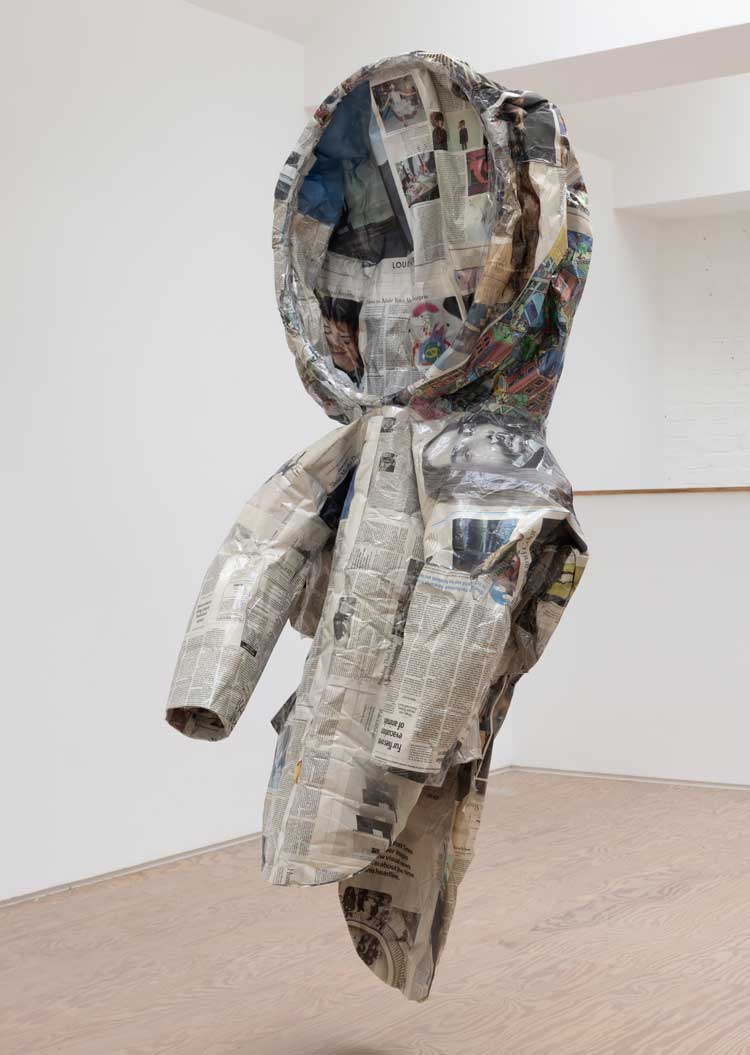 Maybury’s A-good-individual (2019), which greets viewers on their entrance to the gallery offers a rare glimpse of flesh in the show, playing on Elsa’s famed love of nudity but twisting the subject position. While Elsa described her performative poses as “aggressive — virile extraordinary — invigorating — ante-stereotyped”, Maybury presents us with body parts of five different submissive men, which combine to make a kinetic “exquisite corpse”. Backs to the camera, they appear small, soft and vulnerable, their voices awkwardly reciting poetry at Maybury’s request. The words of these cut-up verses are taken from misogynistic abuse she received during a tabloid media storm about her work as a dominatrix, who, reported the Daily Mail, in 2018, “focuses her unique skills on white, right-wing men in order to turn them into socialists”.

Elsa remains most famous for her purported authorship of Fountain, the urinal Duchamp submitted to the Society of Independent Artists in 1917. The battle over art history’s most famous readymade rages on (Dawn Adés, professor emerita of art history at the University of Essex, wrote to the Guardian on the subject last month), and Mimosa House handles the affair’s dominance of the conversation surrounding Elsa with suitable irreverence – its only reference, a projection of Fountain on the door of the gallery’s toilet. Hopefully, exhibitions like this will prove her relevance extends beyond the Fountain affair. 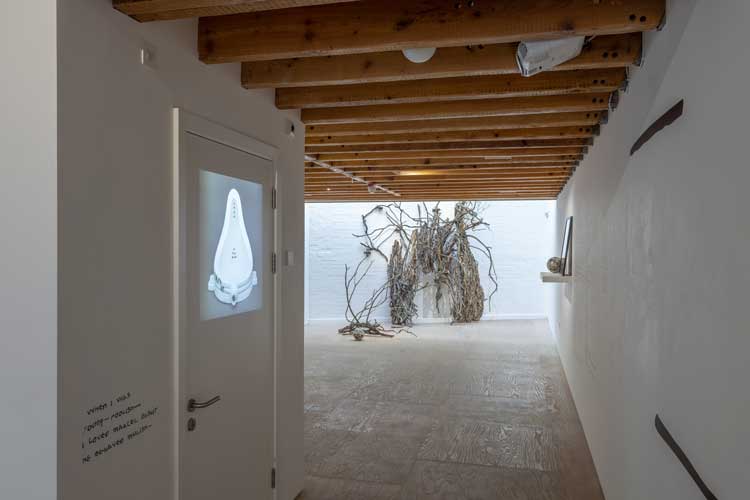 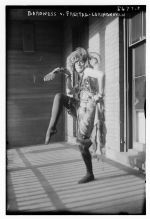