In this exhibition, which comprises three triptychs and two small standalone pieces, Jaray’s interest in the definitions of painting, printing and the boundaries between different media is clear 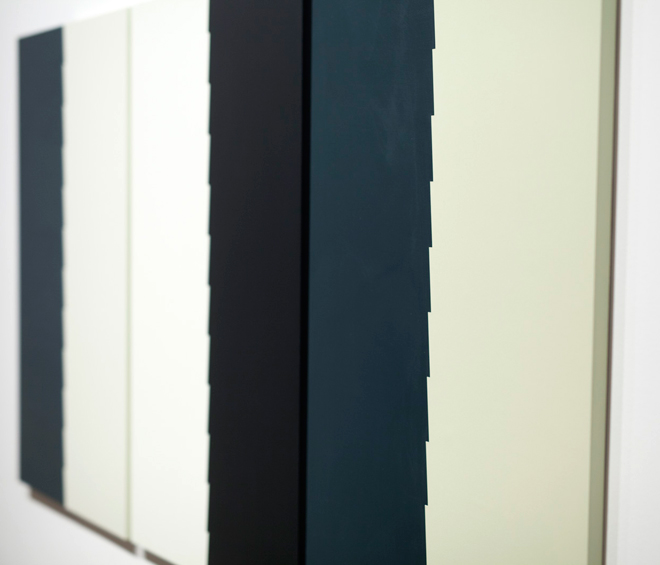 Hidden within the depths of Jermyn Street antiques dealership Harris Lindsay lies a compact exhibition of recent works by Tess Jaray, put on by Megan Piper to open her newly relaunched exhibition programme. You would be forgiven for missing it – Harris Lindsay does not possess a shopfront, and, picking one’s way through a beautiful assortment of antiques, it seems unlikely that a collection of Jaray’s minimalist abstract works lies in wait.

Harris Lindsay as a space is not unfamiliar with contemporary art exhibitions: in 2011, the dealership was host to Now & Then, an exhibition curated by Adrian Dannatt and featuring works by Pablo Bronstein, Alastair Mackie and Grayson Perry. It was clearly a successful formula as it was repeated again in 2012, with art from Adam Barker-Mill, Paul Benney and Babak Ghazi. For Dark & Light, the basement gallery space has been turned over to Jaray’s work, with an arrangement of Chinese porcelain and extravagant vases visible through a wide archway in the next room. It makes for a fascinating contrast that serves to elevate the simple, pure artworks on show.

Jaray was born in Vienna in 1937 and moved to the UK a year later. After studying at St Martin’s College of Art and the Slade School of Fine Art, in 1968 she went on to become the first female teacher at Slade, where she worked for more than three decades. Her long and distinguished career has seen her put on solo exhibitions at, among others, the Ashmolean Museum and the Serpentine Gallery, was made an honorary fellow of the Royal Institute of British Architects in 1995, and was admitted to the Royal Academy in 2010.

Throughout her career, Jaray has focused on geometry, colour and repetition, and the strange effects these patterns, often informed by architecture, have on our visual perception. These preoccupations are evidenced in her large-scale public commissions in London, including the terrazzo floor at Victoria Station, the Piazza at Wimbledon, and the Roof Terrace for the Arts Council headquarters. Here, however, Jaray restricts herself to more modest scales; this exhibition is a collection of three triptychs and two small standalone pieces.

In Dark & Light, each triptych panel contains two colours, separated by precise, jagged borders. When viewed up close, it becomes clear that these aren’t simply painted panels: Jaray has painted the background in one colour, and then screen-printed paper with the “foreground” colour before applying it to the panel. She has employed computer-guided laser cutting to create these exacting lines, which, ironically, resemble the unintentional pattern created when cutting paper with low-grade scissors. This process creates a tiny ridge between the two bodies of colour, within which one can see the suggestion of a third colour, that of the white paper or the shadow the paper casts on to the panel beneath. The repeating border between the colours thus sits ambivalently between two and three dimensions, painting and sculpture. Jaray is curating a joint exhibition at the nearby Royal Academy, The Edge of Printing, which runs until 23 October and is a survey and celebration of changing contemporary printmaking techniques. The title formulation is one Jaray has used before – in 2013, she curated a group exhibition at Megan Piper titled The Edge of Painting – and it is clear that Jaray is interested in the definitions of painting, printing and the boundaries between different media.

In First City, Light and Dark, we are presented with blocks of dark corrugated colour bordering on light green. There are slight shifts in colour between each panel, inviting the viewer to question the objectivity of natural light. Here the patterns almost resemble the wall of a building, set in profile against a milky green sky. The panels of Light Triptych, Blue with Dark resolve into two halves, light blues and near-blacks, and again, the variations in hue are incredibly subtle – what looks uniformly black from a distance reveals itself to be a jet black subsuming a dark brown.

In the triptych From Borromini, Jaray converges these choppy borderlines, creating three pillar shapes, inspired by the alternating triangular shapes of the balustrade in the Church of San Carlo alle Quattro Fontane in Rome. In an interview with The White Review, Jaray characterised her work as “what’s left when everything else is taken away”, and that minimalist philosophy couldn’t be more clear in this work; Borromini’s baroque architecture is synthesised into two-tone geometry, the paper ridges gesturing toward their architectural inspiration.

If the triptychs are works of a restrained palette, then the two standalone works on show here – Thorns 5 and Thorns, Purple and Green – are a riot of colour. While small by Jaray’s standards, they punch above their weight in the compact gallery space, offering vivid contrasts of deep blue and scarlet, purple and lime. Chevron shapes ascend and descend the panel, and in Thorns, Purple and Green their variance creates an optical illusion reminiscent of Bridget Riley’s work, the eye unsure whether to focus on the green arrow-like shapes, the purple rhomboids, or the rippling shift in colour from left to right.

Dark & Light opens Megan Piper’s relaunched exhibition programme, which presents and re-evaluates the work of British artists working since the 1960s and 70s. Piper was inspired to work within this distinctive niche after attending a 2010 exhibition at Birmingham’s Ikon Gallery, This Could Happen to You, a wide-ranging survey of the gallery’s programme in the 1970s. This subtle and rewarding exhibition marks a successful return for Piper, who has operated for the past three years without a physical exhibition space; she opened her first gallery in Fitzrovia in 2012, but it closed 18 months later when her backer pulled out. Hardly idle since then, Piper co-founded The Line, a sculpture walk from North Greenwich to Stratford and featuring a rotating roster of public works from the likes of Antony Gormley, Martin Creed and Damien Hirst. Piper’s programme for 67 Jermyn Street continues into next year with exhibitions of works from Edward Allington, Francis West, Paul de Monchaux and Neil Stokoe. 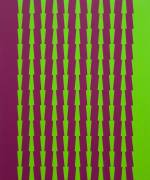