The Taylor Wessing Photographic Portrait Prize is now in its 11th year, and is as popular as it has ever been. Begun in 2003, it continues to crystallise the enduring appetite for absorbing depictions of individuals; being photographic, it promises an even deeper, more confrontational encounter with our fellow humans than can be offered by its equivalents in painting and sculpture. The 2013 prize’s 5,410 submissions by 2,435 photographers are further testament to contemporary artists’ faith in the photographic portrait as a fascinating, revealing genre of figurative art.

These are, at least, the assumptions that underpin the prize and the criteria of its judges, as well as its attendant exhibition. The four winners are deemed to have produced “an outstanding photograph that successfully transmits the circumstances and character of a sitter or group”, and there are 56 other portraits in the show that also fit this bill. Problematic, though, is the curator’s parallel insistence that “visitors to the exhibition first learn about the subject simply by viewing the image, regardless of the information that becomes available later”. Good photographic portraiture is defined here as that which can convey the sense of a person without the need to offer ideas or explanations, and where this can be achieved, it is certainly laudable. But very few of the portraits in the show manage to do so; in fact, the best works are those that have descriptive titles or wall texts that bring the sitters’ “circumstances and character” to life beyond the capabilities of pure aesthetics.

Is there much to be gained from this insistence purely on looking? The sparseness of information included in the exhibition’s labels, aside from very detailed biographies of the photographers, suggests so: it implies that conceptual details are a distraction, or even an embarrassment, or an indication of failure. Yet many of these works were produced in series rather than individually, with this show in mind, and with a thread that runs through them that is more than formal. For instance, William Lakin’s Martyn, Sean and Jacob (March 2013) is a triple portrait that could easily be misread as an allegory for small-town destitution (the fast food, the shopping bags, the mismatched clothing) if it weren’t for a brief accompanying sentence explaining that the photographer’s aim was to compare his sitters’ sartorial choices as expressions of their individuality.

By contrast, Three Colours Red (May 2013) by Tom Stewart appears to be a formal experiment with colour – two redheads with a ginger cat in an entirely green setting. It is visually stimulating, but fairly unexceptional. Yet the exhibition label implies a level of further significance that it then leaves frustratingly unexplored: “Stewart originally intended to make a moving image piece, but found a photographic portrait communicated the idea more clearly.” What is this idea? Has Three Colours Red, like Lakin’s portrait, had its symbolic or semantic qualities truncated in pursuit of “pure” portraiture? If so, this leaves us with the impression that the portraits of models and well-known people, of which there are several (including Lily Cole, Charlie Brooker, Oscar Pistorius and Vanessa Redgrave), are superficial experiments with light or visual cues or shortcuts to our knowledge of that individual’s persona without it having to be conveyed in the portrait itself.

The portrait that won first prize, Katie Walsh (March 2013) by Spencer Murphy, encompasses a little of both, which is perhaps what made it worthy of the £12,000 award. The jockey has been photographed immediately after finishing a race. Mud sticks to her face; she looks tired and concerned as she stares out at us with an air of the calm after the storm. It is a beautiful image, but it does rely on an explanation of Walsh’s “circumstances and character” to draw out the complete mental, emotional and physical exhaustion on her face.

Far more fascinating are the portraits in which the sitters actively intervene in, or engage with, their own presentation by the photographer in order to give narrative depth to the image. David Vintiner’s Lakshman Dongari, from the December 2012 series Recall (World Memory Championships), captures a moment in which the headphone-clad contestant attempts to remember a binary number more than 700 characters long. The room’s bare walls and cool colours reflect Dongari’s psychological control – his necessary erasure of character and circumstance – in order to achieve the presence of mind to complete the task at hand. In Beauty Recovery Room 01 (January 2012), Ji Yeo explores South Korean women’s desire to permanently alter their apparent circumstances and character by westernising their features through cosmetic surgery.

Similarly, in the two portraits depicting members of travelling communities – Sophie Brocks’ The Ward Family (November 2012) and Paul Wenham-Clarke’s Cindy & Shirley Aged Ten Holding Baby Terry on his Christening Day (May 2012) – every one of the sitters has taken pains to dress well, reflecting the importance of a certain glamour to these communities, even among the children, who are made-up to resemble adults. These are portraits within portraits: ostensibly, we are offered the individuals, shown as they wish to be seen, but beneath this lies a secondary focus on the very existence of that self-image – the emphasis on outward appearances that seems to preoccupy Travellers more than many social subgroups.

Such portraits imply that the individual photographs chosen for the prize are not themselves to blame for the now slightly archaic premise of their selection and display by the exhibition’s curators and the prize’s judges. The best photographs in the show have made the transition beyond “pure” portraiture to form semi-tableaux – partly aesthetic, partly conceptual – that indicate that a stilted, staring face is no longer interesting to an audience now accustomed to the animation, the ideas and the huge capacity for character brought by a snap-happy, globally networked society. We are no longer preoccupied with the human face’s contours and expressions as exemplars of human experience. We don’t covet representations of absolute emotion or consistency of thought and gesture. What we court is the variety and infinite changeability – “moments”, as Apple would call them – of which personality or character is the sum, but which can’t be expressed in one image of one person taken at one point in time. 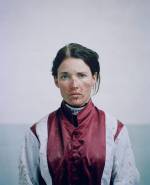 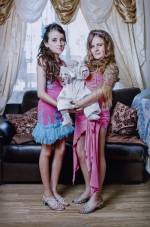