For three months in New York, and then at the Tate Modern, visitors will be treated to that increasingly rare phenomenon in museum show business – a teaching exhibition. A blockbuster, yet not, so bouleversé you may not be, but enlightened you shall

You thought you knew all about surrealism – in reaction to the formal logic of cubism and the nonsense of dada, a marking movement in time and intention that was launched and ruled from Paris by self-declared kingpin and poet-provocateur André Breton, whose impassioned manifesto of 1924 pronounced in or out those he deemed worthy or lapsed.

Don’t close the book there, this exhibition exhorts. Expanding on Breton’s mandates for surrealism as automatic drawing, improbable juxtaposition and the hallucinatory dreamscapes opened by Freud’s revolutionary revelations of the unconscious mind, this ambitious and scholarly survey intends to widen its scope and its practice. Tellingly, it achieves both something less and something more. 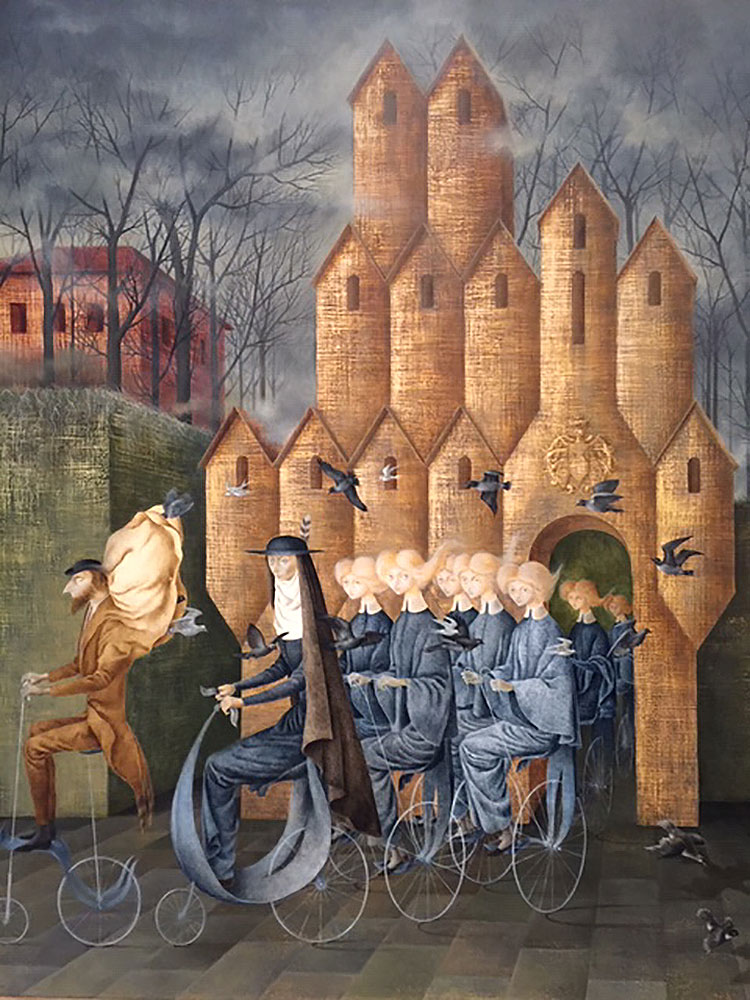 Inadvertently, however, this worthy resolve reveals a more radical scenario, one showing that surrealism’s psychic morphologies did not spring from whole cloth, nor even from Freud’s dream excavations, but rather from mining the same nightmares – war, famine and sexual deviance – that had roiled earlier times. Revealed here is a disruptive movement launched in Paris that awakened a Jungian angst across continents. Leonora Carrington, for instance, could not have single-handedly ignited surrealism in Mexico, as she is credited with doing, had the explosive subconscious of such as Remedios Varo and Frida Kahlo not provided the tinderbox.

In one of the ongoing artist manifestos, Egypt’s Kamel el-Telmissany announced: “Surrealism is not a specifically French movement … rather it is defined by the globalism of its thinking and actions … Have you seen the Egyptian museum? Much of pharaonic art is surrealist.” Recall, too, the ghoulish renderings of Hieronymus Bosch and Francisco Goya, the dreamscapes of Marc Chagall and Odilon Redon and, shown here in the looming finial ni-Vanuatu, the spirit figures of oceanic art. Even the most persuasive of interwar manifestos would have had a half-life if their psychic underpinnings hadn’t impelled artists across continents to give them expression. 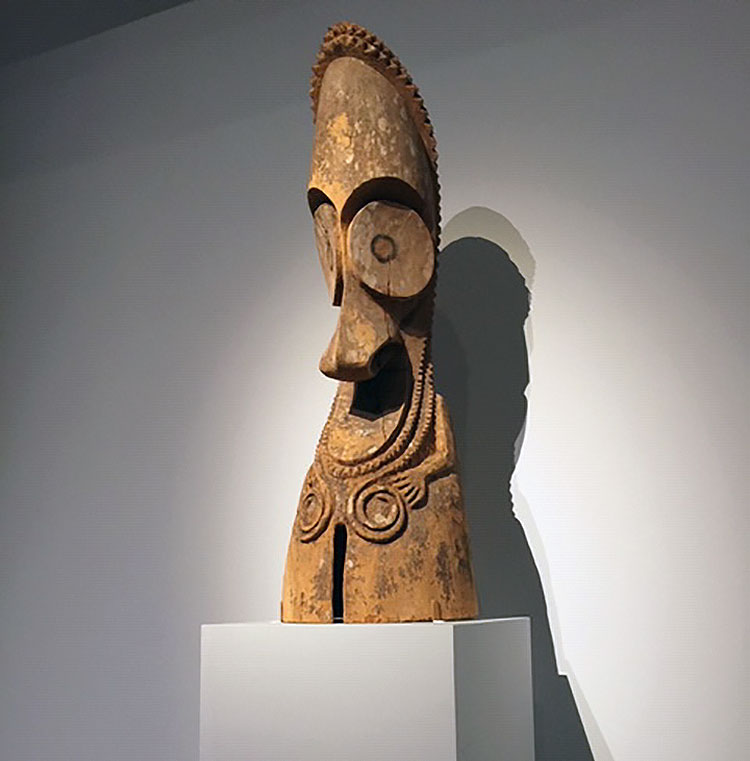 And expressive they were. From Argentina and Chile, to Ethiopia and Portugal, to Korea and the Philippines, artists mined the unconscious to challenge established orthodoxies and the Eurocentricity of modernism with a radically syncretic language of provocative forms manifesting absurdity, fluidity, chaos, perversion and inchoate irrationality. 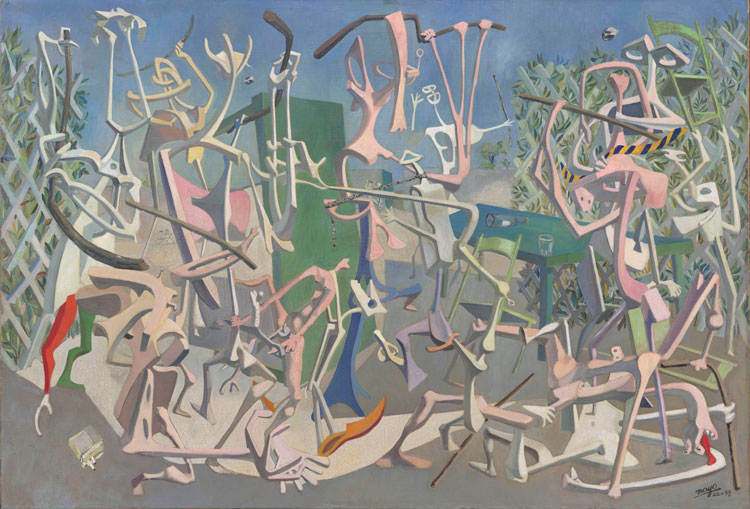 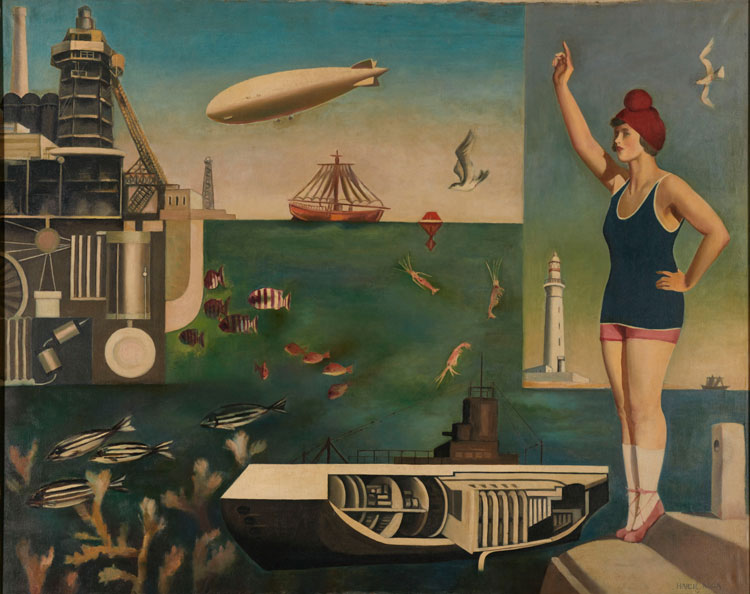 There is a mesmerising silent film composed by Ukraine’s Maya Deren), and many of the smaller canvases – their quarter-turn-off serendipity a welcome relief from the prevailing angst – are enchanting. 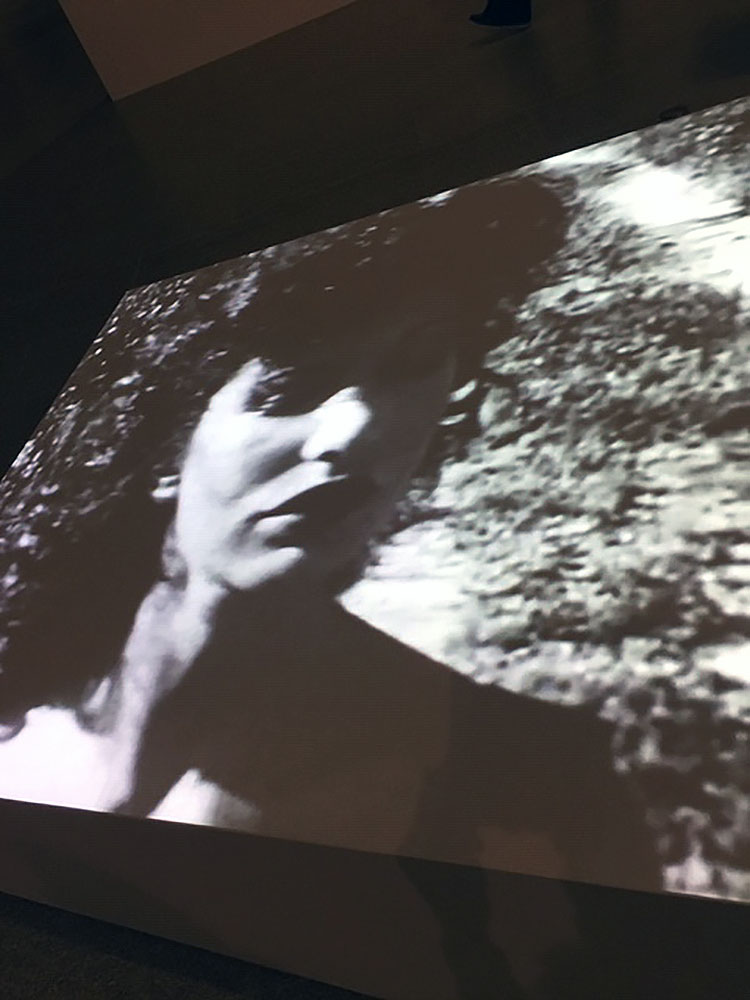 Among the enduring delights is Dorothea Tanning’s wilted sunflower (Eine Kleine Nachtmusik, 1943), and a few of the lesser-known paintings, such as the cryptic trilogy by Varo; the tangled bodyscape (Nus, 1945) by Egypt’s Samir Rafi; Night Flight of Dread and Delight (1964), interlaced with Skunder Boghossian’s African mystic spirit beings; and Koga Harue’s juxtaposition of disparate objects riffing on the industrialization of Japan (Umi. The Sea,1929) are remarkable. 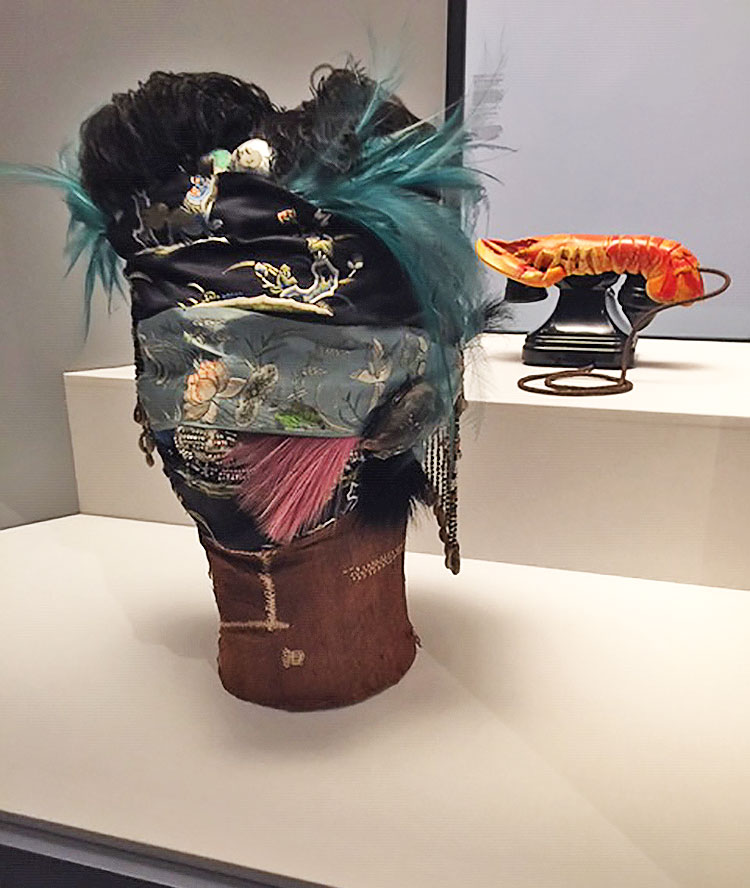 The sculptures, many unknown to me, held my attention. I was particularly drawn to Britain’s Eileen Agar’s uncannily contemporary plaster head Angel of Anarchy (1936-40), fashioned of shells, feathers, a dog skull and horsehair; Roland Penrose’s plaster and steel The Last Voyage of Captain Cook (1936-37); holding its own with a nearby Giacometti, a lilting metal and painted wood figure, Jucambe (1950-59), by Cuba’s great Black sculptor Agustín Cárdenas; and Frederick Kiesler’s Totem for All Religions (1947), a wooden, wittily-pieced corps exquis that echoes the Paris cabal’s folded-paper composites at the entrance. Wander into the last gallery, though, and it’s back to the schoolroom, with walls lined with annotations and documents to bolster the case for what is essentially a teaching show. With a few exceptions – poetic and urgent though they must have seemed in their day – these dated manifestos, hasty sketches and archival documents are now too removed, and for imperfect eyesight, inscrutable. 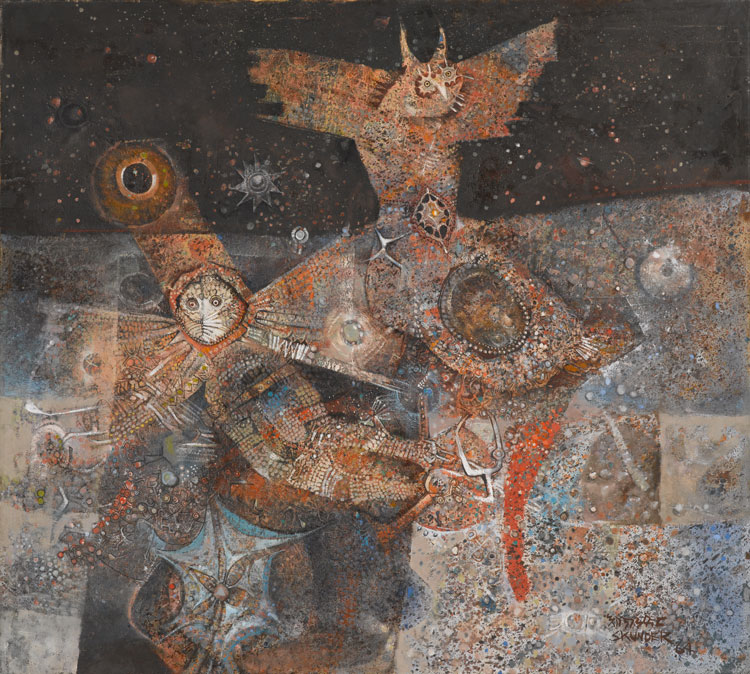 Disheartening, too – though no fault of the curators, since all art enclosed in a museum wants for oxygen – this careful presentation is sucked dry of surrealism’s spontaneous, psychic clutter and the wild eccentricities like that fresh-from-the-lobster-pot claw on Dalí’s famed telephone, of necessity remade for display out of rubber. 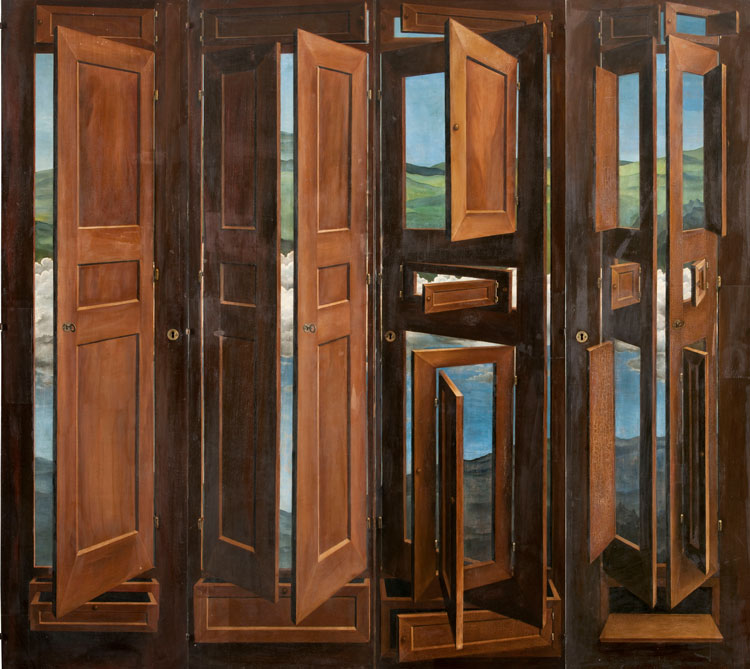 
Most dismaying, if you were hoping to revisit the icons, brace yourself for disappointment. Despite their avowed influence, there are only token nods to the Paris clique once held dominant. Yes, there is one great René Magritte (de rigueur given the debt owed him by such as Marcel Jean (Armoire Surréaliste, 1941), a vibrant Arshile Gorky, a superb chalk on fibre work by Cuba’s great exponent, Wifredo Lam, and one of Roberto Matta’s brilliantly executed “inscapes”, self-described as “the subconscious in its burning, liquid state; a conscious daytime substitution of the phenomenon of dreams”. But given the inclusion, for example, of nine works by Columbia’s Cecilia Porras (happily, all are good), why a mere handful of Joan Mirós, lesser Max Ernsts and paltry Francis Picabias? Why such a small example of Giorgio de Chirico’s major encryptions (Le Rêve de Tobie, 1917)? And why no André Masson of note and but a trickle of minor works by Picasso, the fertile pioneer crowned by Breton for the short time he “belonged”, whose direct influence is seen here in Byon Yeongwon’s masterful, Guernica-inflected Pangongyohan (Anti-Communist Female Souls), 1952? 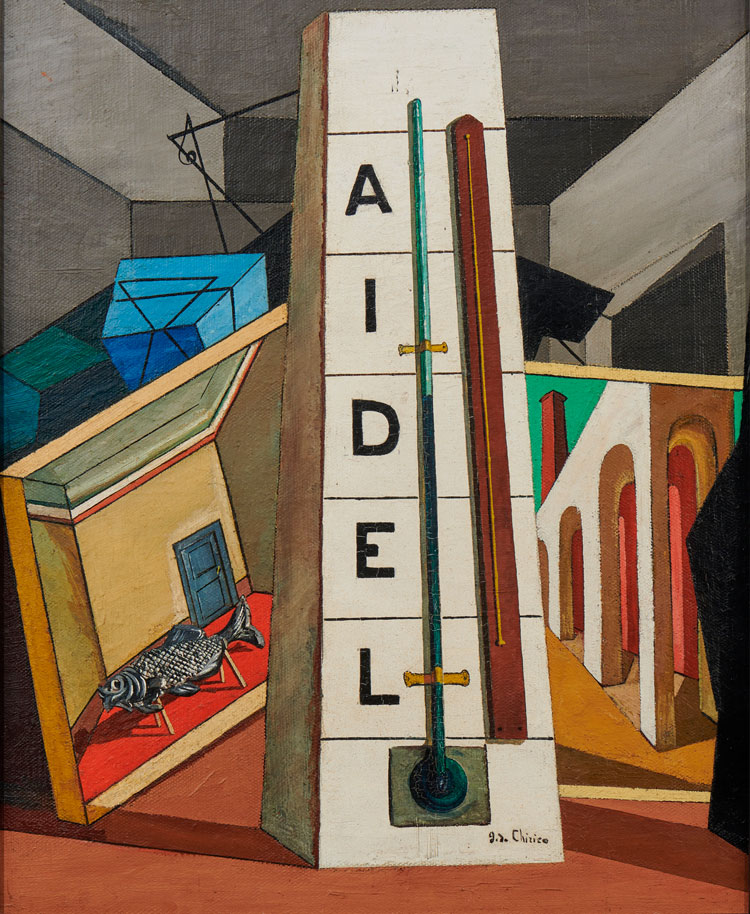 More incomprehensibly, largely diminished to journals, the impact of Marcel Duchamp, whose critical contribution to surrealism was, observed Breton, “the discovery of regions of space until then unknown in the field of art”. It would have been instructive, too, to drill down on Roman Catholicism, given the overriding influence of the church on such as Dalí (those nine portraits of Gala as the Virgin Mary) and the number of artists’ works here that play off Sunday parables absorbed from their childhood. Most confounding, why only one of those great paintings by Dalí, Construction molle avec haricots bouillis (Prémonition de la guerre civile), 1936), whose contribution Breton held foundational and whose deep influence abounds here (most directly in Ramses Younan’s Untitled, 1951). How, for example, given its longtime pride of place at the Met, was the Corpus Hypercubus (Crucifixion), 1954, not included? And how relevant would have been, given Dalí’s primal influence on America’s incipient surrealists, the meltingly sensual seven-minute film, Destino, made in collaboration with Walt Disney.

These caveats are subjective, of course, since the curatorial focus is declaredly on what is now called the diaspora. It is rewarding to learn that from the 1920s and through both world wars and long after, artists from countries as far-flung as Peru, Romania, Canada, Australia and Iraq were giving “body to a world in which logic plays no role” (Turkey’s Nurullah Berk); to the idea that “Sur-reality … is reality considered on a higher and better plane” (Hungary’s Európai Iskola); and, with automatism, to liberate “the mysterious moments” of human creativity, as the Syrian poet Urkhan Myassar phrased it, to tap into “what lies behind reality”.

Still, several entries here are stronger on message than talent. Illuminating that Mozambique’s Malangatana Ngwenya (Untitled), 1967, used surrealism to free the conscious from social strictures and colonialism, and that like-minded artists – many still students – in Puerto Rico and on, formed pulsing if short-lived collectives in the service of free thought and national liberation. Of the later groupings of stamped documents, political pamphlets and searing memorabilia, apart from a few gems, such as Baghdadi Abdel Kader El-Janabi’s collaged passport (Visa sans planète, 1981-90), they hold more intellectual than viewing value and, crowded together, look like a rummage sale.

More dismaying, their impact is cool, their cacophonous assemblage muted to bricolage. By the early 1950s, its shock value gone, surrealism had largely run its course – in the US, fervent acolytes such as Jackson Pollock and Mark Rothko had flung themselves headlong into abstract expressionism – and although the ocean-crossing tendrils that this show brings to light proved resilient, their impact on struggling societies remained local and, in developed nations, intellectual.

There is no doubt, though, about their lasting influence: you have but to lope down to the Jasper Johns show running concurrently at the Whitney Museum to see the unconscious plumbed and reworked, or revisit the weird beauty of Alexander McQueen’s sea creature gowns; Chen Zhou’s witchy films; Inka Essenhigh’s floated imagery that “just oozed out of me”, and the futuristic, archetypal, symbols animating the manifestos of German artist Jonathan Meese: “Art destroys all politics. Surrealism is the land of total power.”

Nonetheless, gone is the founding brief to “astonish me”. Shock being an element that cannot be revived, this exhibition relies rather on the proposition that the tenets of surrealism are newly relevant to a world of political, social, moral and pandemic upheaval. More immediately – credit creative curatorship – this exhibition is a major achievement, essential for anyone interested in art history and for its teaching value alone should not be missed. Just don’t expect your heart to pound. “Convulsive Beauty”, the title of the 1991 André Breton survey at the Pompidou, doesn’t apply here. It is doubtful that any one of the later works will grip you as one of Max Ernst’s did the ringmaster: “It moved us in a way we would never again experience.” Still, on leaving, it struck me that, had I given them more time, what had come across as a learned symposium might have morphed into a stirring séance.