Tune in to being a tree, explore the world through the ‘eyes’ of a potato … Rather than dwelling on our devastation of plant life and biodiversity, this exhilarating show offers constructive ways to connect with nature 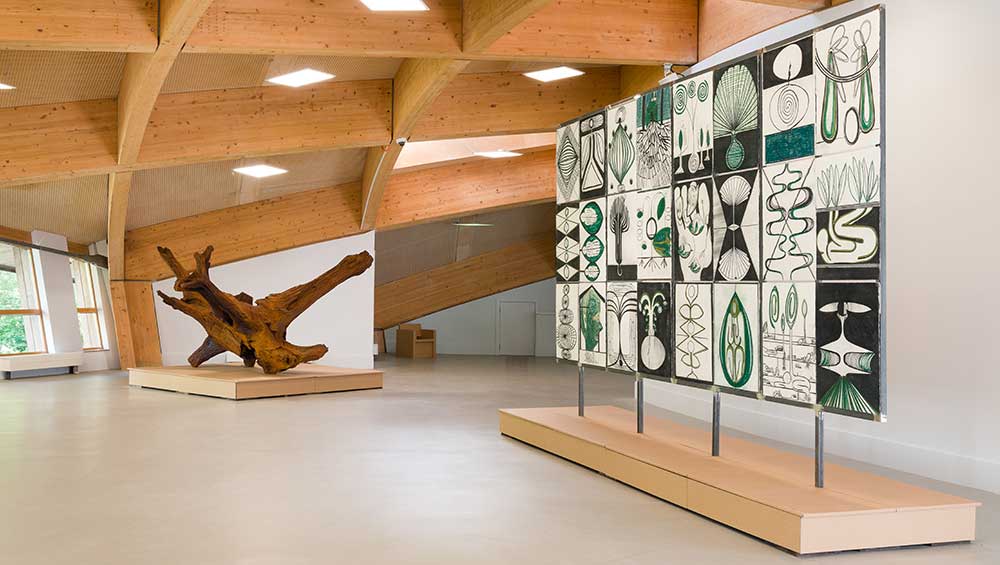 “Can you see with your skin and hear with your arms? Can you think together with the air and the sun and the soil? Can you dream with your feet?” The Eden Project’s excellent and timely group show Super Natural poses such questions, inviting visitors to reflect on what it might mean to commune with nature on a much deeper level. Featuring large tactile sculptures of seaweed, totemic altars to plants and an interactive artwork with potatoes, Super Natural is the Eden Project’s first contemporary art show since before the Covid pandemic and aligns closely with the venue’s mission of building harmonious relationships between people and the natural world to protect the planet.

The opening quote comes from a memorable audio work Vegetal Transmutation (2020), a collaboration between Argentine artist Eduardo Navarro and philosopher Michael Marder, the author of Plant Thinking: A Philosophy of Vegetal Life. Accessed through headphones, the piece at first feels like a meditation as the narrator tells you to “draw a cosmic breath with your whole body” but, in fact, it is about tuning in to the experience of being a tree. “Your fingers are roots and branches … One arm stretches tall. The other seeks deep in the soil. Span these extremes with your midsection, your chest, your trunk.” Some visitors may find this exercise of embodying a tree beyond their comfort zone, but many mythologies have envisioned human metamorphosis with nature. In Greek mythology, the most obvious is that of Daphne who was turned into a tree to escape the advances of Apollo. 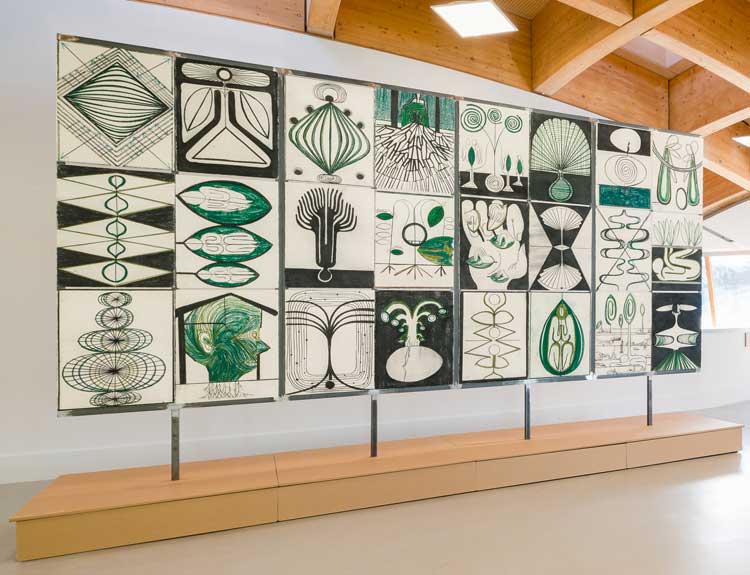 Navarro’s screen of 24 charcoal drawings, titled Photosynthetics (Fotosintéticos, 2021), gives the idea material form. In his organic hybrid shapes, leaves enwrap foetal bodies, heads grow roots and saplings sprout figures. Drawn on biodegradable paper envelopes, each containing a seed from a London plane tree, the works are intended to be buried to rejoin the cycle of natural renewal once they have completed their exhibition life.

In a similar vein is Chilean artist Patricia Dominguez’s 2021-22 video installation Matrix Vegetal, set within a totem displaying mandrake, a root used in ancient times for fertility and healing in childbirth. In her enchanting video, the protagonist undergoes a ritual cleansing of digital traces from her body in order to embark on a futuristic journey into a silent vegetal realm. A magic neon ring with an invisible digital touchpad serves as a portal to a plant dimension where she forms “a vegetal alliance” with the lush forest around. The imagery becomes increasingly otherworldly, as if viewed from the plants’ perspective; the  flowers are magnified so that petals encompass entire landscapes and we lose our bearings. 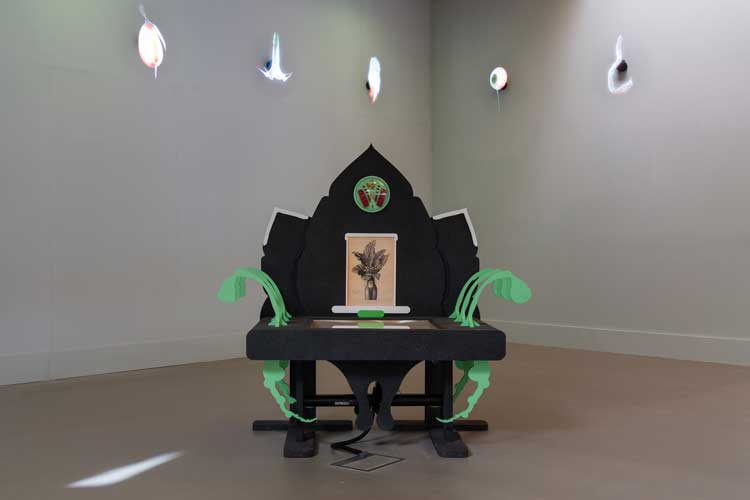 As part of her research, Dominguez spent a month living with a shamanic healer, Amador Aniceto, in the Peruvian rainforest and the project includes a video interview with him. Aniceto’s insights into the medicinal benefits of psychedelic plants such as ayahuasca and the inseparability of the plant and human worlds underpin the installation. This and the other works in the show endeavour to shift away from the humanocentrism that has dictated the west’s exploitative relationship with nature. 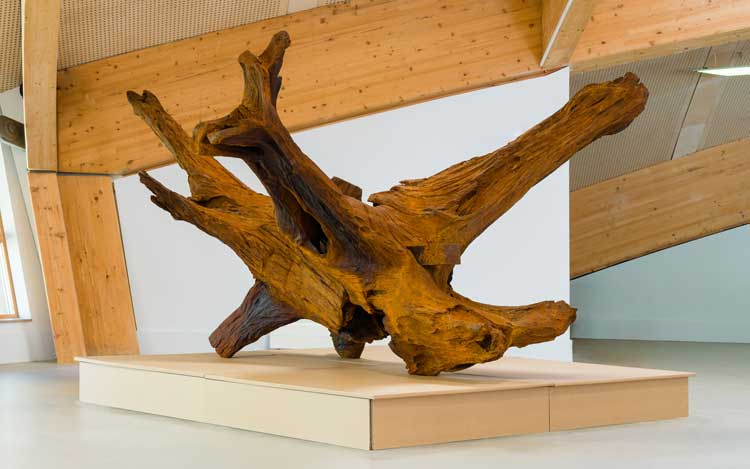 Staying in Latin America, Ai Weiwei’s 2019 iron sculpture Fly is a massive root of the endangered Brazilian Pequi Vinagreiro tree, cast in two pieces and joined together, resulting in a form that has something carcass-like and melancholic about it. The exhibition literature draws useful links between the theme of uprootedness, Weiwei’s own situation as an exile and the refugees he has documented.

Kedisha Coakley’s installation Horticultural Appropriation (2022), conceived as a cabinet of curiosities, also meditates on themes of heritage and roots. Displayed on transparent acetate shelves held together by delicate steel wires, miscellaneous objects such as passion fruit, lychee, tamarind, a cotton pod, oyster shells, volcanic rock and driftwood seem almost to hover in the air. Some are cast in bronze, others displayed as found. 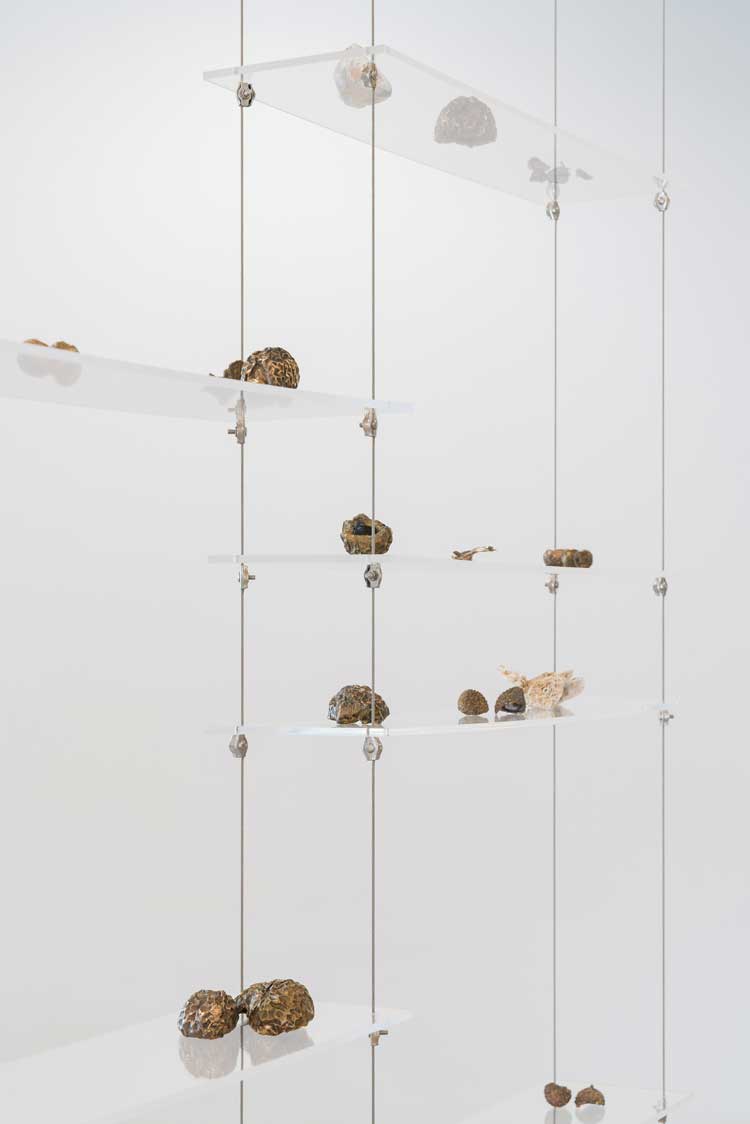 The work is titled after a 2021 pamphlet about the need to decolonise horticulture as is slowly happening with museum collections. What knowledge has been accrued by these objects, what effects have their displacement had? The cotton pod, for instance, may evoke associations with slavery, the British empire, the Industrial Revolution. Such references inhere in Coakley’s objects, but are equally layered with her personal memories, rituals and stories. 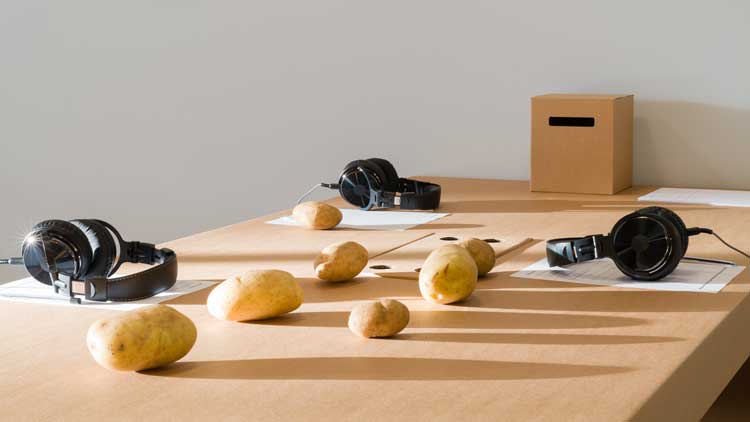 Iman Datoo, Making a Name. An interactive and collaborative artwork composed of audio instructions inviting participants to be inspired and derive new names for plants through non-verbal methods of interacting with a potato. Image courtesy Eden Project.

Iman Datoo is similarly concerned with provenance and extractivist colonial histories, but in this installation focuses her attention on one plant: the humble potato. Her 10-minute video Kinnomic Botany explores the world through the “eyes” of the potato, pondering its origins, associations, habitats and growth rhythms. Somewhere along the way, we have managed to drastically reduce the potato’s variety in our mania to classify, name and intensively harvest nature’s gifts. Datoo’s film is accompanied by an exercise with real potatoes titled Making a Name, a brilliant way of helping us to interact meaningfully with the tuber. Audio instructions guide you to stare into your potato’s “eyes”, write down its expression and an animal that its skin calls to mind. With those answers, you then create a name: mine was beige-wise-whale. “Together we have imagined a world where botanical names are allowed to become increasingly intertwined with our unique and personal interactions and experiences,” the narrative says. 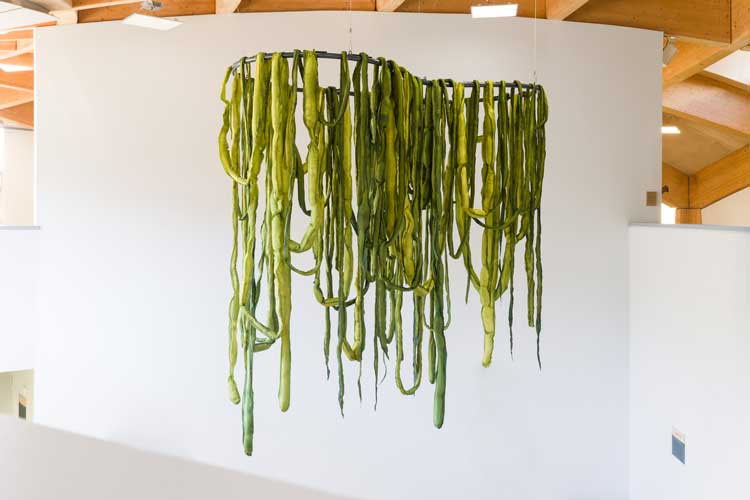 Swedish artist Ingela Ihrman highlights our affinities with plants; her two large-scale soft sculptures titled A Great Seaweed Day (2019) draw visceral links between seaweed and the body’s intestines. The first, Gut Weed, is a green mobile sculpture that dangles over the atrium in stringy loops, the second, Sea Belt, comprises dark red skin-like expanses hanging over a metal rail. The series title A Great Seaweed Day allude to entries found in the diary of Victorian housewife and marine botanist Margaret Gatty, who was a passionate seaweed collector.

Tucked away from the Eden Project’s main attractions, with views of plant-filled biomes outside, Super Natural is an exhilarating experience. Rather than dwelling on mankind’s depressing devastation of plant life and biodiversity, it offers constructive ways to connect with nature. You don’t even have to journey to the depths of the rainforest; these artists propose forming a “vegetal alliance” through a little imagination and empathy. Books like Peter Wohlleben’s best-selling The Hidden Life of Trees have taught us that trees live in communities like human families, sharing food, nurturing the weak and even warning each other of dangers through root signals. This show encourages us to focus on our similarities with plants rather than our differences, our mutual dependence rather than human superiority. While the audio and moving image works convey this most innovatively, the others add formal heft as well as variety to the show’s rhythm. Towards the end of Dominguez’s film Matrix Vegetal,the narrative voice is given to nature: “The Earth dreams through us plants and you humans. In those dreams we meet: plants, butterflies, meteorites, clouds, humans.” The challenge is can we make those visions a reality?